Why does my kid have to sell stuff door-to-door for her school? 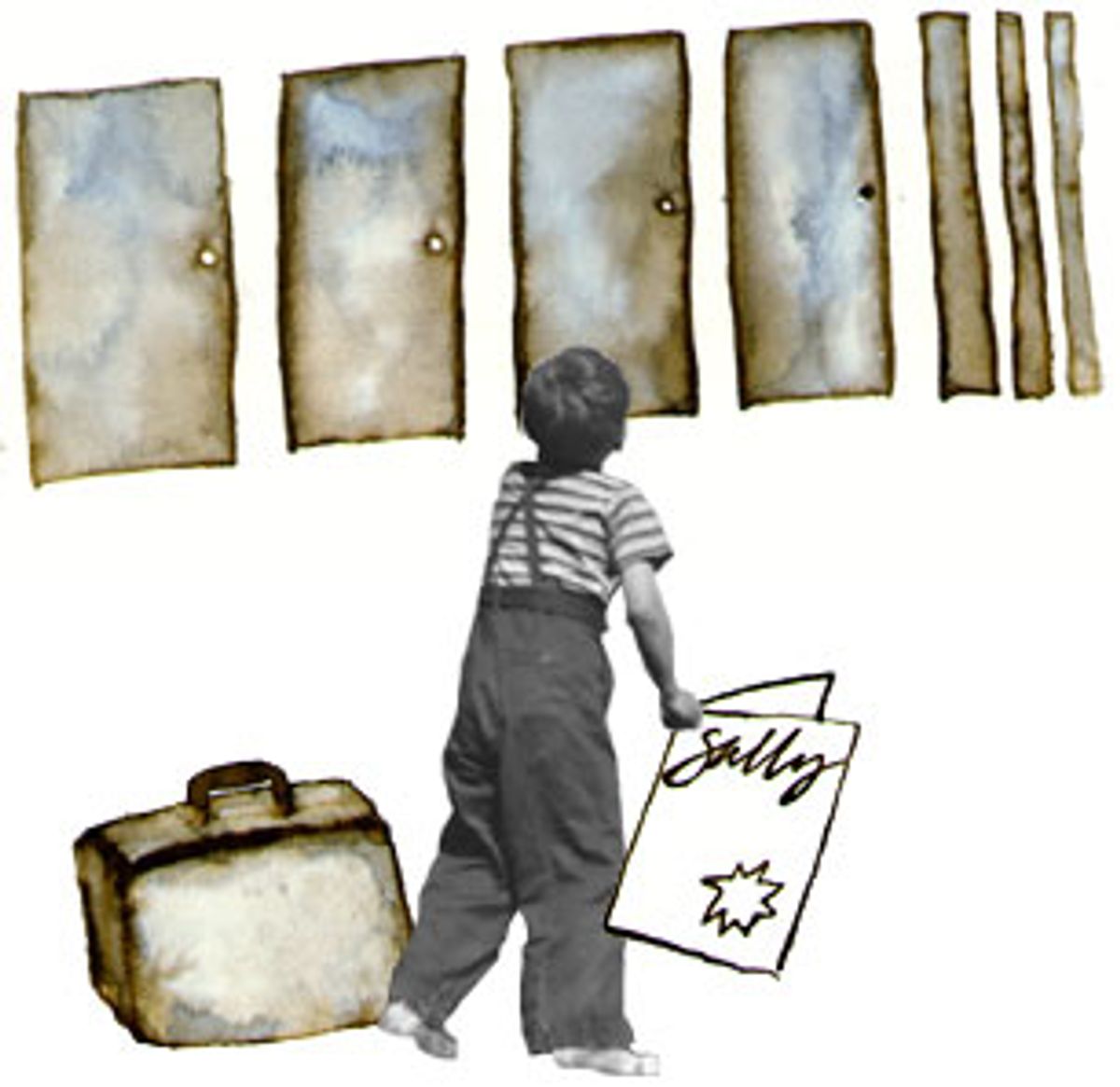 My daughter brought home a lot of stuff during her first week in kindergarten. Most of it was benign. But mixed in among the pleadings to join the PTA, entreaties to check the family pillows for head lice and a laughably unsavvy bit of propaganda about the nutritional hazards of soft drinks was something quite shocking.

It was a little package from Sally Foster, who is not the matronly school librarian but, rather, a division of Entertainment Publications Inc., a supplier of fund-raising materials that is itself a subsidiary of Cendant Publishing. In the package was a catalog of candy and assorted nuts, gift wrapping, picture frames, baubles, trinkets, doodads and other crap for sale.

Sally (we're on a first-name basis since I saw her mug shot on the inside front cover of the catalog) wasn't trying to sell me anything, at least not directly. It's much worse than that. She had recruited my daughter -- variously a budding veterinarian, cashier, paleontologist and cleaning lady -- to peddle her goods to others. As in door-to-door, in-your-face direct marketing. Mom, Dad, meet the newest member of EPI's corporate sales team -- your offspring.

Fresh off the turnip truck and my little girl had been enlisted by her school administrators to get out there and sell, sell, sell for the team. The money would be split, half going to buy the school new computers (don't get me started on that fiscal rathole) and half going into Sally's corporate-size apron pocket.

I almost cried at the thought of my sweet, towheaded little 5-year-old making a sales pitch to some slob who would answer the door in his boxers. "Hi. My name is Kori," she'd say in a practiced sales pitch delivered a little too fast. "I'm selling Sally Foster gift wrap so my school can buy new computers."

Mr. Slob would scratch himself and take a long pull on his Bud Light. Then he'd suck his generic menthol to the filter, stub it out on the top of the beer can and flick the butt over my daughter's head into the street. "Kid," he'd say, "I can barely keep up the payments on this trailer. How the hell am I supposed to buy you little snot eaters a new computer? You think life is so easy? You think people are just going to hand you stuff because you knock on their doors? Let me tell you what I had to do when I was a kid ..."

And he'd launch into a foul monologue that my daughter would be duty-bound to listen to because I've drilled into her that when adults talk, kids listen.

Most of my professional life has been spent studiously avoiding having to sell. This aversion stems from a singularly unpleasant day in college when, desperate for money, I took a job peddling Kirby vacuum cleaners to taciturn rural Minnesota farm families who needed a $1,000 appliance about as much as they needed a five-year drought.

My partner/trainer and I would put on a little demonstration of the machine's miraculous cleaning capabilities. When the families wouldn't buy, and none of them would, my partner would simply refuse to leave. During one particularly nauseating call, he kept up the pitch so long the family finally tired of showing him the door and went into the dining room for dinner.

Mom, dad and the kids ate their meal and ignored his increasingly bold harangue. ("Didn't you see how clean it got this carpet? Do you want to see it again? Don't you want to keep your house clean? You can't do it with the crappy plastic vacuum cleaner you've got now.") I stared out the living room window and vowed that I would dig wells in January with a garden trowel for a living before taking up sales again.

That was that. One day on the job. I've passed up many an opportunity since then to make two or three times my salary because I didn't want to sell. "The money's in sales," my uncle used to tell me. Maybe so, but I've got to live with myself.

And it's my job as a parent to impose all my own biases directly on my sweet, innocent girl. If, at the end of this vale of tears, my daughter turns out to be one of those people with a "Don't Even Think About Soliciting Here" sign on her front door, my job is done.

Sally is savvy to the potential P.R. problem caused by packs of bright-eyed kindergartners roaming unfamiliar neighborhoods. "At Sally Foster, safety comes first," reads the 1999 Chocolate Order Form. "Please, only sell to people you, your parent or guardian know. NEVER sell to strangers!"

This appears to be a concern, but is actually disingenuous in the extreme. Like bad parents everywhere, Sally offers a reward for performance. Any kid who sells even one item receives a worthless and silly poster of a space robot, a carrot so skimpy even my kindergartner could see it for what it was -- a ploy to get you further down the rewards list. That's where the good stuff is. Sell five items and you get a set of four glow-in-the-dark planets, estimated retail value: 29 cents. Twenty items and your lucky little sales boy or girl gets to choose from a glowing wind-up twister top, recyclables fun book or six clip-on animal buddies. Seventy items equals a radio that looks like a cell phone, and 100 nets a CD player with headphones.

Maybe I'm a pariah, but I doubt I could come up with 70 to 100 people for my daughter to hit up. Which means, for me at least, that Sally is talking out of both sides of her mouth. She implores my daughter to be safe, to sell only to people she knows and trusts, yet she offers rewards that can only be obtained by going well beyond the circle of people she knows and trusts.

Yes, this effort is supposed to be for the good of the school. But so are my not-inconsiderable tax dollars. If the school is that strapped, why not hit up homeowners for an extra mil or two on the old ad valorems? Is it really so politically unpalatable to talk of tax increases in America that we have to send our children into the streets to raise money for educational materials?

Not to mention the issue of compensation. At the average price of $9.80 per product, any kid who sells 100 Sally Foster items will gross $980. Split 50-50, that's $490 for the school, $490 for Sally. That same kid will receive a portable CD player worth, let's say $35, for his or her efforts. If those efforts amount to 10 hours, a conservative estimate, that kid is making $3.50 per hour. Last time I checked, the federal minimum wage was $5.15 an hour. Of course that doesn't apply if your workforce consists of 5-year-old kids.

All in all, a pretty cheap, effective way to market your goods. I must be one of the only parents who thinks so, though. I hear the school raised $34,000 with Sally's help.

Bob Whitby is a journalist who lives in south Florida. He doesn't have any swamp land he'd like to sell you.