The ballad of Luther and Johnny

In the jungles of Southeast Asia, 12-year-old twins lead a band of rebels. My twin sister and I got into trouble a lot, too. 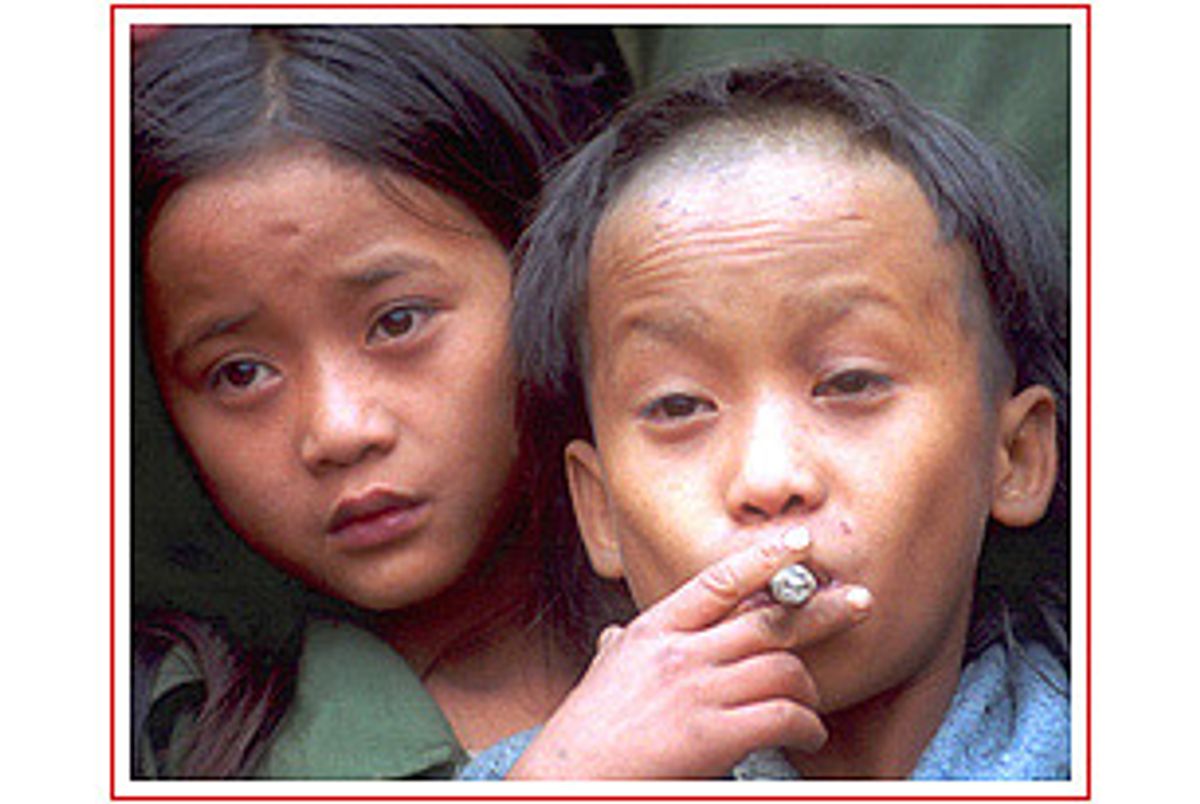 The picture of Luther and Johnny Htoo, 12-year-old twin brothers who command a ragtag guerrilla army in the rain forest of Myanmar (formerly Burma), is the first classic photojournalistic image of the new millennium. In the Associated Press picture, they are side by side. Johnny's the serene one with the angel eyes. Luther, forehead shaved, is the smirking devil sucking down a cigar. By early February, I couldn't open a magazine without seeing that picture of the twins, without reading of their bizarre cult of soldiers called God's Army, of their recent attack on a Thai hospital in which they held some 500 people hostage. And every time I saw the picture the first thing that popped into my head was this: I miss my sister.

I am a twin. And to be a twin child is to always have another person in the picture. My mother made a halfhearted stab at keeping separate photo albums for each of us. But the distinctions are arbitrary -- Amys in most of the faded black-and-white snapshots in my album, and vice versa.

Once I saw Luther and Johnny sharing the same frame, it hit me how much they have in common with my sister and me. The similarities are uncanny. Luther and Johnny are illiterate, Baptist, messianic insurgents struggling against the government of Myanmar, and my sister Amy and I shared a locker all through junior high.

I have a few friends who can't stop talking about the Htoo twins. They speak of them in a single breath -- LutherandJohnny. "Did you see the photo of LutherandJohnny?" or "I'm obsessed with LutherandJohnny." And I pine for that, that single name, especially now that my sister and I live so far apart. I miss the way I was never Sarah and my sister was never Amy, but we were together AmyandSarah. Unlike the identicals, who act as photocopies of each other, we're fraternal. Which means that we're not doubles so much as halves; we're split down the middle.

I'm a single careerist with a master's degree and walk-up apartment in New York; she's a married, pregnant, dog-owning baker in Montana with a, swear to God, white picket fence. People love that about us, love that I can't sew on a button but she makes quilts. That's why people respond to the Luther and Johnny picture. They adore the contrast between the pretty, girlish Johnny and the hyena-faced Luther. Meet Joan of Arc and her brother, Genghis Khan.

Will Luther and Johnny's memories meld? Up until around the age of 10, my sister and I often cannot remember who was doing what and who was watching, who got thrown from what horse, who got spanked for what trespass, who committed the trespass that led to the spanking. (Well, it was usually Amy, so ill-behaved. When I called her to talk about Luther and Johnny, she had seen the photo and knew what I was thinking. "Im Luther!" she screamed into the phone.) So years from now, when Luther and Johnny look back on this exciting terrorist period of their lives, will Johnny ask Luther, "Was it you who threw that hand grenade on the government sniper or was it me?" Maybe Luther will tell Johnny, "Help me out here, but I can't remember which one of us shot the papaya off that dumb orphan's head."

In some ways, out there in the killing fields, Luther and Johnny have it easy twin-wise. In the bush, they don't have to deal with the aftermath of those periodic cable TV documentaries on twins. They've probably never been cornered at some dinner party by a subscriber to HBO who needs to quiz them, in a single breath, on "like the weirdest show I've ever seen about these freaks, I mean twins, who were separated at birth and everything and still held their cigarettes at the same angle even though they didn't meet until adulthood and I was just wondering if when your sister feels pain you feel it too?"

So Luther or Johnny will never have to hover over the lukewarm hummus and inform some only child that just because you're a twin it doesn't mean you're some kind of life-sized voodoo doll and that if you have some kind of psychic powers at all they have nothing to do with your twin but rather peculiar celebrities like when you dreamed you said hi to Kevin Spacey on the street and the next morning he received an Oscar nomination or the fact that you happened to be talking about former Dallas Cowboys coach Tom Landry the night he died.

(Another dignified plus of being a twin without television is that Luther and Johnny have probably never watched the cartoon "Super Friends," the one in which Aquaman and Superman and Wonder Woman teamed up to fight global crime. And thus, Luther and Johnny, unlike my sister and me, will never have to cringe at the memory of imitating the goody-goody, tights-wearing minor characters known as the Wonder Twins. Thus they'll escape the embarrassment of having said the words, "Wonder Twin powers, activate! Form of ... a straight-A student.")

The advantage of being a 12-year-old guerrilla warrior in terms of twin self-esteem is not unlike the advantage of attending a private school -- the uniforms. As American public school graduates, my sister and I know the trappings, the symbolism, of clothes. As toddlers, our mother dressed us alike. And if we weren't wearing the same dress, we wore the same style in different colors. If she wore baby blue, I wore pink. If she wore navy blue, I wore red. Until the moment when we were maybe 5 and Amy informed our mother, "Mama, I don't want my dress to be like Sarah's."

In high school, she wore blue, I wore black. She wore pink and I wore black. Luther and Johnny, in their makeshift camo, will never go through that, the stereotyping, never know what it's like to be labeled the gloomy, plain Jane or the girly-girl blond. Then again, they won't crack themselves up by being the gloomy plain Jane and buying a red satin dress in front of Mom, just to see the look on her face. On the other hand, AmyandSarah will never know the satisfaction of a job well done that comes with leading an army of children to certain death.

Someday, when Luther and Johnny are older -- perhaps in exile -- they'll flip through their photo albums as my sister and I do at Christmas. Will they look fondly on the smoker/nonsmoker snapshot the way we giggle over the Polaroid from 1974 in which Amy has thrown up on me in bed but I slept right through it and she thought it so hilarious she woke up my parents to get the camera and there she is, in color with the light on, smiling and pointing as I lie there peacefully, my Snoopy pajamas soaked in puke?

Or the Sears portrait when we're not yet 2 and I am blank and placid on the shag carpet fondling a plastic football and Amy's fidgeting glare, the light bouncing weirdly off her hot tears? Or perhaps Luther and Johnny, who reportedly cannot read, have never seen the photo and never will and so they'll be less inclined to stereotype each other the way everyone else does, the way I was the dark one and she was the blue-eyed blond, the way I was the smart one and she was the fun one even though she's really sharp and I'm not a total drag.

Maybe, unlike someone who shall remain Amy, Luther is too caught up with training his blindfolded child followers in disassembling rifles to taunt Johnny with the fact that he was almost 8 and still had training wheels on his banana-seat pink bike even though he, Luther, had been riding in the driveway solo since he was 4.

At 12, Luther and Johnny probably already suspect twindoms secret lesson: Namely, that no matter what they accomplish -- who they train, inspire or kill -- their greatest allure might be the circumstances of their birth. That to be a twin and to distinguish oneself besides is a bit of overkill. My sister and I were about their age when our family moved north.