The pundit and language columnist crafts a potboiler of sleaze and slander in the republic's infancy. 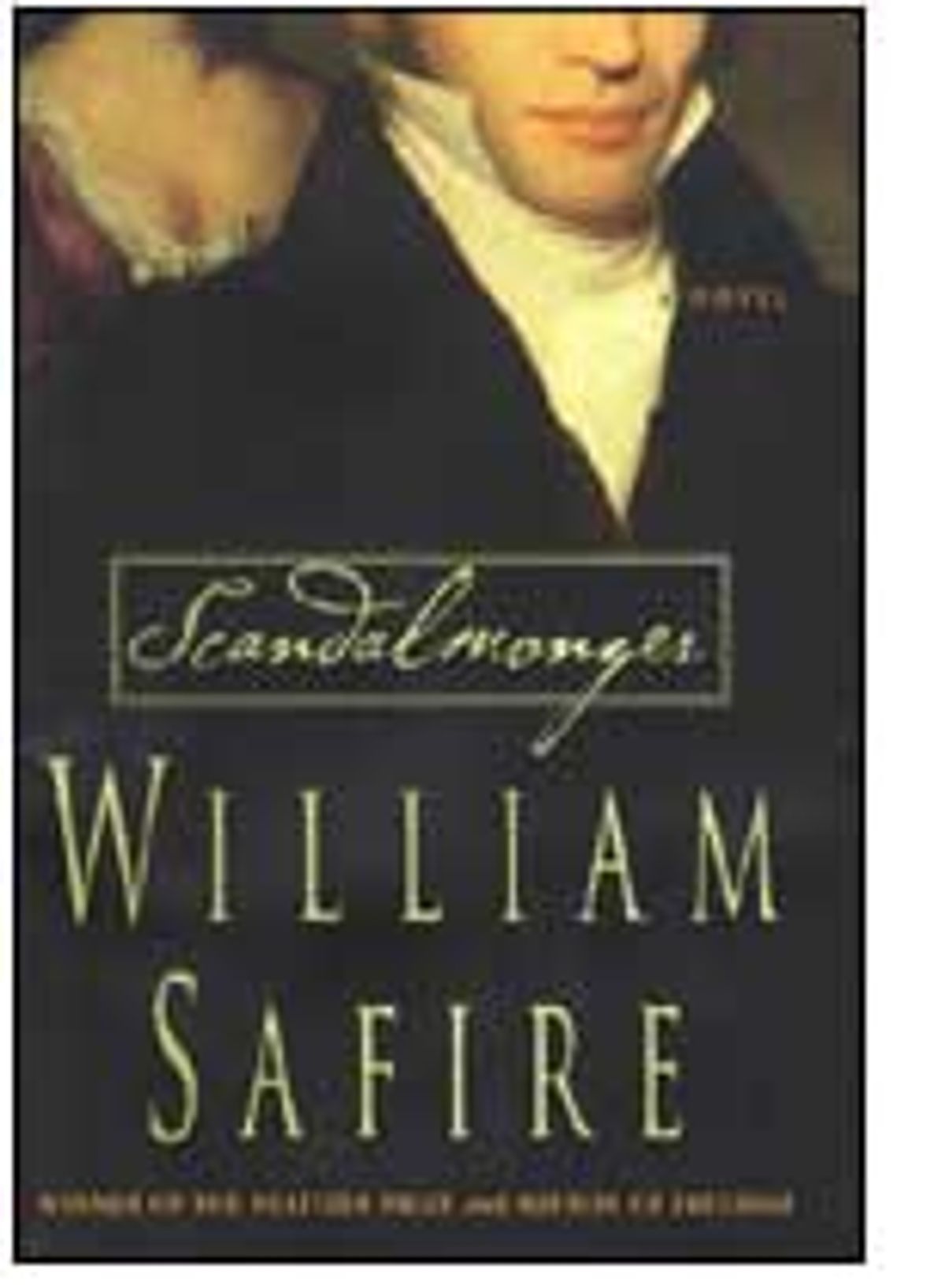 Which William Safire do we get? The word maven, mais oui. In "Scandalmonger," an uneven demifictional tale of the nation's early calumnies and tabloids -- think the Gap dress and the Keating Five of post-Revolutionary America -- the New York Times "On Language" columnist lets fly often and fervently. "Jacobin milksop," he knights the clerk of Congress. "Flagitious," Alexander Hamilton says of the Adams regime (Middle English for "infamous," in case you wondered). "Petty popinjay," John Adams is pegged.

Nice. Indeed, "petty popinjay" is alliteratively worthy of the former Nixon administration speech writer's famous "nattering nabobs of negativism." But these sundry vocabulary builders do not make up for the patchwork feel of "Scandalmonger." Safire is no Patrick O'Brian -- this is not a seamless immersion into a bygone era. It's more a sort of subpar George Bernard Shaw play, in which the characters exist mostly to advance the era's ideologies and debates. That's not a bad thing; the book compels, but less as a polished work and more as really fine scaffolding.

And what are those ideologies and debates? Republicans vs. Federalists and Freedom of the Press vs. the Alien and Sedition Acts, as prismed through four scandals spanning the years 1792 to 1803. This quartet leads off with Hamilton's sexual and fiduciary shenanigans, then moves to the unconstitutional imprisonments under the Sedition Act, revs up to the rumors of a liaison between President Jefferson and his slave Sally Hemings (one tabloid subject crows that her son Tom bears a "sable resemblance" to the other Tom) and caps it all off with the trial that established the concept of malice as the cornerstone of libel law. The players? Hamilton, Adams, Burr, Madison, Monroe and Jefferson, plus such lesser-known luminaries as Vermont congressman and newsman Matthew Lyon -- dubbed Spittin' Lyon after he hawked one in the face of Connecticut Rep. Roger Griswold.

Is there a Deep Throat in all this? Indeed: The novel's prime leaker is a congressional clerk named John Beckley, whose job of copying sensitive papers allowed him to unsettle lots of muck for the raking. (If not for Beckley, Hamilton might have been our third president.) All these characters are diverting, but "Scandalmonger" is most taken up with two men eminently gifted in, as Safire puts it, "the poetry of slander": William Cobbett, a Federalist pamphleteer pseudonymously known as Peter Porcupine, and James Thomas Callendar, a Scots-born ink-stained republican gadfly, aka Timothy Thunderproof. Callendar is the eponymous one, "a dark spirit who chews the cud of his rejection," as Safire writes. A pre-presidential Jefferson, it seems, used Callendar as his attack dog; the Virginian even sanctioned the Scot to strew "papershot," as Safire artfully calls invective, against George Washington, something no politician could do in public and expect to survive. Callendar's reward? Upon gaining office, Jefferson disavowed him -- only to have Thunderproof storm his revenge in print. (He was a prime spreader of the Sally Hemings story.)

Oh, yes -- there's another girl in the book. Quite a girl. She's the beguiling Maria Reynolds, the "statuesque" and "near-violet-eyed" mistress of both Hamilton and Burr and the Monica of the 1790s. Safire even winkingly calls her "that Reynolds woman." The Maria stuff is quite fun in both a laugh-with and laugh-at kind of way; let's just say Safire is no Jacqueline Susann when it comes to boudoir prose. Burr, for instance, is "discreet and controlled, taking his time, with incredible stamina in his lovemaking, watching in the long looking-glass." Hoo!

Things go better when Safire cites primary sources (which, to his credit, he does often). For example, Adams on the ever-randy Hamilton: "A superabundance of excretions." We've acknowledged Safire the wordsmith. What of the amateur historian who wrote a novel on Lincoln called "Freedom"? At its best, "Scandalmonger" shows off this Safire's gusto for research; we learn, for example, that no one shook hands then, in the belief that the act transferred yellow fever. In addition, we're afforded "The Underbook," a 43-page afterword that spells out what's fact (the bulk of the story) and what's fiction (the often ill-advised plot devices, especially a goofy affair between Callendar and Maria Reynolds).

In the end, the Safire who is most in evidence is the Pulitzer Prize-winning political columnist. "Scandalmonger" pretty much fails in character development and pace. But it redeems itself through the author's greatest strength: his ace powers of synthesis. The quandaries of the day are crisply laid out. "Hamilton thinks that man's nature is evil and that he needs strong government to control his passions," Safire writes. "Jefferson sees man as essentially good and needs to protect his freedom from the monarch's domination. From that flows all the dissension of our time." Well said.