Stay-at-home moms chase pocket money and "a life" through a revived home-party selling industry. The overhead is low -- and so are their earnings. 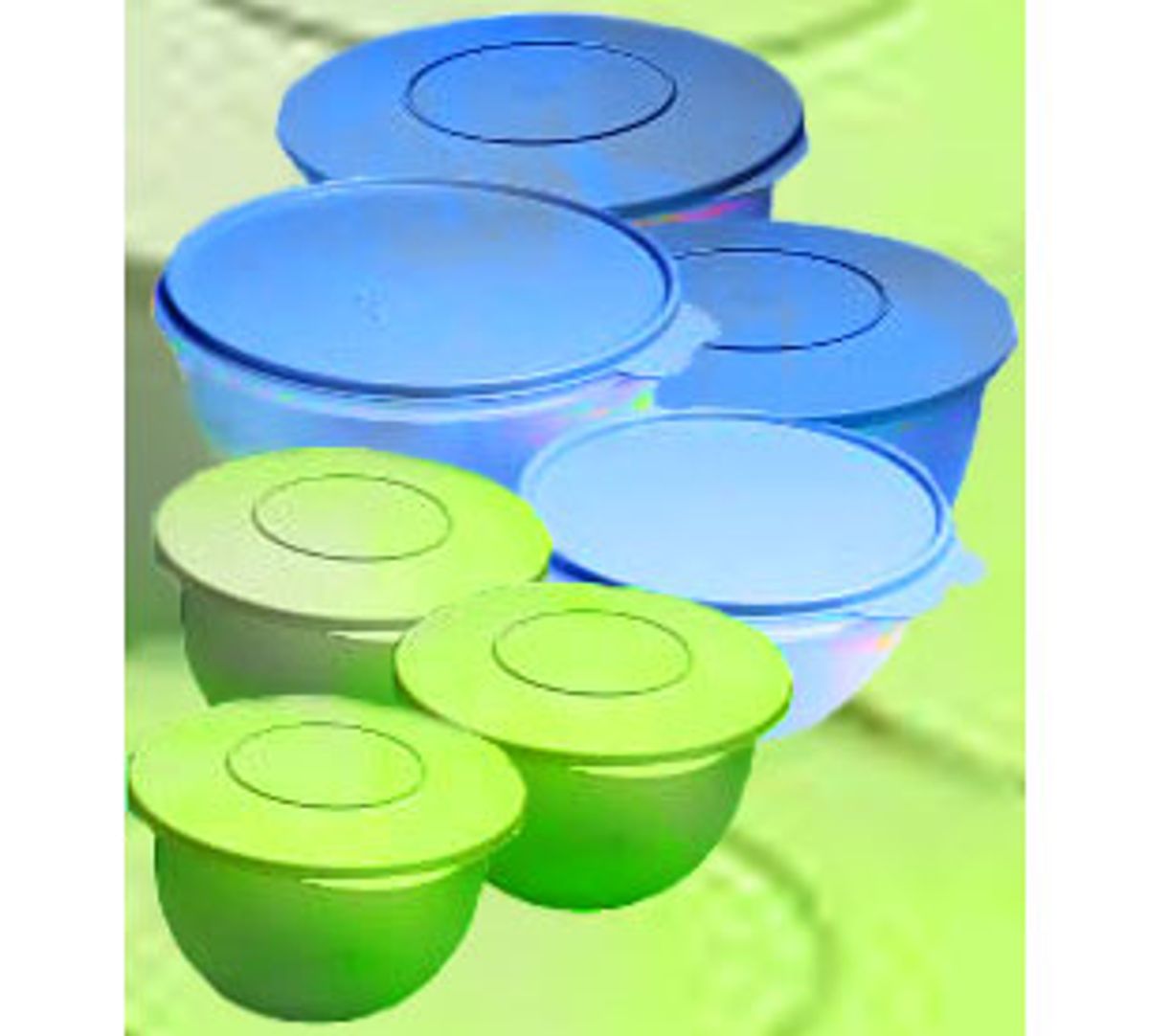 Hey, everybody! Get out your wallets and check your friendships at the door! Home-party selling is back!

And no one is safe.

Looking slick and very pricey, direct sale products are lurking again in the suburbs of our land, where stay-at-home moms hungry for adult contact and extra income now push bakeware, educational toys and other products to friends and neighbors.

Working on a commission-only system, the women are bringing huge profits to a group of companies that use a pyramid-like sales structure to keep them supplied with fresh, unsalaried labor despite rapid turnover.

While statistics show that the odds of financial success for the women who sell are slim, the promise of cash and "a life" remains seductive. These days it is hard to find a mother at home who isn't selling or being pestered to buy Discovery Toys, DK Books or the baking stones, apple peelers and marble rolling pins of the Pampered Chef, which employs an army of "independent kitchen consultants" to sell in living rooms across the nation.

For companies that sell this way, business has "been on a steady rise" for the past decade, says Amy Robinson, a spokeswoman for the Direct Selling Association, whose 150 members include the Pampered Chef; Creative Memories, a scrapbook company; and Discovery Toys; as well as Amway Corp. and Tupperware Corp.

While there are no figures on the exact percentage of stay-at-home mothers in the direct-sales workforce, they are believed to constitute a majority. Nearly four decades after Betty Friedan urged middle-class women to find fulfilling work outside the home -- whether or not it was financially necessary -- stalwarts of the stay-at-home camp are digging in deeper, looking to supplement family finances while keeping a commitment to be at home with the children.

Direct-sales companies are keenly aware of this dilemma and have made "home business" more attractive than ever, especially to women strapped not only for cash but for a challenge of greater complexity than doing the laundry. The companies talk up fun, friendship and financial independence, and the system they rely on is familiar to anyone (perhaps everyone, at this point) who has had a brush with Tupperware.

Here's how it works: A group of women -- usually stay-at-home mothers -- gathers for a "party" at one of the women's houses, where a "consultant," trained by tapes from her network marketing firm, demonstrates sample products and makes a presentation.

Her show begins with a pitch to her friends to host similar parties. It is a fervent request, often in the form of a testimonial about the benefits of working for the company, that is inspired by the fact that the consultant can only hope to make decent money if she gets a lot of women to sell for her, at which point she gets a percentage of their sales.

Next comes a demonstration of the product (a Pampered Chef consultant will whip up a few dishes using the company's equipment, for example) and a catalog is passed around in an atmosphere of guilt disguised by cheerfulness. Orders -- and checks -- are given to the consultant, who has the goods shipped to the party hostess for sorting and distribution.

The hostess, in return for her trouble, gets a discount on the products she orders. The more the guests order, the more merchandise she gets -- so there's an unspoken agreement that everyone has to buy something. For the consultants -- and the companies -- the real money comes from referrals. If a party attendee hosts her own party, with new friends, the company gets more potential customers.

"It's hardest when you have a friend who's selling these goods, because then you can't just buy something and be done," says one veteran of the circuit who has been to five of the parties in the past year and declined invitations to another two. "You feel totally obligated to have a party, and then you just pray that your saleswoman friend isn't too pushy to your other friends and neighbors. And then you feel bad for inviting the others, since you know they'll feel like they have to buy something."

The products don't come cheap. Pampered Chef, for instance, sells items comparable to those found in Williams Sonoma and major department stores. "I really think I could find virtually everything these parties sell for less in the regular retail market," says party veteran Michelle Cortez of Maple Grove, Minn. (At one party, a DK Books consultant was at a loss when asked to explain why Price Club was selling the same books for half the price. The answer: Price Club doesn't carry the full line.)

How much money does the average part-time consultant make, based on the amount of time and effort spent on the company's behalf? It's not easy to quantify. While the number of hours spent preparing for and presenting at events might be few, the job also involves making telephone calls and sending invitations and thank-you notes, in addition to bookkeeping, order management and fielding requests for small orders.

"Those are much harder to cost out," says Bundeep Rau, chairman of the marketing department at George Washington University's business school. "The average person doesn't make huge sums."

In fact, the average gross income for a person in a so-called multilevel-marketing venture is less than $100 a month, according to Paul and Sarah Edwards, authors of 10 books on running a business.

Then there's the problem of running out of people to buy the products once friends and friends of friends have been tapped out. "Every one of those [companies'] markets has a saturation point," says Barbara Bird, a professor of management at American University in Washington. "Those things make money for the early people who aggressively seek out subordinate sales agents," but "if there are enough people out there selling the product, I imagine it becomes difficult to be a direct salesperson."

Making money by pressuring friends and relatives is "one of the nasty little realities" of the direct-sales business, says Edwards. To make real money, he said, "you have to market" the product -- which takes time and energy. And marketing isn't what most women have in mind when they decide to get into the home-party selling business. They figure they can get by selling to friends, co-workers and other acquaintances.

It's easy to see how the list of potential customers could grow as friends and acquaintances lean on their friends and acquaintances to buy the products and hold their own parties. But it's not easy to gauge the earnings potential of a company's compensation plan, as different levels of consultants earn different percentages based on different types of sales. "They can be very intricate," says Edwards. "You almost need to be an economist and a lawyer to understand these plans."

"By the time you add up your expenses -- stamps, copying, paper, travel, gas, etc., etc., etc. -- the profit is gone," says one former Creative Memories consultant, who gave up after three years of failing to make money. "The real way to make big bucks was to sign up new consultants under you," said the consultant, who didn't want her name used. "Because I just depended on my product sales for money, I didn't make a profit."

Creative Memories spokeswoman Susan Iida-Pederson said the majority of the company's 45,000 U.S. and Canadian sales "consultants" are stay-at-home mothers. "Many of them have second jobs," she said. Many don't realize that their selling gigs are real jobs, requiring a contract that obligates them to host a certain number of shows or, in some cases, buy some of the products to keep as inventory.

That was the "biggest profit-eating monster," according to the ex-Creative Memories consultant. "By contract, I was required to make a minimum purchase of $300 in commissionable inventory per quarter," she said. "That doesn't sound like a lot, but if you are having a really slow quarter and have only sold $200 -- which is about $50 in profit -- and you have to turn around and order $300 in new products that you don't really need at the time, it gets to be quite frustrating."

"I also felt that I was putting in a lot of time and effort on the phone and preparing for workshops, doing mailings, attending meetings and then the customers were not showing up for workshops," she says. "Their interest and excitement for their projects would diminish. I have a family to take care of and didn't find the work I was doing paying off."

Even hosting a party can be costly. While the hostess can get cheap or even free merchandise as a reward for her effort, she has to buy refreshments and party supplies. The Pampered Chef asks hostesses to pick up the tab for the demonstration dishes prepared by the consultant.

Yet the companies themselves are doing very well. Sales for the Pampered Chef were about $600 million last year, the company says. That's up from $418 million in 1997 and $324 million in 1996. The company, like most of the other home-selling firms, is privately held and doesn't release income figures.

The "independent consultant" arrangement benefits the companies in several ways, making it profitable even as individual consultants exhaust their networks of friends and relatives. "The overhead is extremely low," said Bird. "They don't have to pay people to manage." They also avoid the "slotting fees" stores charge for displaying products, said Edwards. "The cost of entry into the national marketplace is much lower," he said.

Most consultants don't last very long in the business, but the arrangement does work for some. It has to work for others, who are trying to supplement a single income and stay out of debt. In a survey of consultants this year, 57 percent said they planned to continue selling, said the Direct Selling Association's Robinson.

Eleni Scheidt of Potomac, Md., who works as a "kitchen consultant" for Pampered Chef, figures she makes $50 an hour at her job, working as many -- or as few -- hours as she wants. As a former executive in the corporate sales and marketing world, she is better prepared than most to tease some money out of the process.

She says she doesn't pressure people at her parties to buy anything or to hold their own parties. "I'm of the belief that adults can say no," she says. But what about friends, who happen to be adults?

"I always feel like I have to buy something when I go to these parties," says Cortez.

That, for the direct home folks, is the beauty of it. On the surface of the arrangement, it's about adults making adult decisions. Underneath it is about guilt and bonding -- a pair of emotions that mothers know best.

Nora Macaluso is a freelance writer living in Silver Spring, Maryland. She is a former Bloomberg News reporter.