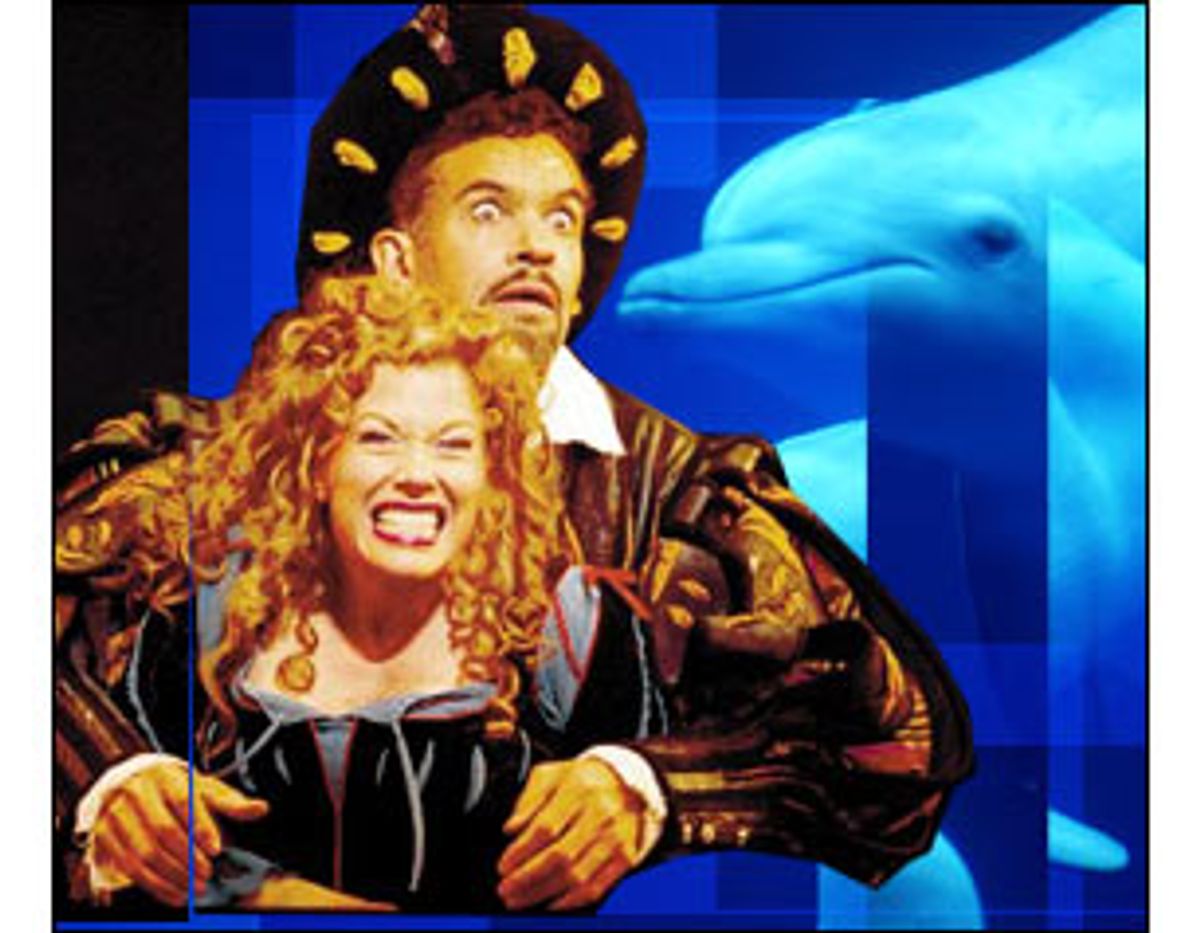 A friend's parents are wealthy country-club types from the East who wear boating outfits no matter where they are, and actually talk with that di-viiine East Coast lockjaw. "Wunder-baaaaaar, wunder-baaaar!" they sang for us one night in a Zinfandel reverie, when we were all having one of those mildly tense parental dinners. They had just seen "Kiss Me, Kate" and were pinching themselves because they thought it was so great they could barely stand it. They sure don't make theater like that anymore! Yes-siree, Bob.

(I am entranced by this couple because of a story about them their daughter told me. Last year at their annual Thanksgiving fete -- when they all dress up in vintage Pilgrim outfits for dinner -- an elderly aunt in full Pilgrim regalia started inexplicably and without warning vomiting green stuff onto her plate. Everyone kept on talking calmly and handed napkins over without looking, pretending nothing was happening. "Are you OK, Ninnie?" asked the hostess politely, putting another bite of roast into her mouth. This is the behavior of true wealth. Old money. If somebody vomited on my dinner table I'd probably flip the whole thing over from excitement, peasant that I am.)

In any case, we took their advice and went and saw "Kiss Me, Kate" at the Martin Beck Theatre in Manhattan.

The production is a perfect example of the golden age of theater -- when it was squeaky and clean and somehow magical in a non-high-art kind of way; a sociological piece of gilded yesterday. The thing your grandparents would have thought was a killer piece of new, razzle-dazzle entertainment. All the now-exhausted dramatic rules were new back then; the boy-meets-loses-gets-girl-back thing, the predictable dramatic twists, etc. You can't, after all, find much to say that is negative about Cole Porter. No matter how jaded thou art, you can't see "Kiss Me, Kate" and not sing "Brush Up Your Shakespeare" around the house for days afterwards. Old King Cole knows the abuses of the humankind and wrote about them as cleverly as anybody ever has.

However, as much as I loathe the uptightness of p.c. ultra-feminism, I have to say that the rampant sexism inherent in "Kate" and other dumb entertainments of the time (e.g. worthless, prehistoric Julia Roberts prototype girlie movies like "Adam's Rib") reminds me of watching a film in which the protagonists are wealthy plantation owners in the Deep South before the Civil War and all the black servants cringe vapidly and say "Lawdy lawdy, yes massuh" and tap dance in the stable and eat watermelon. It makes one cringe, no matter how cute and/or historically innocent the overall production.

The two main females in "Kate" are Bianca, the slut, the little blond piece of ass who can barely speak her own native language, and who sings gleefully about whoring herself for expensive clothes -- "If [my passage, and by extension, my prostitution on] the Gable boat means a sable coat, anchors away!" -- and Lilli, the powerful-bitch movie star protagonist, the "Kate," who as a sophisticated woman has to endure countless indignities in the name of love at the hands of her egotistical, pussy-hound ex-husband, then comes crawling back at the end pledging on her knees to be his spaniel. There was a small concession in this production to making this gesture less nauseating when Lilli/Kate winks at Bianca the whore as if to say, "Watch me make this bastard eat this line of simpering wifey bullshit and I'll weasel my way back into marriage, ha ha ha," and it all basically stinks.

The thing that I object to most in this production is the fact that all of the deliciously naughty Cole Porter double entendres are ham-fistedly reduced to single entendres. "Where is the life that late I led? Where is it now?" sings Freddy, the newly married stud character, referring to the excitement of his randy bachelor days. He gazes down at his crotch and shrugs. "Totally dead."

The whole production is lousy with dick double-takes and dry humping, which is all fine in and of itself, but removes all of the amusing upper-crustish style of Porter's artfully concealed smut. I suppose the producers thought that if they didn't over-indicate the naughtier meanings, nobody in the super-refined and innocent New York theater audience could possibly arrive at the lewder suggestions themselves.

"If she says your behavior is heinous, kick her right in the Coreolainus," sing the gangsters in "Brush Up Your Shakespeare." That's not too vague, right? "When your baby is pleading for pleasure, let her sample you measure for measure," croons the gangster, mime-jacking-off his giant schlong. Honestly, did we need that, people?

"Kate" also has a lot of ha-cha-cha "high-energy" dance numbers. These unfortunately feature weirdly uncharismatic performers, and result in a whirling gravitational vortex of non-excitement. It's really awful when everyone onstage is dancing as fast as they can, and spasmodically clapping their hands and acting as if they were involved in an inspired, full-gospel, skirt-hoisting kind of rave-up, yet the number still fails to get off the ground. The more energy the performers unsuccessfully try to create onstage, the more oxygen gets sucked out of your brain.

For all of its highbrow, top-shelf entertainment, there is a vast aesthetic age gap. The blue-haired rich oldsters and their grandchildren were the people who really got their money's worth out of "Kate." I was mildly amused, mostly by the lyrics. My date was stone-bored halfway through.

It made me try to figure out what I really consider to be great entertainment, and where I could find it. I realized that I thought the best part of "Kate" was when the fabulous set-pieces derailed and didn't go away; the "star's dressing room" set didn't pull back into the darkness, and Padua suddenly tumbled from the proscenium and crashed down on top of the dressing room and the landscape didn't unroll all the way, and the singers were supposed to be doing some kind of bucolic Maypole dance amid flourishing trees and there was nothing behind them but a dark box and some confused chubby guys with headsets on.

A stage manager in a horrible Bill Cosby sweater came onstage, stopped the show and apologized, citing technical failures, and promised to have us "back in Italy shortly." The lights came up, the curtain came down. Mid-show! The audience was astonished. A full-scale Broadway major-league fuckup! My, my!

I was struck by a quote in a recent interview in the Onion with rock poster-artist Frank Kozik. He was discussing some paintings of his that he refuses to exhibit in the United States: "There's stuff I do for other places I absolutely won't allow to be disseminated in the U.S. because nobody here would really understand," Kozik said. "I do a lot of sort of high-end stuff in Japan with this group of people who own lifestyle kinds of businesses ... a lot of the older cats were beatnik types in the '50s and '60s."

"There's no ageism over there," he continued, "so I work with a circle of people in Japan where they're all super cool, but they're from 17 to 65 in age and they all work together as a big organic family. It's a very cool scene over there, very intellectual. It's also extremely fucking anti-everything. So, for example, we do super-fancy designer stuff where you take Klan imagery and twist it toward making fun of Japs. Like, I did a whole series of ultra-fascist Nazi stuff, but it's all because they like to look at it and it's not really Nazi stuff. It's kitsch, almost. Does that make sense? You take this bizarre power imagery and turn it on its head. It's a really complicated process for an American to understand, so I don't let that shit out over here, because people would flip out."

Kozik's remarks in the Onion made me want to swim to Japan, made me feel like there was a ray of hope somewhere, an irreverent planet within the all-too-reverent one. I was exposed to something like that here in New York recently, but generally these klatches of ultra-cool bizarro stuff are remote and hard to find.

Richard Metzger recently had an event at New York's Hammerstein Ballroom called "Disinfo.con," a sort of paranoid, black-clad and tragically hip conference featuring speakers from the intellectual weirdo elite and various conspiracy theorists. Basing his idea on the 1979 Nova Convention in honor of William S. Burroughs, Metzger expressed a desire that the event be "one part rave, one part performance, one part mind-fuck."

Of all the speakers, I was most impressed with Adam Parfrey, publisher of Feral House books and author of "Apocalypse Culture (Vols. I and II)." Parfrey proved, to me at least, that the most interesting stuff in the world, entertainment-wise, is manifestations of bizarre, isolated belief systems and/or other wild anthropological mutations. The ways people flip out.

During Parfrey's brief time onstage, the audience was shown slides of art from the "Nubian Hebrews," a sect that utilizes images of Jesus and the Holy Mother looking like Lionel Richie and Toni Braxton. This segued into a discussion about the multimillion-dollar breeding of a pure red heifer by a Texas oilman for reasons of promoting Armageddon, and talk of a group of people who want to try to clone Jesus out of DNA from his foreskin, which they say is in the possession of a group of cloners from the Bay Area at this very moment.

My personal favorite topic of Parfrey's was the tale of Brice Taylor, a woman who claims that Bob Hope and Henry Kissinger forced her to be their sex slave through Satanic mind control. Taylor also claims that she was forced to be the romantic female lead in a "dolphin porn" movie shot by Sylvester Stallone, who also tried to force her to have sex with a sea turtle. The turtle, claims Taylor, was "too nice" to have sex with her. She writes that she was eventually saved by Jesus. Needless to say, I found Parfrey's collection of whacked-out human oddity souvenirs totally interesting and entertaining.