Hidden identities, an aborted marriage and a hooker without a heart of gold inhabit Soren Kragh-Jacobsen's droll "Mifune." 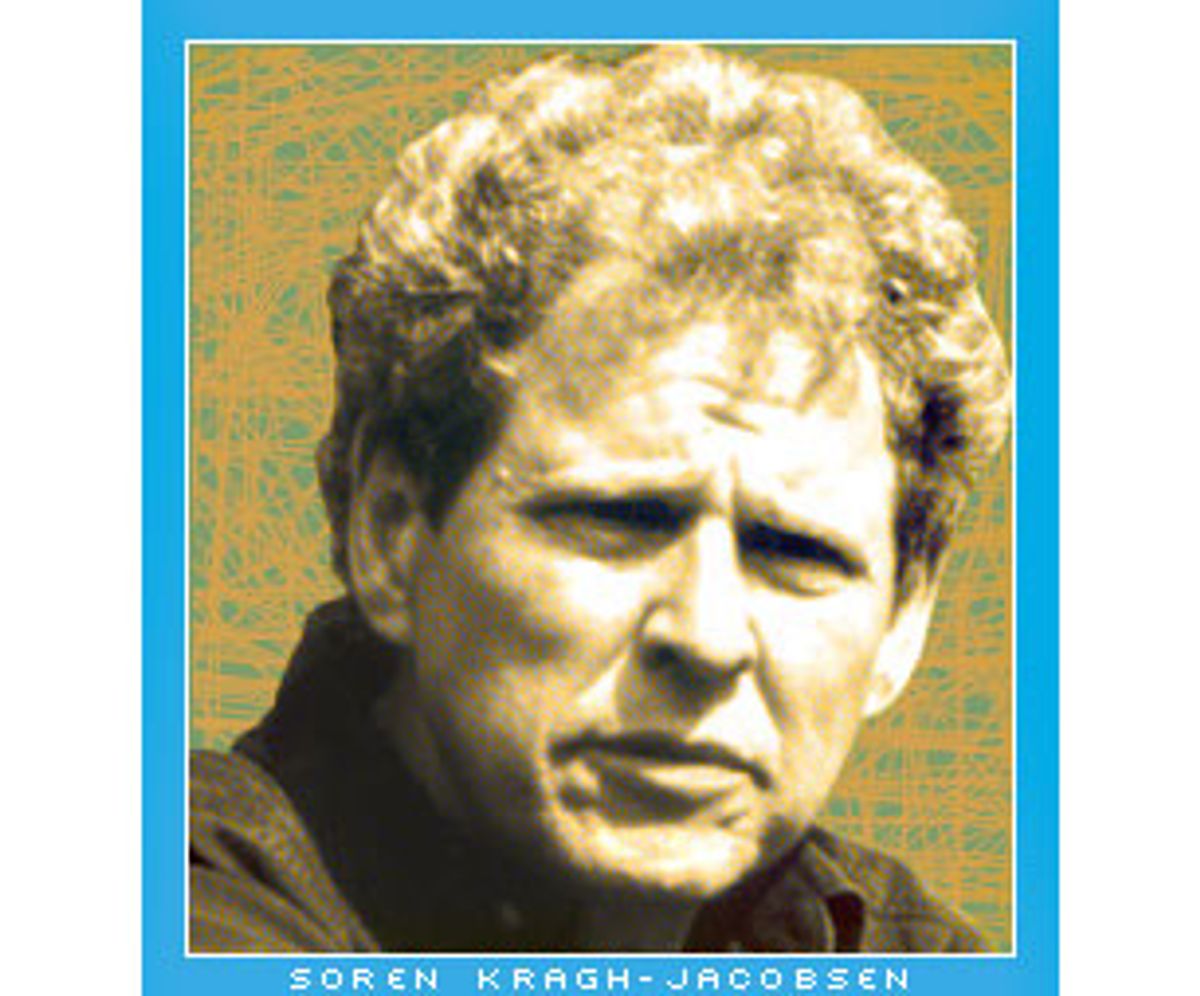 "Sometimes I wish my name was -- Rock Hunter!" says Soren Kragh-Jacobsen, the Danish writer-director of a droll, beguiling romance called "Mifune." (He speaks, and jokes, in fluent English.)

It's fitting that his first remark during our interview in San Francisco should be a quip about identity. The hero of his film, the amazing Kresten (Anders W. Berthelsen), is a Copenhagen businessman who skyrockets to the top -- and to the altar with the boss's daughter -- partly by lying about his past. Kresten tells his new family that he has no family. But on the morning after his wedding, he learns that his very real father has just died. He leaves his luxury honeymoon suite for a dilapidated farm on Denmark's southernmost island, Lolland.

The movie's combination of high-stakes wedlock and covert tawdriness couldn't be more timely. Kresten wants to be a millionaire and marry a multimillionairess. When he practices martial-arts moves on a hotel rooftop, he comes off as one more would-be warrior tycoon.

But in remote Lolland, as he arranges for his dad's funeral and for the care of his mentally impaired elder brother, Rud (Jesper Asholt), what's left of his former family life transforms him. The title of the movie is a reference to Japanese film star Toshiro Mifune, from "The Seven Samurai" -- he is Rud's favorite actor. Kresten finds true love -- and his true self -- after he hires a housekeeper named Liva (Iben Hjejle) to look after Rud. But first come brutal complications involving Liva's preppie rebel brother and her hidden past as a call girl.

In its own unassuming yet cheeky way, this film outlines the emptiness of upward mobility in an age of unapologetic capitalism. It earned a Silver Bear (second prize) at last year's Berlin Film Festival. But Kragh-Jacobsen says that he didn't make this film (in Danish, with English subtitles) with an eye toward the global marketplace. "Mifune" is the third production of the Dogma Collective, aka Dogma '95 -- a group of filmmakers who aim to rattle the bourgeois complacency of the Danish film world and refute the pyrotechnics of world cinema. Like "Breaking the Waves" auteur Lars Von Trier (who made the Dogma film "The Idiots") and Thomas Vinterberg (who made the Dogma film "The Celebration"), the director took "The Vow of Chastity" for "Mifune." He swore to shoot only on location, use a handheld camera and record all sound and music at the same time as the images. The 10 rules that make up the Vow can be found at www.dogme95.dk. They're meant to focus each director on contemporary subjects without "superficial" action or artistic self-indulgence.

Kragh-Jacobsen admits that the Vow of Chastity was designed to churn up attention. "In a small country, you have to invent something just to stay on the map. And if you want to keep a local audience -- if you want make them get out of the house, leave the chair and the TV, hire a babysitter, pay $10 and take a taxi -- you need to shake them up a bit, surprise them." But Dogma's dictates also came as a relief. On Kragh-Jacobsen's last picture, a fable of childhood in the Holocaust called "The Island on Bird Street" (1996), he held to a stately style and jousted with producers about "fitting it out to suit the audience" with romantic music. He wanted to regain the spontaneity he had when he started out in the '70s and, with "Mifune," make a film with "no producer interference, no script doctors, no test audiences."

Although Lars Von Trier and Thomas Vinterberg are Dogma's founders, Kragh-Jacobsen is its elder statesman. He remembers teaching a film class 15 years ago and seeing Von Trier in the room "with his back to me, listening to a yellow Walkman." Ten years go, he sat on a film school committee that admitted Thomas at age 19. Kragh-Jacobsen is friendly with both of them: He admires their chutzpah and their filmmaking. "Lars is sarcastic, funny and a wonderful person -- an extremely good filmmaker, whether you like his films or not. He's certainly fantastic in the way he promotes film, and in his experiments, in the way he thinks.

"And Thomas inspired me with 'The Celebration' [the international art-house hit that Time Out aptly described as Buquel meets 'Fanny and Alexander']. He's 30 years old and has all this anger. He made a wonderful movie about disconnecting a family. I'm 22 years older, and I'm a true believer in family. I've had the same wife for many years and have two grown-up kids, including one who's been in the U.S. for four months. But I believe in different constellations of family. I have lots of friends who live with kids from a first marriage, and then have one together, or have their own mother living with them, or have grandchildren living together with their own youngest children. I love these kinds of families; that's why, in 'Mifune,' I found it extremely funny to make a family out of these odd couples."

The optimistic, sure-footed "Mifune" will delight Americans who expect Dogma '95 to deliver Danish fear and loathing in a hyperactive fashion. Kragh-Jacobsen's camera follows the characters through grubby interiors and gorgeous landscapes with the casual intimacy of a next-door neighbor. "I wanted to show the different colors of Dogma," he says. "I wanted to show that it's a set of rules, not a style."

Kresten was the first character to seize his imagination. "I know several guys like him from the bureaus I work with when I do commercials," he said. "I like guys like Kresten; they're so restless. They're just out there thinking 'me me me me me.'" Kragh-Jacobsen mentioned that his career-minded father-in-law lost track of a beloved friend and compared that to the human failings of his contemporaries; he decided, "This was a good thing to catch up with -- a guy who thinks so much about himself and says whatever suits him to [benefit his] career. Then suddenly he is one day hooked on this big lie: He admits he has to clean up, go back to where he came from, and stay."

The director wanted his tale of redemption to be a love story. What helped him flesh it out was "finding actors when I had just five lines, so I could write the rest of it to some faces." Anders W. Berthelsen, who plays Kresten, was a popular TV star. Jesper Asholt, who gives Rud hilarious and poignant hand movements that never quite articulate his thoughts, had appeared in student films. And Kragh-Jacobsen had seen the emotionally pristine actress Iben Hjejle both on stage and in a small Danish movie. He thought she had star quality -- "she's not just beautiful and sexy, she has many layers." (She costars with John Cusack in Stephen Frears' forthcoming film of Nick Hornby's novel "High Fidelity.")

To throw Kresten's corruption into stark relief, Kragh-Jacobsen portrayed his brother as a developmentally damaged grown-up. "I've always been fascinated by the 'adult child,'" he said. "I have a home in the countryside, where there is a home for people like that 10 kilometers away. They're always standing there, waving. I decided to visit them, and it was funny to be there. There's something unspoiled and still very innocent about them. I decided I would like to portray a person like that someday. It's not a new story, but Jesper and I worked hard at it. Both of us went to some of these homes. And we spent two days with 420 retarded people gathered for a sports weekend.

"One thing we talked a lot about was getting rid of Jesper's intelligence. Very often he came out and I said, 'You are too bright in your eyes'; he had a mantra he was working with. And it took him 15 minutes. [After production was finished] I had a very blurred shot and at the end I brought Jesper back to help me pick it up. He couldn't climb back into Rud. He had the same costume and the same hair, but after two hours I had to say it's not him. That's how much Jesper had been into it."

As for Iben's call girl, Liva, "I can put my hand on my heart and say, I wanted to find something else for Iben to do. There's no doubt that I made a portrait of every man's dream of a whore. But I don't regret that -- I think that's nice! I thought that if I succeeded with the love story, I could convince the audience that she contained many other things besides being a whore. If you see her as a tender woman I have reached my goal. I wanted a character with a secret. And there were no other secrets I could find -- I didn't want her to be running from a husband who was abusing her, or anything like that. So I decided she should be an escort girl, a call girl. I researched, though not as much as I wanted to, because my wife didn't think it was such a good idea. I talked to several of them, and found that they actually became like a family to each other, because they have this job that they can't tell anybody about. They have their problems. They share good and bad things, and I was attracted to that."

The most daring scene occurs when Liva, wanting to punish her manipulative brother and the callous Kresten, briefly drifts back to prostitution. "She's saying, 'I'm a whore, and I'll show them.' That caused the only discussion I had repeatedly with my producer, who is a woman. She said that I would never get the audience's sympathy back for her. And I said I will, because the movie is about forgiveness, and because Kresten is as wrong as Liva is. He's been cheating and lying about everything and she has this mitier as a call girl: Why shouldn't she use it? I'm very attracted to these not-very-clean people. Why shouldn't they have a life in movies?

"I wanted to deal with liars -- being a liar is part of being a movie writer-director; you're doing that all the time. Especially in the world of commercials, sometimes to get rid of problems you say things that aren't true. But a lie like Kresten's, that's where you really can get caught, get hooked. 'No I don't have a family': And you have a family! This guy is into money; and a call girl, she makes a lot of money, too. Now, in the movie, they are both getting into a simpler life and finding love. And that's what we're doing with the Dogma films. I thought of that a lot!"

Since it was a Dogma film, finding the right location was critical. Lolland proved to be ideal visually and dramatically. "It's flat in a beautiful way. The look it had -- two-thirds sky and one-third country -- was right for this story. There aren't many people, and I thought it would be fun to be living out in Lolland in camping-wagons with these guys. There was a depression 10 or 15 years ago; farmers could no longer make a living on 10 to 20 acres, so one farmer would buy five other farms. I looked at 21 empty houses." On the day Kragh-Jacobsen chose the one he used in the film, he heard the news that Mifune had died. Mifune in "The Seven Samurai" is as big a liar as Kresten -- he's a peasant masquerading as a samurai. "I decided to give him a last tribute," the director says. "That's why in Danish the film is called 'Mifune's Last Song.'"