My brother is under the spell of a company that promotes the frat-boy free-for-all. 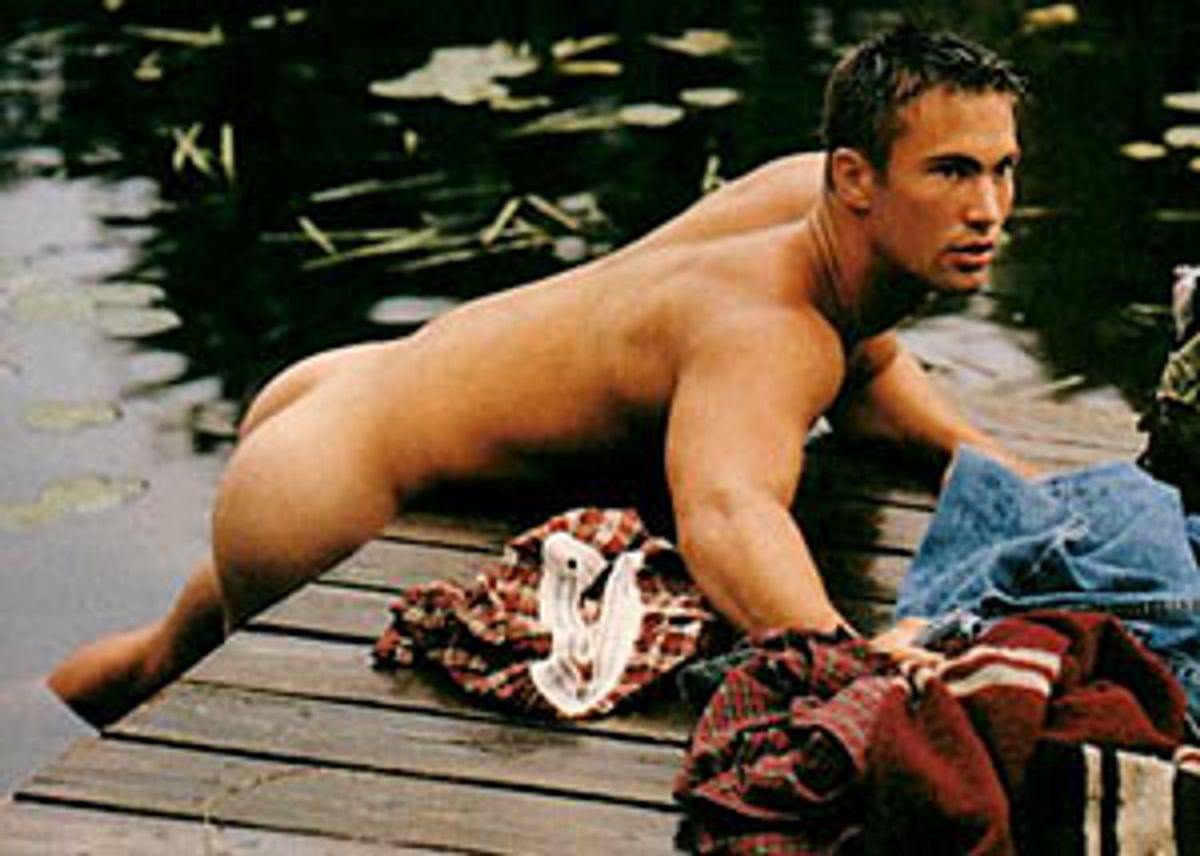 "Abercrappie" is what my youngest
brother called Abercrombie & Fitch after
Ryan, our 15-year-old sibling, begged
for the worn-looking, overpriced
clothes du jour.

Shirts, pants, sweaters, socks -- Ryan
wanted Abercrombie everything and he
stumped for the stuff like a wide-eyed
activist. In the kitchen, tossing
punches at Josh and me, he used the word
"quality." When I walked away, he
chased me with a speech about owning
"just a few things that you love to
wear." He even suggested that I
pick up some Abercrombie -- "It
might help you get a girlfriend," he
offered with very little tact.

Christmas was only a few days away and
the smart-alecky banter -- "I want
X" vs. "So what, you can't have it" --
rang typical, as much a part of
our family's holiday tradition as egg
nog. But a specific brand request:
That was new.

I remembered longing for Air Jordans,
Champion sweatshirts, even Ralph
Lauren Polo shirts. But my parents
shamed me into either buying them
myself or squeezing them out of
relatives. On occasion, Mom or Dad gave
in, but they always had a choice. Never,
strong as my longing was, had one
designer inspired the single-branded
passion I heard in Ryan's voice.
Somehow, Abercrombie was different: more
manipulative and more coveted
than both its past and present rivals.

That drug-like draw angered me. After
watching packs of pimply teenage
boys in Massachusetts malls ogle the
boobs and brands of the opposite
sex, I couldn't help but want Ryan to
swim against the current in this sea
of conformity.

I swore I would never buy him the
Abercrombie clothing I saw his peers
wearing like a uniform. In fact, I
decided I would play with his repulsive
desire by putting a "Just kidding!" note
inside an Abercrombie gift-certificate
envelope.

First, though, I tried to fight back
with words.

"Why would you want to be a billboard?"
I asked. "They're not paying you
to advertise their name."

Ryan went for finely tuned sarcasm. "But
it's just so cool," he
said, trying to irk me in the short term
while offering the kind of
self-deprecation that just might
convince me to give him what he wanted
later on.

By that time, my question was largely
rhetorical. I already knew the real
reason he was lusting after these
clothes. Only two months earlier, Ryan
had begun fusing himself to Nicole, a
blond A student who won our family's
favor by staunching Ryan's class-clown
tendencies.

But while she kept his bragging to a
minimum, Nicole also amplified Ryan's
navel-, chest- and shoulder-gazing. When
I picked her up on Christmas night,
she wore a yellow Abercrombie T-shirt,
and as I drove the magnetic couple
back to our family's house, A&F earned
at least as much air time as the
latest gossip about teachers and other
high school trysts. Nicole, like
many women present and past, had become
the arbiter of her man's taste.
And in her court, Abercrombie was king.

"I think it's all she wears," said my
mother that same afternoon,
chuckling. She had already decided that
Nicole passed muster, so her
criticism remained light. Still, as a
frugal New Hampshire native who
stocks her shelves with generic foods
and her closets with closeouts, my
mom became easily incensed when
discussing Abercrombie's prices.

"Seventy dollars for pants! It's
outrageous."

What's more, as a mother who objects to
premarital sex with a puritanical
fervor, she also objected to the
company's marketing campaign.
Essentially, it sexualizes America's
love of the aristocratic golden boy
and girl -- the blond, WASPish, Ivy
League party animals most recently
represented by Jude Law and Gwyneth
Paltrow in "The Talented Mr. Ripley."

Indeed, women appear in the ads as well, but the
boys rule. When they're
not baring their asses to clamber naked
aboard a dock or laying prostrate
in the grass, the models huddle, flex
and pose in store foregrounds like
10-foot trophies, a fact that most teens
couldn't help but notice and want
to copy in their own lives.

My mother didn't much care about whether the bare butts were male or
female. She objected to what she perceived as the encouragement of sex. In
so doing, she was in cahoots with Illinois Lt. Gov. Corinne Wood, who
called for a consumer boycott of Abercrombie because of the sexually
explicit nature of its holiday "Naughty or Nice" catalog.

But as I tried to decide what to buy Ryan and my two other adolescent
siblings for Christmas, the sex didn't bother me. The brand's dominance
did. That dominance, in my opinion, has less to do with skin than with the
company's fusion of two settings: the city of hip-hop lore, and the college
of the frat-inspired free-for-all. The former can be seen in the company's
baggy, urban-inspired designs; clean-cut models on grassy fields embody the
latter.

Sex is a mythical part of these settings, but parents often fail to realize
that these places -- and thus Abercrombie -- symbolize more than the
longing to get naked. Ultimately, they represent freedom, excitement -- a
wide array of adventures that remain off-limits to the teenage children
of today's SUV-driving parents.

The Reynoldsburg, Ohio, company has posted 29 consecutive quarters of record
sales and earnings, making it one of the world's best-performing retail
brands. Surveyed teenagers repeatedly rank it near the top in terms of
"coolness." To see that success only in terms of sex implies that teenagers
are nothing more than their hormones, and that they are the company's only
customers.

Neither implication is correct. I know adults who wear Abercrombie
clothing, if only the shirts that carry the company name on the inside
label. And as for sex: Yes, many teenagers' bodies insist that the subject
come up, and often. But hormones affect more than sexual desire. As adults,
in our own lives, we know this. But when we eye our sons and brothers,
amnesia strikes.

Somehow we have forgotten -- probably because of our fears -- that the
hormone-inspired energy of youth leads most often to neither sex nor
violence. The brandishing of bare chests by teenage boys and their
incessant raunchy chatter represent a healthy desire to learn, to push
against adult boundaries, to discover the art of living. It's the same
force that can be heard on the first Beck album, completed before he was
old enough to vote.

Even though Abercrombie taps into this pent-up energy with controversial
content, the images don't matter. The company is "cool" not because of the
sex or the beer, but because these subjects signify a much wider idea,
namely the freedom to live as the kid -- not the parent -- sees fit.

Opining on Abercrombie's appeal, however, didn't much change my decision to
boycott the store. I still wanted Ryan to be above it all. But after
putting my note in the gift certificate envelope, my smugness stung me. I
already had bought books and movie passes. I feared the trick certificate
placed me at risk of becoming the pedantic big brother.

So I gave in. On Christmas eve, I bought Ryan a fleece jacket, marked down
from $49.99 to $29.99. I justified it by remarking that the name
"Abercrombie" only appeared on the inside tag and on the zipper. Ryan had
been getting good grades, so I figured he deserved it. I figured my love
should trump my politics. I figured his tastes mattered more than mine.

Much to my surprise, my parents did the same thing. On Christmas morning,
Ryan opened not just my Abercrombie box, but several others. We had
resisted the call of the $70 pants, but ultimately we had given in. We had
conformed, accepting Ryan's argument for "quality" and "clothes worth
loving." And we all knew it. Mom, Dad and I glanced at Ryan as he stripped
to try on each jersey, then stared guiltily back at each other.

"The little twit got what he wanted," I added. "And Abercrappie won. They
got us."

Then and now, I continue to fight back. I explain to Ryan how he's been
made a pawn, a cookie-cutter version of youth. I'm hoping that he'll learn to
dress and live for himself, not his peers or his girlfriends. I'm hoping
he'll rebel against Abercrombie and his peers.

If and when he does, we'll still have other battles to fight. Joshua, my
13-year-old brother, coiner of the term "Abercrappie," didn't get any of the
company's clothing for Christmas. But when he opened the surf sweatshirt I
got him, his first question was: "Where did you get it?" And as he watched
Ryan open box after box from Abercrombie, Josh's eyes opened wide with
yearning. Later, he dropped hints that maybe Abercrombie wasn't so bad.

Ultimately, I'm not surprised. When Hannibal Lecter asked, "What do we
covet?" he couldn't have been more right in answering, "We covet what we
see."

My only wish is that suburban, teenaged style looked less like a dress
code. I wish Abercrombie had stiffer competition; that kids would demand
more from their merchants. But most of all, I wish Ryan, Nicole and so
many other teenagers would act as smart and savvy as I know they are.

Until then, I'll buy them what they want -- then try and convince them to
hate it.