"What Planet Are You From?"

It's a sad day for cinema when a vibrating penis upstages a perfectly good actress. 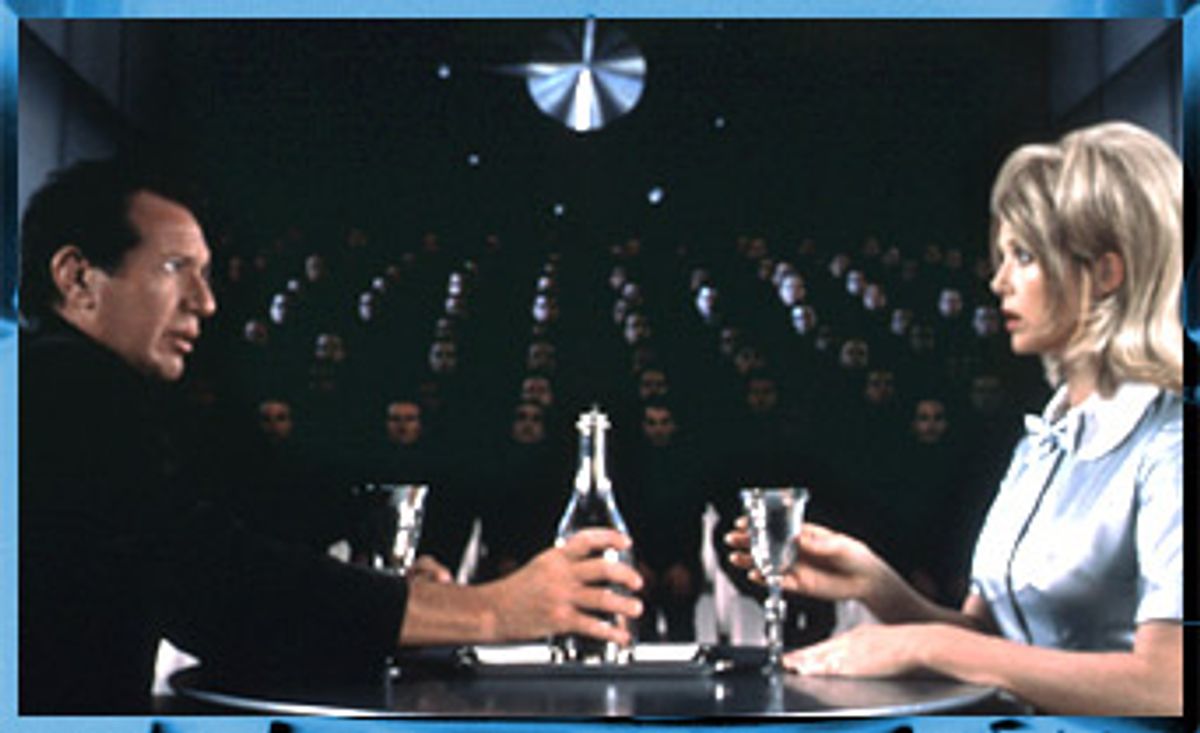 When you're trying to make a funny
movie, it's nice to have a handy gimmick
you can turn to over and over again. In
"What Planet Are You From?" that gimmick
is a penis that's been surgically
grafted onto an alien man (Garry
Shandling) who's been sent to Earth from
his home planet to find and impregnate a
human woman so his race can take over
the universe. This penis makes a
whirring noise -- dadblasted if it
doesn't sound just like a vibrator! --
every time our alien friend gets
excited. And if you don't get the joke
the first time, don't worry, because
it's bound to pop up again.

It's just about the funniest gag in
"What Planet Are You From?" the first
time, at least. Otherwise we're left
mostly with jokes that amble nowhere,
and the task of trying to decipher
Shandling's eternally blank, doughy
expression. The point is, of course,
that there's nothing to decipher:
Shandling is all about deadpan, and it
should work well enough here, since he's
playing an alien with no human emotions.
But he's never particularly likable,
whether he's showing up at an AA meeting
with his new Earth pal (Greg Kinnear)
hoping to pick up girls, or somehow
inducing his infant son to send an arc
of pee straight onto the shirt fronts of
a bunch of alien baddies. The philosophy
here seems to be: When the vibrating
penis grows tired, bring on the
squirting pee.

The story, written by Shandling, who
also co-wrote the screenplay with
Michael Leeson, smells like any number
of sci-fi comedies we've seen before.
Shandling lives on a far-off planet
headed by Ben Kingsley (doing his best
Patrick Stewart), a planet where there's
no breeding (its inhabitants are cloned)
and no one has any emotions. In fact,
each successive generation simply
becomes more aggressive and domineering,
which means it's time to take over the
universe, starting with planet Earth.
After a training session in which the
awkward aliens are shown, via a hologram
cutie, the "access points" to the Earth
woman's womb (they're also advised to
compliment her on her footwear in order
to get her into the sack), Shandling is
chosen to zip down and make the initial
conquest. Posing as a loan officer, he
does his best to assimilate, making the
usual predictably clumsy mistakes, and
ends up meeting the fragile, spacy,
recovering alcoholic Annette Bening,
who's anxious to have a child for her
own reasons. The two marry in a quickie
Vegas ceremony -- there's some stock
silliness in which the fountain outside
their hotel room gushes gloriously as
Shandling's wonder boy vibrates away --
and embark on the grand adventure of
conception.

But "What Planet" does little more than
go for easy laughs, and Nichols'
direction doesn't do much to enhance
them. The picture barely works as a
silly adult sex farce, it isn't nearly
freewheeling and naughty enough, and
it's all too easy to predict at the
beginning that by the end we'll be
handed a nice little lesson about love
and commitment. And though it's no great
sin to have a few plot holes in a
comedy, "What Planet" seems needlessly
sloppy. Shandling travels between his
planet and Earth by transporting
himself, via a big flash of light, onto
a regular commercial airplane, and he
repeatedly meets Kingsley in the
airplane bathroom for emergency
meetings. John Goodman, as an airline
investigator who's examining these weird
air phenomena, finally traces their
occurrence to Shandling by scanning the
passenger list -- although it's anyone's
guess why an alien who can appear and
disappear in a blaze of light would
bother to purchase a ticket.

Bening is the picture's single saving
grace: She never lets her character go
too soft, and the crispness of her line
readings keeps the movie from going
completely slack. When Shandling,
visiting her apartment for the first
time, takes note of the Buddhas and
Ganeshas cluttering her dresser, she
explains that in AA she's supposed to
appeal to a higher power, but she can't
decide on one, "So I'm covering my ass."
Bening's prickliness is pure delight,
but there's only so much she can do.
It's a terrible fate for an actress to
be upstaged by a humming penis.