To hell with European philosophers: The breakthroughs of non-European thinkers are the 1960s' greatest legacy. 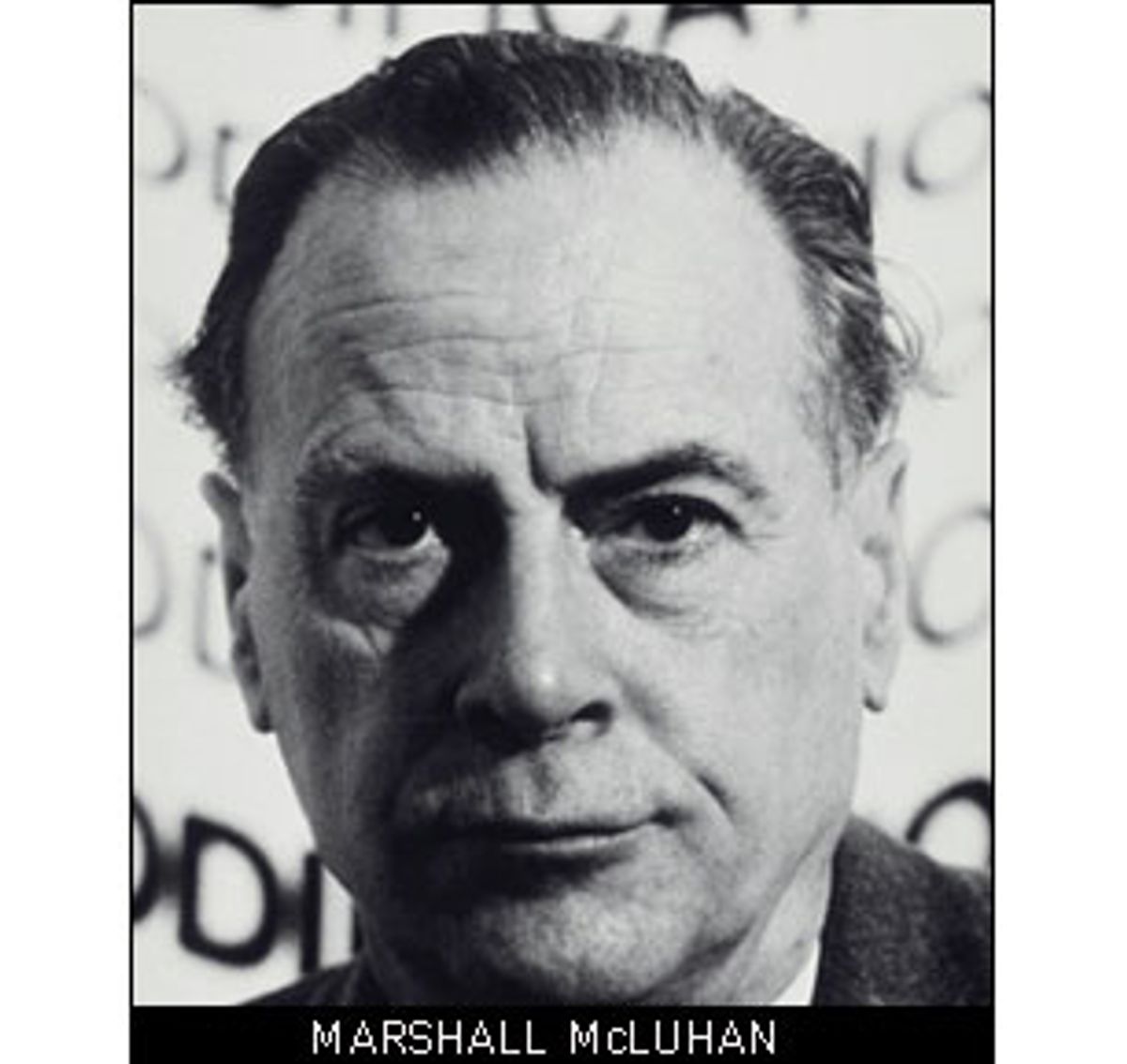 A war still rages over the legacy of the 1960s. For many conservatives that decade spawned the worst aspects of contemporary culture, from sexual promiscuity and epidemic divorce to drug abuse and educational decline.

What has been forgotten is that there were major intellectual breakthroughs in the 1960s, thanks to North American writers of an older generation. There was a rupture in continuity, since most young people influenced by those breakthroughs did not enter the professions. The cultural vacuum would be filled in the 1970s by jargon-ridden French post-structuralism and the Frankfurt School, which dominated literature departments for a quarter century.

It's time for a recovery and reassessment of North American thinkers. Marshall McLuhan, Leslie Fiedler and Norman O. Brown are the linked triad I would substitute for Jacques Lacan, Jacques Derrida and Michel Foucault, whose work belongs to ravaged postwar Europe and whose ideas transfer poorly into the Anglo-American tradition. McLuhan, Fiedler and Brown were steeped in literature, classical to modern. They understood the creative imagination, and they extended their insights into speculation about history and society. Their influence was positive and fruitful: They did not impose their system on acolytes but liberated a whole generation of students to think freely and to discover their own voices.

I feel fortunate indeed that McLuhan published his central work, "Understanding Media," in the very year -- 1964 -- that I entered college. Fiedler's "Love and Death in the American Novel" and Brown's "Life Against Death" had appeared just five years before.

McLuhan's pioneering examination of the revolution wrought by electronic media in Gutenberg's print culture demonstrated how history could be reinterpreted with terms bridging high and popular culture. He had a breathtaking sweep of vision and a charming aptitude for the startling example. McLuhan's irreverent, aphoristic wit was perfectly attuned to the brash spirit of my generation, with its absurdist "happenings" and its taste for zinging one-liners -- in the satiric style of Lenny Bruce or the gnomic manner of Zen sages and Hindu gurus.

"Understanding Media," which had a tremendous impact on me at a pivotal moment in my development, is a landmark of cultural analysis. It contains an epic panorama of Western culture: Greek myth, Shakespeare, William Blake, James Joyce, Pablo Picasso and Margaret Mead mingle with the Marx Brothers amid an "Alice in Wonderland" swirl of clocks, comic books, alphabets, telephones and typewriters. In its picaresque form and carnivalesque tone, "Understanding Media" resembles Petronius Arbiter's "Satyricon," with its vivid picture of Nero's Rome. McLuhan finds the key to our overloaded cultural environment, and his swift rhythms, playful tone and deft touch make academic semiotics look ponderous, pretentious and pointlessly abstract.

My argument is that the North American intellectuals, typified by McLuhan, Fiedler and Brown, achieved a new fusion of ideas -- a sensory pragmatism or engagement with concrete experience, rooted in the body, and at the same time a visionary celebration of artistic metaspace -- that is, the fictive realm of art, fantasy and belief projected by great poetry and prefiguring our own cyberspace.

North American philosophers from the late 19th century on turned away from the metaphysical preoccupations and dour worldview of European thinkers. The pragmatism of William James was based on his early study of anatomy and physiology. James' portrait of consciousness as an active agent anticipated McLuhan's identification of modern media as "extensions" of the senses. John Dewey's theories were also grounded in the senses, and his focus on educational reform prefigured McLuhan's attentiveness to how the young process information in our media-saturated age. Dewey's faith in democracy paralleled McLuhan's opposition to Marxism, flowing from his recognition of how capitalism, in creating mass media, enhanced individualism and promoted social mobility.

The primacy of the body in the North American intellectual tradition is one of our great distinctions. McLuhan's classification of different eras as "acoustic" or "visual" and his emphasis on the "haptic," the sense of touch, meshes beautifully with the American arts. Exploration of the body inspired the revolutionary choreography of Isadora Duncan and Martha Graham; the Stanislavskian "Method" of Lee Strasberg's Actors Studio; the organic pulses and respirations of the Black Mountain school of poetry; and the percussive rhythms of our glorious popular music from ragtime to rock 'n' roll.

European philosophy collapsed after Kierkegaard and Nietzsche. The post-structuralists, following the nihilist Husserl and Heidegger, were narrowly French thinkers who were struggling with the rationalism of French discourse. But North Americans who had absorbed McLuhan, Fiedler and Brown had no need for post-structuralism, with its Saussurean view of reality "mediated" through language. English speakers possess their own critique of language, contained in English literature itself from Chaucer's Middle English and Shakespeare's protean early modern English to the avant-garde experiments of Joyce, whom McLuhan, a lover of etymology, closely studied.

The North American intellectual tradition began, I maintain, in the encounter of British Romanticism with assertive, pragmatic North American English -- the Protestant plain style in both the U.S. and Canada, with its no-nonsense Scottish immigrants. The crucial transitional writer was Ralph Waldo Emerson, the aphoristic poet and lecturer to whom I trace McLuhan's intellectual lineage. McLuhan's daring aphorisms, or as we now say "sound bites," were his public signature.

It is the Romantic respect for nature that I define as a primary characteristic of the North American intellectual tradition. The claustrophobic world of post-structuralism sees nothing but oppressive society operating on passive, helpless mankind. Nature at its wildest and most sublime rarely impinges on Paris. We in North America, however, with its powerful, ever-changing weather systems, its vast geography and monumental landmarks like Niagara Falls and the Grand Canyon, know that nature is the ever-present ground of all human thought and action.

McLuhan's vastness of perception partly came, as biographer Philip Marchand notes, from his prairie origins in Alberta -- exactly the kind of landscape, in fact, that inspired the hugely influential "prairie style" of an American genius, architect Frank Lloyd Wright. Fiedler taught for 23 years in big-sky Montana and for over 30 years in snowy Buffalo. He and Brown attended graduate school in the north country of Wisconsin, where McLuhan began his teaching career. As a native of the snow belt of upstate New York, I too claim the feisty independence of the Northerner. I was raised, I like to say, breathing cold, clear Canadian air.

The North American synthesis of the pragmatic and the visionary in McLuhan, Fiedler and Brown is uniquely suited for analyzing the swifly changing present of our age of technology. Mass media and communication, which were developed and refined in the U.S. since the 19th century rise of mass-market newspapers, cannot be fully understood with European models. It was McLuhan who forecast what my generation lived, from transistor radios and stereo headphones to today's 100 cable channels.

Education must be purged of desiccated European formulas, which burden and disable the student mind. We must recover North American paradigms and metaphors, to restore the North American idiom to academic discourse. Media and Internet communications are a Jamesian and Joycean "stream of consciousness," fluid and mercurial, and our young people -- from the brilliant Web entrepreneurs to the ingenious pirate hackers -- occupy a radically different mental space than the valley of death of pre- and postwar Europe. As I know from my work with Salon, McLuhan's "global village" has come to pass. Every day, the Web is fulfilling the 1960s dream of expanded perception or cosmic consciousness.

In his 1837 lecture "The American Scholar," Emerson says, "We have listened too long to the courtly muses of Europe." Of Americans, he vows, "We will walk on our own feet; we will work with our own hands; we will speak with our own minds."