How I learned to stop hurrying and love the Great Barrier Reef. 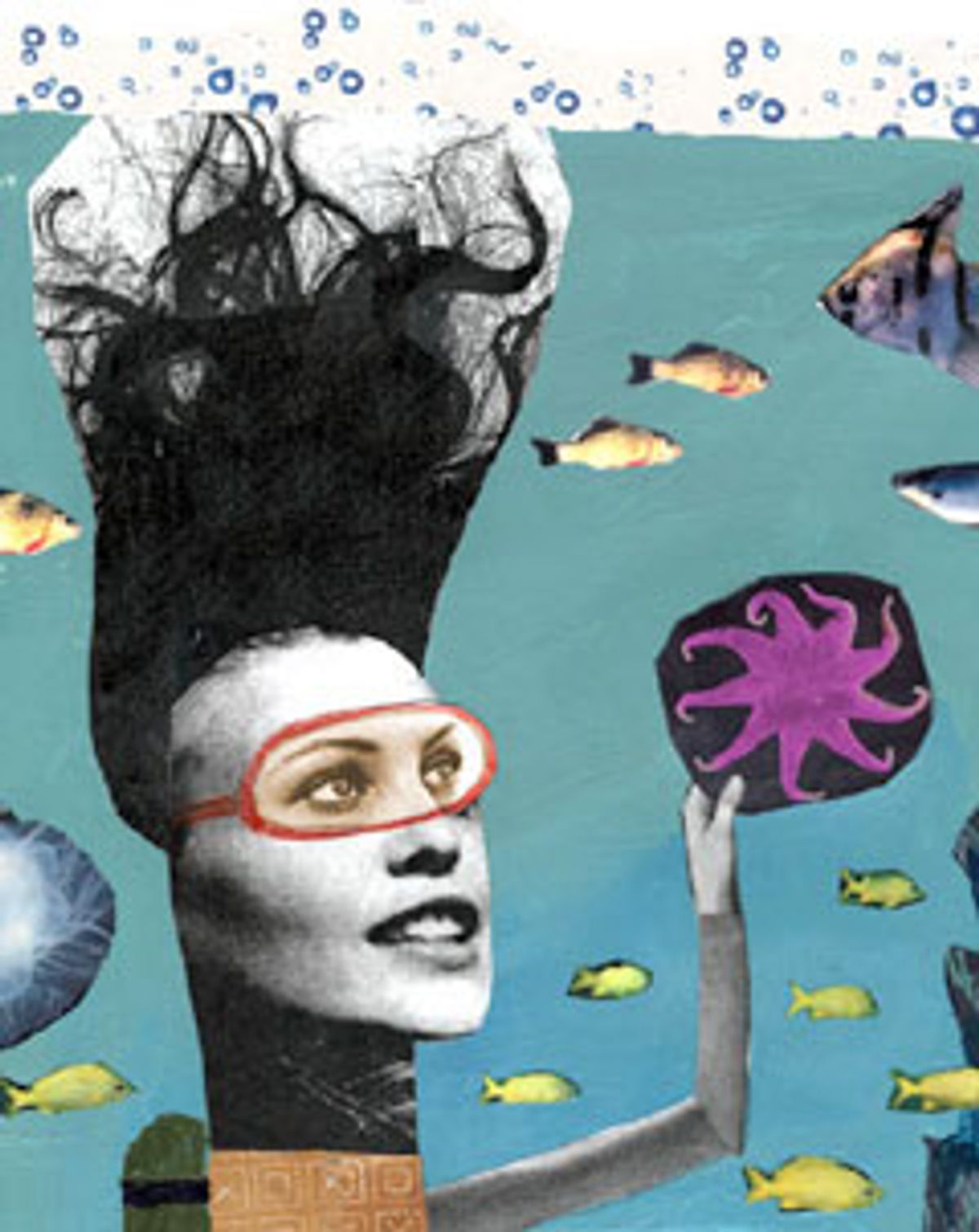 Outside, the tropical Queensland evening
is balmy and fragrant. Brilliantly
colored parrots and myna birds rustle in
the fronds of the coconut palms and, if
you look closely, you might catch sight
of the region's otherworldly flying
foxes as they begin their nocturnal
visit to the mango trees littering the
roads and lawns with their luscious
fruit. A few blocks away, the Reef
Hotel Casino glitters and, even closer
by, international hordes of jolly,
youthful hostel guests have piled into
the pubs to listen to blues bands
imported from Chicago and suck up ample
quantities of Fosters and XXXX ale. And
they'll still wake up rosy-cheeked and
ready for action in the morning.

So why has a crowd of 20 or 30 people
chosen to perch on folding chairs, mugs
of weak milky tea balanced on their
knees, in a rather Spartan room with
nothing but a slide show and a lean
Irishman with a fanatical gleam in his
eye by way of diversion?

The Irishman stalks back and forth
across a low plywood platform. He leans
forward; he crouches; he stretches tall.
His voice ranges from tent revival
preacher boom to Monty Python lunatic
screech as he veers from thundering
pronouncements to the high-pitched tone
he uses to talk about the "teeny-tiny
microscopic animals" who built the
titanic wonder we've all come to this
remote place to see: the Great Barrier
Reef.

The reef is a Mecca of sorts for scuba
divers. I've traveled all the way from
New York, spending almost 24 hours
on or between planes, to get here. More
experienced diver friends were silent
for a few moments when I'd told them
where I was going -- did they think the
trip would be wasted on me, a mere
novice and someone likely to spend most
of my underwater time fussing with my
mask, equalizing the pressure in my ears
and double-checking my air gauge?

The reef, as Paddy Colwell, the
Irishman, reminds us, is enormous. Its
area is larger than that of Great
Britain, half the size of Texas, and it's
visible from the moon. Every bit of it
was created by those teeny-tiny
microscopic creatures, the animals that
make up the myriad varieties of coral.
Colwell reminds us several times, pinching
up a fold of skin from under his tricep,
that "plants live in the flesh" of those
animals, a statement that never fails to
send an unpleasantly prickly shudder
down the back of my neck. All very well
for the coral, which thrives in a
symbiotic relationship with those
plants, but the thought of it gives me
the creeps.

This is only my second scuba-diving
trip, and I am sorely in need of
Colwell's teachings because I made my
inaugural dives in Hawaii. However
impressive the Great Barrier Reef may be
in theory, when you're diving, the most
you can see of this
discernible-from-the-moon structure is
the patch immediately in front of your
mask. And unlike the dive spots in
Hawaii -- where we could hardly turn
around without tripping over moray eels,
octopuses, sea turtles, rays, shrimp,
dolphins and hallucinatory clouds of
bright butterfly fish -- the parts of
the reef I've visited so far seem
relatively underpopulated.

What I need to do, as Colwell explains,
is look closer, look slower and look
smarter. He passes around the chalky
skeletons of various corals, teaching us
their names: brain coral, staghorn
coral, boulder coral, fan coral, all of
which, in a rare example of typological
good sense, look exactly like the things
they're named after. He explains that if
you wait patiently by a pockmarked
specimen of brain coral, the tubeworms
you frightened into hiding with your
typical, blundering human approach will
reemerge. The worms live in burrows
right in the brain coral (another
prickly shudder at that one), but they
stick out their frilly heads to sweep
tiny microscopic food particles from the
water.

Colwell, a marine biologist and a native
of Dublin, later tells me the eventful,
if somewhat confusing, story of how he
came to be doing an educational slide
lecture called Reef Teach six nights a
week in downtown Cairns. It involves
teaching high school biology students in
Ireland and ex-prisoners in Boston,
diving with BSAC (British Sub-Aqua Club)
in "zero visibility bog lakes in
Ireland," taking a courier flight to
Melbourne, trying to open a pub in the
Outback, discovering he'd lost all his
savings through an investment outfit
called a building society, driving
backpackers around in a van and becoming
a dive master in Queensland where he
quickly grew outraged at the divers'
lack of sound marine biological
knowledge. His narrative is laced with
what are no doubt well-grounded
diatribes against tour operators, marine
park administrators, agribusiness,
ecotourism and, understandably, building
societies.

One by one Colwell can testily count off
the common misperceptions burdening
visitors to the reef. They think that
sharks must keep moving or they'll die.
They think that giant clams live to be
200 years old ("ridiculous!") and will
clamp down on the extremities of divers
until they drown. They think that
barracuda are dangerous to humans. In
fact, most of the creatures people
assume pose a threat to divers --
sharks, manta rays, giant clams,
barracuda -- are harmless. The waters
off tropical North Queensland do contain
their share of deadly nasties, but these
tend to be decidedly unglamorous: the
venomous box jelly fish, the stone fish,
the pretty little cone shells that you
must never, ever pick up.

Yet, for those who look closer, glamour
isn't hard to find. If Colwell's your
dive guide, he promises to show you 1)
fish changing color, 2) coral changing
color, 3) cleaning stations where sea
creatures stop by for a scrub-down
courtesy of parasite and algae-eating
fish and 4) fish swimming upside down.
On three nights per year, he can show
you the only animal mating ritual
visible from outer space, the mass
spawning of the reef's coral. This,
alas, is not one of those nights, but
Reef Teach does sell a video of the
event (complete with New Age music),
showing the coral releasing vast pink
clouds of eggs and sperm. It's not just
the invertebrates who carry on
orgiastically. "Lots of coral fish
change not only color, but sex as well,"
explains Colwell, conjuring up images of
flamboyant, transsexual marine revels
that would put San Francisco to shame.

And the pageant even has a villain
(besides humanity and its predictable
depredations): the spectacularly
sinister Crown of Thorns starfish. This
is not your garden variety seaside
charmer -- believe me, no one will ever
manufacture darling little pastel guest
soaps in the shape of these beasts. The
army-green Crown of Thorns has up to 21
legs, each one bristling with venomous
reddish spines. It looks like it just
arrived from a planet near Alpha
Centauri with an extensive array of bad
intentions. It has repulsive eating
habits, ejecting its stomach out of its
mouth to envelop a likely patch of
coral, releasing enzymes and absorbing
the digested microscopic animals, plants
and all, leaving behind nothing but
the bleached skeleton. The voracious
Crown of Thorns has reached plague
proportions in the Great Barrier Reef,
laying waste to vast areas of coral.

Reef Teach has a somewhat uneasy,
semi-official relationship with most of
the area's dive-boat operators, a
situation that Colwell attributes to the
fact that he zips blindingly from 0 to
60 on the ol' exasperometer whenever he
hears dive guides "leave out very
important facts" about the reef's flora
and fauna. But every boat I boarded had
at least one snorkler or diver who'd
seen Colwell's show and couldn't stop
praising it, how it had made the
baffling, alien undersea world not just
more comprehensible, but even more
beautiful.

I was one of them. I learned to stop
rushing through the towers of coral. I
saw the crumbly trail of sand emitted
from the back end of a shimmering
turquoise parrot fish and knew it for
the remains of his coral dinner. I got
close to a long strand of gorgonian
coral and spotted a dainty, bugged-eyed
gobi fish racing up and down its length,
the only traveling the little guy will
ever do; he reminded me of a Samuel
Beckett character. I swam through a
meadow of violet staghorn coral and,
when I spotted a Crown of Thorns
munching on one corner of it, knew that
in perhaps a week or two it would be a
wasteland of white. That giant clam with
a shell-span of nearly 3 feet didn't
faze me a bit.

Hovering over the undulating tentacles
of a stinging anenome, I saw a piebald
clownfish (a notorious sex-changer and
immune to the anenome's venom)
luxuriating in perfect safety within
them like a starlet among her
bodyguards. I drifted slowly past a
massive boulder coral and watched it
blossom with dozens of purple spiral
frills: Christmas-tree tube worms,
looking like the world's most festive
cocktail umbrellas. I noticed that
every fish I encountered stared at me
with an expression that I can only
describe as aghast, and remembered what
Colwell had said: "These fish are at
home." How would I react if they
suddenly appeared in my living
room, scrutinizing me as I munched my
morning bagel? I suspect they'd find me
with much the same demeanor.

I even saw fish and coral change color,
though I never saw anyone swimming
upside down -- except that is for
Trevor, a diver from Yorkshire, England, who first
spotted the clownfish and graciously
pointed them out to me. Trevor is one of
those stupendously modest guys who
professed to be a beginning diver just
like me. Turns out, though, that while
he hadn't strapped on an air tank in
quite a few years, he once traveled the
globe, diving in some of the world's
most legendary reefs -- including the
Red Sea -- and in some kind of
professional capacity. (I imagined him
dropping from a helicopter for an
undersea reconnaissance mission.)

Trevor revealed himself to be an old
hand by following Colwell's
recommendations to a T. Every time I
turned around, I saw him drifting
motionless and serene, his arms folded
to keep his gauges from banging against
the fragile coral. He knew how to take
it slow and look carefully, all right.
Not only did he spot the pretty little
clownfish, but once we got back to the
boat he told me he'd spotted a couple of
turkey fish -- highly venomous, visually
stunning porcupine-like fish with
permanent scowls who look (in photos at
least) like traditional Japanese
warriors -- lurking in a little cave on
another dive.

I didn't come back from the reef
brimming with outrageous tales of
spotting hammerhead sharks, frolicking
with dolphins, hand-feeding a giant
potato cod or hitching a ride on a manta
ray. Those kinds of stories are like
trophies that veteran divers haul out at
the end of the day as the boat chugs
slowly back to the dock, and my
rapturous descriptions of tube worms
aren't likely to impress anyone. But
thanks to Colwell (and Trevor) I came
back to New York with a philosophy
rather than a fistful of yarns: Slow
down and look closely. And who knows, it
might prove as fruitful in Gotham as it
did on the Great Barrier Reef.