John McCain's first wife won't say a harsh word about the man who dumped her. Is she a spineless wimp or a quiet hero? 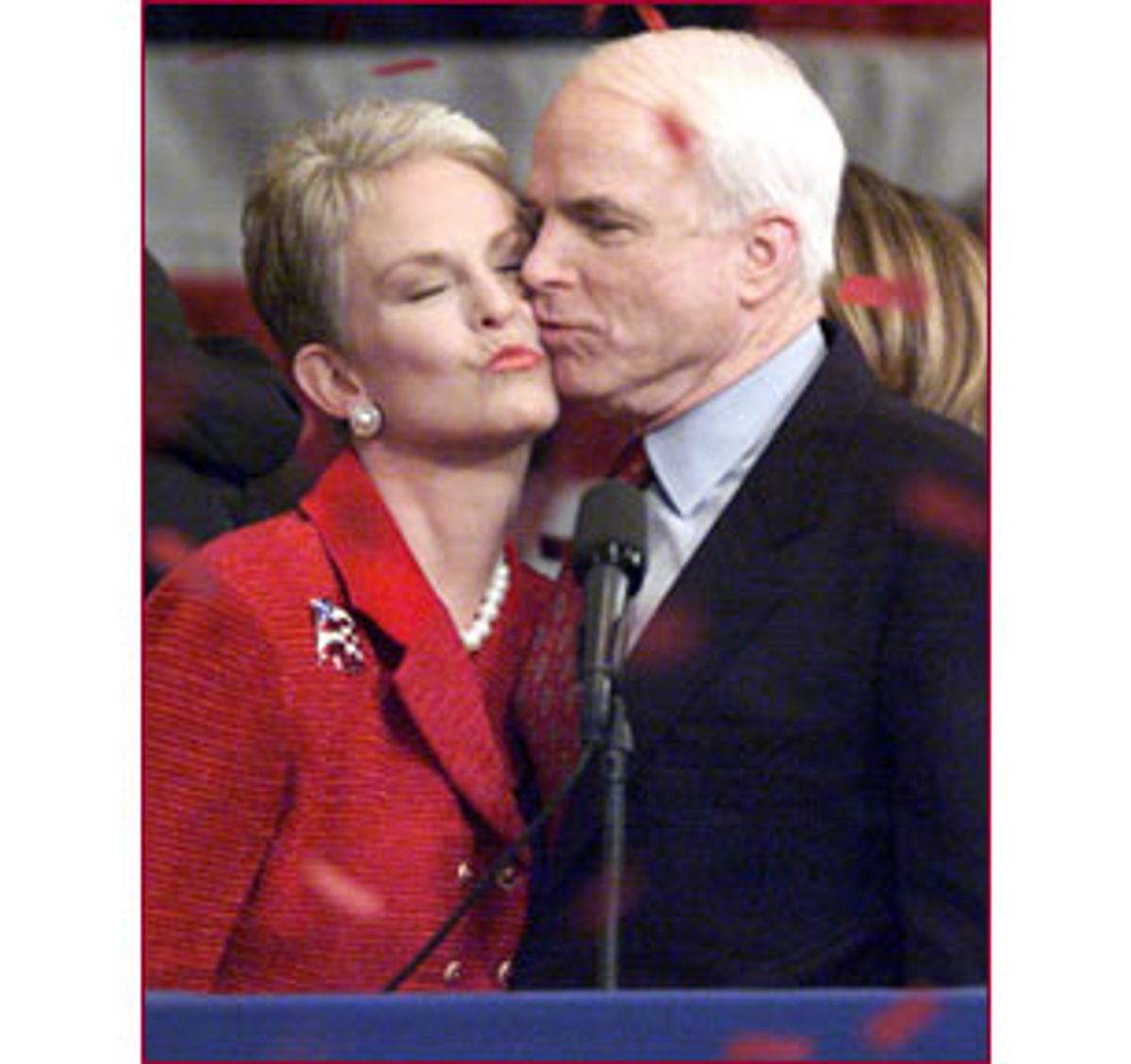 With a great deal of restraint and not a trace of opinion, the New York Times last week reported details of what writer Nicholas Kristof calls "an awkward time" in John McCain's life. The story, related in delightfully quaint language, managed to be fairly astonishing regardless of one's feelings about the Republican presidential candidate whose most familiar handle is that of "war hero."

It seems that McCain, who had once revealed to fellow prisoners of war in Vietnam that he wanted to be president, was restless in 1979. As Navy liaison to the Senate, he didn't have the career momentum he had counted on to propel him into an admiralty and on to the White House. He was 42, mired in stifling ordinariness. (Civilians call it "midlife crisis.")

But McCain was making bold career moves on the home front, hotly pursuing a 25-year-old blond from a wealthy Arizona family -- while married. Carol, his wife at the time, had once been quite a babe herself apparently, until a near-fatal car accident (while her husband was in Vietnam) left her 4 inches shorter, overweight and on crutches. The couple had three children, whom Carol cared for alone while her husband was in Vietnamese prisons.

McCain's strategy worked perfectly: After chasing Cindy Hensley around the country for six months, he closed the deal late in the year, had a divorce by February and was married to Hensley shortly thereafter. Bingo! McCain was a candidate for Congress by early 1982, his coffers full, his home in the proper Arizona district purchased.

The story is compelling -- and repellent -- for a lot of reasons. And it raises some familiar questions. We have to wonder why Americans are able to excoriate a presidential candidate (or president) who cheats on his wife but accept one who did the same thing with the concentration and energy of a military strategist. Is it because McCain didn't get caught? Is it because he married his mistress? At this point, after much navel- and penis-gazing, it seems like a moot question, if only for reasons of sheer exhaustion.

The real riddle in that New York Times story, and in the life of John McCain, is his ex-wife's apparent acceptance of his actions and her continuing support. Says Kristof, "No candidate could be luckier in his choice of an ex-wife than Sen. McCain, and he must be the only politician around who could cheat on his wife and divorce her and still get her support and her campaign contributions today."

It is mysterious and yet incredibly important to McCain's legend. Even the people who might have felt some outrage while reading about McCain's shenanigans were probably mollified by the fact that his ex-wife seems to be eternally supportive, even cheerful, after experiencing such incredible cruelty. It becomes very easy to forgive McCain once his wife has: Heck, if it's OK with her, it's OK with me! The whiff of impropriety, the stench of character flaw is suddenly removed. O lucky man!

I was not prepared to vilify the magnanimous homewrecker after learning of his "awkward time." Like a lot of voters, I choose to focus on the issues. But I could not help being fascinated by Carol McCain. What is up with her? And then it occurred to me that what John McCain has benefited from here is the same reward enjoyed by ex-husbands everywhere in the aftermath of bad behavior and take-no-prisoners divorce when the person they are dumping and dumping on is a mother. In particular, a mother who adores her children and is painfully aware of conventional divorce wisdom that says never, ever criticize the departing dad in front of his children. It is an act of maternal suicide.

How many women do you know who willfully, in public and even in private, refuse to say an unkind word about the father of their children after divorce? I know many. They are all well-versed in the terrible damage that dissing daddy can do to children, who are fiercely resistant to any information that puts their father in an unflattering light. They also know that a child's reaction to this sort of information is often anger, and a distancing from mom, who covets her relationship with her children even more in the wake of abandonment.

The constant tongue-biting, the squelching of the truth, the careful avoidance of history can be brutal and is, in many ways, heroic. And yet it is mostly unsung, sometimes completely undetected. I suspect that many of those who read about McCain's "troubled period" (don't you love the New York Times?) will assume that Carol McCain is some kind of ditsy or emotionless punching bag without the good sense to hate her husband. They might assume that she somehow deserved to be humiliated and left to eat her husband's dust as he raced to claim his just reward.

How many will guess that Carol McCain is quite possibly a hero of a different kind of war? How many will read between the lines of her exalted ex-husband's legend and decide that she is simply one of the most courageous examples of a wounded mother who has loved and protected her children at all costs?