"The Vision of Emma Blau" by Ursula Hegi

In a sweeping and ambitious novel, the author brings home the plight of German-Americans during and after World War II. 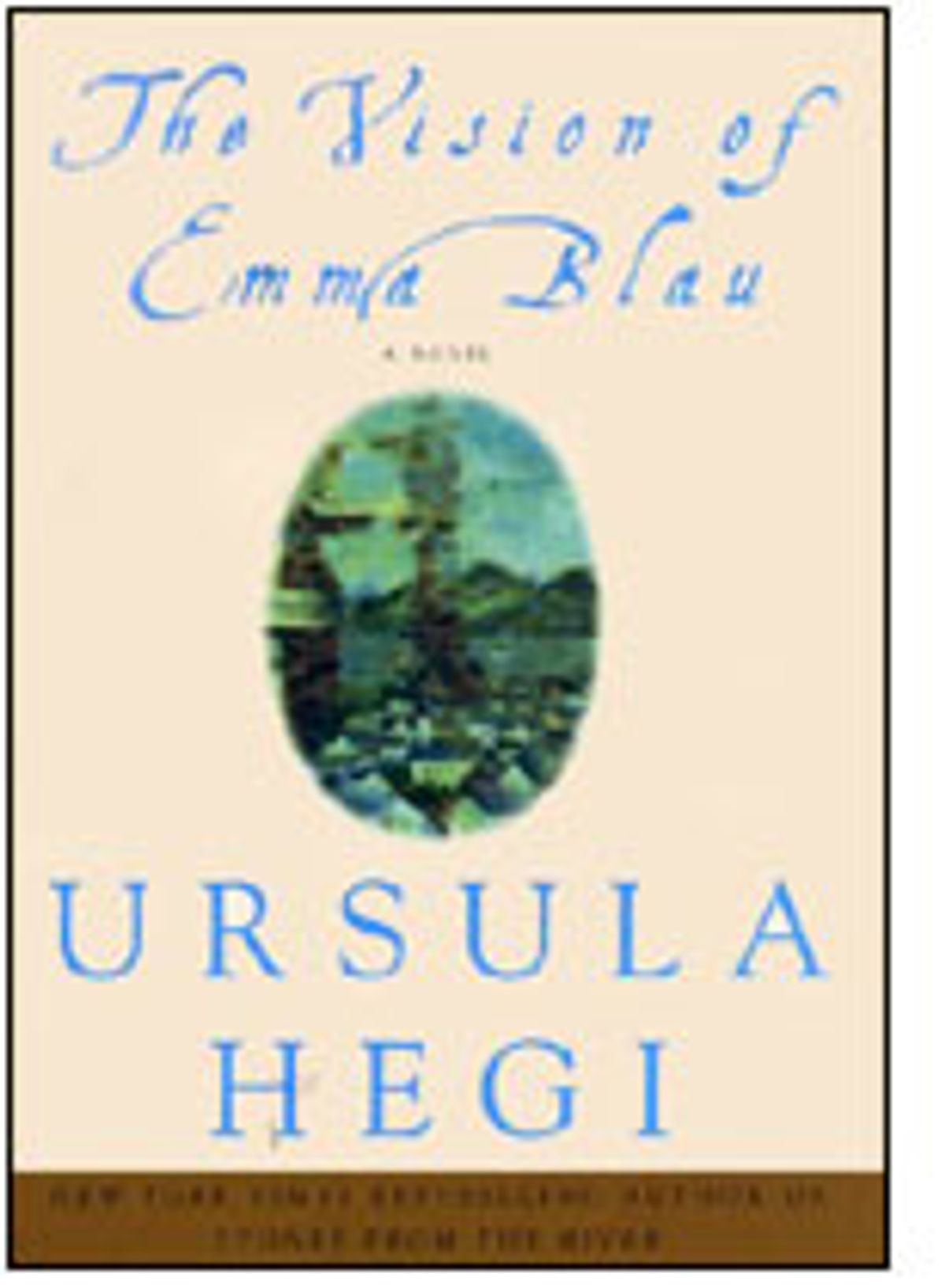 "To detect rot is often impossible in its early stages," German-American novelist Ursula Hegi warns in "The Vision of Emma Blau." "It starts beneath lush surfaces, spreading its sweet-nasty pulp, tainting memories and convictions. It entangles. Justifies." Hegi might be referring to the insidious poison of Nazism she diagnosed in several of her earlier works. But her latest novel is set almost entirely beside a lake in New Hampshire, and the corrosive agent is not fascism but an excessive devotion to the Wasserburg, an outlandish white elephant of an apartment building.

The Wasserburg is a formidable creation, built in the first decade of the 20th century by Stefan Blau, a German immigrant blessed by luck and cursed, to a certain extent, by an unstoppable determination to prosper in his new homeland. For the Wasserburg Stefan acquires "the best of everything: Italian marble and Dutch tiles; stenciled beams and oriental rugs; German carvings and crystal chandeliers; balconies with flower boxes atop the ornate railings; a stone fountain with two tiers like something you might see in picture books of Venice." The refinements of the old European world are reproduced on floor after floor on the grand scale of the New World, much as the Blau family's internal stresses are echoed in generation after generation of descendants.

Readers may recognize Stefan Blau and his third wife, Helene Montag, from Hegi's stunning 1994 novel, "Stones From the River," in which they still lived in Burgdorf, Germany, the little town perched on the banks of the Rhine, just as the Wasserburg towers over Lake Winnipesaukee. Helene is the new novel's most carefully drawn character (assuming that the Wasserburg is not a character in its own right). An intelligent and passionate woman, she marries the man she has fantasized about for years only to discover that he has wedded her less for passion than for pragmatism: Stefan brings Helene across the Atlantic with the unspoken expectation that she will rear the children of his previous marriages without adding any new babies to their number.

The title character, Emma Blau, is Stefan and Helene's granddaughter, a child for whom the Wasserburg is a living creature. In Hegi's credible and unsentimental depiction of childhood play, Emma invests the building with a life spirit whose shuddering breath she hears emanating from the top of the elevator shaft: "Sometimes she felt she was the center of the house, breathing its breath song, while other times the house was at the center of her like a pulse that warmed her as she held it safe within her body." Emma's attachment to the building becomes less charming once she reaches maturity and her bond to the Wasserburg is stronger than her feelings for her family.

Hegi is a terrific storyteller, and "The Vision of Emma Blau" is her most ambitious novel to date. It spans nearly an entire century and brings to life the very different cultures of Burgdorf and Winnipesaukee. In "Stones From the River," Hegi had an entire novel to create an ornate portrait of the youth and middle age of a dwarf woman. In this later work, she gives herself less space to develop many more characters, whose most private selves she manages to sketch through glimpses of their thoughts and impulses. These passages appear in italics, animating the surface of the narrative like raindrops falling on a vast and encompassing lake.

The many German phrases and place names that Hegi and her characters use are also italicized, as if they share the secret magic of those thoughts and desires. Hegi shows how, as the United States enters the Second World War and the Blaus' Yankee neighbors begin to treat them with suspicion, the family begins to suppress elements of its once-proud German identity.

Despite the tremendous volume of Holocaust-related literature in print, few books describe the peculiarly uncomfortable situation of German-Americans during and following the war. It was a time when even educated people, like Yale historian Peter Gay, a German-American Jew, felt that "the only good German is a dead German." Hegi has made this literary niche her own, interviewing many men and women who emigrated from Germany to America after the war, as Hegi herself did. She recounted their experiences in her 1997 work, "Tearing the Silence: On Being German in America," and at times "The Vision of Emma Blau" recalls these testimonials.

While this is a relatively fresh literary perspective, Hegi is sometimes too simplistic in her characterization of German attitudes. When Helene's grandson is taunted at school for having a "Nazi" surname, the boy's mother sets the record straight: "Nazis were one kind of German," she says. "The bad kind. Bad, evil people. But what I want you to understand and remember is that not all Germans are Nazis." Granted, Hegi is recounting a conversation with a child. But there isn't much in the novel to render this account any more ambiguous or real. Hegi feels obliged to prove that the Blaus aren't Nazis, but it might have been more interesting to see a typical middle-class German family in which the responses to Hitler were complicated and fluctuating -- shame mixed with pride in Hitler's autobahns, or something like that. It's all very well to vindicate German-Americans who played no part in the war, but this isn't a book for children, and the novelist could trust her readers with slightly more difficult and credible material.

Hegi is at once a highly sophisticated, perceptive storyteller and a rather coarse writer. She's capable of beautiful metaphors but also of poor grammar. Her characters are idiosyncratic, and yet, set as they are in a busy group portrait, ultimately they seem reduced to their compulsions. One binges and vomits, another slices her flesh. Their motivations become obvious. A daughter loves a man because he reminds her of her beloved grandfather; a boy portrayed with great sympathy and subtlety as a child appears as an adult with few attributes but his tortured love for his father and his homosexuality. It is a measure of Hegi's strengths that these simplifications seem like a betrayal of the delicate perceptions she has led her readers to expect.