A flood of relief

An international showcase of aid in Mozambique could mean a long-term boon for the impoverished country. 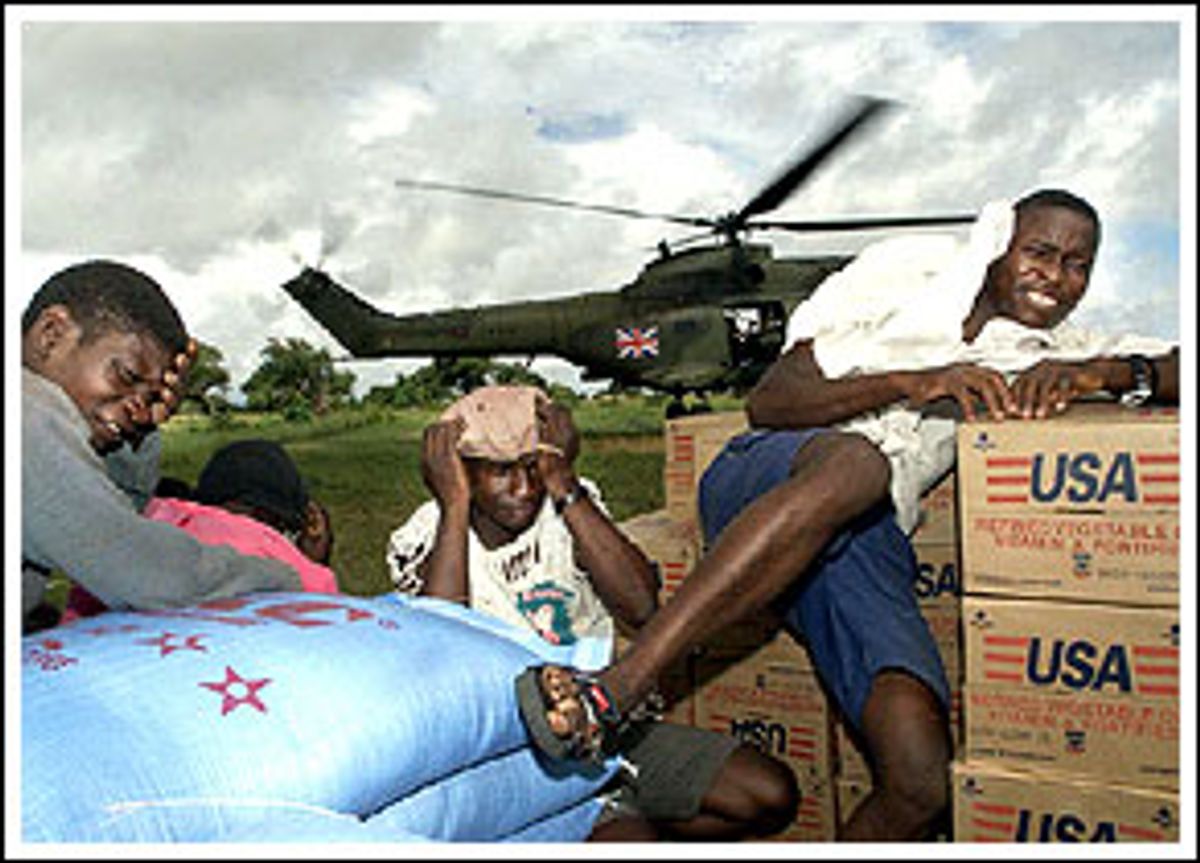 At 6 years old, Mahelane Mabunda stands barely waist high, and his voice is an almost inaudible whisper. "I don't know where my mother is," he says, standing in the crowd in this makeshift relief camp, where about 39,000 people have converged since being washed out of their homes in Mozambique's disastrous floods. "She was up in the tree."

When the South African Defence Force rescue helicopter passed overhead more than 10 days ago, it spotted Mahelane and his family perched precariously on the branch of a tree, whose trunk was submerged in 10-foot floodwater. Winching up the children in a hoist, the pilot left the boy's mother behind, perhaps thinking he would return to fetch her. But she has not been seen since.

"Some parents sat in trees for days," says Alda Macuacua, a Roman Catholic nun from Xai-Xai, the capital of the stricken Gaza Province. "They might have fallen down from hunger." Last week, Macuacua made it to this village to help. Since then, she has found 58 children wandering alone in the camp, having lost their parents in the frantic scramble to safety.

In the devastated flood areas of southern Mozambique, there are countless such tales of heartbreak and loss. From the helicopters crisscrossing the huge terrain, one can see the destruction stretching in all directions. Tiny groups of cows stand dazed and marooned on tiny patches of mud, unable to reach any grazing land. Fields of crops have turned into lakes, wiped out just weeks before the late-summer harvest. The grids of town maps have vanished. From the air, only the tips of electric poles and the red roof tiles offer clues to what lies underneath. There are bridges whose spans have disappeared underwater, and roads and rail lines that have been chopped in pieces.

Until two weeks ago, Cheaquelane was a thriving community, linked by a main national road to the capital, Maputo, 100 miles south. Now, it is an island surrounded by water, the road having been cut in four. The village has become the country's biggest relief center, most of its victims having come from flood-soaked Chokwe, about 30 miles east. Tens of thousands of people have camped on open ground here for a week, having trudged for miles through shoulder-high water and mud to find the nearest dry land.

In Chokwe, where about 15,000 people normally live, there hasn't been a drop of clean water to drink or bathe in since Feb. 26, when the pounding floodwaters came roaring through the Limpopo River Valley, "sounding like a train coming," as one local man put it. Repairing the shattered water pumps would be useless, since the electricity to run them has likewise collapsed. Instead, the few hundred people remaining in the town are drinking increasingly contaminated floodwater, some of it mixed with chlorine in an attempt to kill the germs.

When I visited Chokwe's Catholic mission hospital on Monday, flood survivors looking for help had jammed the dark hall. The sole nurse on duty, Gloria Rivez, a Spanish volunteer for Doctors Without Borders, had arrived just that morning.

First, Rivez organized a group to scour the town and pick up the corpses that began to surface as the floodwaters receded. A group of men collected six bodies, removing them to the back of a pickup truck. Then, she dispatched others to try to scrub the mud off the infirmary's supplies, in a vain effort to save its small stock of bandages and antibiotics. "We have to prepare ourselves for people coming back to the town in a week or so," she said. "At the moment, people know there's no food or water in town."

Cyclones and floods are a regular event in Mozambique. But the staggering damage of the latest one caught both the government and aid organizations off-guard. Pounding rains began early in February. Then, on Feb. 22, the cyclone Eline hit Zimbabwe and South Africa. It burst the banks of the giant Limpopo River, the artery that links those two countries to the Indian Ocean, through the vast Limpopo Valley in Mozambique.

Within days, Mozambique's valley communities were drowning in floodwater. Neither aid workers nor the government has an accurate tally of the death and destruction. Aid workers think about 350 people have died, and that about 600,000 people have lost crops and animals. About 250,000 people are now being fed with donations from the United Nations' World Food Program.

The disaster has become an international showcase for relief. For weeks after the floods began, a small group of South African helicopter pilots flew rescue missions over the south. And Maputo's airport, usually a tiny operation with a one-room traffic control department, has been transformed into an international staging post. Tents and hangars serve as strategy rooms for at least six military forces.

On Tuesday morning, the U.S. Air Force finally rolled into town, in the first of five huge C-130 Hercules cargo planes. But it had been beaten to the relief operation by Spanish, German, French, British and even Libyan military forces, which have sent two cargo planes to offload food and medicine. Maj. Gen. Joe Wehrle, task force commander, described the U.S. operation as "large": By week's end, there will be more than 500 American military personnel in the region.

"I don't remember any operation that has been so dependent on helicopters," says Brenda Barton, a spokeswoman for the World Food Program who has worked in African disasters for years. "It's very, very costly and gives very little bang for the buck."

In fact, no one has yet tried to tally the cost of this giant operation. And while many aid workers have done so privately, no one has officially computed the cost against the relatively low loss of life -- compared, for example, with the average Bangladeshi monsoon that kills thousands of people.

Privately, aid workers admit that the huge response is partly a factor of Mozambique's welcoming features. Maputo, a port city with stunning white beaches, a palm-lined seafront and excellent prawns and lobsters, is a 45-minute flight from Johannesburg, South Africa, and for decades was a beach playground for South Africans.

Most Mozambicans are crushingly poor -- the average household income is about $200 -- and the country faces major malaria and AIDS epidemics. About 1.8 million people are infected with HIV, according to the United Nations.

The country of 17 million has become a darling of Western governments. Since signing a peace treaty with the South African-funded Renamo guerrillas in 1992, it has never returned to battle. After dismantling a bungled socialist system, essentially under orders from international financial institutions, Mozambique now has one of the world's fastest-growing economies. Its average annual growth rate was about 10 percent between 1996 and 1998. "The country will do just fine," says Sherri Archondo, deputy resident representative for the World Bank in Mozambique.

Millions of rural farmers have seen none of the boom, however; even before the floods they were struggling to survive.

Ironically, the current disaster may turn out to be a blessing for the average person. A casual glance at the congested tarmac at Maputo Airport reveals that many Mozambicans may actually get some benefits from the calamity. Helicopters shuttling into the interior are stocking rural warehouses with sacks of donated grain and remote clinics with boxes of medicines.

"A lot of stuff has come into the country," says Brian MacMahon, an executive of Goal, an Irish relief organization that has run projects in Mozambique for more than a decade. "If anything, it's focused attention on this place. It looks like many organizations will follow the emergency with a rebuilding program."