Who owns your DNA?

Genetic research that can save lives is often stymied by biotech companies' greedy patent claims. 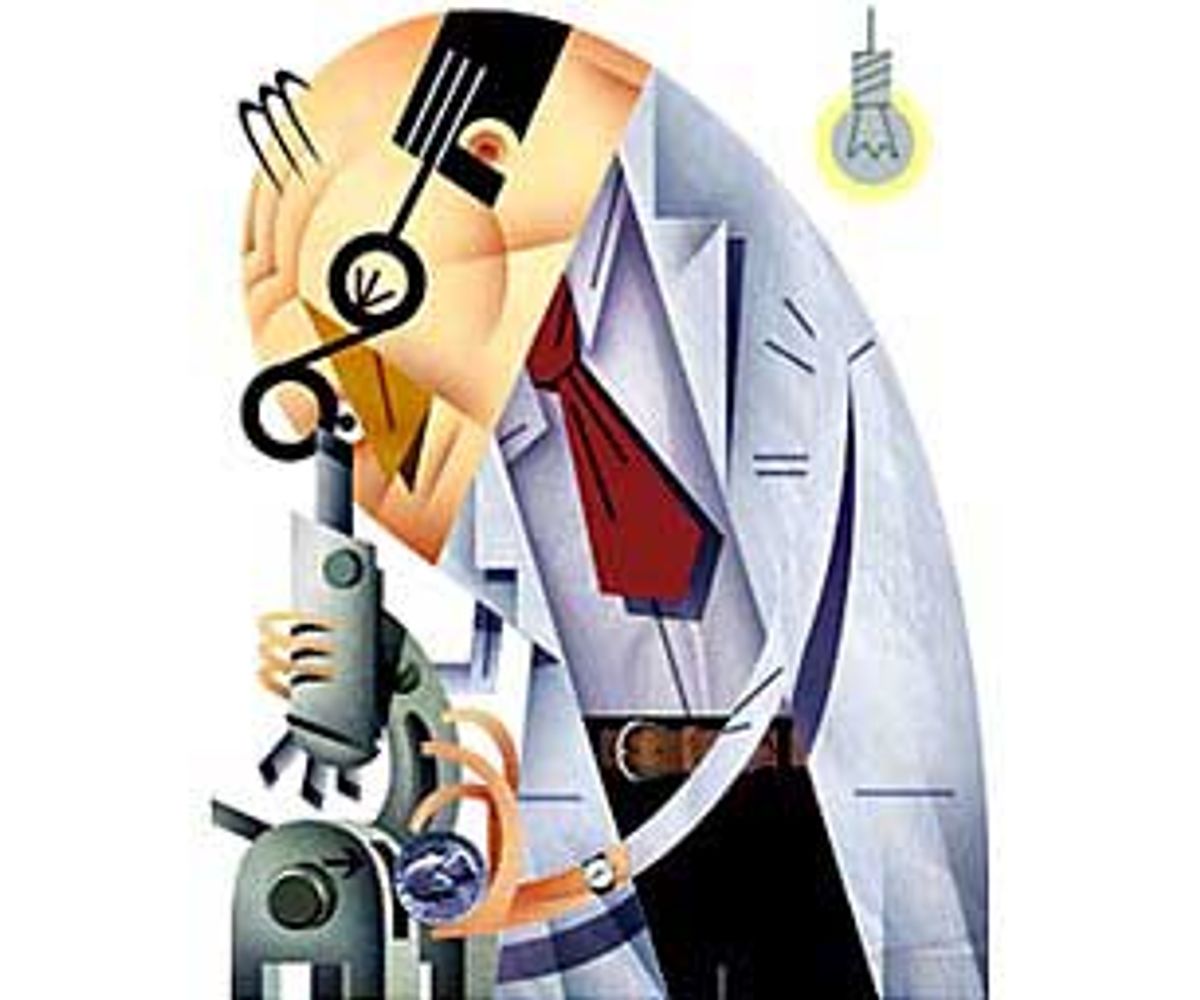 For years, the parents of children suffering from an implacable genetic disorder called Canavan disease dutifully packed off their blood and tissue samples to Dr. Reuben Matalon, a researcher at Miami Children's Hospital. These shipments were an altruistic, volunteer effort by a devastated group of people -- their own children were dead or dying, but they hoped to prevent the births of more children with the disastrous, inevitably fatal brain disease.

In 1993, their donations paid off when Matalon, parsing the families' DNA, was able to identify a series of gene mutations on chromosome 17 that appeared to indirectly cause the disease, which has mainly affected Ashkenazi Jews. His work raised hopes that Canavan would go the way of Tay-Sachs, a related illness that has nearly disappeared in the Jewish population since couples began routine screening for Tay-Sachs in the early 1970s.

But the Tay-Sachs screening program, apparently, belonged to a kinder, gentler era in medicine. In November 1998, Miami Children's Hospital announced plans to strictly license its patent on the Canavan gene. Not only did Miami Children's demand that clinicians pay a $25 royalty (eventually lowered to $12.50) each time they performed the test; it also put a cap on the number of tests any academic lab could do.

The hospital's stringent licensing agreement is part of an alarming trend in biomedical research. Some biotech companies, universities and even hospitals are seeking to recoup their costs quickly by patenting discoveries that many believe shouldn't be patented at all. The patent license disputes threaten to close off research and clinical applications of some of the biomedical discoveries that Americans have paid billions to enable.

Some of the leading genetics labs in the country would not accept Miami Children's licensing terms and as a result had to stop testing for Canavan disease. "It's a wretched contract and we refused to sign it," says Debra Leonard, director of the molecular pathology laboratory at the University of Pennsylvania hospitals in Philadelphia. Shocked patient groups and scientists could only watch in dismay as bickering lawyers put a squeeze on information they'd worked long and hard to generate.

"We gave our DNA and that of our children to help develop testing and prenatal diagnosis. We sent our blood and skin samples to a doctor at Miami Children's Hospital," says Dr. Judith Tsipis, a Brandeis University biologist whose son, Andreas, died of Canavan disease in 1998 at age 22. "Is it right that they use our genes -- given to help others -- in a way that restricts access and increases cost to testing?

"My understanding from the hospital was we needed to file the patent just so I could work with the gene myself," says Matalon, who has since moved to the University of Texas hospital system, where he continues to work on Canavan disease. "I had nothing to do with their licensing decision and I got no penny from any patent."

Canavan disease is one of a growing number of conditions in which patent fights have intruded into genetic medicine. Ninety percent of the 150 U.S. clinical genetics labs in a recent survey reported having withheld tests because of onerous patent claims. Genes for early-onset Alzheimer's and breast cancer are among the most common DNA sequences saddled with restrictive licenses.

Doctors whose clinical practice involves devising means to detect disease-causing genetic mutations are being told they can only perform such tests under licensing agreements that are often so strict the doctors' institutions refuse to sign them.

"This is my medical practice. I can't do what I was trained to do, and I spent a long time training to do it," says Leonard, who is also president of the Association for Molecular Pathology.

The problem will only grow with the approval of thousands of additional gene applications currently pending before the U.S Patent and Trade Office. "This is just the tip of the iceberg," says Leonard. The conflicts over genetic testing -- the first clinical application of the Human Genome Project -- are probably just an opening skirmish in a multisided war for control of the information, drugs and therapies that may arise from the genome discoveries.

Thanks to robots, supercomputers and brainy scientists, the government-led genome project is expected this year or next to finish its sequencing of the estimated 100,000 genes in human DNA. But the mapping of the human chromosomes is really just the start of a new kind of biological understanding. Although scientists now know the DNA sequences of many human genes, they don't understand how most of them work.

While the rest of us await the integration of these molecules into an intelligible language of life, scientists, businessmen and the government squabble over what value to assign the millions of information snippets.

James Watson, who won the Nobel Prize in 1953 for discovering DNA's double-helix structure, resigned as the first director of the NIH genome institute in 1992 in a dispute over whether to patent DNA sequences that a scientist named Craig Venter had discovered. Venter also quit the NIH and formed a gene sequencing partnership with William Haseltine, a Harvard AIDS scientist. Haseltine and Venter now lead competing biotech firms that are racing a government-led consortium to decode vast quantities of human DNA.

Haseltine, Venter and other scientific entrepreneurs have submitted patent applications on millions of bits of DNA, many of whose function isn't clearly understood. The patent office recently raised the bar of knowledge it requires before issuing patents on genes, but Francis Collins, Watson's successor, worries that premature claim-staking on the genome could end up snarling research in legal battles for years.

Using the sophisticated databanks, most of them designed and run by the government, genome-analyzing companies have described possible functions for about half the gene sequences discovered so far. John Doll, who heads the U.S. Patent and Trade Office's biotechnology division, says his office will grant patents for genes when applicants can describe a plausible function for them based on computer searches.

A prime example was the patent awarded last month to Human Genome Sciences for a gene that codes for a protein involved in introducing the HIV virus into cells. When Haseltine filed for the patent in 1995, he didn't know the function of the gene, but was savvy enough to guess it might be a cell membrane receptor. In the meantime, AIDS researchers doing painstaking science uncovered the actual role of the gene. The awarding of the patent -- worth millions if the gene is used to create AIDS drugs or vaccines -- infuriated these scientists as well as patient groups that supported their research.

"Doesn't it bother you," Collins asked Doll during a conference in Washington on Thursday, "that your standard would allow patent protection for roughly 40 percent of human genes, and yet if you ask any working scientist what percent of human genes they know the function of, you'd get, maybe 2 percent?"

"Everybody's filing for these patents," said Doll. "Not just the Incytes of the world; zillions of universities are taking the same approach."

"I don't doubt it for a second but it doesn't make me feel any different," an exasperated Collins responded. "When there's a gold rush, a lot of people go to California."

Other scientists are less restrained in their attacks on the biotech industry. "The idea of patenting DNA sequences is abhorrent to me, but in particular, the way it's being done now is intellectually dishonest," says Robert Nussbaum, a molecular biologist at NIH.

Nussbaum, who works on Parkinson's disease, said the kind of gene patent applications that Doll's office has decided to approve are likely to be shaky in their claims. Even if correct, he said, such claims are based on searches of public databases and "are being done on the backs and shoulders of research funded by the public and charitable foundations. It doesn't seem right that these sequences should be taken and locked up for the purpose of profit making."

Doll points out that hard work has never been a requirement to win a patent from the U.S. Patent Office, which generally tries to be as friendly to patent applicants as possible. "We don't care how you find out something new, only that you're the first to find it," he says. And some biotech officials say that scientists are simply bitter at the fact that technology is transforming the manner in which biological information is gathered.

Officials at Incyte, a Palo Alto, Calif., company that sells its genome information to more than two dozen pharmaceutical and biotech companies, like to point to a discovery made last year by CV Therapeutics, a small California biotech company. Using Incyte's databases and a few simple experiments, scientists from CV Therapeutics were able to identify a set of genes involved in Tangier disease, a heart ailment discovered among people living on Tangier Island in the Chesapeake Bay. CV's discovery took two months, but it was listed by the American Heart Association as one of the top 10 discoveries of 1999.

"Medical research is increasingly a matter of using technologies to gather a bunch of pieces of information," says Lee Bendekgey, general counsel for Incyte. "It's really accelerating things and that's what matters. And when people make discoveries like that, they deserve both public accolades and rewards."

In the 1980s, in a more primitive era of genetics discoveries, it took Francis Collins several years to isolate and clone the cystic fibrosis gene. At the time it was one of the more remarkable chapters in genetics research. The University of Michigan, where Collins made the discovery, holds the patent on the gene. As it happens, Michigan doesn't charge researchers a dime to use it.

Of course, patent holders want people to use their inventions -- if no one uses them, they don't get paid. And intellectual property lawyers say that when the patents on the human genome get sorted out, relevant ones will be bundled into packages that can be licensed to researchers and doctors in useable form -- for a price.

When the Human Genome Project began, ethicists were primarily worried about whether knowledge from the genome would be used for genetic discrimination, or to create genetically enhanced children or eliminate the genetically unfit. But such concerns may be beside the point if the technology is too expensive for anyone but the rich.

Those who care for the genetically vulnerable appear most aware of this paradox. Judith Tsipis' son Andreas never learned to walk, talk or feed himself. But he could think -- and he had a good sense of humor, she says. Asked the difficult question of whether Andreas' birth should never have taken place, Tsipis shrugs off facile answers.

"Andreas was my child and I loved him dearly. He was loved and cared for superbly well but he still had a difficult life, especially toward the end. Would I have wanted him to be born? I can't answer that. But I'm working very hard for screening so that families have all the options, and one option is an abortion. The key thing you need is information, education, and the availability of testing."

"If patents hinder research," she adds, "it will make it harder for people to develop cures for these diseases."