Does Al Gore have a heart?

A new bio suggests that underneath the stiff, zombielike striver we've come to know is a real guy. 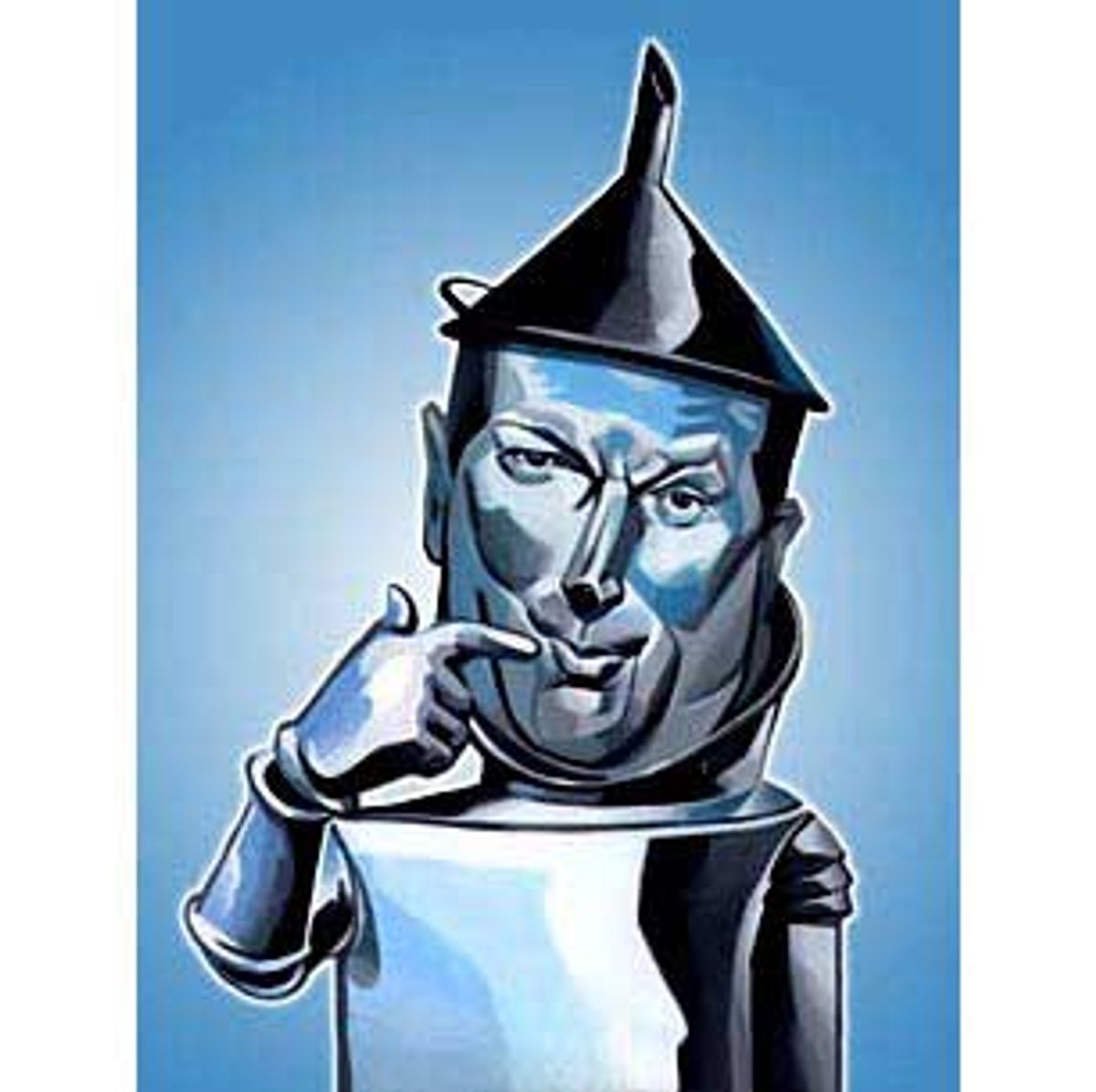 A source once told me, when I was writing an article about a famously nasty man, "It's true what they say about Bob: Underneath that mean, abusive guy is a pretty nice guy. But underneath that there's another whole guy who's really mean and nasty." So it is with Vice President Al Gore: Beneath the wooden, proper candidate is a funny, amiable guy. But underneath him is an emotionally isolated man of almost total opaqueness.

It's an intrepid reporter who volunteers to spend three years of his life examining the wild underbelly of a career as dutiful as Gore's. Newsweek reporter Bill Turque has returned with a thorough, fair and nearly complete biography, but I can't say that his investment of time and effort has entirely paid off: It's beige down there, all right. Turque turns in a very professional inventory of Gore's first 51 years, but only occasionally presents the contents in a light that gives us any new insight into Gore.

"Inventing Al Gore" has all the right pieces of the puzzle in place. The two biggest pieces are, of course, Albert and Pauline Gore, the political parents from Central Casting: he a bombastic, prideful Tennessee senator with a terrible score to settle (his 1970 reelection defeat) through his namesake; she a cooler, more calculating stage mama who is widely seen as the brains of the pair. These parents were always completely frank about the fact that they were grooming their son, from the time he was in short pants, to be president.

As a result, Gore was, from the start, a tiny politician: a pleaser of the kind who was always looking over the shoulders of his peers to the frowns and smiles of an older, sterner audience. There is a real poignancy to the story of Gore's upbringing, in which much of the warmth apparently came from the mothers of friends and the Tennessee women hired to look after "little Al" while his parents were on the road. (Pauline indignantly dismissed this portrait of Gore's childhood when the author interviewed her. Never, she told him, had she left her little boy "for more than two weeks at a time.") As Gore himself has from time to time acknowledged -- most completely in his ecological manifesto, "Earth in the Balance" -- he was an accomplished, compliant, uncomplaining boy whose chief concern was to reflect well on others.

These are the children who grow up hollow -- with a streak of what Turque identifies as grandiosity. It's the only way to explain why Gore, a man with a palpable conviction that he is usually the smartest person in the room, can't restrain himself from the weird little acts of self-aggrandizement that cause him so much trouble. It wasn't enough that Gore played an important role in garnering federal support for the immediate precursors of the World Wide Web; he had to tell an interviewer that he "took the initiative in creating the Internet." It wasn't enough that "Love Story" author Erich Segal had borrowed a bit from Gore's background in devising his hero; Gore had to tell reporters that his romance with Tipper was the model for the entire book.

The most sensational material in Turque's book is an old friend's claim that Gore smoked far more pot in his youth than he has previously admitted. The friend, John C. Warnecke, says that as a newspaper reporter in Nashville, Gore smoked three or four times a week, and didn't give it up until he ran for Congress in 1976. Gore's account, laid down during his 1988 presidential campaign, is that he tried pot only on "rare and infrequent" occasions and gave it up entirely in 1972.

Turque's version seems very credible, partly because other old pals who declined to talk to him about the issue did so in a way that tacitly acknowledges that Gore is vulnerable here. Even so, Warnecke's information is most interesting not for any great shock value but for its further testimony to the reductive persona Gore has accepted all his political life, which is to say all his life. To think of Gore as a young student, soldier and journalist lighting up the bong every time he got a chance is to think of him as a real person, doing what people of his age and station did in that place and time, instead of as the pinched, improbable youthful experimenter he asks us to believe in, who quickly put away all the childish things that were beneath someone of his ambition and probity. Which is sadder: to think of him as so ambitious that he automatically denies and compresses this mildly wicked chapter of his youth or to think of his never having lived such chapters at all?

Turque renders Gore's life as a series of intermittent, half-hearted efforts to break the baleful chains of his duty and the vice president as "a man who at critical moments had proclaimed independence and then retreated from it." Hence Gore goes to Harvard and decides to study English instead of government, but after a year or two reverts to the family business. He comes to loathe the Vietnam War, but enlists anyway out of concern for his father's waning political career. Gore comes home from Vietnam and again swears off politics, taking up journalism instead, but five years later runs for Congress after all. Following his humiliating defeat in the 1988 presidential primaries, Gore writes a passionate environmental manifesto, in which he describes the self-loathing he sometimes feels over his own tendency to "put a finger to the political winds and proceed cautiously," but then when he is invited to join Bill Clinton's ticket in 1992, he softens and minimizes what his book presented as the most urgent counsels of his conscience. His life and career, Turque writes, have been "punctuated by separations never quite achieved, and by bold strokes never quite converted into personal or political liberation." It is a theme mirrored in his political behavior, which holds examples of both genuine principle and the most blatant expediency.

Turque's thesis makes a lot of sense. Watching the radical difference between the informal Gore who talks to reporters off the record and the formal campaigner so widely derided for his stiffness, one has the impression that the gulf between these two men is a willed accomplishment on Gore's behalf -- a way of holding apart from politics some essential self that he still hopes to try to salvage from the Great Inevitability that has always ruled his life.

"Inventing Al Gore" does a good job of covering Gore's public life along the way. Its chapters on Gore's years in Congress are models of fairness and thoroughness, noting Gore's caution -- his "facility for assailing the assailable and fixing the fixable" -- but also his genuine farsightedness in the areas that engaged him intellectually.

Turque also turns in the best account to date of the entire Gore family's tortured relationship with tobacco, which was dragged into relevance by the 1996 Democratic convention speech in which Gore essentially accused the cigarette industry of killing his beloved older sister. Cynics immediately pointed out that the family -- including, to a small degree, the vice president -- had farmed tobacco for a good seven years after Nancy Gore Hunger's death in 1984, and that Gore had continued to accept political contributions from the industry. This was not a case of hypocrisy, Gore protested, but of evolution: "People don't change immediately," he said in a 1997 interview. "Human beings are more complex than that."

Turque is inclined to buy the more cynical view. But the simple facts he lays out somewhat support Gore's point of view, for they show a family wracked by denial and dysfunction. Immediately after Nancy's death, Turque writes, the family went around assuring friends that although she died of lung cancer, it wasn't the form of cancer associated with smoking, and might have originated from a tumor elsewhere in her body. (It was adenocarcinoma, which is indeed a rarer form of cancer, but which is often associated with smoking; and Turque's reporting says flatly that her doctors had no doubts about her cancer's point of origin.) It's an astonishing and quite humanizing scene, when you consider that Nancy had been so addicted to tobacco that she kept smoking after her doctors removed one of her lungs. And it seems relevant that the family had plenty of experience at prettying up Nancy's troubles, for she was also an alcoholic.

In any case, Turque gives Gore some credit for anti-tobacco stands he took in Congress, even as he was accepting industry contributions. And it's a credit to the author that he sets down all these layers in enough detail to let us form our own conclusions. Political journalism is, for the most part, a Manichaean universe, and I was struck at how rarely one encounters the subtlety and thoroughness that Turque brings to his treatment of Gore's tobacco history.

But Gore becomes more, not less, of a cipher as "Inventing Al Gore" approaches the present. The material on Gore's vice presidency is the weakest in the book, serving up the hearty soup of anecdote and clichi, delicately seasoned with anonymous-aide quotes, that is the hallmark of newsweekly White House coverage. This is a world in which a foreign policy mistake "signal[s] weakness and disarray"; in which a good man is one with "a willingness to think outside of the box," and the vice president is inevitably "the veep." The closer Turque comes to the present, the less he seems to trust his own thinking and reporting.

Thus he never quite makes up his mind about whether all of Gore's efforts at becoming his own man have led him anywhere. The vice presidency is always an awkward dance of submission, and serving in Clinton's White House involved some especially complicated steps. But was this just more of the same for Gore, the story of his whole life, or did the past eight years mask any change? Absurdly, the political press has covered the turnaround of Gore's campaign -- the move from K Street to Nashville, the candidate's newfound Alpha aggressiveness and independence -- as a major drama of personal growth, as opposed to the discrete test of executive leadership and political skill that it actually was. But people do change, over time, and it's one of Gore's more appealing qualities that he has tried so hard through the years to understand the forces that have shaped him. (He's tried it in a characteristically grandiose way, of course, with that annoying tendency to classify and proselytize and generally take himself with utter seriousness; but it still counts.)

Marjorie Williams writes a weekly opinion column for The Washington Post, and is a Contributing Writor for Talk magazine. Her political profiles have appeared in the Post and in Vanity Fair.