Looking for the non-Disney version of the Outer Hebrides, I found it's not such a small world after all. 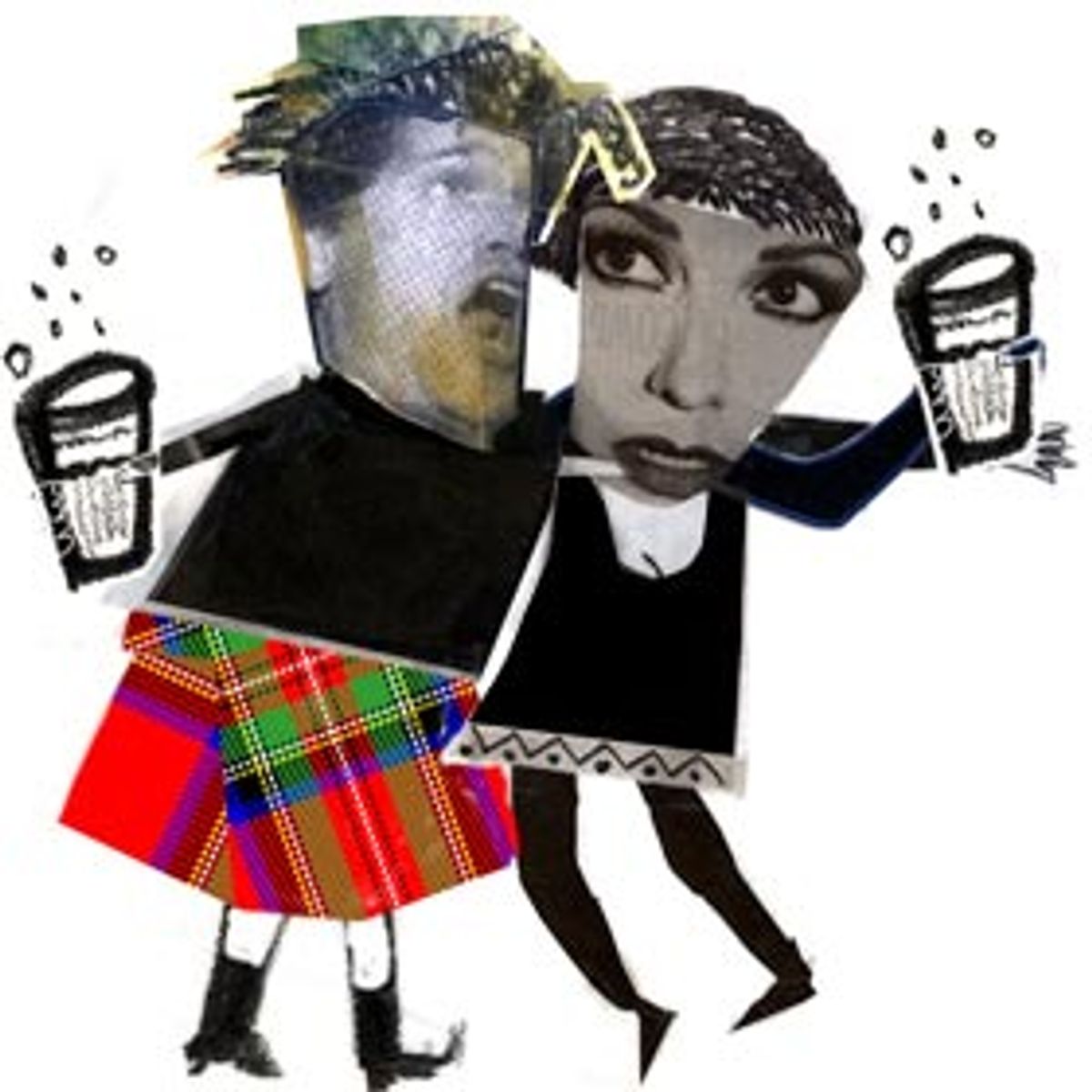 We walked into a myth. This could not be Scotland. Irvine Welsh's debunking bestseller "Trainspotting" was hitting Hollywood, I had seen Glasgow's techno-scene firsthand and the only visible signs of tartan were in the tourist shops that crowded Edinburgh's Royal Mile. No, this came from the pages of my childhood oversized atlas or the ancient nostalgia of a Burns poem. This was a Disneyfied clichi, not Scotland for real.

Several days after landing in Glasgow, I boarded a northbound bus with my small student group. Although I was in the midst of my pre-graduate days/daze, I stridently refused to be swept into a rose-hued view of Scotland's much-mythicized past. I watched the post-industrial tenements fade into the Highland's lochs, mist and mountains with skepticism. OK, so maybe a small part of me succumbed to the grandeur -- the terrain looking like the backdrop to "MacBeth" or sea monsters, huge and foreboding -- but I was still attentive to the corner shops with their Budweiser signs. I heard the American pop hits blaring from cars with Scottish plates and noticed those bucolic homes crowned with TV satellites.

The further north we climbed, the more severe the land became. Land spewed forth: rocks, edges and distant slanting storms, a chorus of grays and high greens, the trumpeting patches of blue. By the time we reached the outer shores, the towns grew less frequent, the familiar petrol stations and McDonald's more random. We crossed Northern waters, hushed by cumbrous skies, and traversed quiet islands tucked close to the mainland. Boarded on a massive rusted ferry, I peered into the gray, unsuccessfully searching for my final destination, the Outer Hebrides. The sun, already elusive for the majority of our journey, had since given up and the muted hues took on darker tones. It was probably no later than 5 p.m., but the weight of the day made it feel later, and I could no longer make anything out. The wind moved west and my mind lay empty, dumbed by so much space.

It was in this stupor that I got off the ferry in Tarbert on the Isle of Harris. Wet, tired and hunched over with an overstuffed backpack, I slugged my way from the small town to our hotel. Even in the dark, you could tell the hotel was not for local consumption. Like a pompous relative, it held itself straight in the sideward rain. Its freshly painted walls stood out from the surrounding rocks rather than settling amongst them. This made sense to me. Even though this dreary weather did not make the island look particularly appealing, knowing tourism's never-whetted appetite for the remote and romantic, this hotel fit right in with my world view.

I collapsed into a Victorian room with my traveling partner, Maggie. She was also an American, though she would shudder to be called that. Maggie had already traveled extensively and developed considerable scorn for the American abroad. A wee girl with a mass of dark red hair, an Irish complexion and a feline presence, she hid her nationality well. I was significantly less subtle. Larger framed and with a louder manner, I fit more the mold. Despite these differences, we bonded over our disdain for the rest of our group and our determination to experience the non-postcard Scotland.

This common focus must have been strong because I cannot remember any other motivation for us to leave our plush room on that otherwise unaccommodating evening. The night whipped cold and the rain blew horizontal. The hotel was probably less removed than it appeared, but it felt like an impressive trek into that town. We fought towards the only lights we could see and eventually found ourselves on Tarbert's main drag: a couple of crumbled buildings and a gray, two-story hotel.

We spotted locals stumbling from a pub below the hotel and gravitated to it. In what I would learn was a tough trick to pull off, we tucked into the small pub almost unnoticed. The scene I happened upon was one I hadn't known to be possible. Mouths opened in large laughs, flutes and accordions played in accompaniment. Thick with smoke, music and bodies, the pub was in full festivities. Lager spilled over the edges of toasting pints and rough hands negotiated cigarettes, drams and back slaps. And yes, almost everyone wore a kilt.

Maggie and I stayed close to the wall, not quite sure what we'd sauntered into. Unlike any other island pub I'd ever entered, we were not glared at or attacked like a foreign antibody. Furthermore, when we were acknowledged, we were quickly folded into the celebrations. Enthusiastic introductions were exchanged and pints were passed to our empty hands. We learned that the impetus for the evening was the wedding of the proprietor's daughter, now a former Macleod, and this was the after-party. The fact that half the town of Tarbert was related to the Macleods explained the size of the party and preponderance of identical kilts.

Maggie's minimal stature was soon lost behind round bellies and tall stories, each of us sucked into eager men's tales of glories past and problems present. An older man with a red face chinked my glass and proceeded to tell me about his ancestors as if I had asked the question.

"Do ya knaw tha story of Robert tha Bruce?"

"Tha nobles' of all; he fought agains' tha bloody English!"

A young man named Roger with an Elvis coif and two days' stubble leaned an elbow on the bar and shared a seemingly often-told story about his travel outside the islands. The men told me jokes I barely got and the others laughed as if hearing it for the first time. I took my cues and smiled along, buzzed and stunned from sensory overload. My glass never made it a quarter empty before I was given another, and single malts were given with slurred instructions. In Napa I was not.

I eventually fought my way back to Maggie, who was talking with the few women in the pub. They had ditched any signs of wedding wear, and their mascara was blurred below their eyes. Cigarettes hung lazily in their hands and their words seeped out like smoke. I'm not sure if they considered us a threat or if they were simply wiped out from working the wedding while the men celebrated it, but they took our arrival with considerably less enthusiasm. Once we had initiated introductions and adopted submissive body language, they returned the gesture by offering cigarette drags and thickly accented grumbles regarding the opposite sex.

The night continued at a slurred pace and Maggie and I followed suit. Like balls in a slow-motion pinball machine, we bounced where others willed us. We eventually settled among the two brothers of the bride, Donny and Angus Macleod. Both sported the fair Scottish complexion and had beaming eyes with grins to match. Donny was younger with a leaner build, Angus looked more weathered. His temples were prematurely graying, his laugh lines were well marked and Maggie and I both struggled to suppress our attraction.

The brothers took our company with neither the energy of the older men nor the skepticism of the women. Instead they treated us as if our presence was expected. They told us about themselves: the house Angus was building from scratch, the two brothers' plans to hitchhike the globe in kilts to search out the world's Macleods' descendents. ("Ya see, cars stop fa blokes in kilts.")

We shared music and movies, and when they couldn't bother with making trivial conversation, they took slow drags or chatted among themselves in Gaelic. Pronounced like a Brooklynite saying "garlic," Scottish Gaelic is the almost-extinct Scot version of the more-familiar Irish language. I had only read about it in history books, but it was Donny's and Angus's mother tongue.

This was almost too much for a decidedly non-naive girl like myself. As I peered down at the ashen knees that hung below the collection of kilts, tuning in the salubrious guitar and whole-hearted singing, my head spun. America may be everywhere, but everywhere was not America. Contrary to my constantly upgrading urban environs back home, this place did have a past, and that past was not just graffiti in a school textbook. I don't pretend that the men of Tarbert always walked around in kilts, but they did know why their tartan had the colors it did, and where those colors came from.
(All my clothing claimed to be made in a country I could not place on a map.)

When the Tarberters sang songs, they knew the words that their ancestors two generations back did. (Most of my friends could not even sing a full Beatles refrain.) I was in the here-and-now of a real Scottish event where the Gaelic, kilts, scotch and songs had concrete significance. I had found the real Scotland, and it just happened to look a lot like the postcard.

If Scotland felt incredibly singular, this only intensified with what happened next. Abruptly, the crowd thinned, the music halted and the lights went off. Donny and Angus quickly ushered us into a back room where the newlyweds' immediate family huddled and whispered. Between my altered body chemistry and my foreign ignorance, I was slow to realize what every other partygoer knew. The clock had struck midnight, the day had crossed from Saturday night to Sunday morning. We were in the Outer Hebrides, a place where people were scorned for doing laundry on Sunday, let alone partaking in God's less-sanctioned pastimes. Angus's remark that the last two Sundays "have not been too Hebridean" suddenly made sense.

Our presence -- as witnesses, I suppose -- pointed up the party's transgression. It took us 10 minutes before Maggie and I realized this, and by then we were the topic of the terse whispers between the women and men. Once this became clear, we apologized profusely, acknowledged the generosity we'd been afforded and rushed out into the early morn.

Rain pelting our backs and the wind pushing us towards the brightness of our hotel, Maggie and I walked easily. Like kids after a Disney ride, we recounted moments and stories and before we knew it, we were back at the hotel. Peering out our room's window, I considered all the surprises the evening had brought; perhaps, I thought, it is not such a small world after all.