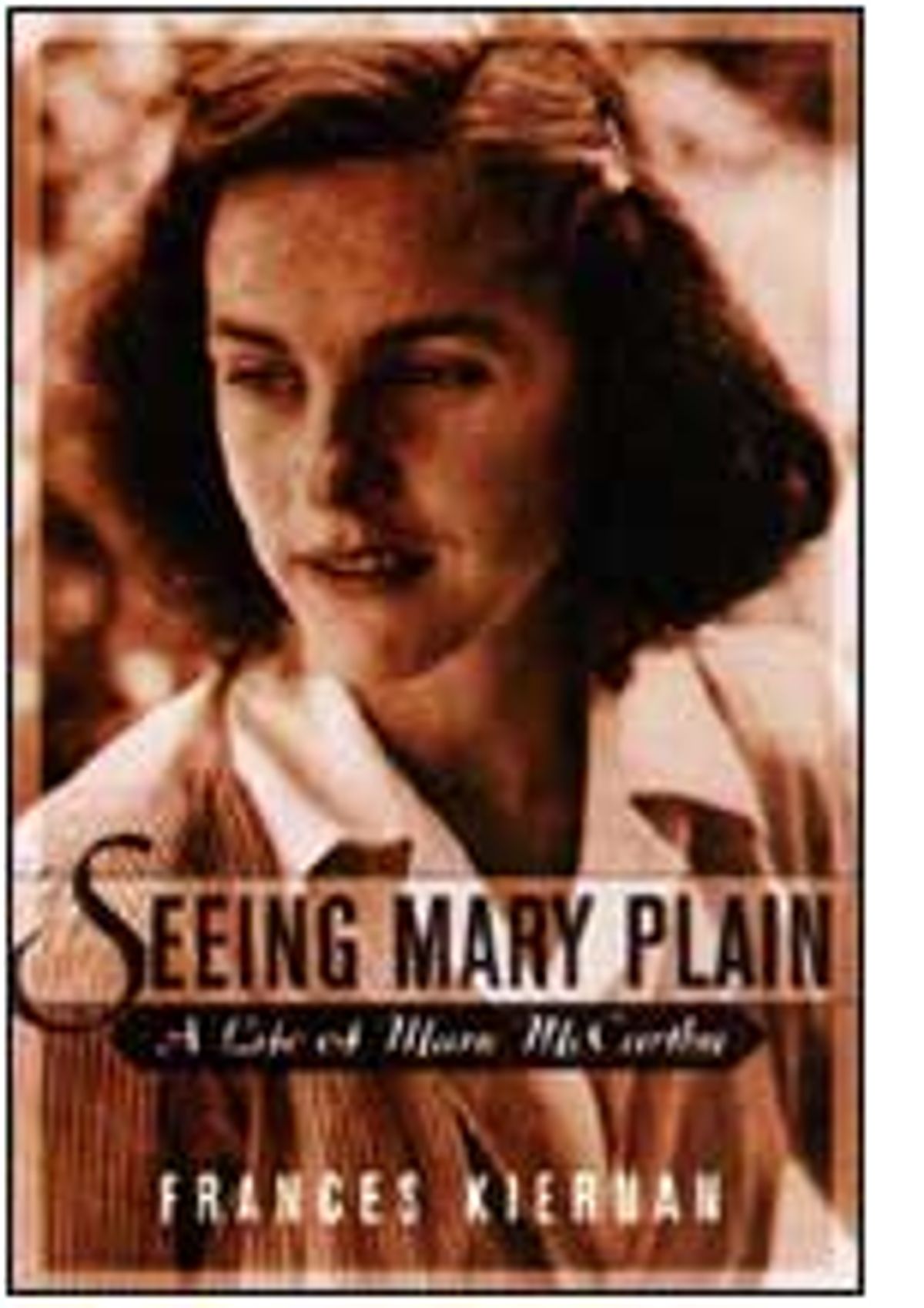 The world of the novel, Mary McCarthy wrote, is the world according to the village gossip. Try it with your own favorites:

"Well, I always thought old Karamazov had it coming."

"Hey, is the Caulfields' second kid giving them trouble again?"

"Sweetie, you've got to get a look at the gorgeous man who rented Charlotte Haze's spare bedroom."


"Did you hear that Dottie got a diaphragm? At the Margaret Sanger Clinic? And she used her own name."

You may not understand the last example, because Mary McCarthy is not much read these days; it's from her 1963 novel, "The Group." Wickedly compounded of its characters' youthful cluelessness and haute-bourgeois snobbery and its author's touching, fragile faith in human progress, "The Group" speaks its gossip in the composite voice of Vassar 1933, channeled through its most famous graduate.

So it makes perfect sense that Frances Kiernan's big new biography of McCarthy is an upscale gabfest, a chorale of gossip culled from its subject's intimates and acquaintances, friends and enemies. Rivaling "Infinite Jest" for heft, "Seeing Mary Plain" ends with a 16-page alphabetical cast of characters, a "Who's Who" of midcentury American letters that includes the Vassar classmates who were McCarthy's first eager readers. "I learned from her short stories that devilled ham was fatal to a proper orgasm and that lettuce was a powerful aphrodisiac," says one Lucille Fletcher Wallop. "I had never heard of orgasms or aphrodisiacs, but I lapped up her descriptions as did the rest of the class, who often lined up in a long queue waiting for the folder."

Over a 50-year career, McCarthy wrote about politics, literature, theater, art. She defended Leon Trotsky against the literary Stalinists of the '30s, organized left-wing anti-Communist writers during the Cold War, covered Vietnam and Watergate. And she created a mordant fiction of ideas and their seductions, a stylish erotics of class, power and the intellect.

Beautiful, witty and infinitely contentious, she was called "the dark lady of American letters," as though American letters needed to contain a woman so dangerous by means of a nervous epithet.

Still, it's maddening quotations like these that give this biography its shape and flavor. Knitted together by Kiernan's thoughtful and effortless-seeming summaries, it's a surprisingly quick, enjoyable and enlightening read, suggesting -- as more heavy-handed biographies do not -- the dailiness of a life in process. "From start to finish," Kiernan says, "Mary McCarthy wrote sentences that were clear and lucid and altogether beguiling." "Seeing Mary Plain" maintains a lightness, balance and buoyancy worthy of its subject.

"Anecdotes tend to cut their subjects down to size," Kiernan points out, and here, too, the biography's anecdotal form seems particularly apposite for a woman who wielded such a mean and gleeful scalpel. She used it most famously in her 1979 assessment of Lillian Hellman on late-night TV: "Every word she writes," McCarthy told host Dick Cavett, "is a lie, including 'and' and 'the.'"

But what's more interesting is McCarthy's way of cutting herself down to size. In the first and best of her memoirs, "Memories of a Catholic Girlhood" (1957), she inserts several pages of italicized commentary between the essays. "There are several dubious points in this memoir," she tells us, as though (as Jean Strouse points out) she were simultaneously defendant and prosecuting attorney in some court of her own convening.

"When you have committed an action that you cannot bear to think about," she wrote in "How I Grew" (1987), "make yourself relive it, confront it repeatedly over and over." Her own unbearable -- often sexual -- actions revealed a need for attention and admiration, as well as a guilty desperation engendered, perhaps, by winning too cheaply. "The men she had known ... had been, when you faced it, too easily pleased: her success had been gratifying but hollow. It was not difficult, after all, to be the prettiest girl at the party for the sharecroppers."

All this often works brilliantly on the page -- most particularly, I think, in her first novel, "The Company She Keeps" (1942), from which that passage is taken. (Start with it rather than "The Group" if you want to read McCarthy.) But though every "and" and "the" rings with intelligence and authenticity, it's ultimately still (as writing always is) self-justification. Nobody ever really gets to be both judge and defendant at her own trial.

The jury of scolds and gossips that Kiernan has convened is a loving corrective -- because they do not finally cut McCarthy down to size at all but, rather, allow her to expand into a space that's roomier than any one writer's beguiling sentences or carefully qualified memoirs could allow. "Preserve me in disunity," the heroine of "The Company She Keeps" prays on the last page of the novel. And so her creator is preserved in this fine biography.