Good girls don't get them; bad girls do and pay a price. 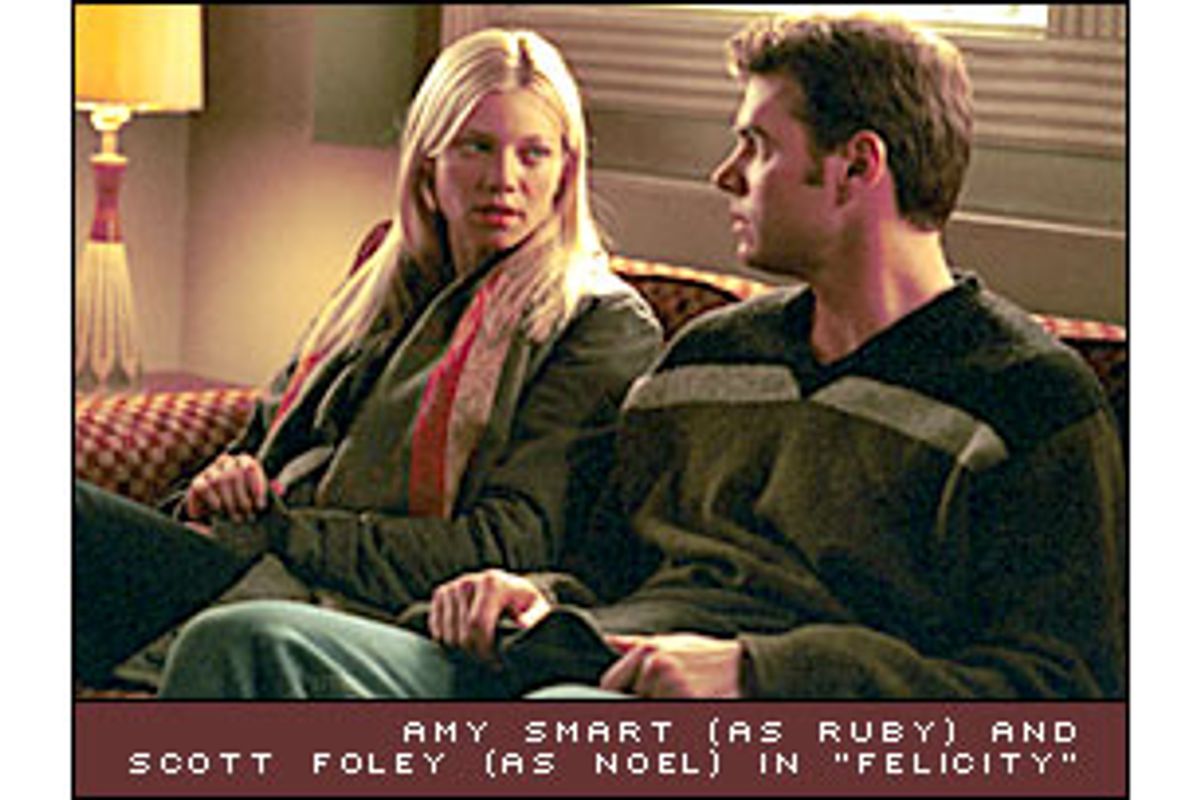 I know that TV is TV; I don't expect it to reflect reality. My husband and I have a running joke as we watch whatever junk we watch: Whenever one of us questions the logic or plausibility of a particular plot point, the other replies with the corrective "TV land." Enough said. We know how it works in TV land.

But there is one thing that always gets to me in TV land: abortion. I'm sure you've noticed the clichi: Any "good" character who has an unwanted pregnancy on network television either has a miscarriage or gets some strange, mysterious disease that rids her of the inconvenient fetus. If only reproduction worked that way in real life! The rare good character who wants to be pregnant always has the baby. (Remember Andrea on "90210," way back when?) I can't help myself: I yearn for an abortion plot line.

Which explains my naive excitement when a plot line about abortion developed on "Felicity." Now, I'm well aware that the pretty young college kids who populate the TV environment of Felicity's urban university in no way reflect the reality of your average college undergraduate, let alone the urban, working-class students whom I teach. Again, it's just my overwhelming desire for a decent abortion plot line.

It did look hopeful for a while. Noel (a nice guy) got Ruby (his nice girlfriend, although one of the show's minor characters -- a sign of trouble) pregnant. The episode began with Ruby and Noel agonizing over a pregnancy test, which they couldn't quite wrap their minds around getting. The episode as a whole reflected the excruciating pain of a young woman watching her life grind to a halt as she faces the fact that she cannot necessarily or perfectly control her body unless she abstains from intercourse -- an overwhelming agony that nearly every woman who has been sexually active in a heterosexual relationship has experienced and that politicians seem utterly unwilling to acknowledge.

At the same time that Ruby went through the mental anguish of her late menstrual period, Felicity had just discovered that she was the product of an untimely college pregnancy. Can you really blame me for feeling hopeful? Since the previous episode had clearly linked the fact that Felicity's mother had had to drop out of school and reroute her entire life because of her unplanned pregnancy, all of which had led to midlife angst, divorce and upheaval, I felt certain that the writers would not force the same fate on young Ruby.

Indeed, the episode next followed Ruby and Noel to the health clinic, where a kind young doctor reassured them that an abortion wouldn't hurt much more than menstrual cramps and that it was three times safer than having a baby. And did I mention that the word "abortion" -- not just a euphemism -- was actually spoken?

As we were watching the show, however, my husband pointed out that no one was touching Ruby. As she confided in Felicity, for example, there was no hug, no physical comfort at all. Even Noel maintained his physical distance from Ruby, whose pain was amplified by the fact that no one seemed willing to comfort her. Did she not deserve hugs? Was she somehow tainted by her unplanned pregnancy?

The turning point came near the episode's climax, when Ruby and Noel, after agonizing over their decision, head off to the clinic for an abortion. On their way, they hold hands, but their grasp is broken to make way for a woman carrying a baby -- at whom Ruby glances wistfully. Not the symbol I was hoping for here.

Ruby enters the procedure room alone, leaving a pained Noel in the waiting room. A moment later, she runs out, crying that she can't do it. Then, in the very next scene, Ruby talks about how she has been so unhappy in her life and now she has found the meaning to everything: She was meant to have a baby and be a mother; it will solve all her problems. It's not the motherhood I know, but that's another story.

I wasn't pleased. But I was even more upset to see the next episode. Ruby and Noel are at the doctor's once again. This time the sonogram reveals the age of the fetus, and Noel exclaims: "That can't be right." In other words, it's not his baby! There was a reason no one was touching Ruby; it's time for her to be demonized.

After all, only bad characters really have this problem. Ruby got pregnant, it turns out, not just because she was having sex but because she was cheating on Noel, her boyfriend. Remember: An unwanted pregnancy never happens to a good character in TV land. A nice girl, like Felicity, can be sexually active without ever having to fear an unwanted pregnancy. Maybe that's why when Ruby asks Felicity whether "it" had ever happened to her, the writers could easily brush it off with a simple "No." Of course it could never happen to Felicity -- she's the title character. She can't be written out of the show the way Ruby can be. (And, of course, Felicity could never have an abortion.)

Having revealed the untoward origins of Ruby's pregnancy, the episode focuses on the question of Noel's responsibility toward Ruby as she fades more and more into the background. Noel declares triumphantly that he feels free, as if a great weight has been lifted, now that the pressure of his impending fatherhood has been removed. He can focus on whether he wants to be a good guy, but the decision of whether to stay with and support Ruby has no downside for him. He is now fully justified in dumping her.

How much easier, I suppose, for the show to focus on Noel's beneficence toward the thoroughly denigrated Ruby than to deal with the messier questions that emanate from the fact that sex can result in an unplanned pregnancy, with the idea that an unwanted pregnancy could occur without anyone's being a cheating slut, without anyone's being at fault.

I know that the young women who watch "Felicity" don't buy all this stuff. I know it's just TV land. But abortion is my weak spot. I can't help thinking how nice, how important even, it would be for the young women in the audience to see -- for once -- that pregnancy is a consequence of sex, not of character.