"Ghost Dog: The Way of the Samurai" 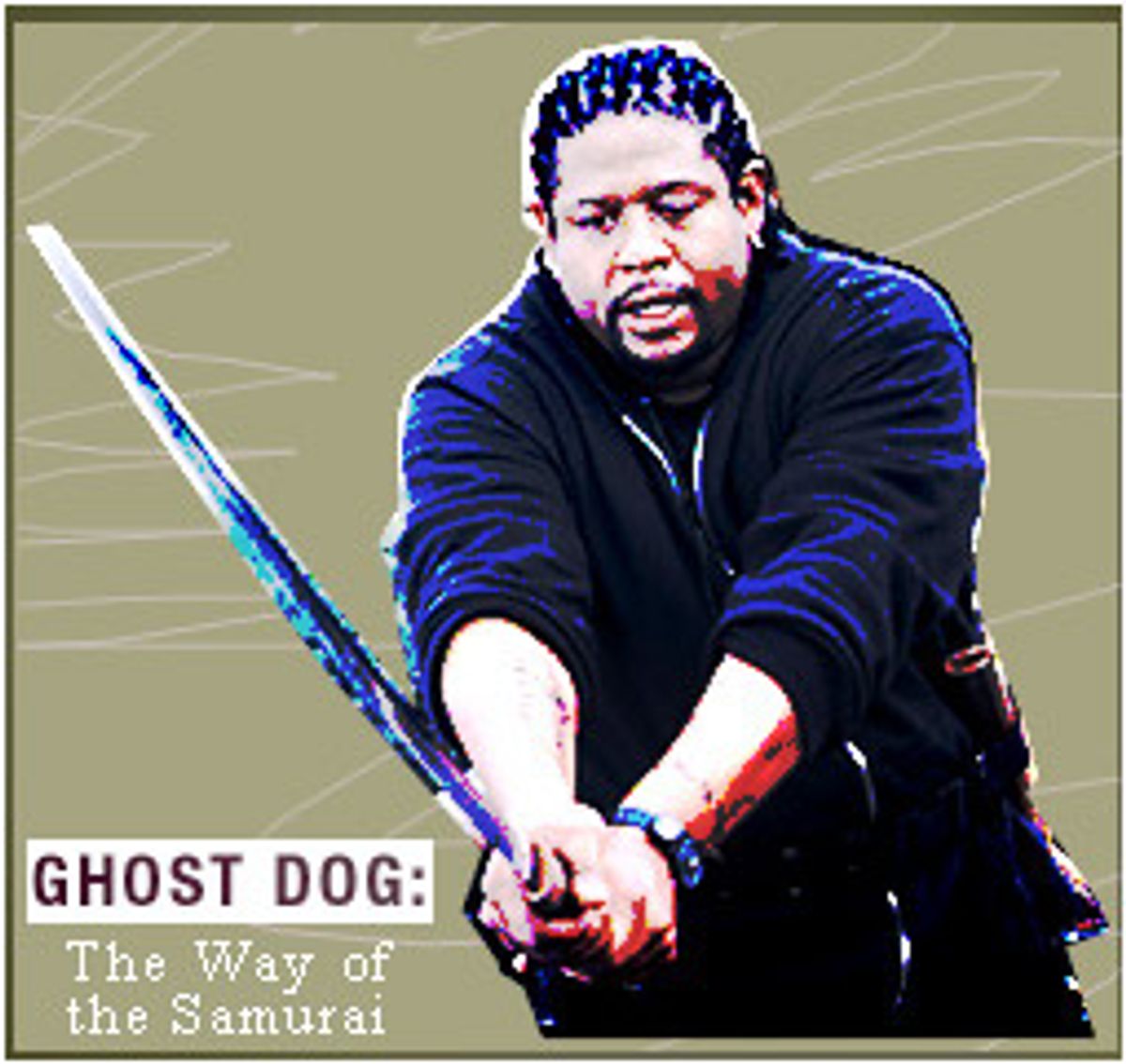 It's always a pleasure to watch an actor who knows how to use his body beautifully, who moves with grace and also has the ability to telegraph the subtlest of emotions by changing the set of his shoulders or the meter of his gait. In Jim Jarmusch's uneven but compelling "Ghost Dog: The Way of the Samurai," Forest Whitaker plays a reclusive and mysterious inner-city hit man who lives and breathes by the code of ancient Japanese warriors, and he moves with so much conviction that he barely needs to speak.

Alone on the rooftop he calls home, silhouetted against a smoky sky and the ragged chimneys and TV antennas of neighboring buildings, Ghost Dog draws his sword and slices through the air, moving as breezily as Jackie Gleason doing a soft-shoe. He writes his poetry with a sword, much as the character Johnny Depp played in Jarmusch's last feature, "Dead Man," comes to write his with a gun. He's got the heart of a warrior, but he moves on little cat feet.

Every minute he's on screen, Whitaker makes "Ghost Dog" worth watching; he helps take up the slack that so often creeps into Jarmusch's storytelling. Jarmusch is an immensely talented and hugely frustrating director, and "Ghost Dog," which he both wrote and directed, has his fingerprints all over it. As a piece of filmmaking, it's deliberate and labored in places, breathily fleet and poetic -- and funny -- in others. It's not as starkly gorgeous as "Dead Man," nor does it move at as dreamy (some might use the word "interminable") a pace. You could almost call it an action picture, albeit a metaphysical one.

The narrative of "Ghost Dog" sometimes buckles under the strain of Jarmusch's belabored ideas. His muddled message seems to hinge on the idea that contemporary codes of honor, particularly those in black urban culture, can mesh with ancient ones, and he hammers on the idea repeatedly but also obliquely, never quite nailing it. But if you can strip away Jarmusch's pretensions (which seems to be a prerequisite for watching any Jarmusch movie), "Ghost Dog" works well enough as a simple urban fable, one that's often deeply hypnotic as well as entertaining.

Ghost Dog is not only a hit man but a bird lover -- possibly not in that order -- who lives alone on his rooftop with a coop full of carrier pigeons and a stash of firearms that he uses to carry out his missions. He's fashioned himself into a modern-day Samurai, drawing his inspiration from the "Hagakure," a text with tenets like "Meditation on inevitable death should be performed daily." He's employed by Louie (John Tormey), a second-tier mobster to whom he's indebted (Louie saved him from a brutal, life-threatening beating years earlier), but not even Louie knows where he lives. The two communicate by carrier pigeon; Ghost Dog insists on being paid not by the job, but by the year, always on the first day of autumn.

When complications arise after one of Ghost Dog's hits, Louie finds himself in hot water with mob higher-ups, including top guy Vargo (Henry Silva, whose deadpan demeanor is funny at first and later surprisingly touching) and Sonny Valerio (Cliff Gorman). He tries to straighten out the mess, but it ends up spiraling out of his, and Ghost Dog's, control.

Between his physical gifts and his easy expressiveness, Whitaker is the perfect actor to reveal Ghost Dog's peaceful-as-a-fishpond soul. That droopy left eye gives him a sleepy, contemplative look, as if he'd worked out the secrets of the universe in his dreams only to spend his waking hours haunted by them. He's marvelous in his scenes with Pearline (the charming Camille Winbush), a little girl who strikes up a conversation with him in the park, and who uses a lunchbox to tote a selection of paperbacks including "The Wind in the Willows," "The Souls of Black Folk" and a lurid paperback called "Night Nurse," which she admits she hasn't read but likes for its saucy cover. The solitary little girl who likes to read and the Samurai loner who freely confesses to loving "The Wind in the Willows" strike an easy rapport, and their moments together are some of the loveliest in the movie.

"Ghost Dog" has an almost dreamy, rather than gritty, urban look, courtesy of cinematographer Robby M|ller. And Jay Rabinowitz has edited it beautifully against RZA's resonant hip-hop soundtrack. Even so, it's best to be prepared for "Ghost Dog's" uneven rhythms. The banter between the mobsters provides some of the liveliest moments -- Gorman's Valerio declares that his favorite rapper is Public Enemy's Flavor Flav -- and the picture's muted doses of action and violence are often more lyrical than they are jarring.

And in some places, "Ghost Dog" is just plain dull; there were numerous points when I wished Jarmusch would just step on it and wrap it all up already. But in between the sluggish spots, there's something mysteriously alluring about "Ghost Dog." Its heart beats most persistently in Whitaker, with his Buddha body and his easy, rolling walk. He may be a big guy, but everything about him seems as spare as haiku.