The secret behind "Boys Don't Cry"

Director Kimberly Peirce says it's fun -- until the bitter end. 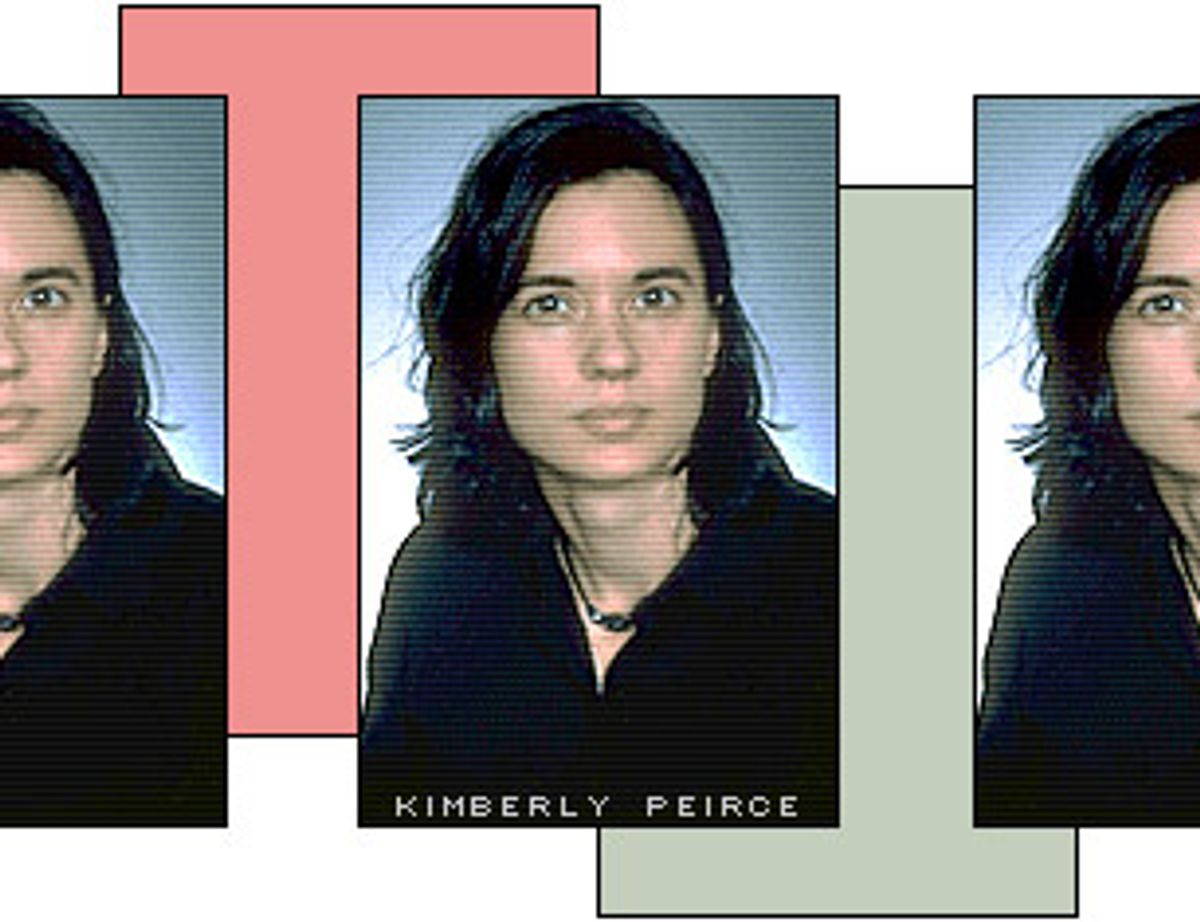 Few small-scale films have the staying
power of "Boys Don't Cry," a
swift, compelling rendering of the Teena
Brandon murder case. The movie scored a
critical knockout when it premiered
last fall, kept accumulating admirers
all winter and now has garnered Academy
Award nominations for Hilary Swank as
Teena, the Nebraska girl who passed as a
boy (and was killed for it in 1993), and
Chlok Sevigny as Lana, her lover. Its
multiple end-of-year awards and Oscar
push for Swank as best actress and
Sevigny as best supporting actress
fueled a revival of interest in the
movie and the real-life case. As a
result, this low-budget independent film
has stayed in the top 25 at the box
office and grossed roughly $5 million.

The film's audience might broaden even
further if potential viewers realized
that it's not just about a brutal murder
spurred by sexual rage, but also about a
leap of imagination, albeit one that
lands the hero/heroine in an abyss. When
I interviewed Kimberly Peirce, who
co-wrote the film as well as directed
it, before the film's limited rollout
in October '99, what impressed me was
her fix on the "fun" of the Teena
Brandon/Brandon Teena character.

She admired Teena's audacity in carrying
out her wish to be a boy and Brandon's ensuing naughty boyhood.
(Peirce referred to the character mostly
as "he.") During our conversation, the
director cited not only true-crime
classics like "The Executioner's Song"
as key inspirations, but also Disney's
"Pinocchio." Afterward, I felt that with
her obvious interest in cross-dressing
and her not-so-obvious interest in
poetic fable, she should consider
directing Swank as "Peter Pan."

In an era when first-time feature
directors often turn their debut films
into little more than celluloid
portfolios (see what I can do?), "Boys
Don't Cry" is the rare bird that took
flight from a fledgling auteur's
fascination with its subject. Six years
ago, Peirce had been working at Columbia
University Film School on a screenplay
about a female Civil War spy who
masqueraded as a man. Peirce gave it up
because the spy posed as a male for
survival and she wanted to explore a
woman who'd masquerade as a man in order
to work out a new identity. That's when,
Peirce says, "I found Brandon, or
Brandon found me." She picked up an
issue of the Village Voice and there was
the tale of this person "from a trailer
park, with limited economic means," who
makes an extraordinary effort to
"reconstruct herself as a man, and then
runs with it."

Part of what Peirce found seductive
about Brandon was that he always picked
"simple solutions to complicated
problems like reversing his name from
Teena Brandon to Brandon Teena, as if no
one would notice. Or he'd charge an
engagement ring on his girlfriend's
credit card, and when she'd question him
about it, he'd say, 'I did it for you.'
I understand girls who dress like boys,
but I also know inept criminals and feel
I understand them. And Brandon was an
inept criminal: He makes you think of
Woody Allen in 'Take the Money and
Run.'"

She also connected to Brandon as a
spinner of fantasy: "As a filmmaker,
you're constantly trying to reconfigure
your fantasy in order to seduce people
into your fantasy, and that's what
Brandon would do. He went back to the
drawing board until he found something
that worked."

To Peirce, the most amazing moment was
Brandon looking in a bedroom mirror,
putting himself together as a man. The
director is a believer in "trying on
different identities and letting them
shatter, and discovering something new
-- the deeper, truer self -- in the wake
of the unknown." Brandon's life was a
series of crises, solutions and revised
resolutions, and Brandon himself,
according to Peirce, had as much to do
with the destruction of his male
identity as with its original creation.
"He chose the life that ended the way it
ended. He didn't want to be gay, he
wanted to be straight, because straight
was what was normal in his mind. The
problem was, he desired women. So once
again, a simple solution to a
complicated problem: He could seem to be
a boy."

When he lived in Lincoln he even
stayed in a trailer park, close to his
family; when he ran off to the
hardscrabble hamlet of Falls City, he
tried to reproduce family dynamics. "He
wanted the affirmation of other people,
and he wanted family. He was so happy to
feel accepted and loved as a man that he
let people into his confidence who had
the power to destroy him."

Peirce says the drama's small-town
contours helped pull her into it. She
was born in Harrisburg, Penn., lived
there for four years and considers that
period her time of "primal memories."
Although she rambled on to New York,
Miami, Puerto Rico and Chicago, Peirce
always has been drawn to small towns:
"Even now I live in the East Village, a
small town within a big city." She went
to the University of Chicago in two
stints. When she ran out of money, she
moved to Japan to teach English before
returning to get her degree in English
and Japanese literature. Then she signed
up for Columbia's film school. That's
where she met her "Boys Don't Cry"
co-writer, Andy Bienen, who worked with
her for a year and a half on the final
drafts and made sure they didn't
"mythologize" Brandon -- that they kept
him human.

Before that collaboration began, it was
up to Peirce to read every account of
Brandon's story and do firsthand
research. She was guided by the way
Norman Mailer had shaped "The
Executioner's Song." She admired how
Mailer's obsession with what happened
second by second in real life fed into
"the river of truth that runs through
that story." Peirce saw that the heart
of the book was the affair between Gary
Gilmore and Nicole Baker, and that part
of what made it live on the page was
that "Mailer tended to show the
intelligence of Gilmore," not merely the
brute criminality.

Says Peirce: "The negative can be so
powerful, especially on film. My goal
was always: Don't judge the characters
and don't diminish the characters --
make their motivations as rich and as
true to real-life people as possible.
The heart of the material came from my
interview with Lana."

Teena's girlfriend told Peirce that she
freaked out when she saw the director at
her door. "I thought you were Brandon,"
she said. Peirce says, "I don't look
anything like Brandon. But when
something like that happens you must
figure out what the need is. Lana wanted
to communicate with Brandon. She wanted
to tell her story but also to tell
Brandon's story."

Peirce could never pin
her down on when she knew that Brandon
was a girl: whether it was when she
first met him or at any point up to the
moment when John Lotter and Tom Nissen,
who would later kill Brandon, stripped
and raped him. But Peirce learned to
embrace the ambiguities. "It was a pure
love. Lana didn't think of Brandon as a
boy or a girl. She just loved
Brandon."

Brandon loved himself, too. "Brandon
loves being Brandon, and you love him
because of that," Peirce says. For long
stretches the film is oddly delightful
because of this. When I told Peirce that
I thought the center of Swank's
performance was a mercurial mix of
mischief and rue -- Swank's Brandon,
like a goodhearted, hell-raising child,
is quick to act on impulse and as quick
to apologize -- Peirce said, "I love
that you see that! That's where the
complicated fun and craziness comes
from. I saw Brandon as one of those
classic male heroes who makes mistakes,
from Clyde Barrow and Cool Hand Luke to
Pinocchio. Brandon is like Pinocchio
when he's getting in with the bad boys
and he's smoking cigars and the donkey
ears are sprouting up. We're all like that, I think; I connect to
Pinocchio in ways I don't even
understand."

Peirce aimed to keep us inside Brandon's
point of view by juggling two styles:
"One out of John Cassevetes and early
[Martin] Scorsese and neo-realism -- [Roberto]
Rossellini's 'Rome: Open City' and [Pier
Paolo] Pasolini's 'Accottone.'" Peirce
uses this style to explore the world of
arrested-adolescent arousal and
carousing that Brandon joins when he
enters the weirdly liquid friend and
kinship group of John, Tom, Lana and her
mom. When that world becomes too
restrictive for Brandon and Lana, Peirce
conjures up a second style with escapist
flourishes out of "the magical films of
Michael Powell and [Kenji] Mizoguchi's
'Ugetsu Monogatari' and 'The Wizard of
Oz' and all the Disney fantasies -- and
'Romeo and Juliet,' which I guess brings
things together."

Peirce hopes that the roughhouse
camaraderie of John and Tom takes in
audiences as totally as Brandon. She
wants us to see the sadistic fun in
risky activities like "bumper skiing,"
in which a "skier" balances on the back of a moving pickup truck while holding onto a line connected to the cab.
Peirce trusts that if her method works,
when the sadism begins to dominate,
"Everyone watching is in as much denial
as Brandon."

She didn't want the film to
play as an essay on "the culture of
violence," but as a tragedy of men who
are so crippled in their resources,
external and internal, that they, like
Brandon, must struggle to confirm their
manhood. Says Peirce: "When you contrast
these guys with Brandon, his existence
becomes a critique of what it means to
limit the imagination. Brandon turns out
to be better than them at being a guy;
it's a double blow when they discover
he's a girl."

The film's portrayal of tough slackers
brings to mind Tom Wolfe's observation
that the accouterments of the
counterculture never disappeared: They
drifted down to the working class and
lost their hippie-era meanings. "These
people didn't appropriate the emotions;
that's so interesting," says Peirce.
"It's true: You see that [murderer] John
Lotter has long hair and you think that
maybe he's OK with his femininity, when
he is completely not OK with it.
In a way, it's what I find so
fascinating about Lynyrd Skynyrd. The
music can be so lyrical and orchestral,
but the guys listening to it get off on
the rage."

Not even a troglodyte could get off on
the rage-filled murders at the climax of
"Boys Don't Cry" -- Peirce has filled
them with harrowing sorrow. But the
moment that shrivels the heart comes
earlier: Brandon, raped by his former
buddies, reports the crime to a sheriff
who pulls a classic blame-the-victim
number and asks Brandon why he's been
going around as a boy. When Brandon says
he's having a sexual identity crisis, we
experience it as a defeat.

"Brandon is
finally telling the truth and who is he
coming clean to? The sheriff. And he's
using language he appropriates from
someone else: 'A sexual identity crisis'
is a phrase someone must have told him.
But that phrase may be a clue to deeper
stuff. I guess he's like all of us --
he's looking for truth anywhere."