L.A. lines up for Krispy Kreme and other doughnut spots. 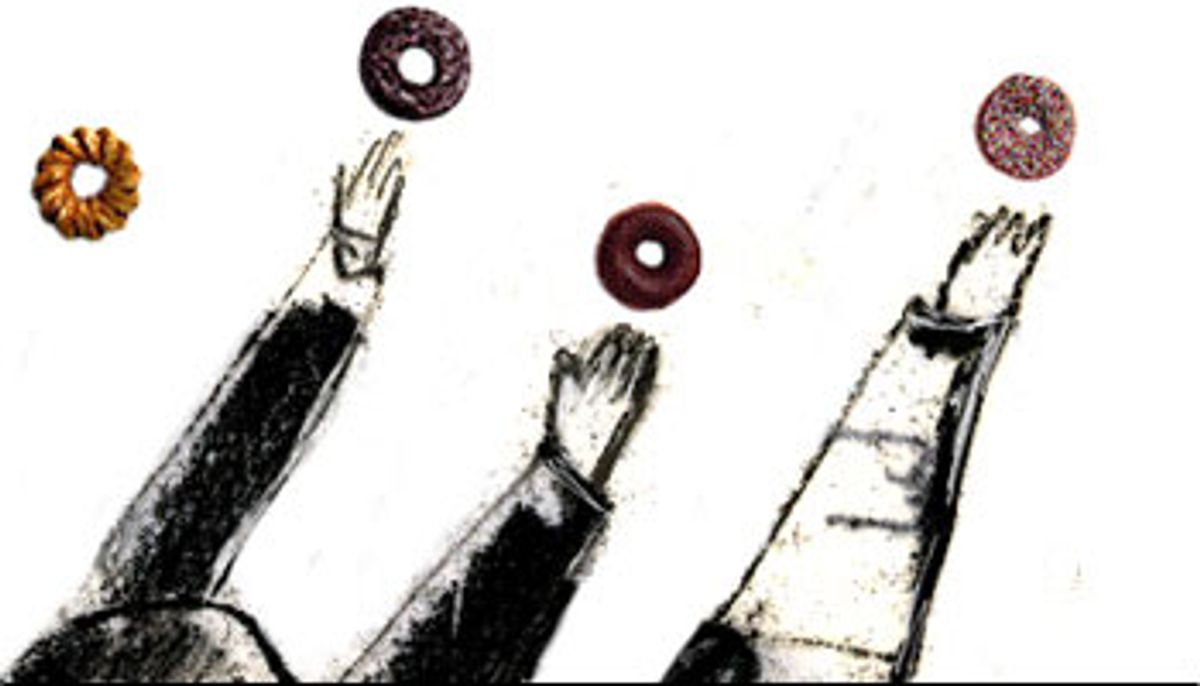 Sunday morning in Southern California. Blue skies, sunshine. It's a day for the beach, or maybe brunch at a chic little outdoor cafi that serves fruit smoothies. Or perhaps a nondescript, utterly banal commercial stretch of suburban Van Nuys, where Krispy Kreme Corp. is rolling out thousands of doughnuts every day. People cannot get there fast enough or often enough.

When I show up, two guards are directing traffic into the parking lot and around the drive-up window line of waiting cars that snakes back on itself. In the shop, as many as 75 people wait in line and watch little rings of dough drop into a vast vat of hot oil, get automatically flipped over and then pass under a Niagara Falls of opaque white glaze.

Somehow, the marketing guys at Krispy Kreme have turned this into a mystical process, a sacrament in the worship of doughnuts that has found a devoted following in L.A., America's doughnut capital.

Krispy Kreme is where the melting pot truly melts. Fidgety kids, women in crisp business suits with $100 haircuts, beer-bellied couch potatoes and 20-somethings dressed always in black and shades all take their place in line. All skin colors, languages and education levels have a place at Krispy Kreme.

People don't seem to mind the line; I imagine New Yorkers grumbling and yelling at the workers to hurry up already. There's plenty of doughnut chatter, comparing notes and trying to figure out just why these doughnuts are so good. One couple brags that they once waited three hours in line at the drive-up window. Hot Krispy Kremes "melt in your mouth, they're light. I'm not a heavy-duty sweets person, but you can eat a couple of these," says the woman. When her husband suggests she actually could put away a half-dozen, she refuses to give her name.

"I don't eat a lot of doughnuts, but you have to come here, because everyone else is," says one of the men, claiming to be eating his first doughnuts in 10 or 15 years. His friend, wearing a Colgate University T-shirt, seems to have more experience. He says the doughnuts "lived up to the expectations ... They're light, not greasy. They're crispy on the outside, and warm and tender inside."

Could you tell me your names? "No, no. Don't tell her," the wives loudly insist. The husbands are bewildered. In the ensuing argument, it becomes clear that the wives are not about to let the world know that they are spending a Sunday morning in a doughnut shop.

But that would hardly make them unusual. Angelenos are mad for doughnuts. There are doughnut shops on practically every corner, in every cruddy little strip mall. Besides the pedestrian doughnuts and coffee, there are shops that sell doughnuts and Chinese takeout, doughnuts and flowers, doughnuts and gasoline. You can buy doughnuts while you do your laundry. There's even a doughnut shop shaped like a doughnut. Early this year, when North Carolina-based Krispy Kreme began its incursion into Southern California, people waited in line two hours to buy dozens of hot glazed doughnuts.

Frankly, I don't get it. I just moved here, and I expected a populace that was colonically clean and Pilates-toned, one that ate tofu scramble instead of real eggs and that lived in homes made peaceful and productive by the magic of feng shui. That's all here, but what's up with the doughnuts?

I talked about it with Abe Price, a young Angeleno who recently graduated from law school, over doughnuts and coffee at Bob's in the Farmers Market. To Price, these are the finest doughnuts around, better even than Krispy Kreme, and he considers the best doughnuts a notch above the best croissants. He once took a first date to Krispy Kreme, but she was unimpressed and he was pretty thoroughly disgusted. "She couldn't admit that she eats doughnuts," he said. "The doughnut is a food of shame."

And they're tacky. Isn't Los Angeles supposed to be cooler than that? Aren't doughnuts junk food for cops and office workers and assorted night owls? They're working-class grub -- easy, cheap and sweet. And fattening. A serious doughnut habit will cost you hours of spinning on a stationary bike if you ever hope to scrunch into one of those little satiny sheaths from Fred Segal. Just try to catch Lara Flynn Boyle with a cruller in her fist.

The skinny on doughnuts: A yeast-raised glazed doughnut from Winchell's Donut House, the area's homegrown chain, has 210 calories, about half of them from fat. A jelly-filled doughnut from Dunkin' Donuts runs 310 calories, more than a third of them from fat, according to the Center for Science in Public Interest, a Washington, D.C.-based advocacy organization. Worse, says CSPI, doughnuts often are fried in fats high in artery-clogging trans fat, somewhat similar to saturated fat.

Nutritionally, doughnuts are full of holes. I asked Dale Ogar, managing editor of the Berkeley Wellness Letter, published by the School of Public Health at University of California-Berkeley, where the doughnut fit on the food pyramid. "I'm trying to think if it has any redeeming value at all ... I don't think so," she said.

So why are doughnut sales at about $2 billion a year, according to Modern Baking magazine? Another trade publication, Bakery Production and Marketing Magazine, says that as of November 1997, there were 9,743 doughnut shops in the U.S. -- 2,632 of them in California. (Next was Texas, with 995.) There are 1,650 shops in the five-county L.A. area, more per capita than anywhere else in the country, said Lou Franson, vice president of brand management for Winchell's Donut House, a 51-year-old chain of 300 shops, based in Santa Ana.

"It's the secret side of Southern California," he said.

A doughnut is like an earthquake: a real leveler. This is what Laura Davis, retail manager at the iconic La Brea Bakery, tells me. Even there, where the yeast starters are as good as gold, everyone loves doughnuts, and the shop sells them some mornings, alongside dried-fruit scones and other pastries of snootier lineage.

Doughnut devotees just don't care about the fat and sugar. How can health food deliver that dreamy, sweet, slightly greasy joy you get when you bite into a doughnut? Or better yet, that feeling of bliss if the doughnut is hot, when the dough is almost melting?

Edward Andrews' childhood home in Chattanooga, Tenn., had a back gate that opened onto a Krispy Kreme parking lot. He went through that gate "constantly." But for a long time in L.A., doughnuts held no special appeal for him. Now that Krispy Kreme has arrived, he makes pilgrimages and has converted his family. "Even my mother, who keeps strictly kosher, will sneak over and take a bite," said Andrews' wife, Tamar.

But it's more than taste or childhood memories that bring doughnuts and Southern Californians together. It's their cars. People here spend more time in traffic than anyone else, and doughnuts are good car food, powdered sugar aside.

A doughnut shop takes relatively little money but a huge effort, making it appealing for new immigrants willing to work zillions of hours a week. In Southern California, many independent doughnut shops are run by Cambodian families.

Whatever the cause, it's great for Krispy Kreme, which has four shops in the L.A. area and plans for 36 more -- setting off a war with Winchell's.

At Krispy Kreme, a neon light flashes when there are "Hot Doughnuts Now." Winchell's has installed lights that look like red police car lights to signal fresh, hot doughnuts. In January, Winchell's opened its own "see 'em made" shop in Pomona, similar to the glass walls at Krispy Kreme that allow waiting customers to watch the process.

Winchell's plans to sell new varieties of muffins and desserts. It already has some sandwich-chain partners. Company President Tom Dowling said he hopes to increase the number of outlets to 500 by the end of the year, and to increase sales from $60 million to $100 million.

Krispy Kreme has a more limited menu and boasts of making 1.3 billion doughnuts a year. Because the company has told the federal government it plans a public stock offering this year, its officials cannot talk about the company and so refused requests for interviews.

While doughnuts come in endless -- and sometimes unappealing -- varieties, it is the basic yeast-raised glazed doughnut most places are judged by. Winchell's sells a hand-cut version, while Krispy Kreme takes pride in its extruder system (which leaves no doughnut holes). Each company, of course, has a secret formula that produces the best doughnut on the planet.

But for retro-chic ambiance, the 62-year-old Krispy Kreme takes the doughnut. It's been praised in Elle, the New Yorker and GQ magazines, and featured on national TV. It is said that Elvis Presley demanded that a dozen fresh jelly-filled Krispy Kremes be at Graceland at all times.

Never ones to miss an opportunity to be hip, Southern Californians have been swarming the new Krispy Kremes. The first two shops, in very unhip La Habra and Van Nuys, each sell more than 400,000 doughnuts a week, said Richard Reinis, chief operating officer of Great Circle Family Foods, the Southern California franchisee of Krispy Kreme. And, he said, a zip code study showed that more than half the customers come from more than 10 miles away.

Kristy Wunsch, owner of the Hot Spot, a new shop near the beach in Venice, said cops say they don't patronize her place because they're sick of being stereotyped as doughnut fanatics. Then why is there a sign in the parking lot at a doughnut shop in Marina del Rey reserving a space for police cars?

Actually, soldiers, not police officers, can claim to have made doughnuts an everyday American food, though fried cakes have been around for centuries in many cultures.

During World War I, Salvation Army "Sallies" sent to France wanted to do something that would remind the boys of home. Baking was impossible in the tents and old barns where they set up, so the Sallies started frying dough, handing out as many as 9,000 doughnuts a day, said Diane Winston, author of "Red Hot and Righteous: The Urban Religion of the Salvation Army."

"The soldiers loved them. They were being taken care of, mothered," Winston said. "When those guys came home, they said, 'We want doughnuts just like the Sallies gave us.'"

Entrepreneurs obliged them, and in 1920 Adolph Levitt invented a doughnut machine, leading eventually to a doughnut shop population explosion.

Of course, the soldiers probably needed all the calories they consumed. Most of us do not. Millions of Americans are overweight, and hunks of dough deep-fried in artery-clogging shortening are not exactly what the cardiologist ordered.

As he left the Van Nuys Krispy Kreme, the guy in the Colgate T-shirt joked that he was on his way to the cemetery, to see all the people who'd eaten Krispy Kremes.

Sure they're dead. But they died smiling.

Mary MacVean is a freelance writer living in Los Angeles.