The Rembrandt of pulp 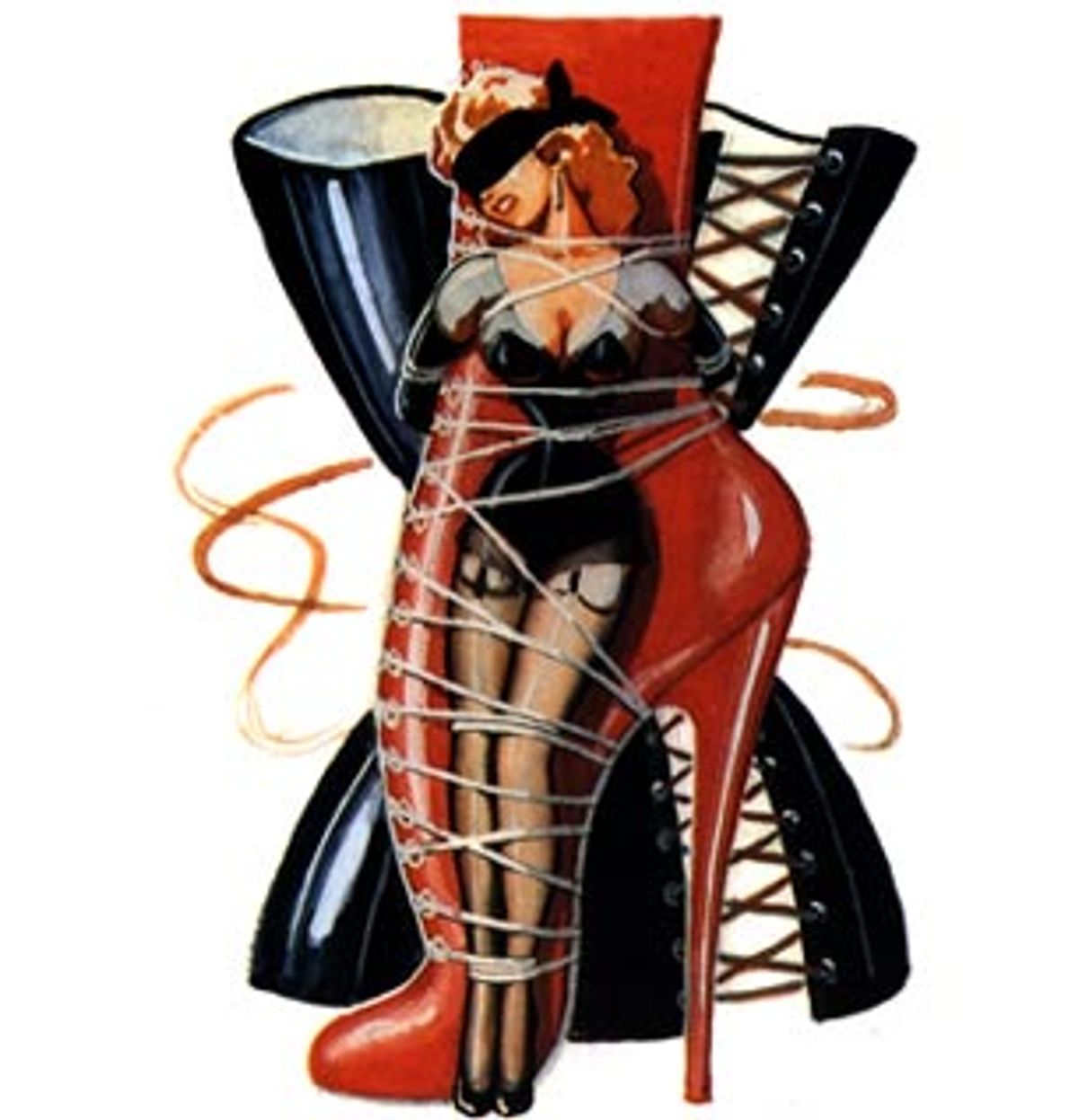 My college roommate was Mistress Domino. She was also Carrie, a freshman from upstate New York who didn't drink or do drugs or sociology assignments. Every day after class Carrie strolled down Fifth Avenue to a club near Wall Street, where she traded her sneakers for stilettos. She lounged on a satin sofa until a stockbroker tickled her Chanel vamp toes. Then she led him downstairs to a dungeon, called him a pig and swatted his behind with a horsewhip. That was all. Or that was all she would say after my jaw dropped when Carrie first told me about her extracurricular activities.

Like Carrie, J.B. Rund makes no apologies about a fondness for flagellation. "I'm not a pervert," the Manhattan-based publisher declares in a scotch-and-cigarette voice. "So I get excited by high heels? And women tied up?"

For more than two decades, Rund has been publishing fetish art, books and cartoons in an effort to bring fetishism to the mainstream. "My friends look at these cartoons and say, 'How can you get a hard-on from that stuff?'" he says. "But they only get turned on by ladies with big knockers. If they were normal, other things would excite them as well. I'm not sick; I'm different. Thank God for pistachio ice cream; it would be boring if everyone liked vanilla!"

In the 1940s, Willie created an obscure fetish magazine called Bizarre and produced four cartoon serials, of which "The Adventures of Sweet Gwendoline" was best known. He contributed to gentlemen's magazines such as London Life, Flirt and Wink -- publications with Cosmo covers that enticed readers with headlines like "Spanking for Wives" and "She Strips to Conquer." He also created private fantasy stories commissioned by mail-order customers.

Willie's real name was John Coutts. He was born to an upper-middle-class family in 1902 and flitted between London, Australia and the States, making drinking buddies on every continent, before dying of a brain tumor in 1962.

"I used to just look at the pictures," Rund recalls. "But when I finally read the Gwendoline serials, I realized that Willie's humanity made him better than all the others. His characters have dignity, which is very rare in pornography."

Typically, slapstick comedy underscored Willie's serial cartoons -- with the villain Sir Dystic D'Arcy drawing Gwendoline into "spine chilling melodramas placing her in pungent peril." In Willie's "Diary of a French Maid" series and depictions of D'Arcy's upper-crusty companion, a vixenish "Countess," it's clear the illustrator defected from his bourgeois homeland. The facade of breeding and etiquette is bared; underneath their couture, the "Ma'mselle" and the Countess are sadistic nymphos. The French maid and the farm-raised Gwendoline may be wild, but they stand by their man and you can bring them home to meet Mom.

Known for his generosity, Willie was survived by some staggering bar tabs. At the Cock N' Bull, his favorite Los Angeles tavern, patrons drained their glasses when Willie arrived, confident that he'd buy the next round. Cash-strapped clients were told, "Just pay me with beer money."

Intent on seeing Willie's true legacy remembered, Rund spent years trying to get his work published. Eventually he decided to do it himself and founded Belier Press in the mid-'70s. "The Adventures of Sweet Gwendoline" sold 26,000 copies. Belier Press later published the first books about voluptuous 1950s pinup queen Bettie Page, as well as books by underground cartoonists such as R. Crumb and Art Spiegelman, creator of the "Maus" series.

While the content may have been risqui at the time, Willie colored within the lines in order to blend into mainstream publications. "He works within the clichi; he's naughty in content yet so sweet in his representation," observes California painter Whitney Cowing. "He doesn't push the boundaries artistically; Willie wants to seduce good ol' boys with an artistic style they are familiar with and a subject they have only dreamt of."

Willie was known for his use of conventional crosshatching and other rustic pen marks to characterize the villains and a smoother, more idealized form for the heroines. Instead of explicit depictions of sex, Willie would bob and weave with an innuendo punch, unlike certain contemporaries who depicted "some despicable acts," as Rund puts it. Willie's two-step may have been a bow to censors (some of his private drawings were far more prurient), yet Rund believes that Willie was indeed bound by morals. "Willie grew up watching silent films," Rund notes. "When he saw a woman tied up, he wanted to rescue the damsel, not rape her. In the context of Victorian melodrama, you can't defile the heroine."

Even Willie's harnesses and masks have a feathery delicacy. One illustration depicts a bird untying the laces of a high heel, and the reader almost expects Snow White to skip into the series. Willie had married Holly Anna Faram, who became his model and muse. When acquaintances first visited his apartment, a black-and-white photo of a naked woman tied to a tree greeted them. "Oh," Willie would shrug, "that's the missus."

Faram stayed in Australia when Willie decided to live in the States, but the couple remained married and Willie maintained a platonic understanding with his other models.

Rund contends Willie was the first fetish artist who illustrated only from models or from photographs he took himself. American fetish artist Eric Stanton, who specialized in illustrations of "fighting femmes" in the late 1940s and early '50s, was a contemporary illustrator also noted for his realism, but "Stanton would create a fantasy and pretend it's real," Rund says. "Willie took reality and made it fantasy. But his realism made it unique; you could imagine these things happening because the poses were real." But Rund distinguishes between proclivity and pathology. "For Willie, tying a woman up was a preference, not a necessity," he writes in the book's introduction.

"Some guys get excited by white panties but can't get excited without them. You have to control the urge instead of letting the urge control your life," Rund says. He was careful to package the book with a bow rather than a whip. "I try to present this [genre] as history," he explains. "But I don't feel a need to apologize for it. I don't pretend this stuff is about love."

It's not about hate and misogyny, either. Rund is quick to add that Willie genuinely liked women and portrayed his female characters as the brains and his males as empty brawn. "You look at bondage and domination Web sites and they're nailing tits to a table," the 57-year-old growls. "Today you tie 'em up and fuck 'em, but with John Willie you only imagined that part. If Sweet Gwendoline is alone with the villain Sir Dystic D'Arcy, another character enters the picture before anything can happen."

"What set John Willie apart was his humanity," Rund says. "There was a part of him that was still that little boy reading a fairy book and fantasizing about rescuing a damsel in distress." It was better that Willie's readers had to wonder whether the boy got the girl. "If you have everything you want," Rund says, "there's nothing to look forward to."