The Amazon CEO's plan for patent reform is not all new, but it's not all bad, either. 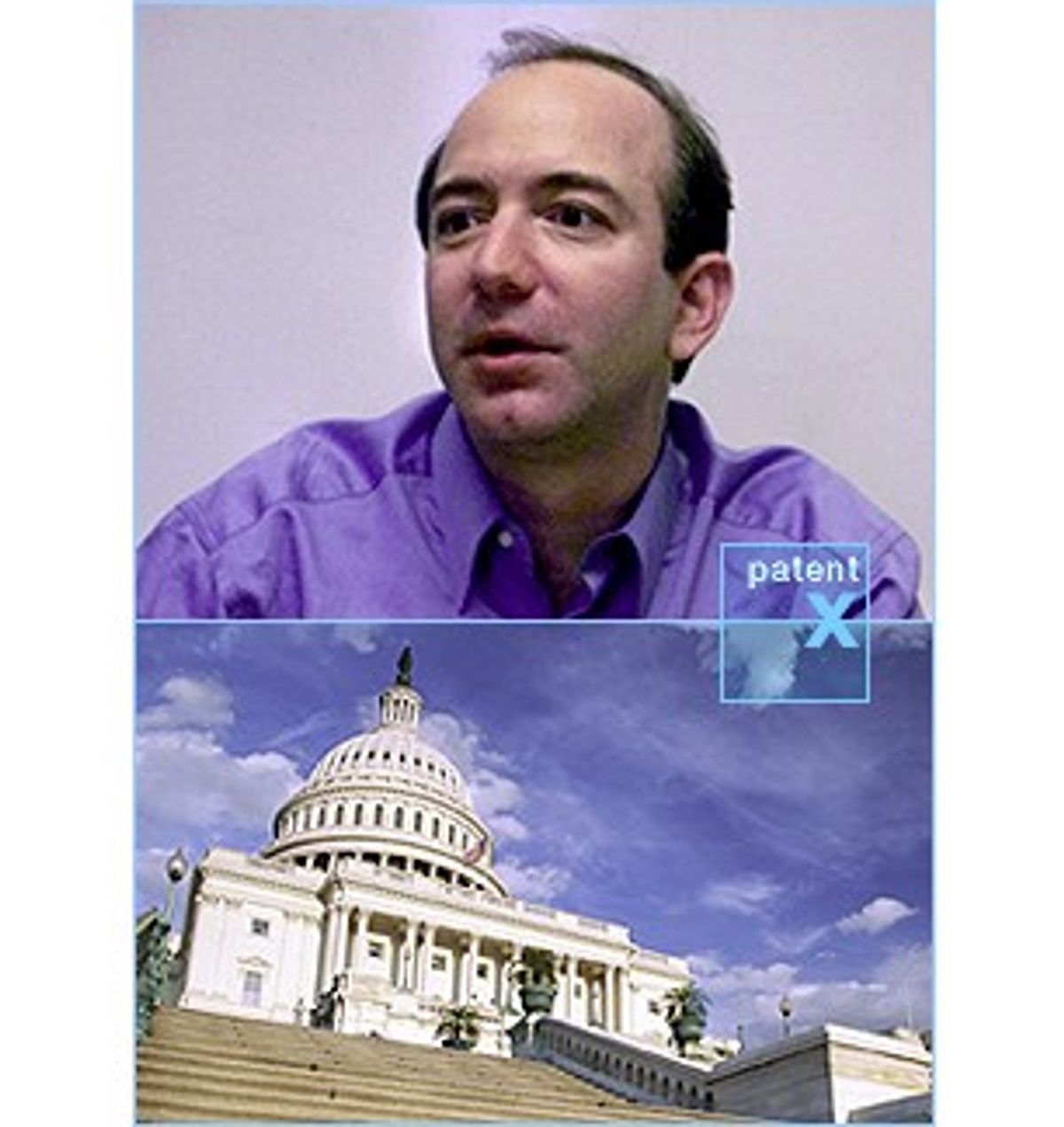 When Amazon CEO Jeff Bezos laid out his proposals for
reforming the patent system last week,
patent experts reacted with the same
lack of enthusiasm the bookseller's
competitors showed when it won a patent
on its customer-referral program. After
all, Bezos' plan, like some of his
company's e-commerce patents, did not
sound all that novel to people familiar
with the subject.

"This is really nothing new," says Randy
Lipsitz, partner at Kramer, Levin,
Naftalis and Frankel. "He's not the
first person to have spoken out against
the patent system." In fact, he's not
even the first to introduce the main
ideas of his proposal: to create a
special set of laws to govern software
and business-method patents, to shorten
the life span of such patents and to
create a database of prior art to help
educate the Patent Office about existing
innovations. (He may, however, be one of
the few to suggest patent reform while
trying to quell the public outcry
against his own company's patents --
Amazon's patents on 1-click purchasing method and
affiliate program for
customer referrals have been roundly
criticized for being obvious
"inventions" that shouldn't have
received patents.)

In a 1994 Columbia Law Review article
titled "A Manifesto Concerning the Legal
Protection of Computer Programs," Pamela
Samuelson, an intellectual-property
expert and law professor at University
of California at Berkeley, called for a
new kind of legal structure to protect
software developers' rights -- something
more protective than copyright law, but
less so than traditional patents.
Essentially, Samuelson argued that the
strong, wide protection of patents
threatened to hinder technical advances
in the field. Given that software is
typically built in pieces, with
different developers contributing new
programs or elements that work on top of
existing software, patents on the
underlying software could deter
newcomers from building on it; to do so
they generally have to pay a licensing
fee or risk a lawsuit. According to
Samuelson, such strong software patents
are contrary to the Constitution, which
empowered Congress "to promote the
progress of science and useful arts, by
securing for limited times to authors
and inventors the exclusive right to
their respective writings and
discoveries."

Samuelson also tackled the time-limit
issue that Bezos brought up in his
proposal: While the "Manifesto" did not
propose specific software patent time
limits, in testimony before Congress,
Samuelson says she and her co-authors
suggested that a fair life span for
software rights protection would be "in
the neighborhood of three years."

The
law provides for 17 years of protection,
because it is trying to ensure that the
inventors of costly inventions, such as
pharmaceutical drugs, can recoup their
investment before their patent runs out.
But software is not nearly as
complicated or expensive to produce, and
there's a theory commonly espoused by
patent attorneys that the software
world moves about five times faster than
the industrial one that the patent
system was designed to protect; as a
result, software-related patents,
including those covering business
methods, deserve only one-fifth the
protection. Besides, software is likely
to be long outdated by the time 17 years
have passed.

"Internet technology is advancing so
rapidly that a three-to-five-year term
would -- its proponents would argue --
have the same practical effect as the
current 20-year-from-filing term," says
Timothy Shea, a Boston patent attorney.
In the proposal
Bezos posted to the Amazon site, he also
argues that "fewer people will bother to
apply for three to five year patents,"
if only because the return on investment
-- patents can cost anywhere from
$25,000 to $100,000 -- doesn't justify
the cost.

But the Patent Office isn't buying such
arguments. "Limits on patent life spans
exist in the form of re-registration,"
says Brigid Quinn, a spokewoman for the
Patent Office. "After four, seven and 11
years, patent-holders are required to
pay a maintenance fee. If they don't
want 17 years of protection, they
simply don't have to pay the fee."

And if Bezos thought his newfound desire
for patent reform was original, well
Jeff, it's been around. "Since the 1950s
the courts and the Patent Office have
been grappling with whether or not
software could be patented," Samuelson
says. Patents typically cover mechanical
inventions and processes, but in theory
they don't cover ideas; the question is
whether software is a process or an
idea. So far Congress, which is the only
body that can change the law, hasn't
weighed in on the subject. "In the
political environment of the United
States, it's always been an uphill
battle."

The main U.S. lobbying forces that might
spur Congress to action -- corporations
-- have not been keen to remove
protections that benefit them. "There's
too much of a vested interest," says
Gregory Aharonian, publisher of a
newsletter called the Internet Patent
News. "Companies like things the way
they are."

Now the question is whether the
political punch packed by Bezos, a new
economy billionaire and Time magazine's
person of the year, is enough to create
a change. If he's serious about patent
reform, he'll probably need the support
of e-commerce peers like Priceline CEO
Jay Walker, who has patented his site's
reverse-auction business process and filed for more than 250
Internet business patents, as well
as folks in the financial services
sector -- who started patenting business
processes even before the commercial Net
existed.

Lawrence Lessig, director of Harvard's
Berkman Center for Internet and Society
and the former "special master" in the
Microsoft antitrust case, sounds
hopeful. Bezos' plan "signals an
important difference about this
generation of e-commerce [business
people] vs. those of IBM or AT&T," says
Lessig. In other words, while
traditional technology companies that
have spent well on R&D have a lot
invested in patents, the more nimble
software-based companies might have more
motivation to change the system.

For Bezos the motivation came directly
from the Net. In January when Amazon
sued rival (and Salon.com bookselling
partner) BarnesandNoble.com for
infringing on its "1-click" patent -- a
purchasing system that uses cookies to
identify repeat customers and let them
use previously entered credit card
numbers and addresses for new purchases
-- Netizens called for a boycott of
Amazon. Then in February, Amazon won a
patent for its affiliate program, which
hundreds of other retailers use to
encourage partner sites to refer
customers in exchange for a percentage
on any sales made.

Apparently, it was
all the Net could take. Within days,
Tim O'Reilly, CEO of O'Reilly and
Associates, a publisher of computer
books and software, posted a letter denouncing Amazon's
patents. Less than a week later, 10,000
people had added their own screeds to
O'Reilly's site. Bezos relented, a
little; he didn't offer to give up the
patents, but he did set forth on his
ideas for reform.

Bezos may gain some points with the Net
crowd for listening, but its not just
the help of tech types that Bezos would
need to start the congressional reform
gears in motion; Wall Streeters actually
have been patenting e-commerce business
methods since well before the term
e-commerce was invented. Since the 1980s
financial services firms have won
patents covering everything from Merrill
Lynch's "two-way wireless system for
financial industry transactions" (patent
number 5,915,245), to Charles Schwab's
electronic bill system, which lets a
financial institution pay its customers
household bills electronically rather
than with checks (5,978,780).

"If the guys in the button-down shirts
say the system doesn't work for us, it
would be hard for Congress not to
listen," Samuelson says. "They have the
clout; they don't look like a bunch of
ragtag Internet hippies trying to get
out from under the strictures of the
patent system, which is exactly how the
anti-patent crowd has been portrayed."

It's far too early to say whose support
Bezos can garner, but even if he doesn't
organize a million-man march on
Washington, there's hope for the
"ragtag Internet hippy." Patent experts
say Bezos' best chance of effecting
change may come from his suggestion to
create a database of prior art. Such a
database, which he has offered to fund
with his own money, would not have to
involve the Patent Office or Congress --
it could be up and running as fast as an
Internet entrepreneur could get it
going. Essentially, it would help solve
what many consider to be the patent
office's biggest problem: examiners'
inability to find prior art that might
keep them from issuing a patent that
should have been rejected.

Of course, Bezos wasn't the first to
dream up this plan. Lots of patent
attorneys and historians have suggested
that such a database would solve a lot
of problems. Aharonian, who makes a
living disproving the validity of
patents for corporate customers, has
already started his own arsenal --
storing examples of existing innovations
that can be used to contest bad patents.
"On average, issued software patents are
missing three or four prior art
examples that should have been cited,"
says Aharonian, who says he would need
$5 million to $6 million to complete the
database he has already started. By
making such data available to the Patent
Office, perhaps fewer bad patents would
be issued.

Already the Patent Office is behind it;
Quinn says it's "a need we have often
noted."

But that doesn't mean the Patent Office
is eager for any other sweeping software
patent reforms. As Quinn puts it: "We
believe the existing patent law works as
well for new technology as it has for
old."