"A Plague of Frogs: The Horrifying True Story" by William Souder

Does a sudden upsurge of five-legged croakers spell the end of the world? 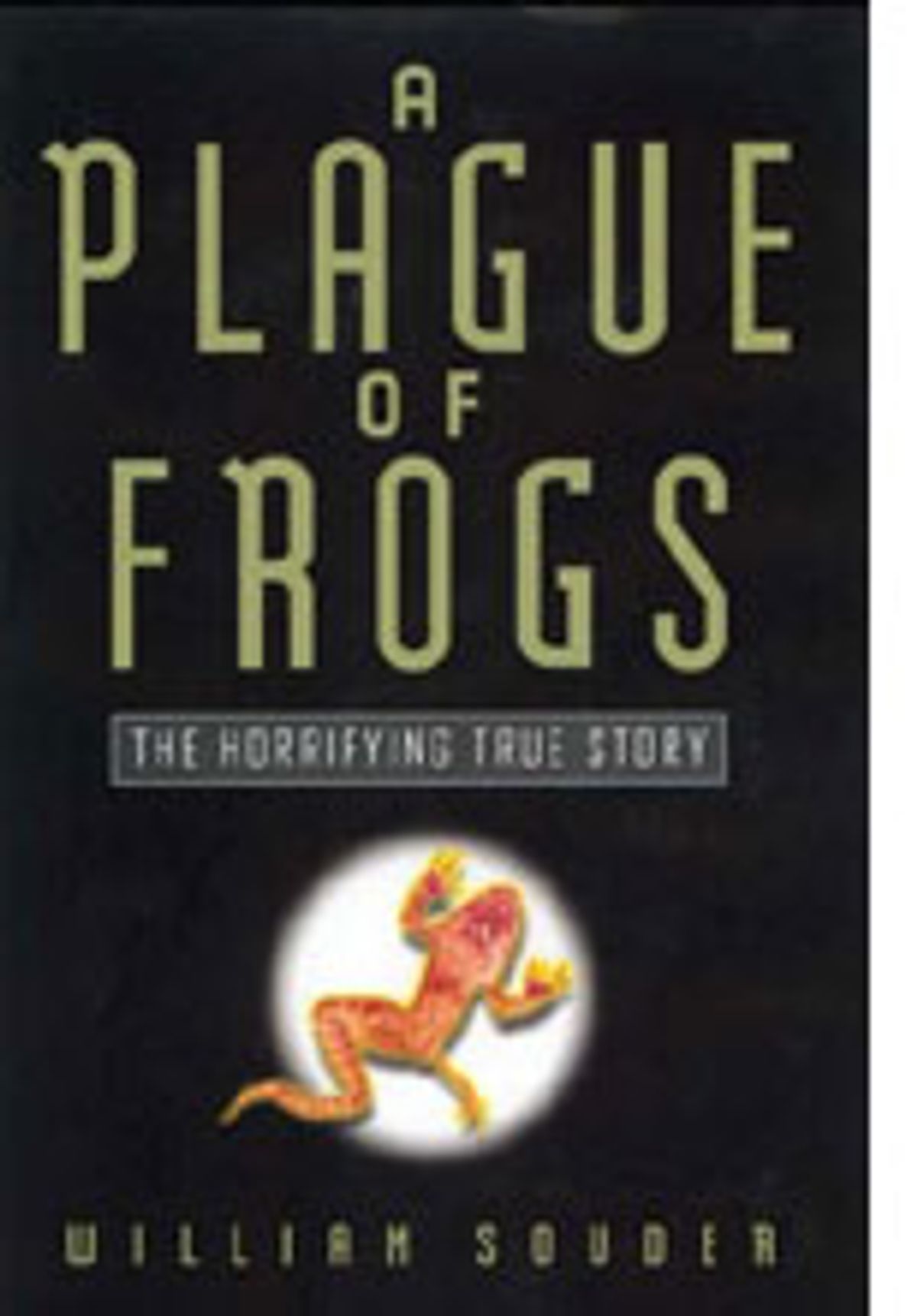 While reading William Souder's "A Plague of Frogs," I conducted a running survey of friends and acquaintances about their awareness of the deformed-frog problem. I found a ubiquitous but low-level awareness of the situation. Everyone had heard some alarming news report a few years back; nobody knew what it all meant or what the cause was. Somewhere, everybody recalled, frogs were turning up with a lot more legs than they needed. So a book like Souder's would seem to be coming along at just the right time to tie together the answers that science has surely found by now -- right? Not quite. "A Plague of Frogs" earns its subtitle, "The Horrifying True Story," by showing that the problems affecting amphibians are far too environmentally complex to be easily solved.

It was in 1995 that a group of schoolchildren out for a nature walk first found a chillingly high number of deformed frogs in a Minnesota pond. (Scientists prefer to term these creatures "malformed," but the "deformed" label has stuck and is now used universally.) Within a short time, other populations of creepy-looking frogs showed up all around the Land of 10,000 Lakes, as well as in other states and in parts of Canada. Frogs are extremely permeable creatures and spend most of their lives in the water, so they have acquired a reputation, deserved or not, as canaries in the coal mine when it comes to water quality. Whether the connection has any scientific basis or not, the feeling is inescapably there when you wade into a puddle full of monstrous croakers in the middle of your watershed: Today it's Kermit's problem, but tomorrow it could be my newborn daughter sprouting an extra leg.

Souder, who first covered the phenomenon for the Washington Post, utilizes a "how I got that story" approach throughout. The reader follows along as he interviews scientists, hangs out around the coffee urn at conferences and staggers through thigh-deep muck to net study samples. It soon becomes apparent that establishing a base line of the "normal" level of deformity is a tough but important endeavor. Souder also paints an interesting and disturbing picture of the quietly vicious infighting that takes place between scientists of competing laboratories as they debate all the possible causes, from parasites and pesticide-sourced retinoids in the water to increased ultraviolet light from the ozone-depleted sky. If you think scientists are dispassionate seekers of the truth without also being passionate builders of successful careers, you will come away wiser.

By that time, though, you will also have been disappointed by Souder's graceless, chunky prose. Ultimately, the reader is far more interested in the story -- what the heck is happening to frog populations? -- than in how Souder tracked down the details; with less "how I got" and more "that story," this book could be a slimmer, clearer examination of a complicated problem.

But these reservations cannot really detract from the complex and troubling conclusions of "A Plague of Frogs." Where we expect one ultimate answer to the problem -- one pesticide we can ban, say -- we find an interlinking of many possible culprits, most of them of our own making. And suddenly both the canary and we seem to be not in a coal mine but in an enormous maze.