When my son joined the Cub Scouts, I didn't expect him to learn about peckers, pedophiles and Jesus Christ. 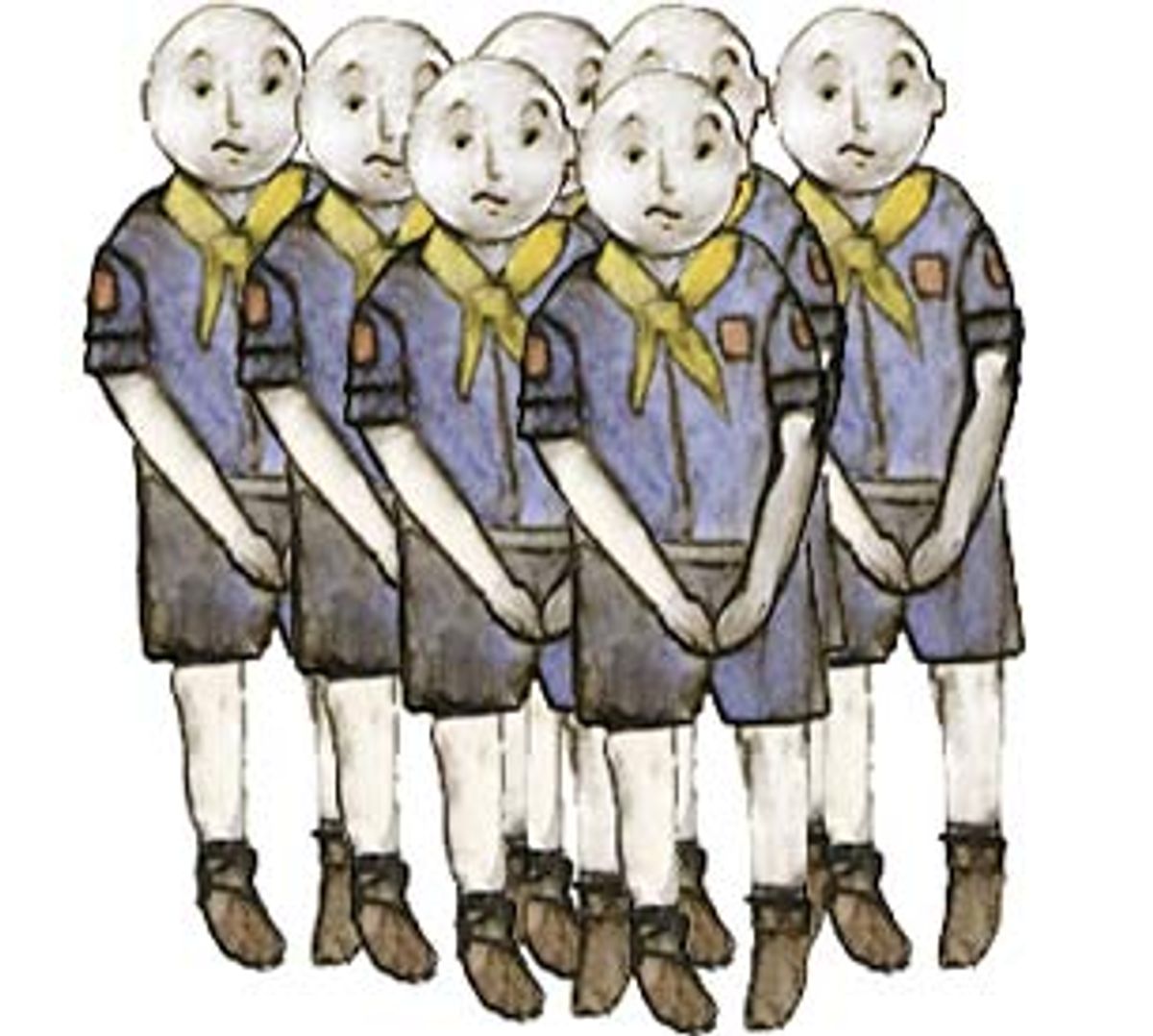 Today's Cub Scout Handbook takes 8-year-old boys through a maze of sinister scenarios designed to prepare them for the dangers of the modern world:

Answer these touchy questions correctly, build a rain-gutter model boat, go on a nature walk and you earn a Wolf badge.

When my son, Mikey, announced that he wanted to join the Cub Scouts, I fully expected the Cub Scouts to be about knots, camping trips, tag-team races -- as it was when I was 8. These relics of past scouting days are still there. But scouting today also includes lessons in how to avoid the neighborhood pedophile. That, I suppose, is a lamentable sign of the times, and I understand it. But I did not expect the leaders of our local pack (being wolves, of course they call themselves a pack) to embark on a series of lessons that scared the bejesus out of my son and the rest of the boys.

At a pack meeting last spring, Jack, the assistant pack leader, a tradesman who lifts weights when he's not busy hauling Sheetrock, went over some of the loaded questions on personal safety raised in Chapter 12 of the Wolf Handbook.

I wasn't there, but as best as I can determine, here's what happened:

Tim and Alex were playing keep away from Billy. Charlie and Andy were using the cat as a midair projectile. Joe and Danny were arguing over whether Pikachu had more Pokimon power than Jigglypuff or Kangaskhan.

Jack, the parent in charge, was getting frustrated. Seven 8-year-olds running around your basement would be enough to make Dr. Joyce Brothers wig out. So Jack got tough.

"Sit down," Jack bellowed, his voice bouncing off the oak paneling of the basement walls. "Here's a true story that I want all of you to remember.

"A friend of mine knows a boy who went into a public bathroom. Inside there was a stranger who took a big, sharp pair of scissors and cut the boy's pecker off. Snip! That was it."

Jack's news flash was an attention-getter. The only thing you could hear was the sound of seven jaws dropping.

Then Mikey raised his hand.

Jack said a pecker was the same thing as a penis. The boys looked at each other and then back at Jack. Total silence. For probably the first time in their lives, these boys had heard an adult tell a story about private body parts in public. And no one was giggling hysterically.

The story was no joke, Jack said. It had actually happened.

On the car ride home, I asked Mikey about the meeting. He said it went OK.

But that night, at 9 o'clock, Mikey shouted from his bedroom, "Dad, I can't sleep."

10: "Daddy, would you come in here, there's something really bugging me."

Mikey's eyes were filled with tears. "Jack said something at the pack meeting that was really scary."

True to his word, Mikey wouldn't give up the story. Not until the next evening, over dinner, did Mikey come clean. After some prodding, he spilled the saga of the pecker. The only thing Mikey liked about the whole episode was that he had learned a neat, new word.

My wife and I were steamed. Did Mikey really need to know the details of such a crime? And who says it ever happened? When Lorena Bobbit cut off her husband's penis, the whole world knew about it. Was this just another urban legend, like the one about the mouse that crawled into the batter machine at a friend of a friend's local Kentucky Fried Chicken?

But that really wasn't the point. Another parent had conveyed something terrifying to a room full of 8-year-old boys. I can't vet everything that comes out of every adult my son has contact with, but this story seemed to go beyond the pale. What was the point? To scare Mikey from ever going to the restroom at the mall?

I called up the parents of two other boys who had been at the pack meeting. Alex's mother said that as soon as Alex got in the car, he blurted out everything and demanded to know whether the pecker story was true.

Danny's mother said Danny didn't mention Jack's tale, but that night, out of the blue, asked a raft of questions about circumcision.

Jack wasn't just the assistant pack leader. He was also the coach of the school soccer team.

When I called to confront him, Jack launched into a profuse apology. "What I did was indefensible," he said, stumbling. "It was wrong. It was really indefensible."

Indefensible? Where did he get that?

Over the next three minutes, Jack said "indefensible" six times. It sounded as though Jack had prepared a statement, should any of the parents consider suing him for intentional infliction of emotional distress. Who knows? Maybe Jack was a "Law & Order" junkie. Maybe his brother-in-law was an attorney.

The pecker caper proved to be a kind of watershed. Over the next several weeks, more and more stories about Jack surfaced, which Mikey and the other boys had kept to themselves. They weren't the kinds of things that made headlines, but when pieced together, they described a very disturbing style of parenting.

The boys said Jack had a habit of scolding his son during Scout meetings: "I'll pound your head in," he'd say, then laugh uproariously. During soccer practice, Jack made Alex and Charlie do laps around the field if they made a mistake. He derided Louie, the team's star player, and benched anyone who didn't follow the strategies in his game book.

Jack was a drill sergeant. Maybe that's why he liked the Cub Scouts and uniforms so much. But Mikey hadn't joined the Junior ROTC.

Where did that leave us? Mikey decided to join another soccer team so he wouldn't have to deal with the wrath of Jack. Mikey doesn't want to quit Cub Scouts -- and he shouldn't have to -- but this year, he's laying low. Several of the boys' parents have instituted a rule that requires two adults be present at each pack meeting. I was able to persuade Mikey to skip a sleepover at the local Science Center. We're trying to ease our way out of the Scouts.

So if I find the local pack leaders lacking, why don't I get more personally involved in the den? I was a Cub Scout and I went to Boy Scout camp for six years. Like most parents, I can cite the fact that my time is at a premium. But there's a deeper reason why I'm not teaching the knots I memorized 35 years ago: I don't trust Jack -- nor many of the other men in the pack who dress up in oversized boys' uniforms, kerchiefs and badges. I don't want to be around them and I don't want my son to be around them. At a monthly pack meeting, one father in uniform stunk of booze. Nothing wrong with a guy hoisting a couple of brews after work -- but not before going off to supervise 40 boys.

I'm also not sure whether I believe in the rigmarole of Scouts any more. Does every pack meeting still have to start with the fascistic right-hand-over-heart Pledge of Allegiance? This blind adoration of God and Country gives me the willies. It was made optional in public schools 35 years ago, but is required in the same school gymnasiums three hours later at Scout meetings. What's the point? Are these boys going to be backups when U.S. troops head from Kosovo to East Timor? I hope not.

Not long ago, at a Scout meeting where the topic was the Golden Rule, the scoutmaster explained why The Rule was very easy to remember: "All of us in this room have been taught to believe in God and Je --" just as the scoutmaster was about to finish with "sus," I stood up and arched my eyebrows into upside-down V's. The scoutmaster caught my glare and suddenly stopped short.

I was furious. Since when did the Cub Scouts preach Jesus Christ?

Scouting -- at least in Pack 202 -- has turned into a quasi-religious, macho-fest run by overgrown kids who now happen to be fathers. Jack and the pecker saga acted as the catalyst to scare Mikey and me away from the Cub Scouts. And Jack is still around, as active as ever, bucking to be promoted to pack leader. He may be a bully or just someone who exercised poor judgment -- but I don't think he's the only rotten apple in the barrel. I wonder just how unusual he is these days.