It was like a dream: One moment I'm in homeroom and the next I'm sipping Shirley Temples on a private jet. 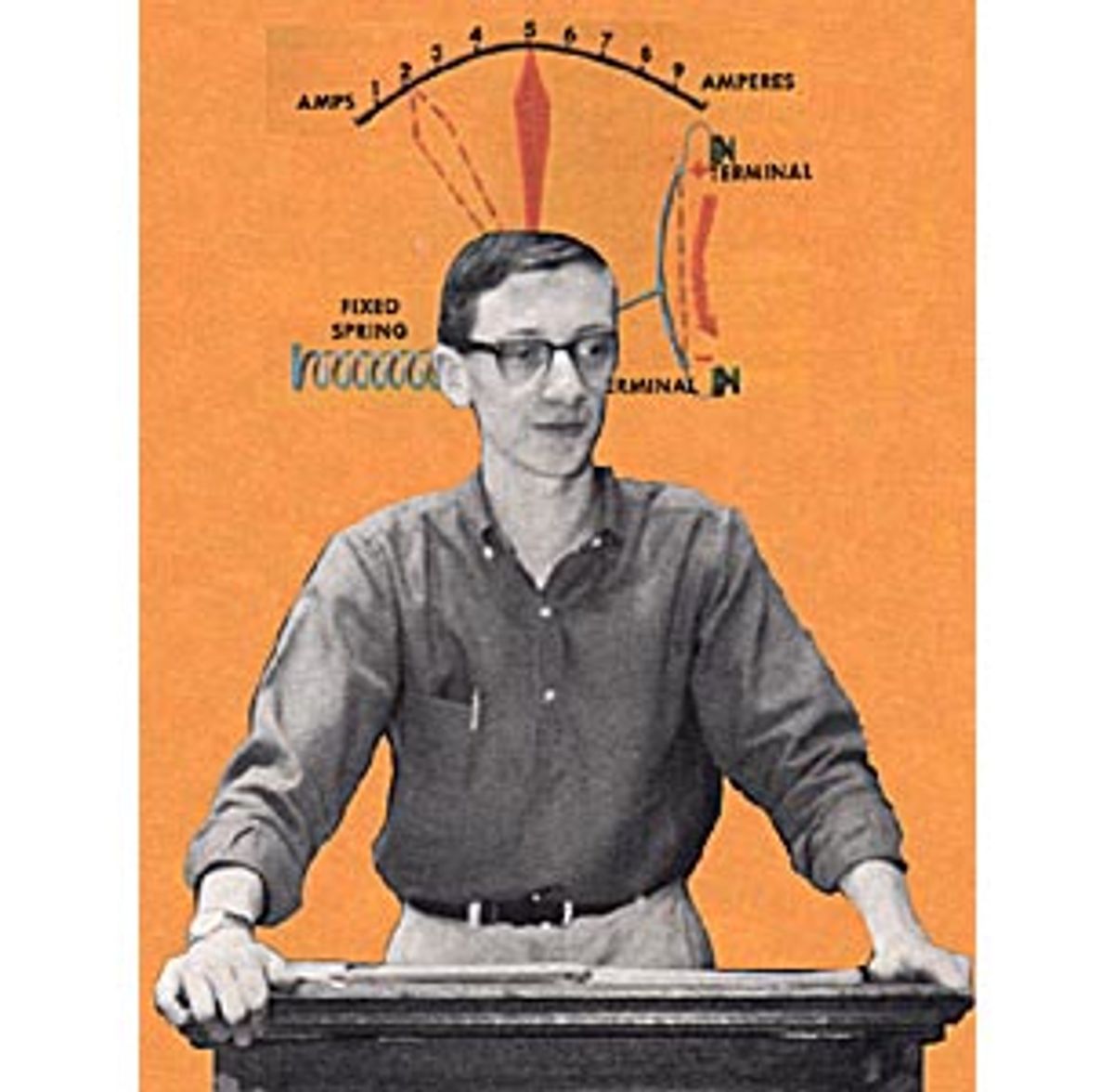 Once upon a time, when air brakes and refrigerators were the bleeding edge of technology, Westinghouse was a name that stood for industrial genius. So it made perfect sense, back in 1942, for this industrial behemoth to launch the celebrated "Westinghouse Talent Search," thus linking its corporate moniker with, ostensibly, the best and brightest young scientists in the nation -- and to begin recruiting the technocrats of the next generation. Hyperlink back to 1998: Westinghouse is another exhibit in the Hall of Dead Corporations, and Intel is the shining star of today's technology moment.

Thus it came as no surprise that the Westinghouse Science Talent Search was re-branded as the Intel Science Talent Search. It's still touted as America's oldest and most prestigious pre-college science competition, nicknamed "The Junior Nobel Prize." Although the prefix has changed and the prize upgraded to befit the riches of a New Economy benefactor -- the winner is awarded a $100,000 four-year scholarship -- the structure and intent of the search has not changed under Intel's stewardship. Their goal is to identify the scientific leaders of the future and impress upon them, at a very early age, that Intel is a progressive employer of choice.

Somehow, I became one of those putative scientists of the morrow (although I remain convinced that there is some kid with my name in Iowa who cured AIDS but didn't advance in the competition because of a faulty spell check). On March 8, as an Intel finalist, I joined 39 other high school seniors in Washington for a week of intellectual festivities, high-level schmoozing and to ultimately choose the top 10 students, who will be awarded varying amounts of scholarship funds. (Relax, the scientific future of the land is secure: I wasn't one of them.)

Along with six other finalists from Long Island, N.Y., I was whisked away to Washington on a U.S. Airways shuttle. Intel, while not trading at dot-com valuations, was still wealthy enough to pay for the airfare and stay at the Mayflower Hotel. It also arranged for another corporate sponsor to pick up the tab for fine dining (including shimmering crystal dumplings at Mr. K's, an illustrious Chinese restaurant) and a trip to a comedy club, where my peers howled and guffawed at bad in-the-Beltway humor, like yokels looking at a color television.

To ensure that we wouldn't say anything dumb, or do anything embarrassing like promise to lecture at Bob Jones University, we were given some media training. Jack Franchetti, who looked like his dreams of an acting career had been reduced to teaching others how to seduce a camera, instructed us to make our "points quickly and efficiently, have a clear and definite message and be prepared to answer tough follow-up questions by anticipation." Quite clearly, Intel views the talent search as a public relations bonanza, as the media can't resist fawning over these "Nobel Prize winners of the future." We aren't just finalists, after all, we are adolescent evangelists for Intel, and if some of us are zit-burdened and dorky, so much the better. During the media training, most of the other 39 finalists furiously took notes -- graphite flying and pages flipping -- while I scribbled material for a future screenplay.

If you're thinking that I felt like a fish out of water, you are correct. In fact, if my trip to Washington were described in Intel project-speak, it would be "The Effects of Extended Scientific Immersion on a Liberal Arts Homo Sapien." I'm convinced that my entry was selected because it was so understandable, and thus a wonderful sound-bite candidate. The project involved a unique way to assess public opinion without the subjects' knowledge. The methodology was a derivation of a process known as "The Lost Letter Technique." To compare attitudes of urbanites with suburbanites, I dropped stamped envelopes addressed to fictitious and provocative organizations such as "Legalize Gay Marriage" and "Fight Gay Marriage" in Manhattan and Nassau County, N.Y. I also "lost" fake wedding invitations. By analyzing the number of letters returned in each experimental cell, one is able to derive a genuine measure of public sentiment, without observational bias. Fifty-six percent of the letters were actually mailed by people, and city residents were generally more liberal than suburbanites, but both groups were equally altruistic. I found parking-lot attendants especially lacking in compassion: One threatened to arrest me when I tried to do a drop-off.

After we were turned into media mavens, the next stop was a congressional meet and greet. A few congressmen and government officials sauntered in, shook some hands, hurled themselves in front of the television cameras and left. I made small talk with Craig Barrett, Intel's president and chief executive officer, and Dudley Herschbach, who won the Nobel Prize for chemistry in 1986. The highlight of my evening was a rumor from several sources that Sen. Ted Kennedy's personal assistant walked in, and seeing that the bar was virgin, left very quickly. Kennedy never appeared. The next day the judging began: three 15-minute interviews focused on chemistry, physics and biology. The assumption is that all the chosen 40 projects are worthy of being in the top 10, and that the discriminator is the scientific depth, imagination and creativity of the candidate.

I witnessed the parade of shell shocked and intellectually spent predecessors who had had to answer questions with little or no relevance to their projects. I quickly realized that my only hope was to replace ignorance with shtick; at least one of the semifinalists, I reasoned, should be Letterman material. During the biology interview, one of the judges said: "I know you're not a biologist but please design a biological experiment by which you could determine what DNA in salamanders allows them to regenerate lost limbs, an ability humans lack." I responded, "Jeez, why don't we start with a hard question? I mean, I thought I'd finally be challenged down here." When I was later asked to explain recombinant DNA, I responded, "This is going to be an incredibly short explanation."

My playful persona did get me a special recognition; the judges said I was the funniest Science Talent Search finalist they had ever met. That's not much of an honor, though. Have you ever noticed that there has never been a sitcom set in a research lab?

The better part of the next few days was spent at the National Academy of Sciences, where we exploited our newfound sophisticated media skills as we painstakingly explained our projects to an uninterested public. It was during these days that the neuroses of the finalists were truly exposed. Talent has never been mutually exclusive with insecurity. Thus I heard a litany of: "Why aren't the judges spending more time on my project?" "That judge doesn't like me!" And, "I think I wore the wrong tie." But there were no Tonya Harding moments; it was internal angst, not external envy. I was reasonably relaxed about the whole thing; I had no delusions of scientific grandeur. My getting chosen as one of the top 10 would've been tantamount to Homer Simpson being selected to go to the moon.

Back in the 1950s, novelist and sociologist C.P. Snow wrote about how the world falls into two societies, the scientific and the liberal arts. More than a half century later, I still felt that intellectual rift (I was the only finalist who had seen an Ingmar Bergman film, for example). The depth of this split was most evident at the Vietnam Memorial. Maya Lin's testimony is stark and simple, a construction that emerges from a torn earth. The names, the names, what more matters? Taking it in, the other finalists actually remarked, "This is it?" The simple elegance and power of the monument evaded them; they continued their discussion on the advantages of a cable modem. As I moved by the Gettysburg Address and Lincoln's marble map of sadness and inspiration, the other finalists were more interested in calculating the distance to the Washington Memorial. This isn't to celebrate my sensitivity; it is to point out that there remains a psychic barrier between the arts and the sciences, and that each side must work to finesse a proper balance.

When we donned tuxes for a black-tie dinner and the moment-you-have-all-been-waiting-for finally arrived, there weren't many surprises. The top 10 winners deserved their glory. I wasn't able to stick around and see what happened after the announcement. Along with Viviana Risca, a high school classmate who won the $100,000 scholarship (her project used DNA as a medium to study encryption), I was whisked away on a private jet bound for New York for an appearance on "Good Morning America." The jet was graciously provided by Popular Science magazine. Why me? Clearly, my shtick-meister strategy had succeeded.

The jet flight was most educational: The president of the magazine reminded me to plug his publication on the air, but with the price of jet fuel these days, I should have expected a quid pro quo. The next day was sublime; transported in hushed limousine comfort from green room to green room, interview to interview, I felt like an instant media darling, the geek equivalent of Elian Gonzalez's grandmother. I also felt a bit like Zelig: Because I wasn't in the top 10, I perfected the art of standing around and nodding sagely while interviewers badgered the winner. Occasionally I was asked to confirm Viviana's brilliance.

I am sure there are those who think the Intel competition is a wonderful program, and others who view it as elitist extravagance. Having been through the entire cycle, I'm convinced that the talent search is a valuable artifact, and its recent expansion to the social sciences (without which I would never have experienced Mr. K's dumplings) was the right thing to do. The 39 kids I spent six days with were really smart and dedicated. If some are really boring, that's OK; it's a free country. And it is not inconceivable that a handful of these analytic monsters could change the world, and might not have had the opportunity were it not for this program. Considering the usual wasted byproducts of public relations spinning, I'll settle for innovators any day. Like the lost letter project, the competition restored a skeptic's faith in humanity.