The sky's the limit

Flight attendants can fly anywhere for almost nothing -- but sometimes, there's a catch. 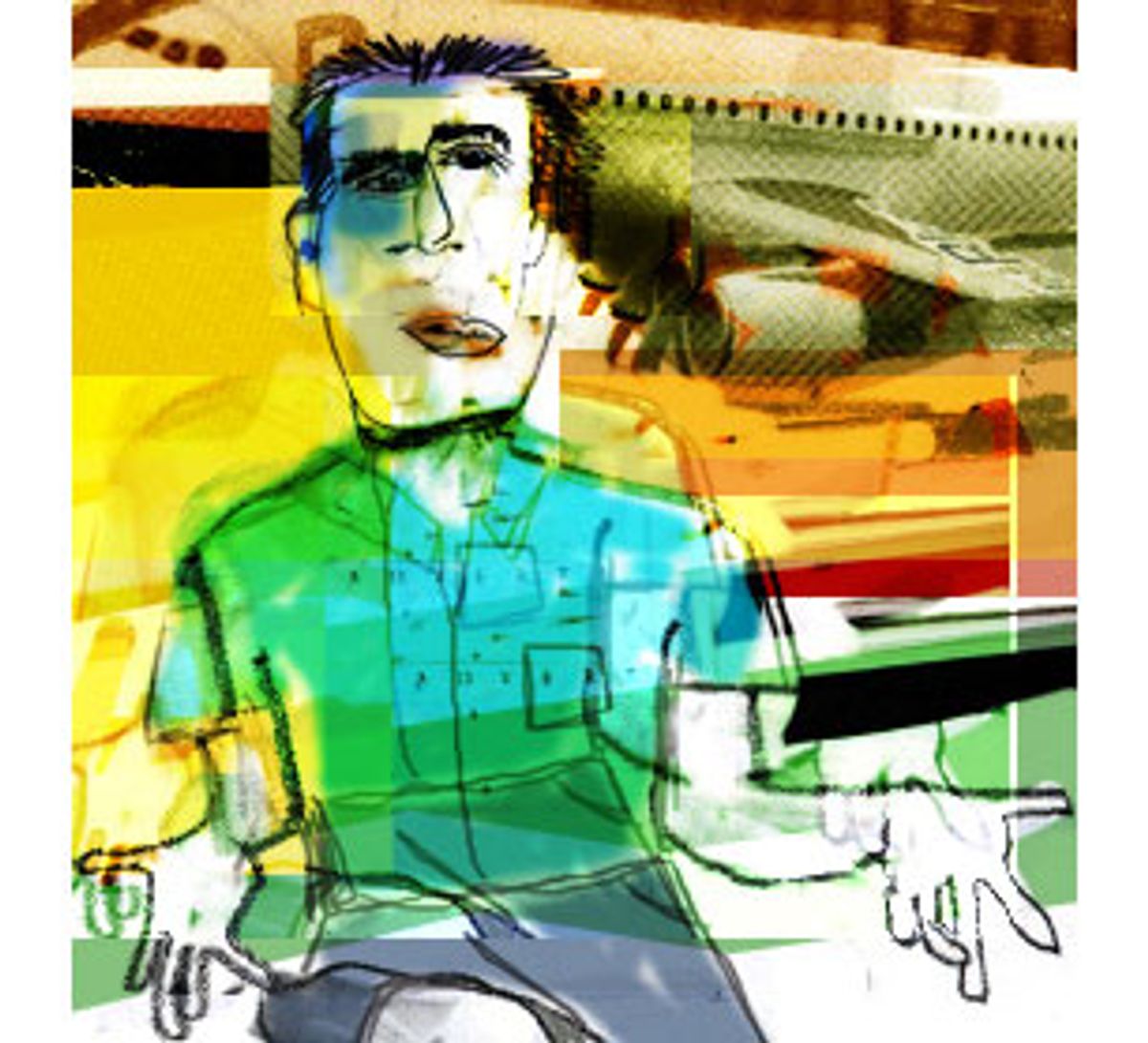 The plane that I hoped would fly me from New York to Los Angeles was crammed with restless passengers. They sat shoulder to shoulder in pre-flight agony, kicking mercilessly against the bag stowed improperly beneath the seat in front of them, battling for sole possession of the armrest, redirecting reading lamps, twisting away at the air vents, tucking books and portable CD players and God knows what else into bulging seat-back pockets that pressed against their knees like inflated air bags in a Volkswagen Beetle. Yeah, I guess you could say the passengers were packed in as tight as proverbial sardines. They were wedged into elfin airplane seats that left them scrunched together, row after identical row, like cigarettes in a pack of Marlboro Lights.

Having been the last person issued a boarding pass by the gate agent, I was hustled onto the aircraft and told to sit in any available main-cabin seat. I slid sideways down the single aisle, scanning the split sea of contorting faces, careful not to whack heads with my shoulder bag, hoping there was an aisle or window seat available, praying, believing -- and ultimately stung with a dose of reality when I finally found the last remaining seat in coach. It was a center seat in the very last row. A seat flanked by two beefy business types who rolled their eyes maliciously when I stopped, cleared my throat and shrugged my shoulders in apology.

Because my carry-on was small, finding space for it in an overhead bin was a cinch. I squeezed into my seat, closed my eyes and began to pray. I prayed not for a safe flight, and not for the strength to withstand a six-hour squeeze between two fleshy bookends. I prayed instead to hear the agent's departure announcement. To hear the distant clamber of the aircraft door being closed and locked. To feel the head-tingling rush of cabin pressurization and the reassuring voice of a flight attendant welcoming us aboard. In other words, I was anxious to pull away from the jet bridge. I was an airline employee traveling on a company pass, and experience had taught me that it's almost never too late to get bumped from a flight.

Each airline has its own non-revenue service-charge policy. Some allow their employees to travel free of charge. Others charge a flat fee. Many impose a nominal service charge based on the number of miles flown. The cost for my one-way trip from New York to L.A., including taxes? Fifteen dollars and change. From the United States to Europe? About $50 each way. Asia? A few dollars more. Adding more sugar to an already sweetened pot, more than 100 airline companies participate in an interline agreement that allows employees from one airline to travel on another airline's planes at a spectacular discount. Depending on the airlines involved, payment is either 10 percent or 20 percent of the highest unrestricted airfare. We travel on perpetual standby, hoping for an empty airplane seat.

The irony, of course, is that the starting salary for flight attendants (the one airline employee group with a work schedule flexible enough to take full advantage of airline industry travel benefits) is so low that we can't do much at a non-rev destination until after six or seven years on the job. It's true. A few years back a group of New York-based flight attendants made the front page of the New York Times after applying for, and receiving, food stamps. The carrot dangling in front of an aspiring flight attendant is not wrapped in money. Rather, it is dipped in the elixir of free travel -- a perk I was so desperately trying to taste on my ill-fated flight from New York to L.A.

During the final stage of boarding, especially on full flights like the one I had just entered, non-revs huddle around the departure desk, waiting like anxious game-show contestants to hear our name called over the intercom. "Peterson ... Morisette ... Jankovic ..." Jankovic? We shoot daggers at the Jankovic who was just issued a boarding pass, feeling certain that we checked in before her, feeling lied to, cheated. We wonder if she is the agent's cousin. Most of the time, this is not the case. Most of the time the process flows smoothly if not fairly. But occasionally things do go wrong. Mistakes are made. And who are we to complain? It's not like an employee can puff up his or her chest and threaten to take the business elsewhere.

Once, while attempting to board a flight to Chicago, I was left standing at the gate by an overworked agent who forgot to process my boarding pass. Another time I was told that the plane was completely full, though when I checked the computer I found plenty of available seats. I've been bumped from flights at the last minute, I've been given a seat assignment only to have it taken away a moment later and, believe it or not, I was once prohibited from boarding an aircraft because the agent decided I didn't live up to company dress-code standards.

I've been stuck for days on end in foreign countries and asked by flight attendants to exchange seats with a full-fare passenger overwhelmed by the "foul stench" of her seatmate. And most recently, on a full flight from New York to Miami, I rode a flight attendant jump seat (the "ironing-board" collapsible that folds out and into the aisle of a 727), dressed in civilian clothes that drew curious stares from fellow passengers. "Are you traveling on a super-discount fare?" the passenger sitting next to me asked tongue in cheek. I simply nodded and smiled at his sagacity. I was traveling on a super-discount fare of sorts, a non-revenue fare that required me to hop out of the ironing-board jump seat -- thus unblocking the single aisle -- as soon as the plane reached cruising altitude, and to spend the next two-and-a-half hours standing between the aft lavatories, flipping through a copy of Field & Stream while trying to stay out of everybody's way.

It may sound as if I'm complaining, but I assure you I am not. The ability to fly for next to nothing is the reason I took this job. It's the reason most airline employees signed their name on the dotted line. Inconvenience is the first law of the non-revenue jungle. We all know the drill. We accept it. We embrace it like a problem child. Usually, uncertainty and inconvenience are a small price to pay for not having to pay, but sometimes, fed up with such wing-and-a-prayer travel arrangements, airline employees do choose to buy full-fare tickets. Not me, though. No sir. I'm a non-revving maniac. I'm also incredibly cheap.

So there I was, sitting in the center seat in the last row aboard the flight to L.A., knowing from experience that it ain't over till the fat lady sings -- or at least not until the captain releases the parking brake. The flight attendants had closed all the overhead bins. The passengers were finally settled in their seats. I looked at my watch. It was four minutes before departure. Still enough time left for me to get yanked.

I knew I was in trouble the moment the gate agent lurched into the cabin. Even from where I was sitting I could see her intent: The bushy head pivoting on its axis as if operated by hydraulics, the eyes scanning the cabin with the intensity of twin search beams. Robo Agent. Terminator III.

She marched down the aisle, sweeping the wide expanse of faces, causing cardiac arrest in every non-rev passenger along the way. Her movements were sharp, crisp, efficient. An army general would have been damn proud. Her head swiveled relentlessly, looking, looking, until the search beams stopped suddenly and decisively upon me.

I was caught. Busted. I shook in my shorts. My seatmates had had me hemmed in with heavy arms and thighs. But now they leaned away, far away, staring at me with disbelieving eyes, as if I'd been mysteriously coated in lavatory scum.

"Grab your belongings and come with me," the agent said. She spoke in harsh, guttural Brooklynese, the voice of too many cigarettes and too many kids. The voice of Yogi Berra's mother after a long day at the ballpark. I followed orders and threaded my way up the aisle. I was Sean Penn shuffling toward the execution chamber in "Dead Man Walking." Bill Buckner slouching off the field after his infamous World Series error. Everyone on the aircraft was staring, whispering, no doubt wondering how I could have done whatever it was that necessitated my removal from the aircraft. I might as well have been led off the airplane in leg irons and handcuffs.

When we reached the aircraft door and stepped onto the jet bridge, the agent looked into my eyes and shrugged her shoulders. As it turned out, there had been a mix-up. There was, in fact, a non-revenue passenger who had checked in before me and with a higher priority. He was traveling on company business, apparently.

"Sorry," she said, with all the grace and sincerity of a tow-truck driver hauling away an illegally parked car. My replacement scooted past me and disappeared inside the airplane. Though I secretly hoped he would spend the next six hours being squished to death by my old seatmates, though I felt cheated and embarrassed and just a tad bit out of sorts, I smiled at the agent and said, "Thanks, anyway," because that's how non-revs are supposed to behave. No argument. No protest. Just the humble acceptance of our frequent-flying fate.

I slunk down the jet bridge and stood in front of the unoccupied departure desk, waiting for the agent to return so she could roll my name over to the next L.A. flight. But wait a minute! There were no more flights to L.A. that day. The next flight departed sometime the following morning. Dejected, I left the terminal and waited outside for the bus that would take me back to 42nd Street. From there I caught the subway to Union Square, pounded the pavement to Sixth Street and Second Avenue, then climbed five flights of stairs to my coffin-size apartment, where I doused my travel woes with an ice-cold Amstel Light.

"Screw L.A.," I said out loud, after watching the national weather forecast on television later that evening. Southern California was being pounded by torrential rain. There were mudslides. Floods. Talk of voluntary evacuation in low-lying areas.

The next day I flew to Barbados.