Chinese leaders say no to a proposal for peace talks as equals. 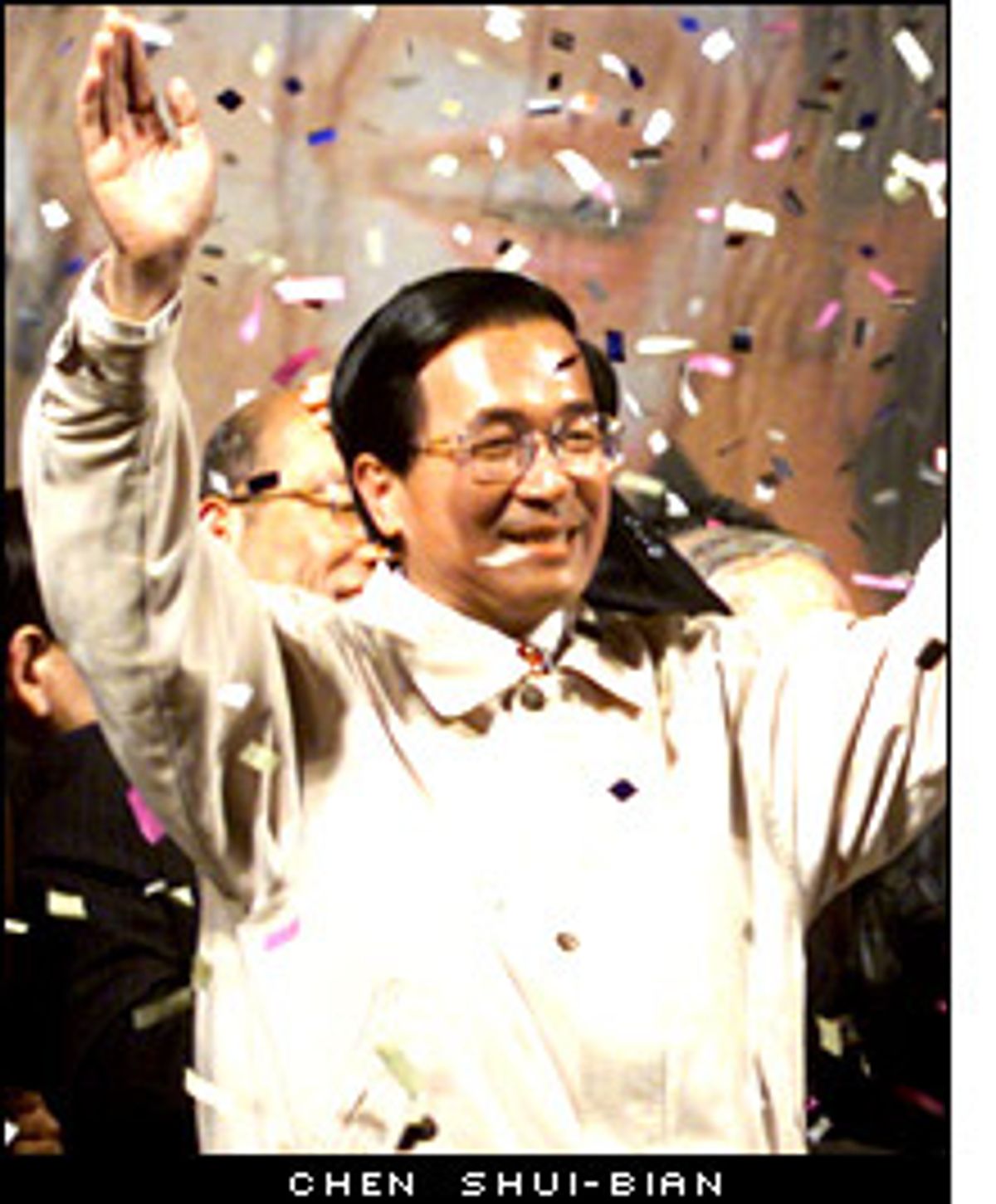 A proposal by Taiwan's president-elect, Chen Shui-bian, for a peace summit with China seemed to run aground Monday despite toned-down rhetoric from both sides. Beijing is insistent that Chen accept its "one-China principle" before talks can begin; Chen, a native Taiwanese and the candidate most hated by the mainland, has long championed the island's independence. His election Saturday came after weeks of bullying and threats from China.

The most immediate threat to peace in Taiwan was the reaction of Nationalist Party members, who rioted to protest President Lee Teng-hui's failure to hold on to the presidency. A crowd of about 3,000 stormed the party headquarters in Taipei chanting "Step down president!" And indeed Lee promised to resign as party leader.

Chen's supporters were exuberant after his unexpected victory. At a rally Saturday, deputy campaign manager Lee Yi-yang took the stage and taunted China. "The Taiwanese people have stood up," he shouted. "The Taiwanese are taking back Taiwan." Lee's words, a play on the famous 'Chinese people have stood up' speech made by Mao Zedong after the Communists won the civil war, are a direct challenge to Beijing.

But if Lee can afford to taunt China -- he was addressing a crowd of faithful supporters -- president-elect Chen cannot. During the campaign, Chen toned down his rhetoric and stopped demanding a referendum on independence. In his victory address, he called repeatedly for peace, dialogue and talks between the two countries.

Still, it is clear where Chen's sentiments lie. "We are unable to accept one country, two systems, or any such system," he said at his post-election press conference. "We will not become a second Hong Kong or Macau."

In Taiwan's first-ever presidential election in 1996, China tried to influence the vote by firing missiles near Taiwan's two main ports. The tactic backfired then, as Taiwan elected the candidate most disliked by Beijing, and now once again, the small island has defied its huge neighbor.

In the weeks preceding the election, China had escalated its threats against Taiwan, culminating in Prime Minister Zhu Rongji's warning that China would shed blood to retake Taiwan, which it considers a renegade province.

Chen's victory appears to have taken the United States by surprise -- he trailed in the polls for much of the campaign -- but the American Institute in Taiwan, the de facto U.S. Embassy, expressed cautious optimism. "Chen's response to the threats from Zhu Rongji was very low-key," said a senior U.S. official. "He has consistently downplayed all the threats, and we hope he will continue to do so."

During the campaign, the ruling Nationalist Party warned of dire consequences if Chen were elected, including Chinese missiles falling in central Taiwan and the stock market dropping almost to zero. Now they must hope their predictions don't come true. Taipei's stock market index dropped 2.5 percent Monday, a sign that some investors are worried about the escalation in tension.

Few people here underestimate China's desire to take back Taiwan. China is a nationalistic nation with a huge chip on its shoulder. It sees its present status in the world -- a large, poor country with modest global clout -- as a historical aberration. Taiwan's very existence as a separate country -- let alone an economic powerhouse and a bastion of democracy -- is an ongoing humiliation to the mainland.

Chen's Democratic Progressive Party (DPP) is unlikely to throw a match into the tinderbox, at least not on purpose. There is little to fear from the personalities in the party, who have matured considerably since the party was founded in 1986. In the years following its inception, the DPP was a firebrand opposition party, but as it gathered support among the people and in the local and national government, it softened its rhetoric.

When DPP leaders gathered for Chen's post-victory press conference, the mood was serious and sober, and when party Chairman Lin I-hsiung addressed the media, he was calm and conciliatory.

Still, the party's written platforms are sure to enrage China. In its China Policy White Paper, issued in November, the DPP declares that Taiwan is a sovereign and independent country, and not a part of China in any way. It further states that any change in relations between the two countries must have the consent of the people of Taiwan. It is a declaration of de facto independence.

Chen has distanced himself from the party platform, saying discussions are possible under any framework, but he adds two key caveats: Any changes to the status quo must be approved by the people of Taiwan, and Taiwan must be treated as an equal. But China has never regarded Taiwan's government as legitimate, let alone equal, and thus the relationship begins in mutual suspicion.

On Monday, Chinese President Jiang Zemin dismissed the suggestion that the two governments are equal, and said that "negotiations across the Taiwan Strait should have a basis, namely, the one-China principle must first be recognized."

Taiwan's next move depends on China, said DPP legislator Shen Fu-hsiung. If China wants to talk, Taiwan will talk, but continued belligerence would force Taiwan to strengthen military alliances with Japan and the United States. "We are a small country between three giant neighbors," he said. "To survive, we must use wisdom. We can either establish formal alliances with Japan and the U.S., or we can talk peace. We can either contain China, or push forward with diplomacy. But diplomacy must come from an attitude of peace on the part of China."

In the first flush of victory, Chen supporters scoffed at the threats from China. As Lee taunted the mainland from the stage, the crowd took up the cause. "Just say no to China," shouted one supporter, locking me in an embrace. Another, overseas Chinese Albert Shaw, said nothing will spoil his happiness, especially not China. "For 54 years I've been waiting for this day," said Shaw. "There is nothing China can do."

By the next morning the euphoria was gone, and the reality had set in: Taiwan has elected an independence-minded president and waved a red flag in front of a powerful enemy. Even so, on the streets of Taipei, China is not much talked about, and daily life remains the same regardless of the state of tensions. The situation resembles the United States during the Cold War: the presence of a vague threat that does little to dampen the good times and prosperity.

Are the people of Taiwan worried that China will make good on its threats? "Obviously not, or they wouldn't have elected our candidate," said the DPP's Hsiao. "Chen's promises in the final days of the campaign reassured them."

Charles Chen, a middle manager at a company that deals regularly with the mainland, is also not worried. "There is nothing China can do that they haven't done already," he said. "They've already fired missiles off the coast of Taiwan. They've already threatened us. What more can they do?"

China and Taiwan have a tangled history. A neglected province under the Ching Dynasty, Taiwan was ceded to Japan in 1895, and returned to China in 1945, when the Nationalists took over after losing the civil war to the Chinese Communists. A period of harsh repression followed as the Nationalists subdued the native Taiwanese, whose ancestors had arrived a few centuries ago from Fujian province, on the southeastern coast of China.

The second step in forming a Taiwanese identity came in 1987, when the Taiwanese were first allowed to travel to China. They visited by the millions, and what they saw on the mainland shocked them: grinding poverty, harsh repression and systemic corruption. It was not what they had expected and it was much different from their lives in Taiwan.

The cross-strait relationship was not the only issue in the campaign, of course. Chen's platform -- against corruption, in favor of reform and in favor of ending 54 years of Nationalist Party rule -- appealed to many voters. And his personality helped: The people see Chen as one of their own, a native Taiwanese from a poor family who rose to prominence.

But China is the wild card in the relationship. Its initial reaction was to restate its former position: China is one country, Taiwan is part of that country and we will retake Taiwan by force, if necessary. A belligerent, unpredictable power, China appears capable of drastic action.

"Along with Israel and Palestine, and India and Pakistan, I have always said that Taiwan and China is one of the world's most intractable issues," said Chen Pi-chao, former national security advisor to President Lee Teng-hui, who has joined Chen's staff. "There is no one-shot quick solution."

Brent Hannon is a writer who lives in Taiwan.