My tummy is a misshapen battlefield, but I'm not ready to tuck it away. 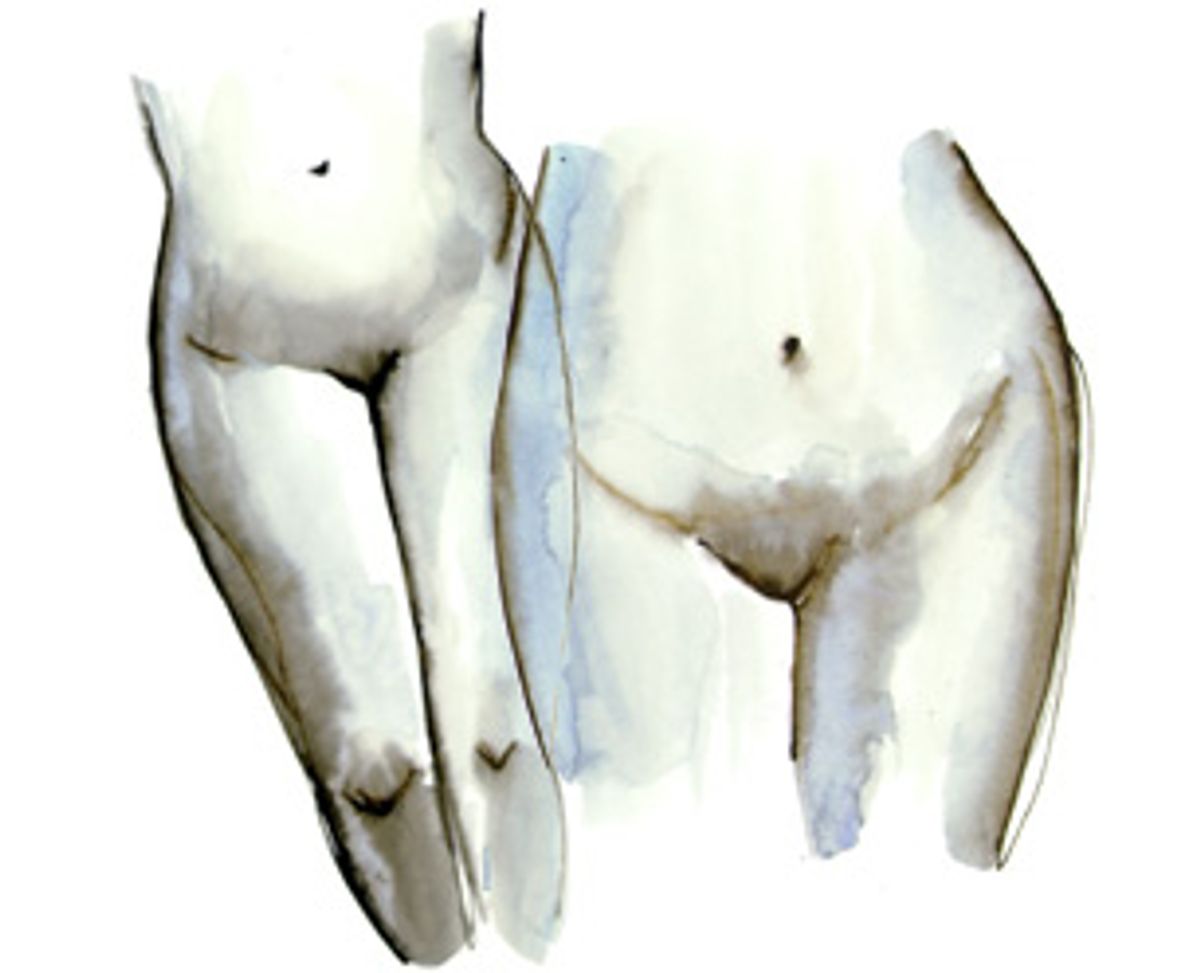 I always believed in self-improvement.

At 17, I had my hook nose bobbed. In my 30s, I colored away all my gray. I've always done the sit-ups I loathe just so my belly could hold its own in a skintight dress. I scrupulously covered what I couldn't correct -- makeup over dark circles, long sleeves over ungainly arms, long pants or skirts over bowed legs. I had all my beauty bases covered.

And then, three years ago, three days after giving birth, I became critically ill from a rare blood disease, and for over a year, my whole appearance changed in a way I could do nothing about, a way I can only describe as horrifying. My hair fell out in clumps. My skin turned gray. Steroids puffed me from swizzle-straw thinness into near obesity.

Five emergency operations gave my belly a weird new geography; it formed a hard triangle on one side and cleaved down the center, and my bellybutton moved far right.

It took me more than a year to get back to normal -- or as normal as I'm going to get. I'm thin again, my hair is back, my skin is rosy. Only my belly remains, still so misshapen I've given up form-fitting clothes, still so large that sometimes on the subway, people smile and ask pleasantly, "What do you want, a boy or girl?" The doctors tell me I can have a tuck done and fix this last vestige of my illness. But I, Ms. Physical Insecurity, the onetime queen of self-improvement, now choose, deliberately, defiantly, to keep it.

Before I got sick, I had a lot of ideas about what body perfection meant. I wasn't going to let myself go as a new mother. I was going to exercise myself back into my form-fitting clothes, keep my hair long, wear makeup.

But the reality was different.

Sick, I could hardly get out of bed, let alone wear sexy dresses, and even if I could, because of my new odd shape, I couldn't fit into them. "Oh, that's the meds," my hematologist told me. "But it goes away eventually."

Eventually, I told myself. But I kept increasing, going up one size, then two. My eyes began disappearing into pin dots in my fleshy face. My chin doubled and then moved into triplicate. And then, as I bent over my son to tickle him, a long, thick, fistful of hair slid down my shoulder and onto my baby and I burst into terrified tears.

In a desperate act of self-preservation, I began to avoid mirrors, to hide in the house. When people called, wanting to visit, I feigned exhaustion. When people dropped by, I pretended to be asleep, the covers over my head. The only place I would go was to our thrice-weekly visits to doctors and to a friend's deserted house in the country, and even then I stayed inside.

Jeff, my husband, put his arms around me. "You know I think you are beautiful," he said quietly.

"That's just because you love me," I said hopelessly. He sighed, shaking his head.

I probably would have stayed inside for the duration of my illness, but our bills began to pile up. Our insurance company began balking, refusing payments, and disability refused to cover my staying home anymore. Jeff's job as a freelance writer wouldn't begin to cover our mounting expenses. To my horror, I had to go back to work, and even worse, it was in style-conscious Manhattan.

When I was well, I used to go to work in form-following suits, in tight '50s sweaters and little skirts. I wore my hair in a long riot of waves. I accentuated my pale skin with only a little red lipstick and a lot of black mascara.

I called some of my co-workers to prepare them for my altered appearance, to make it easier for myself. "Listen, I look really different," I stammered. "Really terrible." People laughed. "Come on. We can't wait to see you!"

I bought a new dress for my first day back at work. It billowed to my ankles, a size large where I usually took a small. My hair was gray, too fragile, too sparse, to color, and the few strands I had left, I had tucked into a small tail in back. I put on some blush, some lipstick, some mascara. I can do this, I told myself.

On the subway, two thin women in black Lycra looked at me and whispered to each other. A little girl frankly stared. And a man, a concerned look on his face, stood up and helped me into his seat. When I got to my office, everyone seemed to be crowded around my desk. They blinked at me. "You look great!" one woman blurted overenthusiastically. People hugged me, they had presents, but I saw how every once in a while, someone averted her eyes, a tiny gesture that struck me like a slap.

My favorite story -- now, not then -- is about the time I had to pick up a freelance-writing job at another company, known for its line of sexy lingerie. I had worked for the account executive before, a thin, stylish woman with a waterfall of blond hair, who told me she had months of work for me.

"Don't warn her about your looks," Jeff pleaded. "You have to give people a chance. And anyway, it's her problem if she reacts, not yours." So I didn't tell the woman about my changed appearance, but when I walked into her office, she flinched, and then quickly composed herself. She was perfectly pleasant, but she never gave me work again.

Daily, I lost more and more hair. I kept swelling. I called wig places. I begged my doctors to make me look normal again. "Hair grows back," the doctor told me. "Your belly can be surgically fixed. But not until you're off your meds and well."

"When am I going to look normal?" I cried to my husband. "Everyone is looking at me."

"Screw them," Jeff said. "You're alive. The baby and I love you. Who cares?" He began gathering things from around the house. "Come on," he said. "We're all going out."

But he shook his head, adamant. "We're going," he insisted.

It was a beautiful spring day and we went into the city. We pushed the baby in the stroller, and after a while, I was having too good a time to notice whether anyone was staring. I felt happy.

It still wasn't easy for me, but I felt as if I had turned a corner. I began venturing out, more and more, and each time felt as if I were immunizing myself against shame. And then, a week later, when I was carefully arranging what hair I had left, I felt something poking through. A new silky tuft. I stared delightedly at myself in the mirror, and I suddenly noticed the contours of my face again. A peach tone in my gray skin.

And then, one sweltering day when we were out, when I was in my usual long sleeves, and long pants, I suddenly couldn't stand how hot I felt. I knew I still looked terrible, so what did it matter if I looked even more terrible if I bared my bowed legs, my gangly arms? Looking genuinely off-kilter made all my imagined body slights seem, well, ridiculous and petty.

I veered into a store and bought a sleeveless minidress to wear. I walked out wearing the dress, ridiculously triumphant, as if I had scaled a great height. "Look at you!" Jeff said, slinging an arm around my shoulders. All that summer I wore that dress. It was cool, comfortable, maybe even symbolic. Every time I even touched it, I felt good.

In all, it took me about a year to recover. My hair, thicker and glossier, shot down to my shoulders again. My skin turned luminous. Only my belly, disfigured, puffed out as in pregnancy, remained. "You can get that fixed now, if you want," the doctors told me. It was what I had been waiting to hear, what had kept me going for nearly a year, and now, I realized to my great surprise, I no longer wanted to. It no longer seemed to matter.

It has now been more than three years since I got sick. I look normal. People don't stare at me anymore, unless it's an occasional man who wants to flirt. Even my belly has gone down enough so that the only thing someone might think is: "Boy, she needs to do sit-ups."

And I have come to love my belly. For me, my belly is almost a badge of honor, my very own purple heart proving I've been through the wars and come out victorious, reminding me how silly worrying about blotchy skin or graceless arms is in the face of having something really wrong with your body.

It's a reminder to me, too, about what appearance really is -- not something to be taken too seriously. Who cares, my husband had said, and he was and is right. Love my belly, love me. I've come to love both. And I keep the big-shirt companies in business.