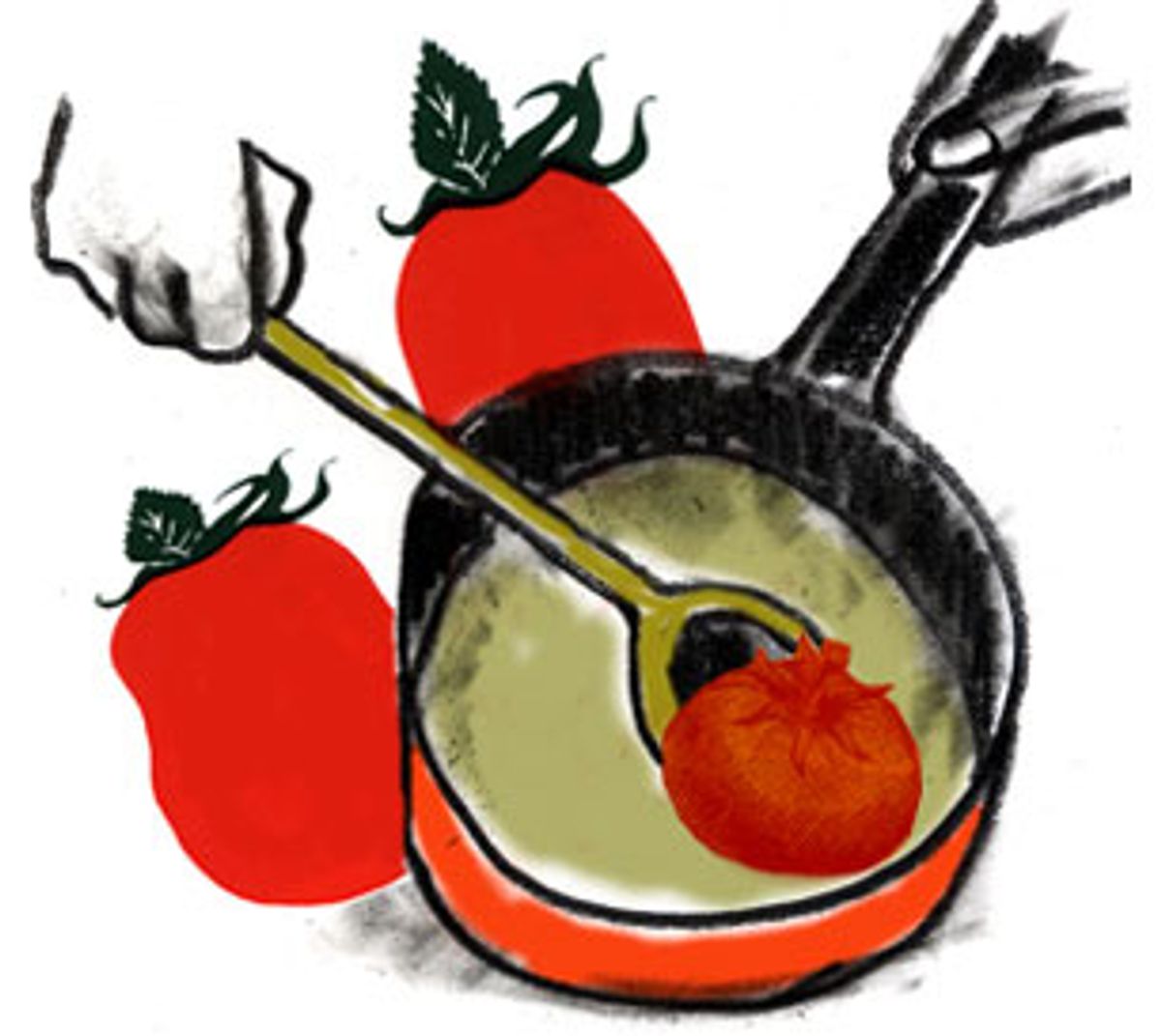 I was in the Aeolian Islands, the rugged
volcanic archipelago north of Sicily,
when I met a couple of friendly Southern
Italian guys on the aliscafo, the boat
that goes from island to island. Fabio
was a blond jazz musician in a Panama
hat, and Pasquale was a chubby,
olive-complexioned, true
speaking-with-his-hands native. They
introduced themselves, piacere, a
pleasure, shook my hand, and Pasquale
insisted right away that since my name,
Laura, is an Italian name, and Im
hardly Italian, he would call me Molly
instead.

When we disembarked at Stromboli -- an
island famous for its ever-erupting
volcano -- it was lunchtime, and since
there is nothing to do in Italy at lunchtime but eat lunch, I decided to eat
with these guys.

Pasquale said he'd already found out
which was the best restaurant in town,
the pizzeria, Da Luciano, just up the
street from the port. Pasquale and Fabio
greeted the crusty owner effusively, and
asked him where he was from. Luciano
said Napoli, and Pasquale practically
embraced him. "We're Southern Italians,
from Puglia," said Fabio. "We'll feel
right at home."

They made their way to a table on the
terrace as if they owned the place. I
was glad to be sitting with them, and
not with the long table of Germans next
to us. I figured I'd have a better meal.

"Molly," said Pasquale. "Don't act so
German. You need to relax for a day or
two before you can even think about
climbing a volcano." I spread my arms in
a helpless gesture and ordered a salad,
and then a plate of the pasta
Stromboliana, homemade tagliatelle with
roasted eggplant, capers and fresh
ricotta.

When the waitress arrived with steaming
plates of creamy, fragrant pasta, I
inhaled the earthy aromas of the
eggplant, ricotta and capers. "This
looks delicious," I said, pouring
everyone another glass of wine.

"Of course," said Pasquale, already into
his third or fourth bite. "Especially
compared with what you eat in America."

I told him it's true, you can't just
walk into any old restaurant in the
United States and get a good meal the
way you can in Italy, but you can still
eat pretty well if you know where to
look. It's more of an art in the United
States, I said.

My hometown, San Francisco, has great
food, I went on. In New York, they've
turned food into architecture, trying to
make it as tall as possible and
dribbling colorful sauces all over the
plates, but they think nothing of the
taste. In San Francisco, though, we have
good produce, the best ingredients, and
we have Italians, Vietnamese,
Cambodians, Salvadorans, nouvelle
cuisine -- it never ends. If you come
visit sometime, I told them, you'll see.

"No," said Pasquale, lifting his head up
from his plate. "The food in America is
terrible." He sliced a flat line in the
air with his hand, discouraging any
argument. "This I know for a fact."

I said that there are probably almost as
many Italians in the United States as
there are in Italy, so how bad could it
really be?

Fabio stared into my eyes with his
sleepy blue ones. He said one word,
slowly. "Mc-Don-ald's."

Pasquale considered that, and waved his
fork at Fabio. "The french fries," he
said, making a generous, accommodating
gesture towards me, "aren't so bad." He
mopped up his remaining pasta sauce with
a corner of crusty bread. "The one thing
I'd really like to eat in America," he
said, a dreamy look on his face, "is a
hot dog from New York City with
everything on it." He was clearly
willing to spend 16 hours on a plane
just for that hot dog. Then his gaze
came back into focus. "But pasta?" he
said. "Beh! You don't have any pasta."

Most Americans I know eat pasta, I told
him, about four times a week. Everyone
eats pasta all the time. Pasta is the
only thing your average American male
knows how to prepare on his own. It used
to be pancakes and scrambled eggs and
maybe grilled burgers, but these days
guys mainly make pasta. I didn't go into
the details of what they put on the
pasta, though.

Pasquale was not fooled. Maybe Americans
eat pasta, he said, but they don't eat
it with real sauce. "You eat pasta with
ketchup on it." He leaned back, gleeful
at having coming up with the perfect
characterization of what Americans eat.
He nudged Fabio. "Right?"

Fabio nodded slowly. "Could be."

Pasquale launched into a long tale about
being invited to dinner at a vacation
house in Northern Italy after skiing one
day, and when the English hostess
finally brought a big dish of pasta to
the table, it had absolutely no sauce on
it at all. "Completely naked!" said
Fabio, who likes telling a good story.
When he asked the English signora where
the sauce was, she got up and brought
back a bottle of ketchup. "Ketchup!"
Pasquale was now nearly roaring. "Can
you imagine?" He calmed down a little.
"How hard can it be," he gestured around
the table, "just to bring in a little
butter, maybe parmigiano, some salt and
pepper? How hard can that be?"

"It's good that way, with just a little
parmigiano and butter," Fabio agreed.

The woman he had dinner with, I told
him, was English, not American. For the
sake of argument, I will go along with
the fact that the English have atrocious
eating habits, I said, and in America,
OK, sometimes people will take pasta
sauce from a can, but they will never
use just ketchup. "Well, probably
never," I added. "Maybe some people. It
is a big country. But truly, truly, that
is exaggerated."

"Molly," said Fabio, "how do you make a
tomato sauce?"

Pasquale was delighted: a test!

I paused to consider. All of a sudden I
had absolutely no idea how to make
tomato sauce. There are so many
possibilities, but only one was right. I
bought time. "For pasta, or for a
pizza?" I asked.

Pasquale raised his thick eyebrows. "You
don't make pizza at home," he said.

Sometimes I do, I said. It's hard to get
the crust as thin and crispy as I like
it in most restaurants. There's really
only one restaurant in San Francisco, a
tiny Florentine place called Pazzia,
that makes pizza absolutely right. A
couple of other places with wood-burning
ovens do passable pizza, but it really
isn't good at most places; it's too
thick and cheesy, and they put way too
much stuff on top. They even put
broccoli on top, I said. So I make pizza
at home once in a while, putting a big
flat stone in my oven that absorbs
moisture from the pizza dough to make it
crustier. I like simple pizzas, maybe
mozzarella with fresh oregano, maybe a
tomato sauce with some anchovies and
capers, or just tomato and basil, really
that's perfect.

Fabio was impressed. Pasquale was
unmoved.

"The sauce, Tia Molly," he said,
returning to the interrogation.

OK, I said, basic tomato sauce. "You
start with some fresh tomatoes ..."

I nodded and continued: If you aren't
making a raw, pomodori crudi sauce,
which is best when the tomatoes are
good, especially if it's a warm day; if
you aren't, then you drop the tomatoes
in boiling water for a couple of
minutes. After you spoon them out of the
water, you can either run them under
cold water, peel them, squeeze the seeds
out with your fingers and chop them -- I
went through the motions with my hands
-- or you can push them through a ...

I was grasping for the right word in
Italian. "You put them in that metal
thing that goes in a circle that makes
the skin and seeds come off." Fabio
nodded and told me the word for food
mill, which I promptly forgot. I paused
for a sip of wine and continued.

"Meanwhile, you make a soffritto --
chopped onion sautied in olive oil --
and maybe add a few red pepper flakes to
give it a little bite. You can add a
splash of red wine, too, but it's not
necessary. It depends. Maybe if you were
adding meat, you'd add some wine. Then
you add the tomato mixture to the
soffritto, stir it around, cook it until
it reduces a bit, add salt and pepper
and chop up some fresh basil to throw in
at the end."

Pasquale looked up from his swordfish,
chewed vigorously and swallowed. He took
a drink of wine and wiped his mouth with
his sleeve. "You forgot the sugar," he
said, punctuating the air with his
finger, proving he had been right all
along about the ketchup. "You need a
pinch of sugar for the tomatoes!" He
leaned back and adopted an avuncular,
confidential air. "Tomatoes, Molly," he
said, "are slightly acidic."

"Zampa," said Fabio, putting his fork
down. Zampa was Fabio's nickname for
Pasquale, a shortened version of his
last name, which means "paw" -- the part
an Italian dog gestures with to show he
is loyal and trustworthy. "Zampa," he
said, completely calm, "you can add the
sugar or not, depending on the tomatoes.
Some tomatoes don't need sugar."

Pasquale dropped a meaty hand on the
table. "No, you have to have the sugar.
A little bit, but it is absolutely
essential." He gestured to the owner
across the room to come over and join
us. Luciano sat down heavily at the
table, taking a break. Pasquale praised
the food, the view and the island in
general and finally got around to asking
him if his wife adds a pinch of sugar to
the tomato sauce. The owner gave him the
what-the-hell-are-you-talking-about
gesture, fingers pinched together in
front of his chest, then considered it.
"Sometimes," he said, "depending on the
tomatoes."

Fabio was elated. He ordered espresso
and I thought: "Well, maybe I'll wait
until tomorrow to climb that volcano
after all."