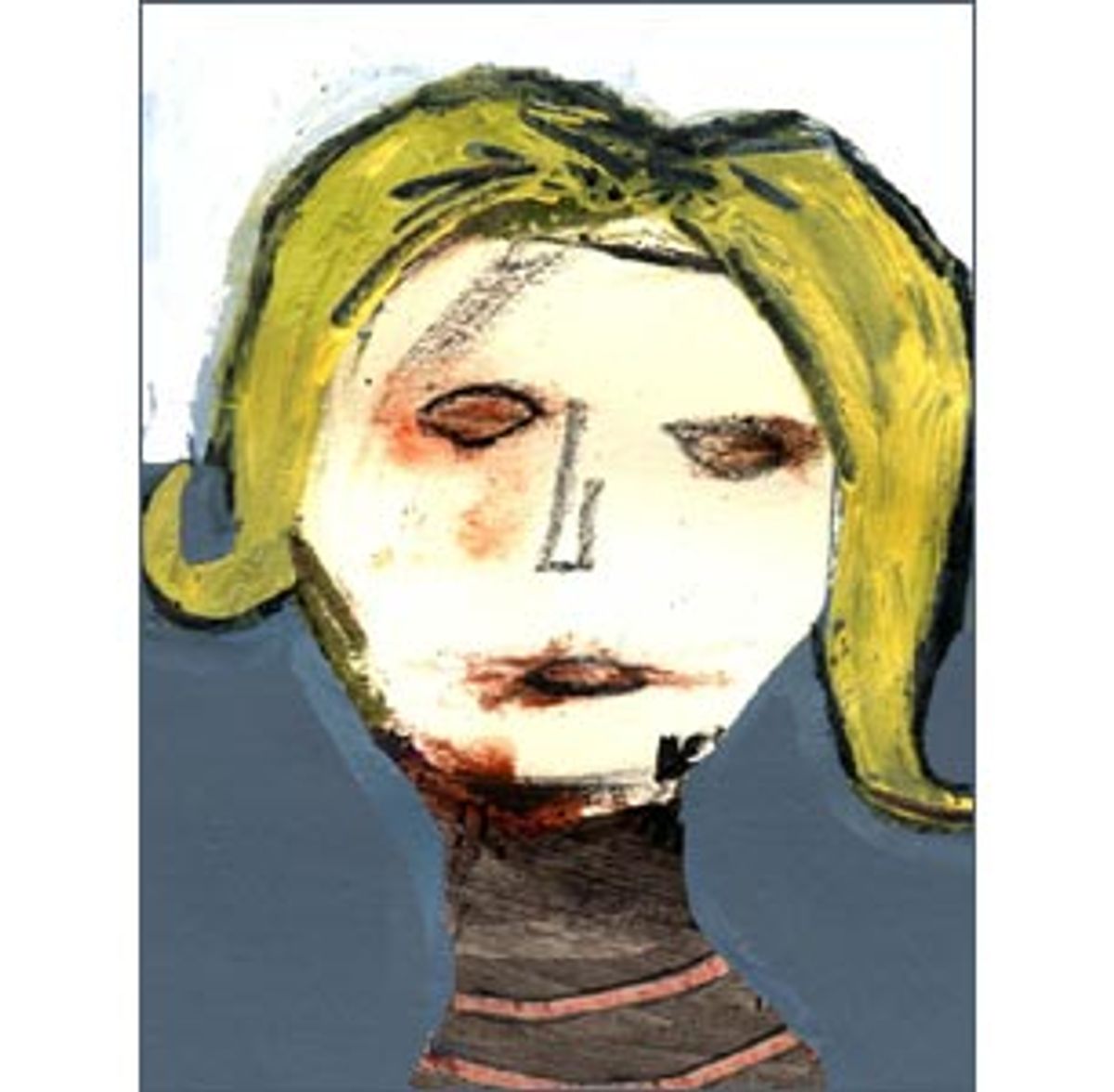 "Why do women teach the rules and strictures of father culture?" Natalia Ilyin asks in her first book, "Blonde Like Me." Unfortunately, this perceptive question comes after several chapters in which the author has done just that, relentlessly. "Blonde Like Me" looked promising: The subtitle is "The Roots of the Blonde Myth in Our Culture," and Ilyin, according to the jacket, has taught "American mythic images" at Yale and Cooper Union. But alas, rather than illuminate the blond myth, analyze its history, perhaps examine statistics on the use of blond hair dye or the percentage of blond leads in films, Ilyin has produced a half-baked paean to a hair color. It's part memoir and part soft cultural criticism, but successful as neither.

"Blonde Like Me" is almost purely descriptive, dividing blonds into types -- Innocent, Moon and Sun are Ilyin's major divisions -- and offering glimpses of the author's past through the lens of the blonds she has known and been. There is nothing wrong with organizing things this way, but the book is disappointingly bland as narrative and disappointingly shallow as analysis.

Is a woman's "deepest desire for herself" really revealed by her choice of hair color? Ilyin's assumptions about women and the world are both narrow and conventional:

The Innocent Blonde inside every woman wants to kick over the traces every now and again. There are moments when we all get the urge to abandon the four-by-four by the side of the road, dump the kids off at the sitter's for fifteen years, pay off the mortgage with a flick of the pen, and make tracks for Aruba. But we can't, so we buy a box of hair color.

Oh yeah? There's an "innocent" blond inside all of us, including Asians, Africans and we brunets who have never had the slightest interest in being blond? And many of us never pick up the "traces," or we do kick them over, and not with a box of hair color. Who is teaching father culture here?

On the last page of her book, Ilyin writes that women choose to be blonds because "they want to live heroic lives," which may be so. A book examining the distance between actually heroic lives and lives centered on hair color choices would be a useful thing. But a book that assumes that there is something heroic about having a particular hair color is another matter. Don't women, at least, know that questions of appearance have their place, but scarcely represent the deepest truths of our lives?

But what moves the book from the realm of the flawed to that of the truly annoying is the cloying tone Ilyin uses to tell her life story. Throughout "Blonde Like Me," her dumbed-down stance, the effort to pretend that she's really a regular gal, not an intellectual, grates. Why should a highly intelligent university professor feel obliged to coo on the first page of her book, "Tired of working, I decided to go to a very ritzy grad school to learn about signs and symbols and what they meant"? Or, later, mock her own work in progress on advertising imagery? Why does she feel the need to convince us that she's insecure about her looks and weight, just like the presumed chummy (female) reader? (And what does the male reader make of all that?) It's sad indeed if she thinks "we" won't like her if she's smart, and it's foolish of her, as a writer, to cut her coat accordingly. Does she want her obit to mention that she was blond or that she was a semiotician?

Ilyin is a polished and graceful stylist, and she provides enough historical anecdotes and pop-culture tidbits to show that she could undoubtedly have written a good and enduring book on the symbolic status of the blond. But she hasn't. There is no more in the way of argument or interpretation than you might find in Vogue. Only stray aphorisms and asides suggest the blonds book we might have had: "Real people are not whole" ... "The words of the goddess that want to come out of your mouth often get tangled in your hair."

Inside "Blonde Like Me" are at least two more interesting books struggling to emerge. One is about being a very tall female: Ilyin claims that the male attention she gets comes from her being blond, but it's likely that being a 6-foot-2 woman attracts even more notice than her hair color does. The other is about growing up in a diplomatic household with a White Russian father. The scenes of her family life are quietly delightful, although they are drawn with little depth. Family members get their one- or two-line descriptions, and you have to wonder about someone who would dismiss her sister thus: "Nadia works at a computer company, sees friends, has beaus, and kicks over the traces every once in a while by having pizza at her favorite dive. Add to this a lovely Victorian apartment and convenient storage unit, and you pretty much have Nadia."

Several chapters of "Blonde Like Me" are memoir material only tangentially related to the book's premise ("The Semi-Dior Pivot" about how her mother sent her to modeling school to give her confidence once she hit 6-2 at 13, and "I, Defiler," in which she describes a bizarre incident at an Orthodox church service). They suggest the contours of one of the hidden books in this one, but add nothing to its content as a book about blonds. It's as though Ilyin wanted to write a memoir, but got a contract for a book on blonds, and tried to make the best of it.

The tone of "Blonde Like Me" is women's-magazine cozy and bland. Ilyin seems to be trying to be Helen Gurley Brown, but why not go for the real thing? There is more reality, guts and vigor in two pages of 78-year-old Brown's recent autobiography, "I'm Wild Again," than in Ilyin's whole book -- and you can bet that if Brown had a graduate degree she wouldn't go around ashamed of it. I'd never read any of the magazine publishing doyen's seven previous books and even as an adolescent found Cosmopolitan too embarrassing to pick up. I couldn't imagine wanting to wear the horrible clothes on the cover girl, and then there was the big hair. (It was, I knew even then, a class thing: Cosmo was for secretaries, not professionals.) I assumed Brown was one of those sickly sweet, girly writers who teach father culture -- that is, who teach females how to be women -- powerless, decorative, boring.

I was wrong. "I'm Wild Again" is a loosely threaded web of memoir, advice and observation, but it feels like a cohesive whole because of the strong personality of its author. Brown -- Arkansas born, no college degree, 17 secretarial jobs before she wrote "Sex and the Single Girl" -- is fascinating even pushing 80. To give you an idea of her energy level, she still exercises twice a day, and after a bout with breast cancer, she has begun working on her posture. Self-confident enough to reveal both her flaws and her strengths -- to be, in short, a real person -- she is a far better role model than the tacky covers of Cosmo under her editorship suggested.

For one thing, Brown is as forthright as, well, a man in her comfort with her power and success. (New Yorkers: Read her description of her four-story Central Park West pad, once Mike Nichols', and weep.) For another, she gets straight to the point on all subjects, and like Freud, she thinks love and work are the important ones. The meaty, smart sections of career counsel to young women have the authority of someone who has wielded real power, which is by no means the usual case for women writing advice for women. Brown puts her finger on what I suspect is the real reason for the persistence of the male-female earnings gap, and the relatively small number of women in top positions in the business world, with one of her precepts: "As you climb, don't be afraid success will defeminize you." Advice Ilyin should take for her next book, which might then reflect the abilities she blunts in "Blonde Like Me."