Are the ends supposed to justify the means? Or is it the other way around? 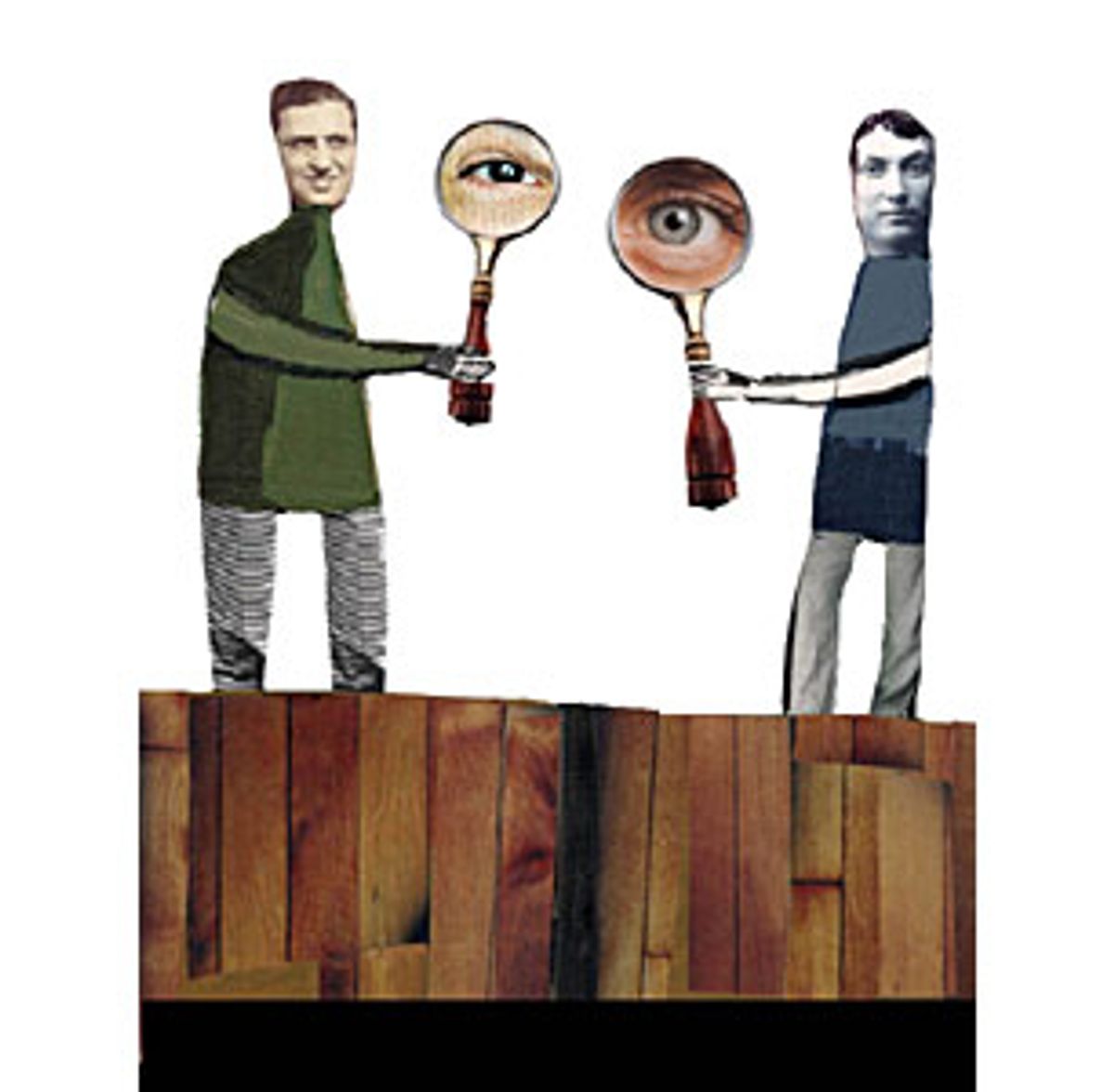 Mystery writers can be divided into two
types: those you read for the journey --
the classic example is Raymond Chandler
-- and those you read for the
destination, like Agatha Christie. The atmosphere
of a Chandler is its raison d'jtre, just
as the solution is a Christie's. This is
not to say that Chandlers have
unsatisfying endings or that reading a
Christie is a slog. Both writers are
among the best in the genre, and so
every part of their work is adequate to
its purpose. But in lesser novels, when
these two aspects are out of whack, you
can get some truly bizarre results.

Brigitte Aubert's Death From the
Woods, which was recently translated
from the French, is a good example of a
book to read for the journey. Winner of
the 1997 Grand Prix de Litterature
Policiere, it has the perfect heroine.
Elise Andrioli is beautiful, funny and
brave. And blind, mute and quadriplegic.
The book reads like romantic suspense
from 30 years ago, with the finely tuned
hysteria of an Ursula Curtiss mystery.
Odd threats are suggested. Everyday
events hint at unspecified horrors.
Paranoia has seeped into the prose until
it is inseparable from it.

Of course, in this day and age a writer
couldn't get away with such skittishness
in a full-facultied woman. In real life
most people are still spooked when a
back door slams suddenly, but on the
page women can coolly fight off assaults
that would have left the old 50-Foot
Woman bleating for mercy. Make the
heroine a blind, mute quadriplegic,
though, and every little twanging of the
nerve will make perfect sense. She can
be brave just sitting in the passenger
seat.

Elise has been incapacitated by the
terrorist bomb that killed her fianci,
and, her movie theater sold, she has
retreated to a Parisian suburb, where
she is cared for by her longtime
housekeeper, Yvette. One day Yvette
leaves her sitting in her wheelchair
outside a supermarket to catch the sun.
There a disturbed little girl who calls
herself Virginie tells Elise she saw
"Death from the Woods" kill a boy who
has been missing for a few days. That
afternoon Elise hears her physical
therapist tell Yvette that the boy has
been found, strangled.

It is hard to imagine a situation that
could intrinsically arouse more
curiosity. Since the story is confined
to Elise's point of view, what is going
on is always open to at least some
doubt. Elise's encounter with Virginie
sends her into a whole new circle of
people she must learn about in her
strange, new, limited way. One man
declares his love for her. Huh?
We may be in love with her, but
then we know her. It is perfectly in
keeping with the tone that another
recently acquired friend eventually
turns out to be an impostor. Like
Virginie, adults confide a lot in Elise
(shades of "The Heart Is a Lonely
Hunter"), but the only way she can
respond is to raise an index finger. Ah!
That finger! It is truly eloquent. And
funny. How can it be funny? Yet it is.

The uncertainty of not knowing whether
everyday details of life are threats is
far more frightening than a sudden,
bloody-knifed attack. Aubert is free to
take full advantage of this
circumstance, and she does. She
shamelessly chases suspense. I am always
suspicious when reviewers talk of
"nail-biting" and the like. (Someone
should do a study of whether such
descriptions have tapered off with the
widespread use of Prozac-type drugs.)
Still, when Elise regains consciousness
toward the end of the book in an unknown
place with no clue as to who or what is
beside her, it is one scary moment.

A lesser (or greater) writer would let
the grimness of the subject guide the
book. Aubert never does. Her book is
wonderfully sly, and Elise's narrative
is an expert mix of wryness and tension.
At one point she thinks she is trapped
with Virginie in her dead fiancé's
apartment by the still unknown murderer:

She comes to my side. I hear
her nimble little fingers feeling around
for the bolt. Okay, she's pulling it,
but what's she doing now? Virginie! I
don't hear her anymore. Virginie, where
are you? This is no time to play
hide-and-seek. There's nothing but
furtive sounds. I take a breath and
slowly count to twenty. I hear her
moving to my right, coming toward the
wheelchair. Is this a new game? The
worst thing about not being able to
speak is not being able to yell at
people, getting in their face and
barking, giving orders, insulting them.
What I really miss is insulting people.
Ah! There's an inrush of air to my
right. Well, in any case, the door's
opening and --

The climax itself seems interminable,
however, and once the explanation
begins, the mind boggles. Oh, the
identity of the murderer -- which for
obvious reasons Elise hears about rather
than divines -- is reasonable enough.
The reader will probably guess it, but
remember, you're not supposed to pick
this book for its solution.

Still, you have to go through dozens of
pages of gobbledygook in the closing
chapters: bogus psychiatric analyses,
who thought what when, what was a
coincidence and what wasn't, etc., etc.
This astonishingly jury-rigged nonsense
is the result of Aubert's having
sacrificed everything to keep you
turning the pages. The ride, I must say,
is fabulous, but you may find you have
to pay too high a price for it.

Moment of Truth, by Lisa
Scottoline, has the opposite problem,
which is the more common one. Because
mysteries by definition require a
question and an answer, many writers
think that by simply supplying a
plausible answer they've got the whole
problem licked. The problem for the
reader is: Will the sometimes tedious
journey through fairly indifferent prose
pay off in the end? Here the committed
reader of mysteries is the most hopeful
specimen of humankind. Time and time
again you are disappointed, but memories
of the one purely satisfying solution
you read -- when? your sophomore year in
college? -- keep you reaching for more.

I look for certain tip-offs.
"Surprising" in a blurb on the back
cover is good; "twisty" or
"Hitchcockian" is better. (For some
reason People magazine is especially
reliable in this regard. Its writers
have a good eye for a fake-out.) I also
have learned to trust certain authors;
that's one reason series are so
important to the genre. You can check
out the prose to make sure it's
readable, but there is no way you can
check out a possible surprise ending
without ruining it. So you get to know
who's going to come through.

Lisa Scottoline generally does, which is
what kept me going through most of her
new novel. The lack of suspense here was
uncharacteristically extreme, even
wondrous. A man comes home and finds his
loathsome wife murdered. He suspects his
already victimized daughter and so
decides to confess to the crime himself.
About 200 pages pass as his lawyer and
the justice system catch up to what we
knew from the beginning. Then, at the
end, firecrackers: The reader is treated
to a truly nice double-twist. It is hard
to imagine, in fact, how such an
interesting murderer could be attached
to such a dull narrative. But Scottoline
may have gotten herself too far in debt
to us for the payoff to be worth it.

Deep South, by Nevada Barr, is
not quite so misshapen. Like
Scottolines latest, this book is much
better at the end than through the body,
although the disparity in this case is
not as great. Barr tries to increase the
journey's interest by describing the
workplace tensions and accommodations of
the heroine and her investigative team
-- making it a sort of police procedural
of the emotions.

Park Ranger Anna Pigeon, a transplanted
Westerner new to Mississippi, has to
deal with obstreperous underlings who
don't want to be bossed by a woman, with
her growing feelings for the local
sheriff and with one dead and disfigured
teenage girl. Barr has the confidence to
let Pigeon be unlikable (she says she
doesn't like children, for instance,
while contemplating the corpse), and as
a result we like this character all the
more. But the situations and the other
characters are pretty much pro forma, so
I was pleasantly surprised by the
solution, which is clever and perfectly
fair. A lot of what looks like local
color -- and feels a little too
researched -- is actually key
information that takes on importance in
the final chapters.

Because of the relatively sensible
proportion of story to ending, "Deep
South" is probably the most competent of
the three works I've considered here --
if competence is what you're looking for
in a mystery. I'm not sure I am.