A Wall Street Journal editorialist unloads on Hillary Clinton and shoots herself in the foot. 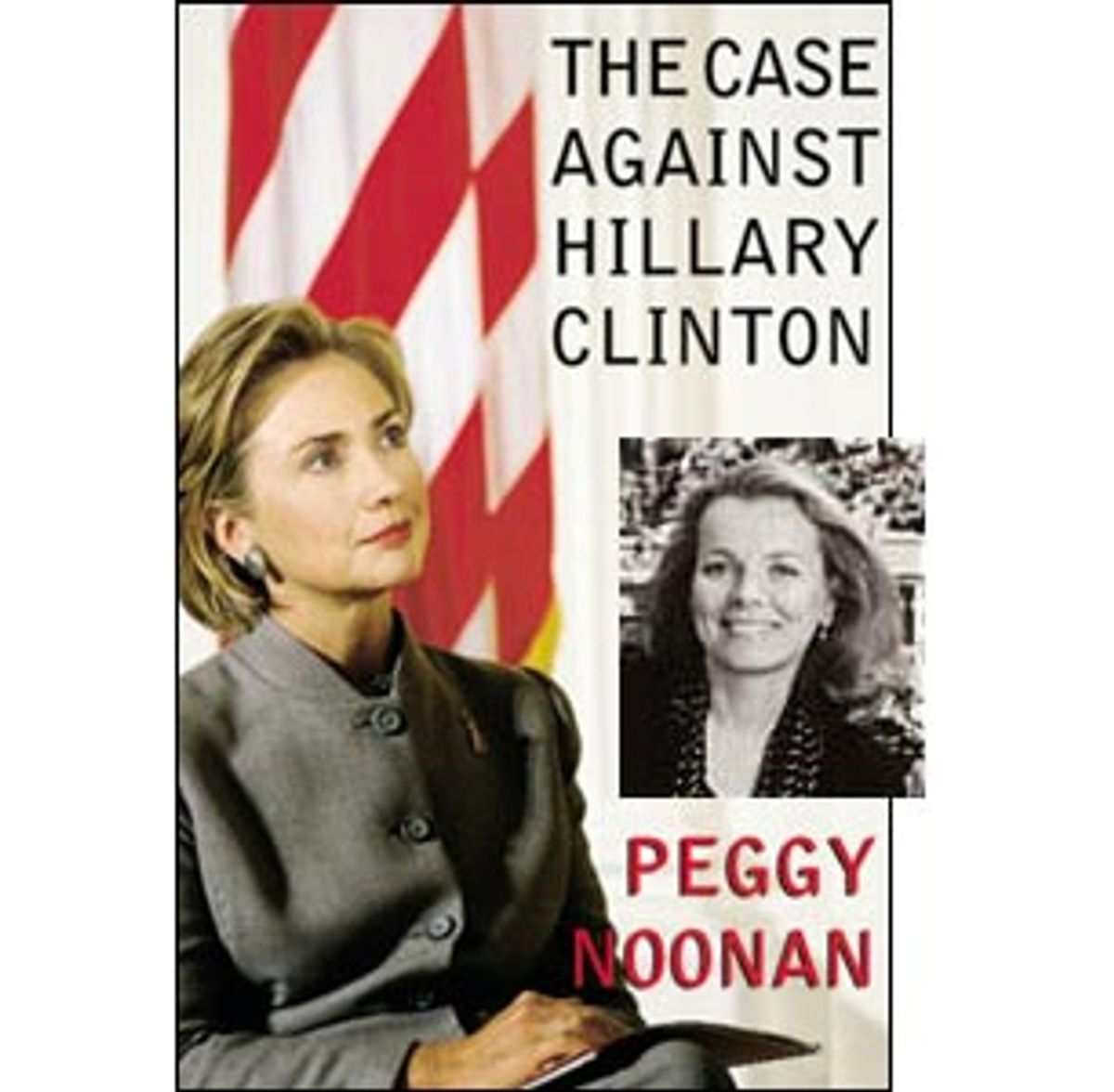 What is it about Hillary Clinton that inspires attempts at amateur psychology? Gail Sheehy's book, "Hillary's Choice," was a Whitman's Sampler of pop psychology, filled with theories both nutty and chewy. And this week the first lady's opponent in the race for Senate, New York Mayor Rudy Giuliani, explained Clinton's reaction to his reaction to the NYPD shooting of another unarmed black man as "projection." (In Dr. Melfi fashion, the mayor then went on to explain the concept to the assembled journalists -- who have doubtless spent a lot more time on the couch than hizzoner.)

Now comes Peggy Noonan, Wall Street Journal editorialist, Good Housekeeping contributor and former Reagan speechwriter, who is ready to do her dance with the psychological tar baby that is HRC. In "The Case Against Hillary Clinton," a book the author herself brands a "polemic," Noonan cites the expert opinion of an anonymous associate of the first couple.

"The key to understanding both Hillary and Bill Clinton, she began, is that they are narcissists," writes Noonan. Hauling out a well-thumbed copy of Otto Kernberg's "Borderline Conditions and Pathological Narcissism," the unnamed associate admits to an unhealthy obsession of her own. "She told me she'd gone to the book in her own attempt over the years to understand them," the author continues, "and what she'd read seemed almost a case study of the Clintons."

Well, that settles it. No further witnesses.

By her own account, Noonan wrote "The Case Against Hillary Clinton" out of a sense of personal need. As a native New Yorker (a Massapequan, for God's sake!), the often witty and trenchant author of "What I Saw at the Revolution" and "On Speaking Well" sees Clinton's run for the Senate as an affront against her state. Noonan knocked out this breezy (and, despite its scant 181-page length, rather redundant) screed in a few months, armed with only a few other Clinton books (Barbara Olson's "Hell to Pay" gets a few nods), Lexis-Nexis and a wheelbarrow of attitude. For in Noonan's cosmology, the Clintons are evil twin stars orbiting in the same constellation as serial killers and other pathological liars.

"Lying, of course, is not the Clintons' only distinguishing characteristic," reads one typical paragraph. "They are marked, too, by an absence of grace, a lack of personal humility that is actually jarring, perhaps because it threatens to lower both standards and expectations for our leaders."

They're lousy tippers, too.

But Noonan meant to do more than vent her spleen; this book is not, she insists, a mere act of therapy on her part. It is meant to inform New York voters (she told the Albany Times-Union that "it could be read aloud in bed" by couples -- a form of GOP foreplay, I suppose); nail the first lady on her record (or lack thereof) once and for all; and paint a damning portrait of the Clintons through metaphor and fantasy.

Sadly, "The Case Against Hillary Clinton" feels forced, an act of party loyalty, homework for the GOP. Writing in the second person, Noonan tries to make her obsession (and her assignment) yours:

"Your mind rocks," she writes of the Clintons (for she takes them as they offered themselves: a two-for-one sale). "You make excuses for them time and again because you think, you know from human experience, that no nice educated man in an office like that can be the utterly dishonest person his critics say he is, no nice woman with a kid and a law degree could be the kind of dissembling character her foes insist she is. And then one night when you cannot sleep and your mind begins to wander you think: Wait, he could be. She could be!"

Despite such fugues of bad writing, Noonan does not have a tin ear. While studying in the United Kingdom in 1972, she recognized the originality of John Osborne's damning voice when she saw "Look Back in Anger" onstage, and hears echoes of his class criticism in the works of David Hare. For speechwriting is, among other things, a theatrical endeavor.

It should come as no surprise, then, that the best sections of this book are scriptlike. In a lively passage set in the Hollywood home of Michael Eisner, Noonan "quotes" the first lady lambasting the assembled heads of the entertainment industry for producing degrading, violent art. Before the likes of Ted Turner, Steven Spielberg, Rupert Murdoch and Gerald Levin, she says, "I'm going to speak my heart -- the real one, not the one I show on TV." She rips the executives for undermining our society (wait, I thought that was her job) and demonstrates a canny grasp of contemporary culture.

"How is 'Sex in the City' going to be more demeaning," she asks them rhetorically, "are they going to start dating German shepherds next year?" These comments were made a few months after the Columbine massacre, see, and Clinton was imploring these taste-makers to look into their hearts, to try and make America a more decent place.

"Which is just when I awoke," writes Noonan.

Yep, it had all been a dream! Though she roasted Edmund Morris' acorns for the liberties he took in his biography of Ronald Reagan, Noonan is not above a little "Dutch" courage herself when the occasion calls for it (i.e., when the narrative flags, as it does after the usual flogging of Travelgate, Filegate, Whitewater, etc.). That the Hillary Clinton who stuns the entertainment moguls into silence sounds nothing like the Hillary Clinton we have come to know (or not know) seems to be the point. She'd be a better person, and certainly a better politician, Noonan implies, if she spoke in long, ideological Paddy Chayevksy-like speeches.

But who wouldn't? John McCain's appeal to the press seemed to lie largely in the perception that he shot from the hip and said what was on his mind. Unlike the Clintons, certainly, but unlike almost every other politician you can think of as well (starting with Bush). Noonan is criticizing Clinton for not being what she would like her to be: a freewheeling risk-taker. As Michael Oreskes wrote in his New York Times review of the book, "The great speechwriter invents the speech she wishes Hillary would give and then says the fact that she never gave it demonstrates Mrs. Clinton's lack of courage to use her political strength for a larger good."

With a title like "The Case Against Hillary Clinton," you expect the deck to be stacked (the jacket cover is a photograph of the first lady in an attentive pose, wearing what could be a Mao suit). What you don't expect from a writer of Noonan's sophistication is the complete, unbridled demonization of the Clintons. They represent what the Pope called "the culture of death," according to Noonan -- even as she denies their significance. "She does not seem as big as the emotion she engenders," writes Noonan of her prey. "She lacks historical heft, is not a person of real size and authenticity."

Like Morris, Noonan has peeled back the layers to find there is no onion there. She has seen through the Clintons' tired charade and is calling upon New Yorkers to do the same. She and the GOP she serves are banking on a shared wariness among voters in the Empire State, an unstated desire that the first family will just go away.

But as psychosomatic political conditions go, Clinton-fatigue has nothing on Giuliani-nausea, pandemic in New York these days. The mayor reached a new low this week when he released the juvenile record of an unarmed man shot by undercover cops and told reporters the victim was "no altar boy." Calls to modify his behavior sent Giuliani into even greater snits; I keep expecting him to stamp himself into the ground, like Rumpelstiltskin, making Clinton the winner by default, tisking and tasking while baking fresh cookies.

But residents of upstate New York (not to mention Long Island and even parts of the outer boroughs) may be more forgiving of the mayor's antics, and this is the audience that Noonan is playing to as well. "The best lack all conviction, while the worst are full of passionate intensity," William Butler Yeats wrote in "The Second Coming." Clinton's campaign has been largely substance-free while the mayor is nothing if not intense.

Can Clinton make an entire campaign out of Rudy's famous temper? November is a long time away and as cooperative as Giuliani has been, she'll probably need to give voters other reasons to vote for her besides just hating him. Just as Noonan (and the GOP) will need to give Republicans more reasons to elect the mayor -- the only man who has never been wrong about anything -- to the Senate than their hatred of Clinton. We need positives, as the pols are fond of saying this season, not polemics.