Confessions of an awards whore

I sneered at the whole cheesy routine until I was nominated for one. Was I thrilled? I was Sally Field squared. 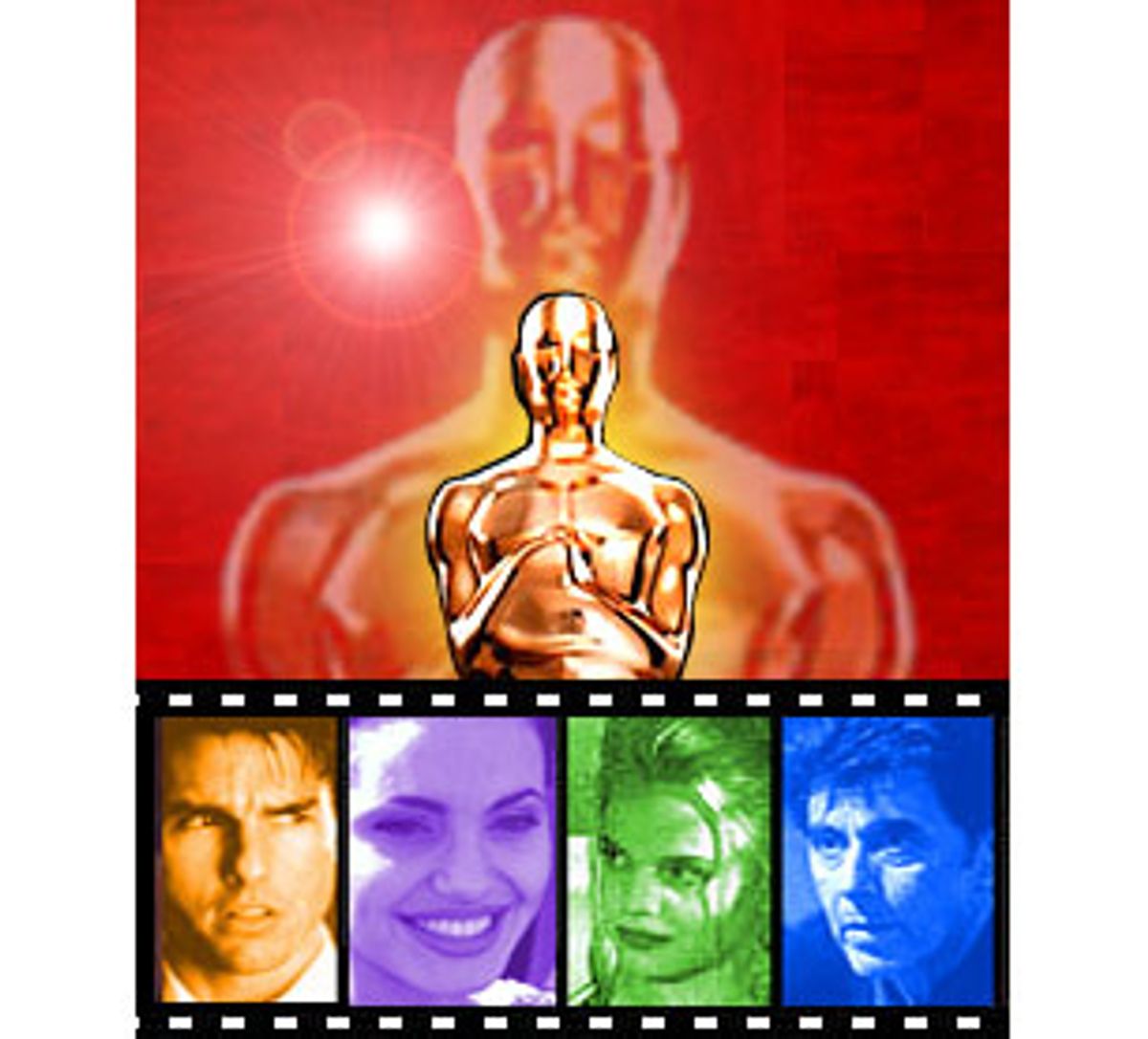 A young woman in an evening gown, standing alone on a spotlighted stage, strings together three solid minutes of empty platitudes and vaguely inspirational aphorisms. The Miss Vancouver Pageant is in full swing. One contestant sings "My Heart Will Go On." Another sings "My Heart Will Go On" in Italian. Hardly a 21st century phenomenon, but so what? Oscars, Grammys, Miss America -- competitive pageants are a hardy species.

The absolute best movie, best liner notes, most admirable and accomplished young woman -- apparently there is no such thing as an unquantifiable virtue. Vancouver recently hosted the Aboriginal Achievement Awards, at which a man was honored for negotiating a native-land claim (although best treaty was not an actual category). The relentless procession of awards is frequently derided as pointless, ridiculous, even ludicrous. All of which is probably true.

But also irrelevant. Awards ceremonies, so often cursed by bad Celine Dion renditions -- or, even worse, Celine Dion -- are nonetheless inherently compelling. The love of horse races and big blue ribbons must surely be in our DNA.

I've occupied every seat at the awards banquet: winner, also-ran and imperious judge. The winner knows that at last his or her work has been understood, his or her special qualities recognized. The loser suspects it's all a farce. The judge knows it.

Coaxed by a friend into officiating at one tawdry competition, I sat horrified as a parade of sad modeling wannabes flounced around a nightclub dance floor, hoping that we the jury would sense their untapped potential. Meanwhile organizers were still thrusting messy bundles of ballots into our hands as contestants were already leaving the floor.

Too late, it became clear that we were complicit in a cynical little scam -- trading on pathetic dreams of stardom to fill up a bar on a slow night, all under the guise of a charity fund-raiser. I didn't have the heart to ask whether the poor saps had paid for their places on the ballot.

Yet, despite having seen how those sausages are made, my craving persists. I'm an awards whore. The emotional need for recognition trumps the intellectual realization that such rankings are silly. Plus, there is the undeniable utility of such honors. To be a good writer, performer or treaty negotiator is a fine thing. But for the instant reaction, the light that goes on in your interlocutor's eyes, there is no substitute for that magic hyphenated phrase, "award-winning." Describe yourself as a star and your skeptical audience will have only your word for it. Describe yourself (or better yet, be described) as an award winner, and it's official. You won. You the man!

Not every judging experience has been as shabby as that nightclub fiasco. As a jurist in Canada's National Magazine Awards, I was impressed by the thoughtful discussions that helped our panel agree on its favorite candidates for glory, and the resulting honorees were truly worthy. But any jury prize is basically arbitrary. Certain types of work habitually win awards while other worthy efforts, executed with just as much skill and dash, never have a chance. They lack some key trigger that might shoot them to the podium: a perception of weight, impact or emotional power. Cheap emotion often works like a voodoo charm, while steady, reliable accomplishment -- the hallmark of a great columnist -- is virtually never recognized, at least not in a way that will take up mantel space.

Legitimate personal struggle can definitely be parlayed into prizes. Last year I wrote a chronicle of alcoholism in which I confessed that once upon a time, I was not merely a drunk but an incontinent drunk. They gave me an award. Note to would-be winners: Pants pissing plays big.

Perfect awards require perfect juries. Like Socrates' plan for good government via enlightened despots, our prize ceremonies ought to have wise, all-knowing adjudicators. Fat chance. The Oscars are best ignored, not because the very idea of such awards is repugnant but because a piece of second-rate tripe like "American Beauty" is poised for a sweep while the people behind "Three Kings" probably had trouble getting tickets.

It's hard to decide which was more remarkable -- the revelation that Hollywood could still come up with an action film so original and intelligent or the revelation that having done so Hollywood would then fail to congratulate either itself or the filmmakers for the accomplishment. The academy's neglect of "Three Kings" merely underlines the irrelevance of the show-biz establishment -- like those lists of past Grammy winners that now read like the predictions of the world's most incompetent bookie.

Back at the Miss Vancouver Pageant the public speaking continues, with most offerings struggling to achieve the level of a bad "Star Trek" monologue. One young woman gives a brief list of the 20th century's greatest accomplishments. It includes Velcro and cell phones. "Galileo, Madame Curie," recites another contestant breathlessly. "They lived with their hearts, not their minds."

Then, miraculously, one young woman walks to the foot of the stage and begins speaking -- really speaking -- to the audience. Her words, while not particularly weighty or memorable, are delivered as though across a table for two in a casual diner. She talks easily about her priorities and plans for the future. Like all good communicators, she makes the difficult task of public speaking appear effortless. Her reward: failure to make the finals. Hence, Awards Lesson No. 1: Always let them see you sweat.

Jimmy Stewart spoke bemusedly about actors who will thrash and grimace through heartbreaking performances as drunks or junkies, then look thoroughly unconvincing as they are shown walking downstairs to check the mail. The best always make it look easy, and then the Oscar goes to Whoopi Goldberg.

Almost any performer will tell you that comedy is the hardest thing to pull off, and yet as a rule the major Academy Awards never go to comedies. Good comedy is light and airy -- surely not as Oscar-worthy as 300 pounds of emoting over some screenwriter's contrived tragedy.

Last year's big winner, "Life Is Beautiful," was the exception that proved the rule; it broke Oscar's comedic moratorium by creating that unique genre, the Holocaust yukfest. Had Roberto Benigni never made the bold decision to perform his pratfalls within the Auschwitz gates, we would surely have missed the opportunity to observe his Oscar-night impersonation of a deranged puppy.

Like others before me, I sneered at the cheesy awards routine until I was nominated for one. Was I thrilled? I was Sally Field squared. Now, I confess, I wait for magazine nomination season (in Canada, spring). I wish I didn't care, and I admire those who genuinely don't. But, well, maybe it's a Canuck thing -- I'm more the Jim Carrey type.

(Think about this for a moment: First the ballots went missing, then the Oscar statuettes themselves. Police claim to have found the culprits, but surely the mastermind is still at large. At this very moment Carrey is probably ambushing Billy Crystal and stuffing him into the trunk of a black sedan. Sunday night in the Dorothy Chandler Dungeon, located somewhere beneath Carrey's garage, a private little Oscar ceremony will be held: "And the Oscar for best overdubbing in a foreign film goes to -- why, Jim Carrey again! That's 18 straight! Ha, ha, fantastic! Can I have some water and a biscuit now, Jim?")

The tacky appeal of the Oscars seems impervious to changing tastes, but not every glitzy ritual has retained its popularity. A quick glance around the auditorium at the 66th annual Miss Vancouver soiree leaves the impression that heavy security has screened out all but close friends and immediate family. Pageantry, it appears, has become box-office poison. But hey, to each his own.

In the midst of that sad, patchy little audience, I'm perched on seat's edge. Come on, No. 6! Baby needs a new pair of shoes!