Yanks abroad and French nationals still bewildering one another in a funny follow-up to the bestselling "Le Divorce." 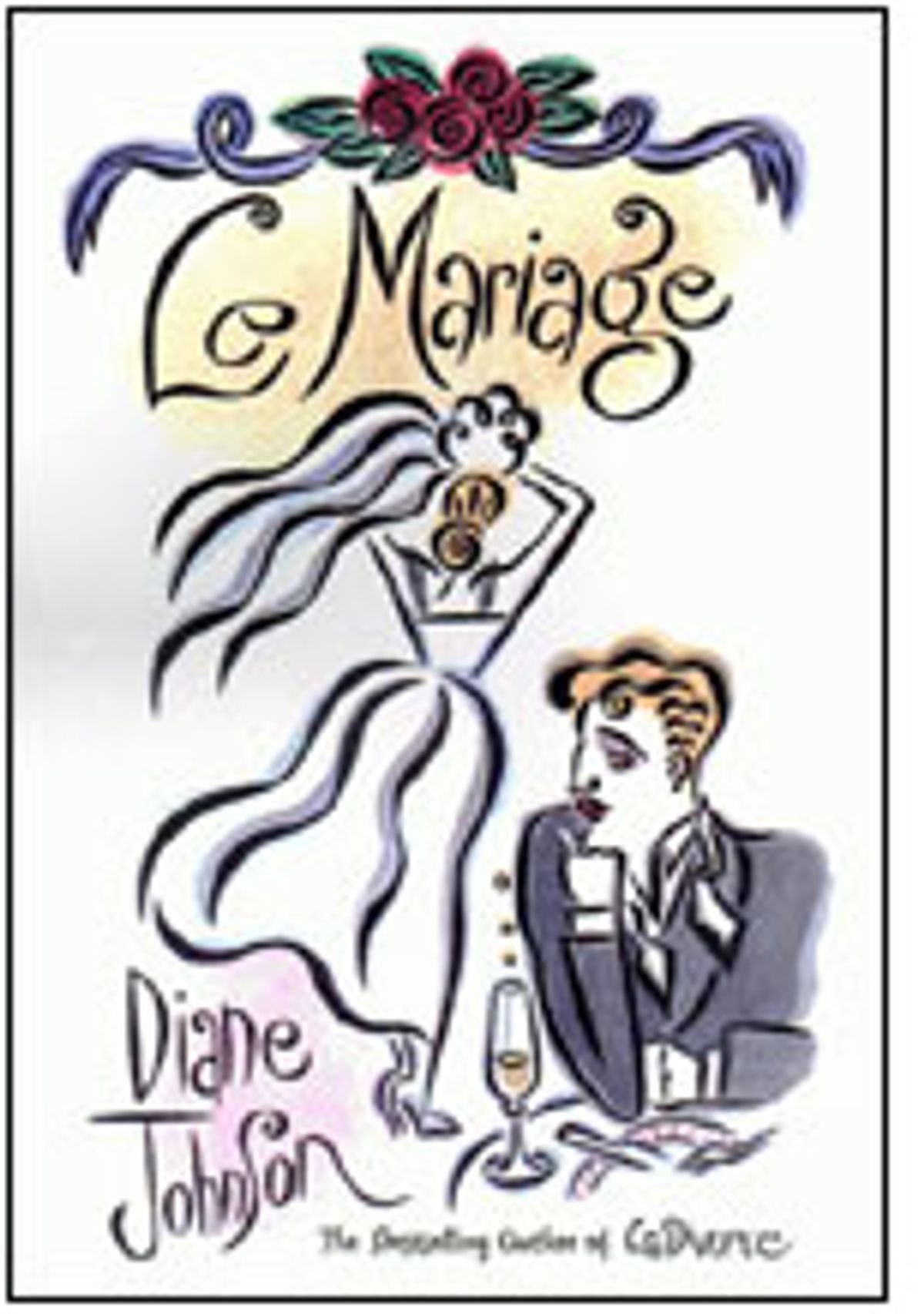 Diane
Johnson's latest version of the
international novel is a clever twist on
the joke "Enough about me. Let's talk
about what you think of me." Americans,
she knows, rather than envying the
French their foie gras and Godard,
rarely give them a second thought. But
we are extremely interested in what
those snobbish, stylish Europeans think
of us -- of our directness, our money,
our industry and our fashion sense.

In "Le Mariage," two American expats,
Clara Holly and Tim Nolinger, navigate
the trans-Atlantic divide. Clara is
married to Serge Cray, a reclusive
Polish director, and the couple live
together in a ritzy Parisian suburb
where Clara belongs to the "American
world that exists like a specialized
form in a complex ecosystem, dependent
on its hosts but apart from them." Tim,
a freelance journalist, is another type
of transplant altogether -- marginal,
fluid, opportunistic: "There are a
dozen, or dozens, of Americans like him
in Paris, clinging to the rather
precarious livelihoods they have managed
to score, for the pleasure of being
there or because they have burnt their
bridges and have no idea how to return."

The antitheses of the innocents abroad
in a Henry James novel, Johnson's
Americans in Paris are steeped in the
cultural syntax of both countries -- and
powerless to do anything but cynically
observe and snicker. At a wedding party
for Tim and his Parisian fiancée,
Anne-Sophie, Tim is both irritated that
his future mother-in-law has hired a
maid to dispense ice cubes (something
she's heard Americans inexplicably
adore) and embarrassed that his friends
conform to stereotype by cloddishly
ruining their kir champagnes with ice.

Johnson is a beguiling writer, serving
up catty observations with loopy good
humor. The sharpest social critic in
this novel is Anne-Sophie. Unlike the
other French characters, who believe
Americans are rich and lacking in
subtlety, Anne-Sophie adores everything
American, exclaiming happily about the
tackiest aspects of our mass-market
consumerism. In her exuberance (fast
food, strip malls, Circuit City!) she
points unerringly to all that's wrong
with the United States.

"Le Mariage" shares with "Le
Divorce," Johnson's 1997 bestseller
and a National Book Award finalist, a
subject, a sensibility and a handful of
characters. Each novel is a comedy of
manners, but "Le Divorce" runs out of
steam three-quarters of the way through.

"Le Mariage," on the other hand,
steadily gains momentum as seemingly
minor threads recur, gaining interest
with age. In one such thread, the Crays
refuse to let hunters onto their
property, defying a French law that
permits your neighbors to shoot
partridges and deer where they will. For
the hunters, the Crays are the
embodiment of American hypocrisy,
representatives of a cavalierly
murderous, gun-happy nation quibbling
over a few dead pheasants. Clara and one
of the hunters fall in love, the grudge
match escalates and law and emotion
collide more brutally with each fresh
contact.

"Le Mariage" is a slight novel but,
within the scope of its modest
ambitions, a near-perfect one. Johnson
is a masterly storyteller who can pull
off a storybook ending -- love, joy, a
trip down the aisle -- without making us
gag. "To look for happiness was like
looking at the sun during an eclipse.
Not only did the sun disappear, but you
burned your eyeballs too. Yet here,
strangely, unsought for, was happiness."
The true marriage, of course, is the one
of two cultures, poorly matched and
prone to wild misunderstandings, yet
ineluctably drawn together in a
passionate and lasting embrace.

Elizabeth Judd lives in Washington. Her work has appeared in the Village Voice and the Philadelphia Inquirer.