The revolution that wasn't

Stephen King's e-book success proves that the new boss will be the same as the old. 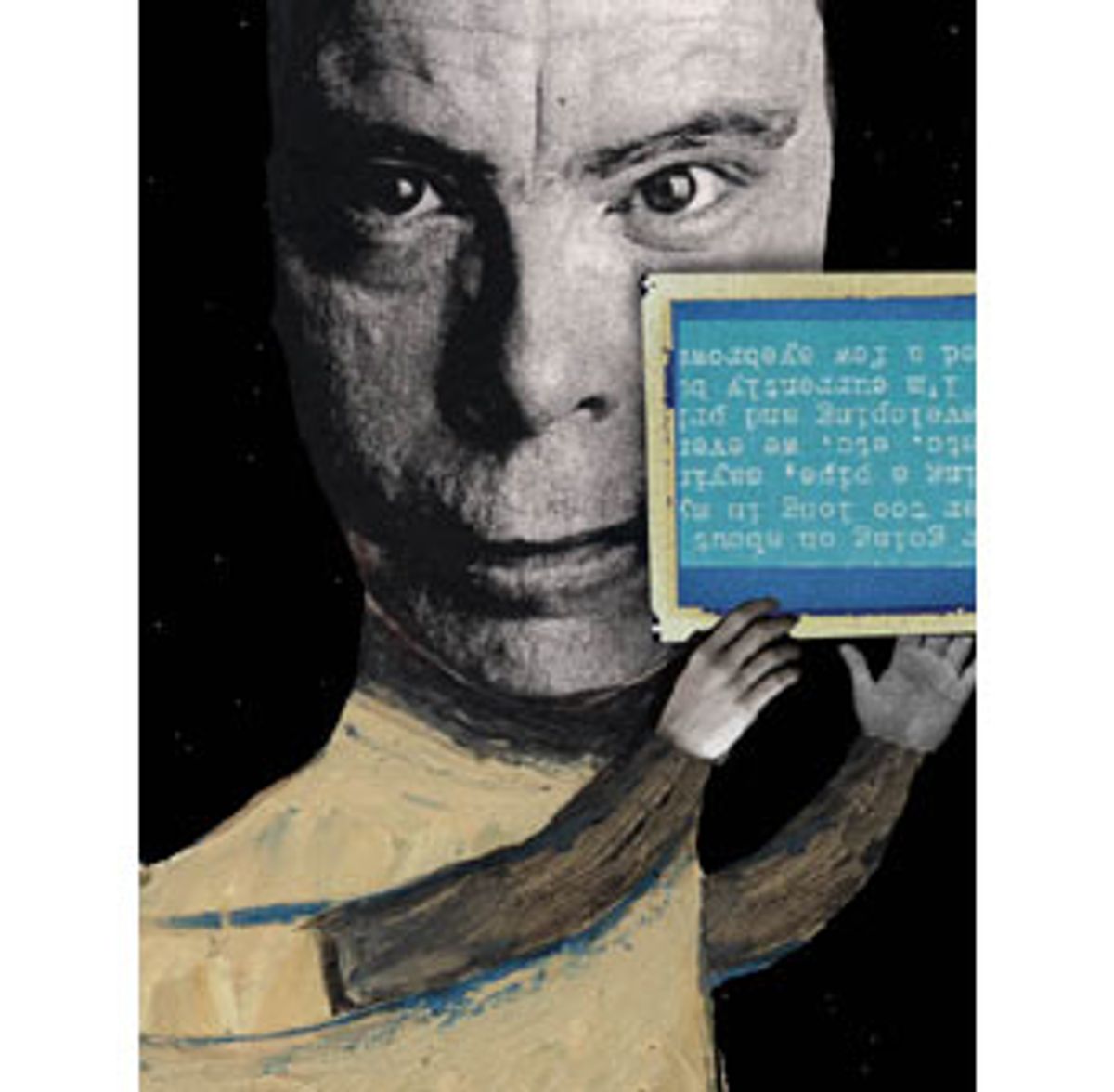 The news that Stephen King would release a story exclusively in digital form and exclusively via the Web rode the media mountain like an intermediate skier on a black-diamond trail -- tentatively at first, then with a little more confidence and, finally, hurtling out of control, crashing into unexpected territory. The trade press gave its imprimatur, and within a few days the story spread like a virus over Web and wire. Television and radio chugged behind.

For those who've watched digital content come into its own, the frenzy was nothing short of remarkable. Never before had a story about text and electronic media penetrated so deeply. Even the newbiest of online shoppers could find "Riding the Bullet" advertised on a half-dozen sites. Grandmothers heard about it on their transistor radios; kids, long a demographic stronghold for King, couldn't log on without seeing links. The network news pounded away on the story, morning TV producers fell all over themselves to interview King's publisher and local newscasts aired one breathless piece after another. Grudgingly, even the New York Times ran a review. Bemused and perhaps overwhelmed, the offline press affected a tone of awe. "It's a new book -- and you can't get it in bookstores," pronounced one anchor, sounding very much like the baritones in 1950s film shorts who predicted a future in which you wouldn't need ovens or refrigerators.

A story of King-like dimensions, it had all the right elements -- a futuristic sheen, a triumphant hero, a pending revolution.

If only it were true.

A glance at publishing history shows that the publication of "Riding the Bullet" as an e-book achieved little of technological or substantive consequence. Authors have been releasing electronic work without a print complement for years. Several have even done well, selling a few thousand copies with little overhead and no one to take a pound of flesh. As for the content itself, well, unless one presumes King's story is "better" than the work of David Saperstein, James Ridgeway and a host of others -- an endlessly debatable point -- then what made this different?

There was one possible distinction: This marked the first time a heavyweight of King's ilk had attempted an end run around traditional publishing. But even this sounded like the stuff press releases are made of. King had the support, financial and moral, of his conglomerate publisher, Simon & Schuster, and of behemoth booksellers like barnesandnoble.com and Amazon.com as well. He isn't even the only heavyweight to distribute his book in an unusual way of late. John Grisham, perhaps the only writer in America who can hold his own with King in a battle of the brands, recently began offering his new novel as a magazine serial only. No book, no Web. Grisham didn't even shop the manuscript around, choosing, in effect, to self-publish it in the Oxford American, the little-known Southern literary magazine he funds. Needless to say, he had neither the cooperation nor the blessing of Doubleday, his publisher.

But the press mostly ignored Grisham. Don't send him a check just yet, but you have to feel a little sorry for the guy. Two bestselling authors toss coins into the fountain. One barely hears a ping; the other's splash reverberates as if in an echo chamber, a fact born out not only by ubiquitous press coverage but by the 500,000 Web surfers who downloaded "Riding the Bullet". (This despite the majority of Americans saying in polls that they wouldn't actually read a work of substantial length on current screens.)

The difference, of course, is that King chose a new distribution model while Grisham's has existed for centuries. And with newer models, Americans seem to take an all-or-nothing approach. We downplay developing technologies until they reach critical mass, then we do a 180. MP3? People will never give up CDs. Digital music? Who wants to listen to an album at their computer? Chuck D, the Artist and geeks go about their digital business amid the naysaying until something gives, and then, from seemingly out of nowhere, we're in the throes of revolution.
E-books? "You can't take them to the beach or the bathroom," goes the complaint, along with, "Who wants to read on a screen?" -- and what about the much-rhapsodized sensuality of paper and ink? Not that this has stopped scores of authors from posting chapters of their books on Web sites or peddling their text as downloadable PDF files. We just hadn't noticed them. But then King steps in and suddenly consumer e-books are as inescapable as death and taxes.

Yet even a cynic like myself couldn't help but feel that something important was happening. Perhaps King didn't start a revolution in the classic sense. But in this Clintonesque age of image and branding, he achieved something masterful. After years of awaiting a popularizer -- not a pioneer or radical but its opposite -- the e-bookerati finally found one. What, after all, could be more familiar to the cultural consciousness than a King story? Who else could be so "literary," yet so accessible? What other form of entertainment could be so quintessentially American? King didn't just disseminate a horror story; with one swing of his mighty axe, he struck down the dark side of e-books. The Coca-Cola of writers had stamped this strange new format with his seal of approval.

The effect was to equip, psychologically if not technologically, hundreds of thousands of Americans to download a piece of fiction. In so doing, King launched a kind of digital event, confirming the power of electronic media to deliver not just commerce or information but mass entertainment -- and the kind of excitement normally reserved for a blockbuster film. Anyone who went to a site in search of the King book felt like they were part of something larger. Egged on by the media, they couldn't wait to try out this new format. (Whether they read or liked it is another question.)

For those unfortunate enough to encounter crashed servers and frustrating delays, there was something familiar about this, too. The experience was not unlike the disappointment of being shut out of, say, "Star Wars" on opening weekend. (That online booksellers were giving away the title for a limited time only enhanced the sensation of being part of a rush.) Given an electronic medium that had previously offered us a series of fragmented amusements -- conspiracy theories, satiric sites, product-linked content -- what a comfort to know that King, the personification of mainstream entertainment, had rented an apartment in cyberspace.

Others had tried to create unifying digital events before. The silly Web soap, the Spot, thought it accomplished this in the mid-1990s, only to watch its popularity quickly disappear. When Ford recently tried to lure surfers into shaping a narrative for one of its TV commercials, media critics ridiculed them for it. Perhaps the most successful example was the "Blair Witch Project" phenomenon, which saw crazed fans scouring the Web for supplemental material to stoke their appetites. But where the success of that movie made the case for digital media as a promotional tool, "Riding the Bullet" took the next step by showing how digital media could serve as both means and end. Its essence was its own publicity.

King caught more than just the public's attention. With the media fretting over the increasing ability of authors, musicians and film auteurs to take their art straight to the Web, King showed them that the next wave could easily come from their own team. Yes, to the media King and Simon & Schuster may look like visionaries, rooted in Old Publishing yet reaching for enough of "the future" to impress skeptics. But in their hearts and in the hearts of the media they are part of the establishment. King is no upstart hypertext novelist. Simon & Schuster isn't a 'zine run out of some skateboarder's basement -- it's part of Viacom.

And how did S&S itself feel about all this? Pretty good, judging by how it reveled in its handiwork. First it clamped down on start-up Silicon Valley e-publisher Fatbrain, preventing it from selling the book even as it allowed second-rate booksellers unfettered distribution rights. As one publishing exec said, "This is the first time a traditional publisher perceives a New Media company as a threat."

Then S&S made a small but critical gesture: It disabled the story's print function. The company says it did this for security and copyright reasons, and at first glance, it's hard to disagree with that argument. But print publishers have long been vulnerable to photocopying, especially when it comes to shorter text works. Besides, if Simon & Schuster really wanted the "widest distribution possible," as a spokesperson claimed, then it would have encouraged anything to get the word out. That might have resulted in less revenue, but with a $2.50 story and software and retail partners who expected their cut, the project was unlikely to bring in an infusion of black ink anyway.

Instead, S&S seems to be proclaiming something more insidious with the publication of "Riding the Bullet": that not only can it drag us kicking and screaming into the next era of digital entertainment but that, as a traditional content provider, it can control how and when that will happen. For the consumer, it seemed to say, cyberspace offers much that is new -- speed, efficiency, lower costs. But it also reminded us that, for the moment, Old Media and traditional entertainment still rule.

Steven M. Zeitchik is an editor at The Industry Standard. His work has also appeared in such publications as the Nation, Conde Nast Traveler and Publishers Weekly.