"Being Dead" by Jim Crace

A haunting novel about a couple caught and killed in flagrante delicto -- how they got there, and what happens before they're found. 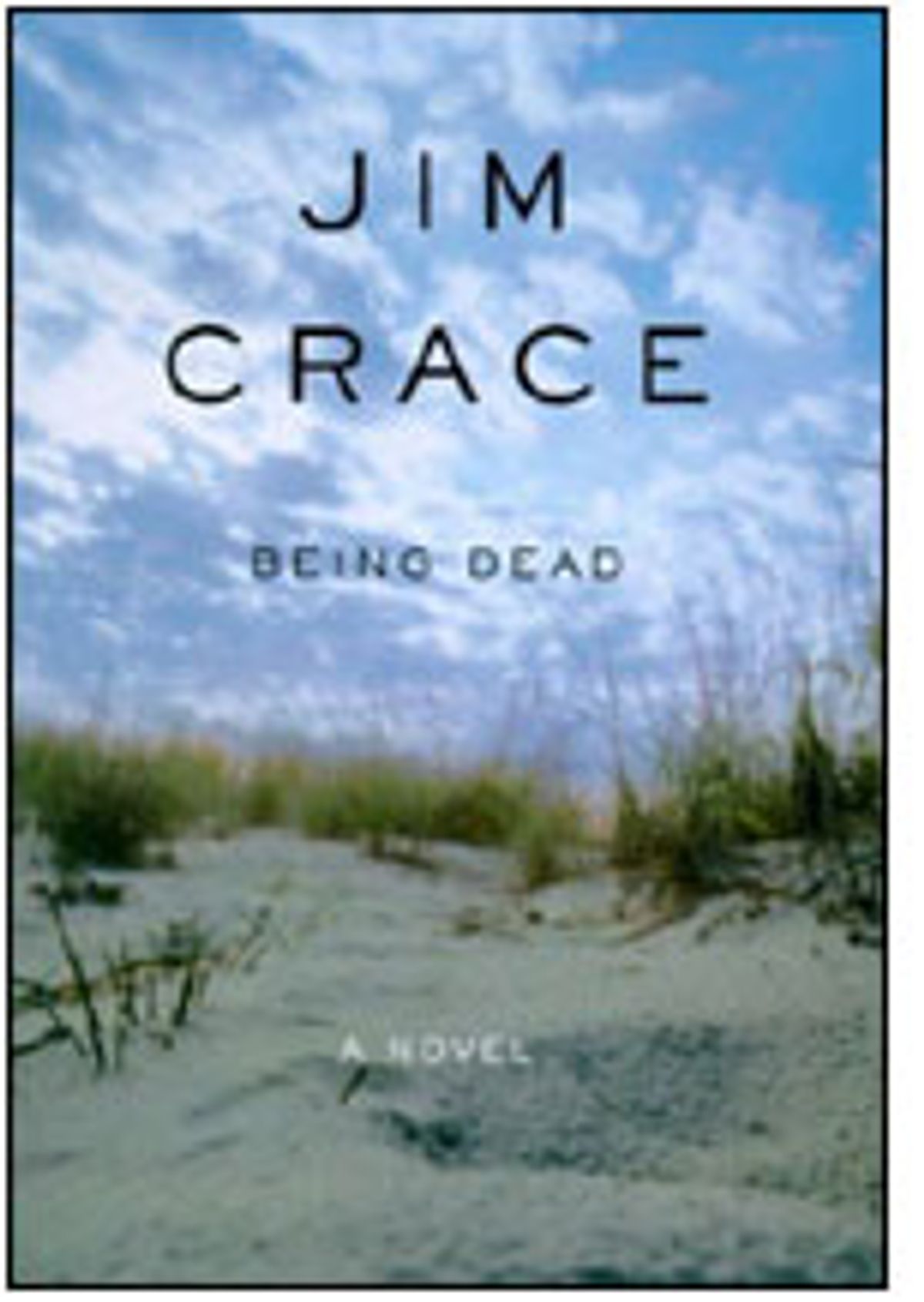 Jim Crace's new novel starts off like a genre mystery, with the savage murder of two middle-aged lovers on a remote and windswept beach. But anyone looking for the traditional mystery plot line -- that old reassuring journey from crime to detection to punishment -- is reading the wrong book. Instead, "Being Dead" takes off on a more eccentric course, swerving backward and forward in time in order to put these two deaths in context. The result is an odd, gorgeously written but curiously abstract novel that's easier to respect than to love.

Joseph and Celice, the unprepossessing zoologists who find themselves in the condition described by the book's title, are not the kind of married couple you'd expect to see on the beach doing anything other than collecting sea-cricket specimens. But on an impromptu visit to Baritone Bay, where they met 30 years before, they take a short, nostalgic detour: "They had made love for the first time in these same dunes. And they might have made love there again if, as the newspapers were to say, 'Death, armed with a piece of granite, had not stumbled on their kisses.'" Discovered in flagrante delicto by a mentally deficient miscreant, the two are heartlessly bludgeoned and left to die -- "traduced, spread-eagled and absurd" -- in the sand.

Crace takes this violent ending as a beginning. Using as his model a funeral ritual he calls a "quivering" (during which neighbors and relatives reminisce about the dead, starting with the most recent memories), he proceeds to "upend the hourglass of Celice and Joseph's life together." Working backward from the murder, he relates in reverse order the mundane events of the day that led up to their final moments on Baritone Bay. At the same time, he reconstructs their lives in the other direction, from the time of their first meeting. These two thematic lines, along with a third involving their daughter's reactions during the six days between their disappearance and their discovery by police, intertwine in a kind of narrative fugue, spun out in chantlike prose that often takes on the measured rhythms of blank verse.

But there is a fourth line to this fugue -- an ostinato played by nature itself. As Joseph liked to say to his students, "Whatever philosophical claims we might make for ourselves, humankind is only marginal. We hardly count in the natural orders of zoology." With this thought in mind, Crace also describes the purely physical changes that Joseph and Celice undergo during their six days in the dunes, as the forces of nature have their say: "Again the crabs and rodents went to work, while there was light, flippantly browsing Joseph and Celice, frisking them for moisture and for food, delving in their pits and caverns for their treats, and paying them as scant regard as cows might pay a turnip head."

Readers prone to queasiness might want to skip a few sections here (as when "the flies lined up like fishermen along the banks of the bodies' open wounds"). But it's this last element of Crace's strange eulogy that ends up being the most interesting aspect of the novel. As characters, Joseph and Celice are a little difficult to take -- prickly, small-spirited, almost willfully unsympathetic. But by placing their lives and obscene deaths in the context of the larger natural processes of decay and regeneration, Crace allows the couple a measure of redemptive grace, something that might have proved impossible in a more conventional narrative. And so in "Being Dead" he pulls off a remarkable bit of legerdemain, combining various unappealing parts into a whole that somehow -- despite those descriptions of oozing, gull-pecked, maggot-infested wounds -- achieves a rough, uncompromising beauty.

Gary Krist is the author of the novels "Bad Chemistry" and "Chaos Theory."