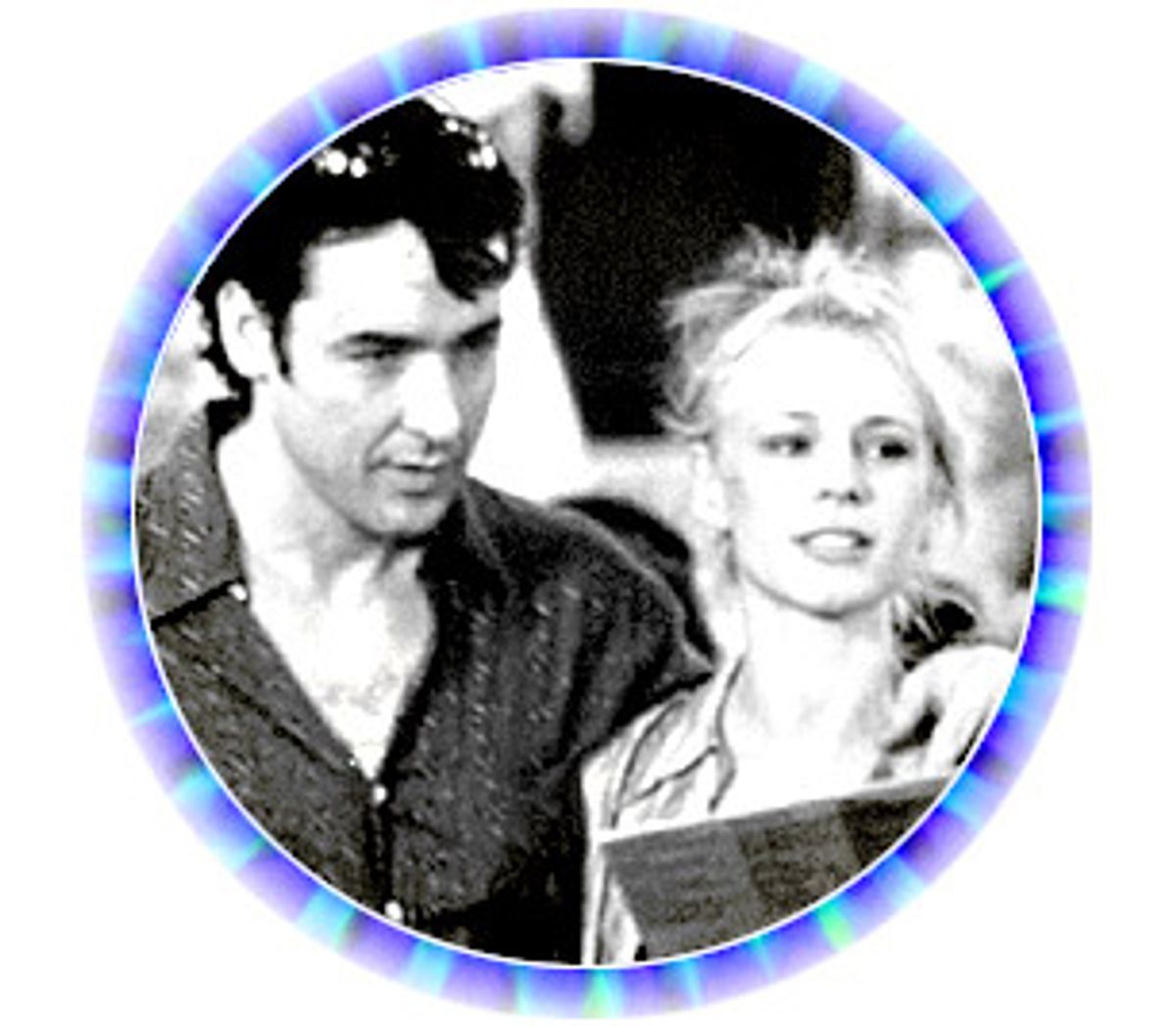 When a book develops a pop-culture following the way Nick Hornby's "High Fidelity" did, you can bet there are going to be thousands of people out there holding their breath, hoping that the movie version will somehow measure up to the source material.

They can breathe easy. Stephen Frears' adaptation of Hornby's 1995 novel is spiritually faithful, despite the fact that the setting has been moved from London to Chicago. Anyone who's ever been, or even just known, a record geek can tell you that love of vinyl knows no geographical boundaries. And besides that, "High Fidelity," like the book it's based on, is essentially a story about the overwhelming power of pop culture -- not just the way it can illuminate every element of our existence but also the way it can cloud our judgment. Pop music can be like a prism hanging in the window, a gorgeous little thing through which everything in life is filtered. But it can also be an excuse for never leaving the couch to actually live, and Frears, like Hornby, is acutely aware of that.

Rob (John Cusack) is one of those guys who know they can't live on the couch -- not all the time, at least -- which is why he runs a marginal, but mostly just really cool, record store called Championship Vinyl, on a Chicago side street that doesn't get much foot traffic. Rob's the kind of guy for whom music is everything, and with that unrepentant certainty comes a kind of snobbery. He and his two even geekier employees, Barry (Jack Black) and Dick (Todd Louiso), spend their days tormenting customers and making top-five lists. To hear them talk you'd think their lives were nothing more than endless tangles of lists: their top-five movies, their top-five records about death, their top-five opening album tracks. Rob even has a list of top-five breakups, and the story opens with his split from girlfriend Laura (Iben Hjejle) just cracking it -- she's left him for ponytailed New Age drip Ian (Tim Robbins, in a small but highly amusing role). Rob mourns the breakup by trying to figure out why he can't keep a relationship together, tracking down every girlfriend who ever spurned him and discovering in the process that in some cases he had been the one to do the spurning. And he also plays records. Lots of them.

"High Fidelity" is less a story with a real plot than a snapshot of that hazy, miserable time just after a breakup, when things are horrible, when you realize that everything about you needs to be reassessed and when, if you're that kind of person, you need to play a lot of records. It's the kind of picture that rides on the strength of its writing and its characters, and even though Frears occasionally lets the pacing go a little slack, for the most part the story hums along pleasurably. That's due in part to the casual, easygoing sharpness of the script, an ensemble effort by D.V. DeVincentis, Steve Pink, Cusack and Scott Rosenberg. There are plenty of wiseacre jokes, as when Barry makes a crack about a seen-better-days pullover that Rob's taken to wearing, calling it a "Cosby sweater." But the bons mots are never suffocating or tiresome, tempered as they are by the occasional tender moment: At one point Rob gathers up some clothes Laura has left behind and inhales their scent. He can't help following the gesture with a bitter quip about how girls always save their best underwear for the times they know they're going to get laid and wear the tatty stuff the rest of the time. But then, this is a guy who's just been dumped.

Every single actor here rises to the occasion. Joan Cusack, as a friend of Rob and Laura's who's caught in their crossfire, shows off her usual whip-smart timing. Black is almost too painfully accurate as the most annoying species of record-store geek, the kind who's sure he knows everything and who'll cut you down for inaccuracy if you happen to wrongly (or even rightly) add "the" to a song title. Hjejle's Laura is supremely likable: She's so matter-of-fact and grounded that it's perfectly clear why she'd become exasperated with a guy like Rob, who perpetually refuses to grow up, but you can also see how her patience and calm are exactly the things he needs. And Louiso's Dick, as the kind of timid, soft-spoken music nerd who'd take a sword through the heart in defending a Belle & Sebastian record, practically creeps away on his plimsolls with the whole movie. Prematurely bald, he resembles the old comic-strip character Henry, only with tons more charisma. His walk is like an understated, tentative march: Just watching him stride, his shoulders hunched, his arms dangling haplessly out of his short, thrift-shop shirtsleeves, you feel you're seeing a marvel of subtle characterization. (And at the risk of giving too much away, I nonetheless find it imperative to mention that he finds a nice girlfriend.)

And Cusack, as he did in last year's "Being John Malkovich," proves he doesn't necessarily have to play the nicest guy in the room. He's always been such an incredibly winning actor -- his Lloyd Dobler in "Say Anything ..." represents the epitome of all there is to love about him -- that in the past few years it seemed as though it might be a good idea for him to cut some sharper teeth. His Rob has just the right amount of bite: Cusack is a sly enough actor to let us see that for all Rob's moaning and groaning about the way women have treated him, he's got a bad case of lost-boy syndrome, and as far as love goes, his brain is so muddled that he wouldn't be able to spot his perfect Wendy if she were standing in front of him.

While Rob is quick to chide his employees for their music snobbery, which often seems to be merely an excuse to mock customers, he's got a bad streak of it himself. In one scene, he stands by, amused, as Barry refuses to sell a rare Captain Beefheart LP to a customer who's practically begging for it, only to turn around and offer it to another customer for a measly 40 bucks. When it comes to love, Cusack is terrific at that lovesick gob-smacked look: It really kicks in as he gazes at Catherine Zeta-Jones, as his college girlfriend Charlie -- his eyes become so liquid you could swim in them. But he doesn't use that look to endear himself to us, or to seduce us, as much as he does to signal Rob's romantic cluelessness. He may be smitten, but it's a shallow, cowardly kind of regard -- the kind you reserve for the most desirable prize of a girl, not necessarily the one who can bring out the best in you.

"High Fidelity" has plenty going for it: The acting is great, the jokes are funny, but oh! the music. The songs are so well chosen -- never the most obvious choices, but always interesting ones -- that they sometimes catch you up short. In an early scene, Dick starts out his morning at the store by putting on Belle & Sebastian's lovely, mournful "Seymour Stein," only to have it snapped off by Barry, who insists on hearing Katrina and the Waves' "Walking on Sunshine." Later, Rob tells his co-workers that he's going to sell five copies of an obscure band just by playing one striking track, and sure enough, we see a store full of guys with dubious facial hair suddenly bobbing their heads and asking, "What is this, man?" Rob, Dick and Barry's obsessiveness is the movie's constant gag, and yet it's never in doubt how much pleasure they get from the music. You can't blame them for wanting to have a soundtrack for their lives; life would be way too quiet without it.

But it may be the constant presence of music, more than the actual thing itself, that gives "High Fidelity" its real shape. The store (which was built lovingly on a soundstage, and includes albums from DeVincentis' own collection) looks like a veritable Candyland for pop-music addicts; given the choice between visiting either of two mythical lands, I'd take Championship Vinyl over Oz any day.

There's also a touching kind of earnestness in the way Rob lovingly cleans 45s with a Discwasher pad as he tells us his tale of woe, or in the way he declares that, yeah, he's read "The Unbearable Lightness of Being" and "Love in the Time of Cholera" -- but "Cash," by Johnny Cash, is his favorite book. Or in the way that Rob, Dick and Barry, all smitten with a sexy lounge singer (the effortlessly alluring Lisa Bonet), each fantasize aloud not about sleeping with her but about the much-more-elusive pleasures that being romantically involved with her might bring: Rob wonders if she might someday write a song that would include one of their little in-jokes; Dick muses that maybe she'd include a picture of him on the sleeve of her next CD, nothing elaborate, just something blurry in the background.

And when Rob at one point quietly declares his love for Charlie Rich's "Behind Closed Doors," you recognize that for all his snobbishness, for all his annoying waffling on issues of commitment, his heart beats true. It may be wrong to use pop music as a kind of shield to protect you from experience, but it seems wholly healthy to view it as a romantic training ground, a place where all kinds of hopes and desires are dreamed about, obsessed over, test-driven. As the Beatles once sang, "There's a place." "High Fidelity" tells us where it is: right in the groove.