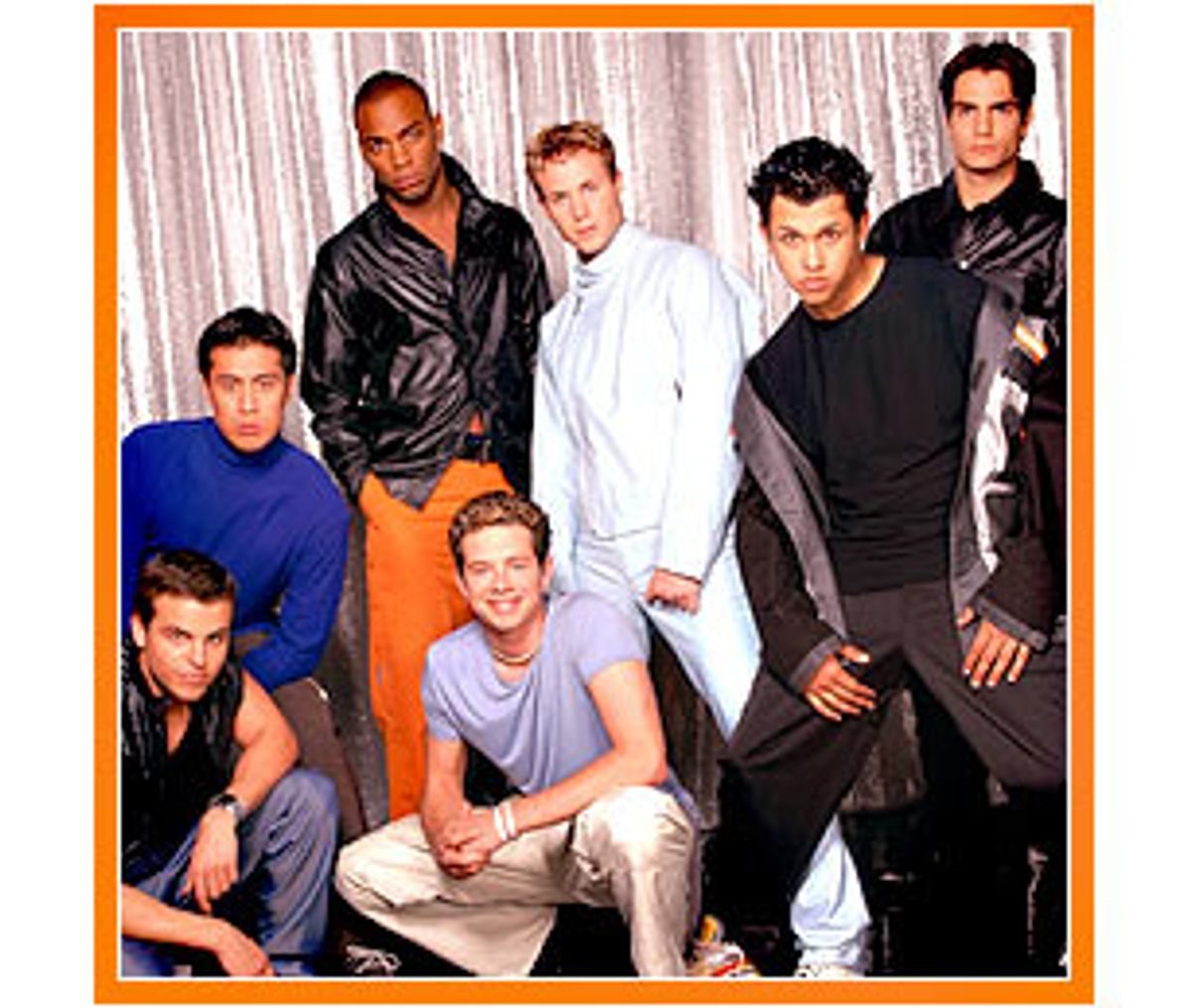 In "Making the Band," the new ABC reality series, a boy band is created right before our eyes. And what are little boy bands made of? Snips and snails and puppy dog tails -- and Backstreet Boys harmonies, 'N Sync dance moves, Tommy Hilfiger cargo pants, floppy basketball jerseys, pierced ears, hair mousse, chiseled cheekbones and the bitter tears of a record-label executive who just lost his biggest meal tickets.

The executive is Lou Pearlman, the middle-aged, apple-shaped impresario of Orlando's Trans Continental Records and mastermind of the Backstreet Boys and 'N Sync. Both groups no longer work for Pearlman, both having left after suing him over financial disputes. (The cases were settled out of court.) "Making the Band," from the creators of MTV's "The Real World," will follow the shaping of Pearlman's latest boy band, O-Town, as it makes a record, goes on tour and lives communally, "Real World"-style, in a rambling, lakefront Orlando, Fla., house. (The premise sounds an awful lot like that of "Pop Stars," a recent Australian TV series that followed the creation of a new girl group.) In the March 24 premiere episode, young Backstreet/'N Sync wannabes auditioned for Pearlman in casting calls held across the United States. Twenty-five guys were chosen to fly to Orlando for further scrutiny; that group was then winnowed down to a rainbow-hued finalist pool of eight, amid many tears, group hugs and a cappella choruses of "Amazing Grace." It was like watching a cross between a beauty pageant and the NCAA tournament of wusses.

As guilty pleasures go, they don't come any more car-wreck fascinating and unintentionally hilarious than "Making the Band." There have been countless boy-band parodies, like the devastating Ben Stiller-Andy Dick spoof that opened the MTV Video Awards a couple of years ago and the recent, disappointingly lame MTV movie "2-Gether." But all of them pale before the giddy "unrehearsed, unscripted, unknown" reality (or so the ads say) that is "Making the Band." The audition episode was a scream, as (mostly white) young men with varying degrees of talent performed phat dance moves and over-soulful renditions of "The Star Spangled Banner" while Pearlman, a bespectacled, Scoutmasterly man incongruously given to hep phrases like "Yo, yo yo," and "Wha's up," intently sized them up.

Is it cruel to laugh at people reaching for a dream? Well, yeah. But, admit it, that's why shows like "Making the Band" and "The Real World" are so popular; creators Mary-Ellis Bunim and Jonathan Murray understand that for a voyeuristic series to be any fun, it must make viewers feel vastly superior to the dippy exhibitionists they're observing. Besides, as cruel as it may be for us to goof on the boys who would be O-Town, it can't possibly be as cruel as when a Pearlman aide burst into laughter in the middle of one tone-deaf guy's audition.

As "Real World" viewers know, the hallmark of any Bunim-Murray production is the dramatic tension arising from diverse housemates in close quarters. And sure enough, there is trouble on the O-Town horizon in the form of envy, personality clashes and prima-donnaism. How much of "Making the Band" is manipulated by the filmmakers? Given their track record with "The Real World," do you have to ask? But, the thing is, it really doesn't matter in this case; brainless artificiality is such a major part of boy bands -- and of today's intensely commodified pop scene in general -- that it's pointless to try to figure out what's real about O-Town and what's fake. It's all fake, to a certain degree. Which gives us all the more reason to sit back and laugh.

But as enjoyably cheesy as I'm finding "Making the Band," one question nags me: Don't these guys realize how silly they look? Why would a grown man -- assuming that you can consider 19- and 21-year-olds "grown men" in these days of elongated adolescence -- want to be in a boy band anyway? Imagine the life of a Backstreet Boy, getting dissed by everybody over the age of 14, prancing around in a shopping-mall-dilution of rap poses, having to do all those fabulous Michael Jackson-imitates-Bob Fosse dance numbers while wearing thick-soled, clunky Doc Martens -- why bother?

Oh, I suppose the money and fame would go a long way toward easing any low-self-esteem issues and physical discomfort arising from boy-band success. And there's also the soothing prospect of using one's boy-band experience as a steppingstone to solo stardom (like former Menudo member Ricky Martin) or an acting career (like 'N Sync's Justin Timberlake). And then there are the traditional perks of pop stardom, like the chicks and the parties, to which two O-Town finalists fall victim in the coming weeks. I'm not sure chicks and partying really figure into the equation where the Backstreet Boys and 'N Sync are concerned, though; it's hard to do those dance steps if you're falling down drunk, and as for chicks, well, there are tabloid headlines to consider. Of course, the million-dollar question is, How many of these boy-band members are really gay? But nobody's talking, because such a thing would be very bad for business, if your business happens to be making little girls dream about marrying you.

But, jeez, even if you are only in it for the money, there has to come a point where you see a tape of yourself onstage doing your dorky suburban homeboy break-dancing moves and you suddenly realize just how ridiculous Michael Jackson's act looks on men who aren't Michael Jackson. Or, maybe not: What if boy bands, so emblematic of our shut-up-and-keep-shopping culture, are genuinely incapable of such brutal self-awareness? After all, Pearlman's boy bands are based in Orlando, home of Disney World, the Happiest Place on Earth.

Now, before I start getting angry letters from fans, let me say that I actually like the Backstreet Boys; I'm a sucker for a well-turned pop single, and you couldn't find a better one last year than "I Want It That Way," with its luscious star burst of harmonies and dreamy, rolling chorus. Mmmm. I can deal with the Backstreet Boys' music -- it's the pantomimed passion, the eager embrace of the promotional machinery, the baby-butt softness of these boy bands that bugs me.

Sure, O-Town is not the first boy band manufactured via a TV series. But even the Monkees understood that pop music couldn't be divorced from interesting wrinkles like rebellion, sex, badness; they wanted the chicks and the drugs and the street cred of the big boys in the real rock bands, and it eventually destroyed them. Alas, it's a different world now. The members of 'N Sync, for example, suggestively pump their pelvises, but wear "What Would Jesus Do" bracelets, copies of which they toss out to fans at their concerts; apparently, neither the band members, nor their fans, see the contradiction. (Coming soon, the dreamiest boy band of all -- Jesus and the Disciples!) Of course, Elvis Presley was a religious man, too, but not only was he aware of the contradictions, he got off on them.

But 'N Sync, the Backstreet Boys, O-Town (and Britney Spears and her underage clones too) are part of the creepy Disneyfication of pop -- and pop sexuality. They're like automatons from some Disney World "history of rock and roll" pavilion, where sex is infantilized, "the devil's music" is wiped clean of sin and history is rewritten to begin with Michael Jackson, who racked up so many album sales during the '80s that everybody was willing to overlook the fact that he was, um, a little weird. "I wanted to be like Michael Jackson ever since I saw 'Captain EO,'" gushed Jacob Underwood in the "Making the Band" pilot. Here's something to ponder: To the 19-year-olds in these boy bands, who danced to their mommies' "Thriller" albums when they were toddlers, Michael Jackson is Elvis.

What a surprise, then, that "Making the Band" seems more interested in sneakily deconstructing the boy-band genre than in breathlessly plugging it. For one thing, the filmmakers let us see just how dehumanizing this boy-band star-making process is. The first episode had a startlingly ironic segment where several auditions were shown at the same time on a split screen, all of the guys singing the required piece of music -- 'N Sync's "Tearin' Up My Heart" -- and all of them mimicking the original in exactly the same ways. The O-Town contenders' interchangeability was further underscored when the eight finalists showed up late for their first session with a vocal coach, and were reprimanded for their tardiness with a tart, "You can be replaced, quickly."

Under the inescapable gaze of the "Making the Band" cameras, the members of O-Town are shown being groomed like debutantes, but treated like schoolboys or assembly-line workers (or slaves); they're simultaneously rewarded and humiliated for their lack of individuality, their pretty facelessness. The same tactic worked with the Backstreet Boys and 'N Sync -- for a while. But, you have to figure that by the time O-Town finds the cojones to mutiny against Pearlman, he'll already have his next big thing waiting in the wings.