Nobody captured the game at midcentury like the man whose pen was as mighty as Joltin' Joe's bat. 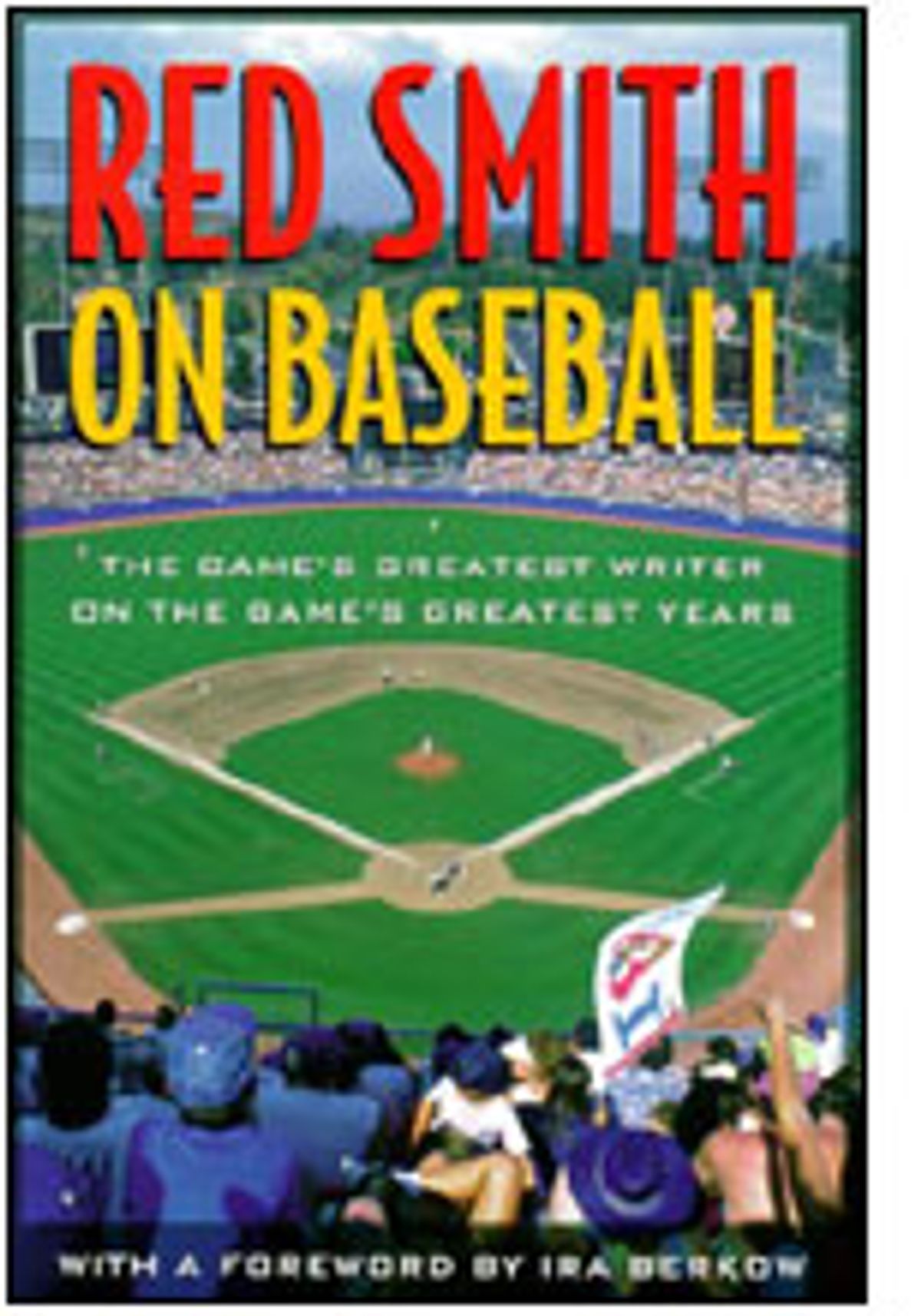 In the middle of the century, Red Smith
was to sportswriters what Joe
DiMaggio was to center fielders. As
New York Times columnist Ira Berkow
writes in the foreword to "Red Smith on
Baseball," Newsweek put the columnist
for the New York Herald Tribune (and,
later, the Times) on its cover in 1959
with the headline "Star of the Press
Box," and he was often referred to as
the Shakespeare of that smoky structure.

Berkow also tells us (and there's no
reason not to believe Berkow, himself a
typist of the first order) that baseball
was Smith's favorite sport: hence this
collection of columns, subtitled "The
Game's Greatest Writer on the Game's
Greatest Years" -- both arguable points.

It's tempting to just fill this review
with quotations from Smith's writing by
way of illustrating what the Pulitzer
Prize folks called his "erudition,
literary quality, vitality and freshness
of viewpoint" when they laid the overdue
laurels on him in 1976. I found myself
marking particularly lively passages
with a pencil. From 1941, the date of
the first column, through the early
'50s, my copy is a mess of No. 2 lead.
After that, the pages are considerably
cleaner: In those years Smith lost some
of his edge and settled in as just a
very good sportswriter, if one who
reminisced a bit too much about the old
days and relied a little too heavily on
sarcasm.

"Now it is done," reads the famous lead
of his Oct. 4, 1951, column on Bobby
Thomson's "Shot Heard Round the World,"
the home run that won a three-game
playoff and capped the greatest comeback
in baseball history, when the New York
Giants, who'd been hopelessly out of it
in mid-August, rallied to overtake their
arch-rivals, the Brooklyn Dodgers. "Now
the story ends. And there is no way to
tell it. The art of fiction is dead.
Reality has strangled invention. Only
the utterly impossible, the
inexpressibly fantastic, can ever be
plausible again."

A week later, the Giants had lost the
World Series to the New York Yankees,
who were taking their third of what
would be five straight world
championships. (Smith wrote that rooting
for them was like pulling for U.S.
Steel.) "Magic and sorcery and
incantation and spells had taken the
Giants to the championship of the
National League and put them into the
World Series ... But you don't beat the
Yankees with a witch's broomstick. Not
the Yankees, when there's hard money to
be won."

Ah, what the hell. I have a couple of
beefs, but first:

Smith on Dodger Cookie Lavagetto's
game-winning pinch double in the 1947
World Series: "After 136 pitches, Floyd
Bevens, of the Yankees, had the only
no-hit ball game ever played in a World
Series. But he threw 137 and lost, 3 to
2."

On Stan Musial: "He is the best left
fielder the Cardinals have, the best
center fielder they have, the best first
baseman they have. He is, in short, the
best ball club in St. Louis and one of
the best in the world."

On DiMaggio: "Sometimes a fellow gets a
little tired of writing about DiMaggio;
a fellow thinks, 'there must be some
other ball player in the world worth
mentioning.' But there isn't really, not
worth mentioning in the same breath with
Joe DiMaggio."

Remembering Jackie Robinson on his death
in 1973, Smith wrote that the picture
that stuck in his mind was a game-saving
diving catch Robinson made on the last
day of that fateful '51 season: "The
unconquerable doing the impossible."

He liked to go into an ironic formal
tone when writing about the scruffy
tobacco-chewers who populated the game,
so a Phillies second baseman is "Mr.
Babe Alexander, of Philadelphia," and
Yogi Berra and Casey Stengel are usually
Lawrence Peter Berra and Charles Dillon
Stengel. Uniforms are "flannel rompers,"
the game is "rounders," players are
"wage slaves" or "employees" or, if
they're well paid, "capitalists."

But it wasn't just the wordplay that
made Smith special. He was a keen
observer, too. As early as the 1940s,
for example, he was predicting that if
the players could ever organize
themselves into an effective union, they
would take over the game from the
shortsighted, ineffectual owners -- a
development that came to pass three
decades later.

So here's the beefs: This book will
probably be read only by baseball fans
(which is a shame, because anyone
interested in good newspaper writing
will find plenty to snack on), so the
lack of explanatory notes isn't a huge
oversight. Still, they would have helped
explain some of Smith's offhand
references to baseball events and people
that a casual fan in, say, 1948, would
have recognized at once, but that are
head-scratchers today.

Much worse, the book's cover is, to
paraphrase Smith paraphrasing Babe Ruth,
an adjectival bonehead play, an
indelicacy mistake. It's a lovely
picture, taken from the upper deck, of a
ballgame being played on a sunny
afternoon -- at Dodger Stadium in Los
Angeles. Here's Smith in 1957: "The
departure of the Giants and Dodgers from
New York is an unrelieved calamity, a
grievous loss to the city and to
baseball, a shattering blow to the
prestige of the National League, an
indictment of the men operating the
clubs and the men governing the city."
It was, he wrote, "the boldest step
backward since the league was born in
1876."

They couldn't have found a nice color
picture of Ebbets Field or Yankee
Stadium in the '50s? Whoever chose that
photo was having, as Red Smith might
say, a bad day with the old medulla
oblongata.

DO NOT USE. use king kaufman byline and bio.