My heart aches for what I can't have

My daughter's boyfriend is the man of my dreams. 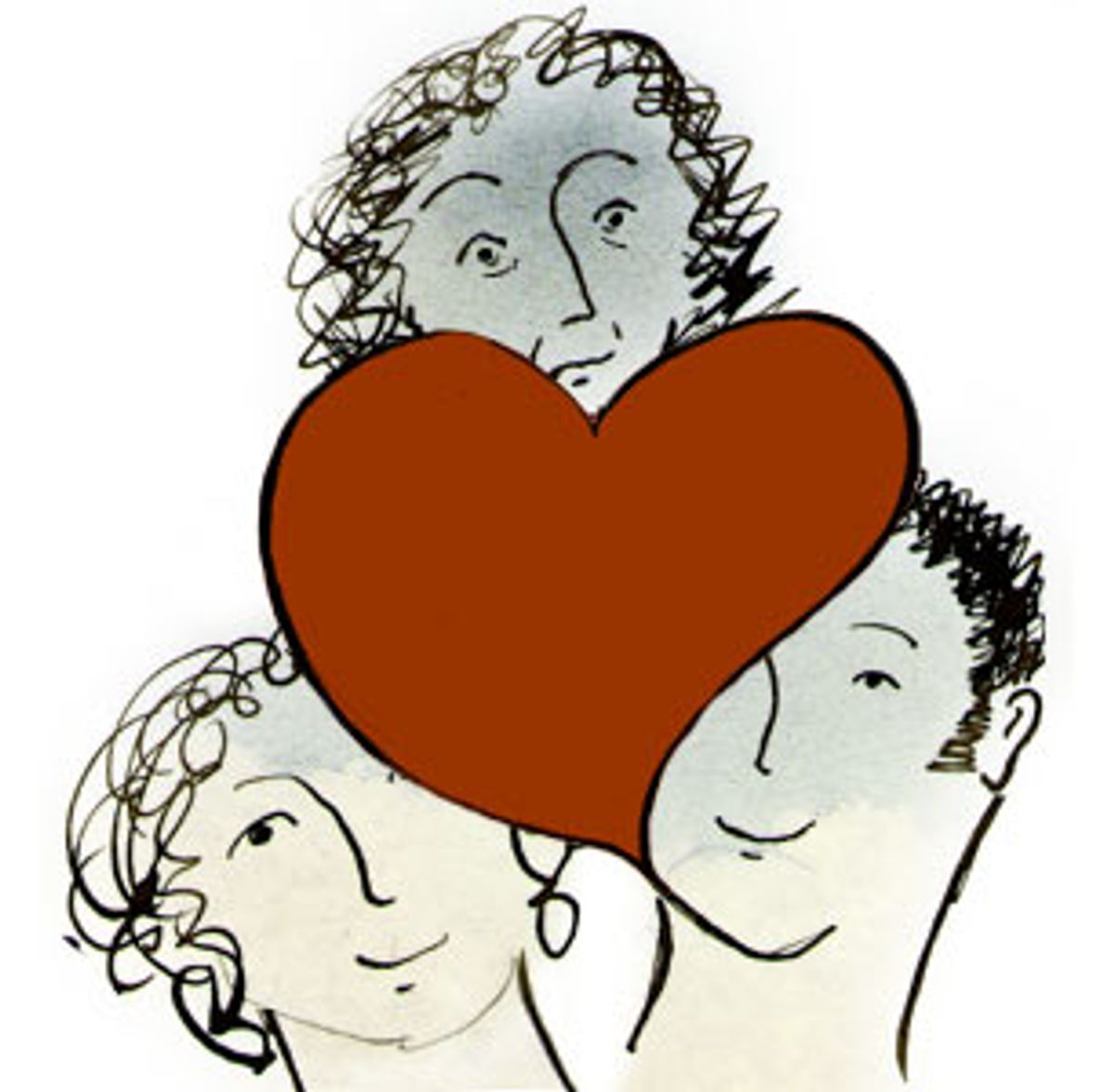 I see the movie.

Susan Sarandon plays me, the mother. Christina Ricci plays my daughter. I can't decide who plays the boyfriend. It would have to be either Jude Law or Jack Davenport. Ralph Fiennes would be perfect, but maybe he's a bit old for the part.

It is great cinema. Mother and daughter are best friends, mother has been in one of those ordinary, chilly marriages for 25 years, daughter meets the man and brings him home. Mother is struck by something best described as unseemly. Sort of "The Graduate," mostly not.

It is a movie currently showing in my house.

My darling daughter and I are truly best friends, just as I was best friends with my mother. She's 21. I'm 52. Earlier this year, upon returning to university after her vacation, she met a man who fell in love with her as she fell in love with him. I've never seen her so happy -- or beautiful. She has been walking about with that dreamy, intoxicated "in love" look for some months now. She has had other boyfriends, but this time, she tells me, it's different.

When I meet him I believe her. He's a few years older, is doing postgrad work and actually seems to have the wit and intelligence to match hers. And then there are his looks. He's not drop-dead handsome like the man I married 25 years ago; he has something more refined. It's an infinitely masculine tenderness that is far more seductive than a purely handsome face.

And he's like this because he likes women. You need time to take that in, because a lot of men say they like women, but what they mean is that they like being with women or that women make them feel good. But this man really, really likes women, likes the line of female thoughts as much as he obviously -- but delicately -- likes the line of female bodies. He listens to them and takes them in. It's very, very rare.

And because my daughter and I are close, she tells me that she's never had a lover like this man. I don't want to know the details, but I gather she has entered a world of fulfilling sensuality. It's a world I only know about because I've read about it in books.

As I said, he loves my daughter.

So seeing this man and my daughter together triggers the most complicated emotion in me. I share her happiness and take perfect delight in it. At the same time their young exhilaration is an acute reminder that all of this is over for me. Of course people fall in love again after 50, but it will never have the edge, the glory, of that youthful first real love.

And when I look at them, when I catch the way their eyes meet or their hands touch, I can't recall ever having had such love. My loves were always carried by an undercurrent of such anxiety that I couldn't just enjoy them. But then, I don't think there were men around like my daughter's boyfriend when I was young. I'm sure there were not. Thirty years of feminist mothering has produced a new man.

But what is embarrassing about all of this is that the new man my daughter has fallen in love with is exactly the man I would fall in love with.

A few months ago, I was having a conversation with a younger woman about sexuality and female fantasy. I denied ever thinking lustfully about men I met. She didn't believe me. I remember her asking in total disbelief, "But don't you ever look at a man's mouth and think about how it would feel to ..." And I remember firmly shaking my head and replying, "No. Never."

Never until the night my daughter's boyfriend came to dinner. I've never had such thoughts about a man before. I can't remember ever feeling such desire. Well, I can but that was in adolescence, when I used to dream about men I didn't know, men I would see now and then, men I would certainly be too afraid to speak to. They were all before I'd even had a date with a real man, just my fantasy of some mysterious essence of man.

And now, 40 or so years later, a real live essence of man appears in my life -- as my daughter's lover.

Not that there's anything to worry about. I've told my daughter that I find him fantastically desirable, but, on pain of death, she is never ever to mention this to him. Why? Oh, there are many reasons, and one of these is the sheer embarrassment of it all. I would simply die if he ever knew how I felt about him because I recall only too keenly what it was like to be desired by older men when I was young. It wasn't flattering; it wasn't even embarrassing. It was mainly sad because it was so inappropriate.

A couple of these men I really liked: One, a teacher, I even loved. I had no real understanding of what it was they felt for me but I knew it disturbed me and made me uncomfortable. When it was declared, things were never the same between us.

"How could old people feel this way about me?" I thought. It was because when you are 20, 50 is old. Now that I am 50, I know desire is just as strong and probably a hundred times more poignant because you know how precious it is.

If this were a film, and if I did look like Sarandon, perhaps something might happen. But this isn't a film, and although I look good, I don't quite make it into the Sarandon category. Women my age are allowed to be attractive and allowed to be desirable, but no matter how we fool ourselves, we are not desirable to younger men. And when we do become deluded about these things, the intelligent film becomes a cheap talk show gig.

One look at my lovely daughter is enough to remind me of my own limited charms. One look and I know that nothing will come of this story except happiness for my daughter and her boyfriend -- and, for me, a certain perverse pleasure and melancholy in the fact that I can still feel such extraordinary yearning for something I can no longer have.

Clea MacAllister is a pseudonym for a journalist currently working in Australia.