The British prime minister can't decide whether to take paternity leave. His unborn child weighs in.

By As told to Elkan Allan 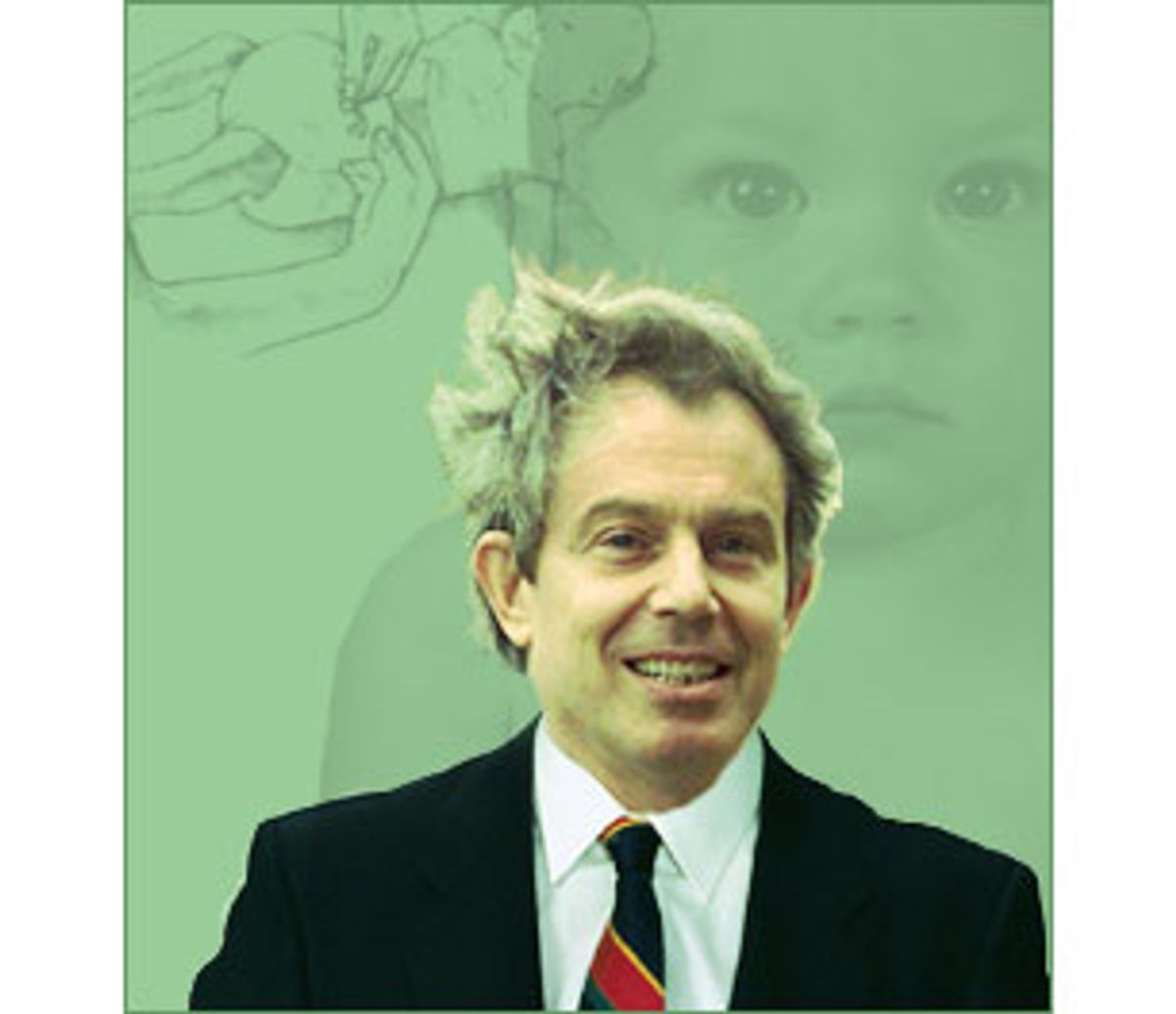 I'm not looking forward to May 24. It's the day I am scheduled to be untimely ripp'd from my mother's womb like Macduff and Julius Caesar (and certain babies in Hollywood) and then shoved onto the world stage. Most infants have only to charm their adoring parents -- me, I've got to bond with the whole of the United Kingdom.

Talk about pressure. I wasn't even a zygote before it started. Of course when Daddy happens to be Tony Blair, a prime minister up for reelection next year, this sort of thing is bound to happen. It was inevitable that his doctors (spin) should collude with hers (gyn) to make the most of me. Too bad their marketing skills are about as well-developed as my lungs.

First there was all the excitement about my existing at all, as Mummy is 45 years old. (Crikey, it's not like she's a 65-year-old Italian widow carrying test-tube triplets.) Then came a lot of titillating tabloid speculation over whether I was conceived on vacation in Italy or in France or back home in the prime minister's residence at No. 10 Downing St. (I, of course, have access to this information, which I will offer for no less than 30,000 pounds as soon as I am able to speak.)

Then, as gossip of a sexual nature began to die down, historians discovered I would be the first baby at No. 10 in 150 years. Someone else then pointed out that my family doesn't actually live there at the moment, but next door, as there is more room. Now it looks as though we'll be kicking out Uncle Gordon Brown, who's chancellor of the exchequer and the official resident of No. 11, from his apartment in our proper house so that I can move in. (Think "Noises Off" with lousy actors.)

Next there was great public tut-tutting followed by earnest medical reassurances when Mummy decided to fly off to Israel and various other exotic locales whilst pregnant. An embarrassing demonstration, I thought, of this country's hopeless traditionalism or desperation for news -- or both; I'm not sure as I haven't lived here long at all.

But all that was nothing compared to the kerfuffle about whether Daddy should take time off from being prime minister to help look after Mummy and me. They call it paternity leave, though Mummy refers to it as "a basic human right" and Daddy, privately, calls it "a bloody nuisance."

It all started with Mummy -- Cherie, a hot-shot attorney in her own right -- telling an interviewer that Mr. Paavo Lipponen, the prime minister of Finland, has twice taken paternity leave. She went on to say, "I, for one, am promoting the widespread adoption of his fine example," thereby reading Daddy the riot act and airing her elastic-paneled dirty laundry in public.

She'd been going on about it for weeks at home. "Tony, you didn't take one single day off when Euan, Nicky and Kathryn were born. I break my back reeling in female votes, which got you elected last time, and now, you ungrateful prat, you can't even take a few weeks off to be with us and bond with the baby, not to mention change a few nappies -- FOR ONCE!!"

It's usually about this time that Daddy interrupts in his best, deeply concerned, leader-of-his-country mode and says how impossible it would be for him to take four weeks off, at which point Mummy says that four weeks is the absolute minimum and then, just to put the fear of God in him, she usually mentions that female members of Parliament are currently agitating for minimum male paternity leave of 13 weeks.

Then Daddy says that his polling shows that only 2 percent of men would take up the option for even one week, let alone 13, and Mummy says that's because it's unpaid leave and you would still get your salary. And Daddy says, "Yes, and what an outcry there would be then," and Mummy says, "Give it to charity or whatever you want, but I want you here with me even if you are a spineless wanker."

And then they don't talk at all for a long time.

It all really heated up a couple of weeks ago, when Daddy was interviewed by the BBC and was asked if he had decided to take paternity leave.

"To be completely honest," said Daddy, "I haven't thought about it properly yet. I know I should have and I am sure I will. I will decide in the next few weeks. I know I have got to decide soon. Of course there's a strong case for paternity leave but I've got to make sure that the country is properly run, too."

At which point the interviewer, Mr. John Humphrys (whose wife also is pregnant, and he's not taking any leave), nailed Daddy by asking, "Don't you have confidence in your deputy, then?"

Mum blew tea out her nose laughing as Daddy spluttered, "It's not a lack of confidence in anyone. I just haven't made up my mind."

The dithering idiot! I thought he had more balls than that. I am, of course, proof that he has them, but are they big enough? Here I am, a vehicle, naked and pink, ready to bear my Daddy dearest over this nasty patch of politics he's in at the moment -- Northern Ireland going down the drain, the London mayoral election going to hell and everyone saying he's just a lapdog of the Americans. Use me! Abuse me! Everybody knows that any git with a baby scores major points with the ladies -- even if the git in question has too many teeth and a bad haircut. I am -- even now -- a vote magnet.

Take Uncle Bill Clinton, a chap who knows how to please the fair voter. Asked his opinion of the paternity leave hoopla, he said, "I am envious. He should take paternity leave." Daddy said that's easy for him to say, given that his wife won't sleep with him anymore. Mum threw a saucer at him.

As this point, it may not matter. Daddy is starting to look like a lout and Mum is drawing up a contract for a new nanny. (This one will include a banishment clause for tattling, since our last nanny came this close to selling a tell-all about life among us.) I will have been vanquished in my pursuit of the young, blessed-with-children and female voters, a loss which may haunt Daddy for the rest of his days.

I spit up on his shoulder! I wee on his tie! He has robbed me of in-utero greatness (and the vision of Maggie Thatcher spinning in her grave -- if only she were dead).

So, in June, will Daddy be downstairs at his desk or upstairs with us? My guess is that he'll fudge it. He'll tell the media that he is taking a week or two off, but privately he'll expect Uncle John Prescott, who is supposed to be his deputy, and Uncle Gordon, who'll actually run things, to keep popping to see me -- and him. Someone will find out he's still on the job and he'll be toast with all concerned.

Frankly, I'm not at all sure that I want him around, trussed in apron strings and whining about his "duties." He's hardly a great role model these days. And if he's as cackhanded about changing nappies as he is about running the country, I don't want him near my brand-new bum.

Mind you, if I had to wager a couple quid on it, I'd say he'll do it. It's either that or more bonding than he bargained for after the election. I'll still be in nappies and he'll be out of office -- with plenty of time, and poo, on his hands.


As told to Elkan Allan

MORE FROM As told to Elkan Allan