"Men in the Off Hours" by Anne Carson

The poet's breathtaking fourth collection takes in the picnic of sex and love and death that time spreads in its wake. 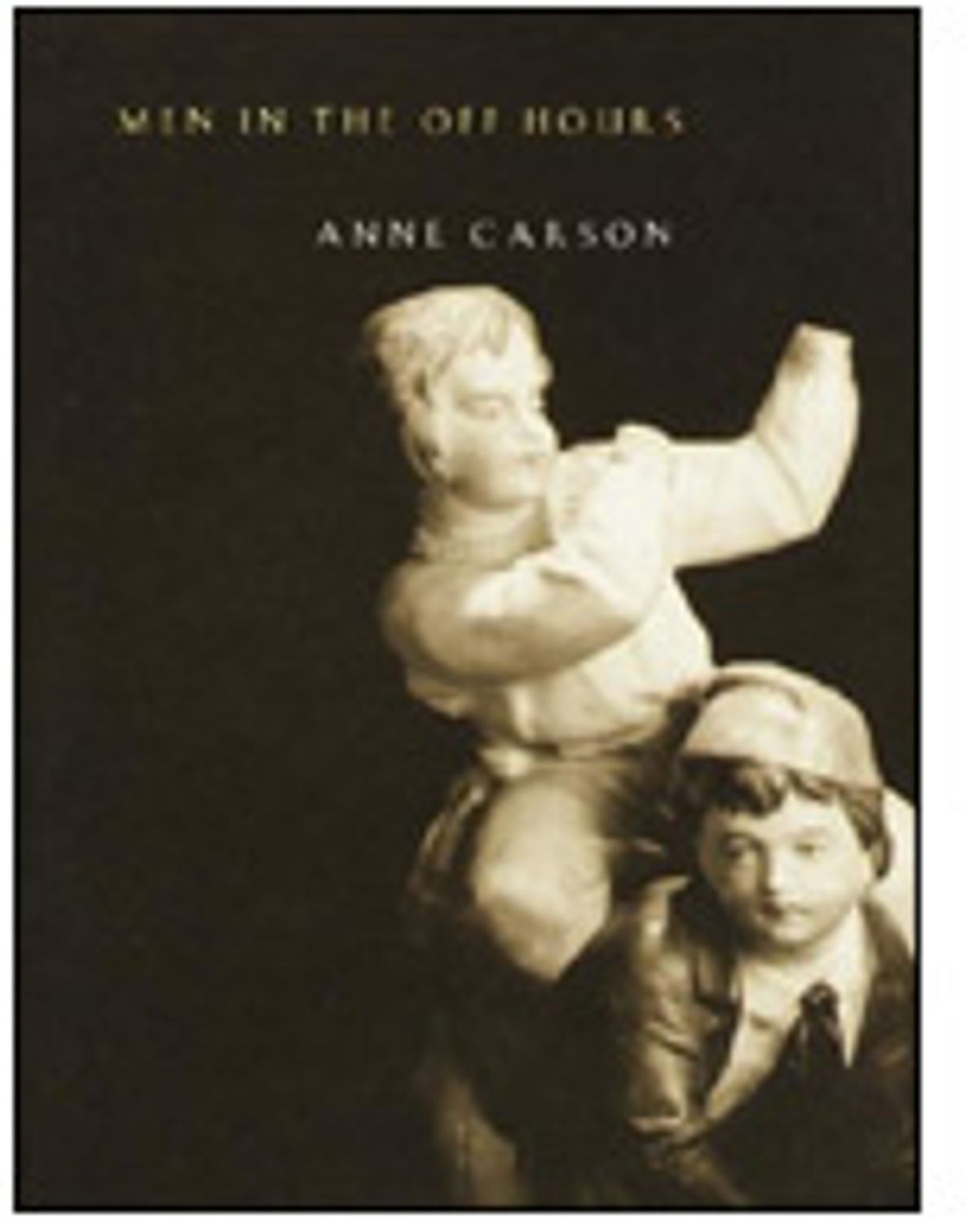 Anne Carson, the Canadian poet who has been called "a philosopher of heartbreak," drops a clue to the preoccupation of her fourth collection of verse, "Men in the Off Hours," in a poem titled "New Rule." Here, as elsewhere, she refreshes a couple of lines from one of her earlier books:

Not enough spin on it, said my true love

When he left in our fifth year.

In her 1995 collection "Glass, Irony and God," Carson wrote:

Not enough spin on it,

he said of our five years of love.

There and in "Plainwater" (also published in 1995) -- which opened with a poem called "What Is Life Without Aphrodite?" -- as well as in her 1998 novel in verse, "Autobiography of Red," the emphasis was on the erotics of human interaction, the "love" that ends that couplet. In her new collection, though, the brilliantly inventive Carson has tipped her scale toward the secondary element in that earlier reflection on eros: Much of the book is a sui generis meditation on time. But it's impossible for Carson to divorce herself completely from a thematic territory she has previously made so startlingly new, and so "Men in the Off Hours" encompasses all of that picnic that time spreads behind itself: life and sex and love and death.

It's appropriate that Carson should allow her mind to rest on the notion of time -- subjective, linear, collapsing, cinematic -- for she is a classicist with a rare ability to invigorate figures and themes otherwise relegated to the dustbin of history. Her opening gambit is a prose essay that throws together Thucydides, the historian of the Peloponnesian War, and Virginia Woolf, who "stays in her own time" as she records the beginnings of World War I in her essay "The Mark on the Wall." "How people tell time," Carson observes, "is an intimate and local fact about them."

Later in the book, she revisits Thucydides and Woolf in the sequence "TV Men," wherein Thucydides is the director to Woolf's actor/narrator, who questions her character's motivation and delivery on the set of a documentary version of (of course) "The Peloponnesian War." In another wildly imaginative juxtaposition, Carson pins gritty narrative illuminations of the paintings of Edward Hopper to the epiphanic "Confessions of Saint Augustine." This droll poetic sequence, titled "Hopper: Confessions," begins with a quotation from the artist: "I hope it does not tell an obvious anecdote for none is intended."

Carson further illuminates her investigation of time in "Essay on What I Think About Most," in which she breaks open the Aristotelian theory of metaphor (something "that causes the mind to experience itself/in the act of making a mistake") as if it were a loaf of bread. This gift for surprise -- the ability to fling together the strangest ideas, phrases and words and make them resonant and memorable -- is at the center of Carson's genius:

There is something you should know.

And the right way to know it

Is by a cherrying of your mind ...

The way to know it

Is not by staring hard.

In another poem, she writes:

Were fragile, the wind

Could dash them away.

Carson, like Sylvia Plath, has the Dickensonian ability to make words, in their simple particularity, astonishing.

In this sense, her poetry can be contrasted with the masterworks of John James Audubon, the premier American ornithological artist and the subject of one of the most traditionally structured yet most biting poems in the collection. Audubon, Carson notes, created a new method of painting he called "drawn from nature," meaning that he depicted birds after he'd shot them, stuffed them and wired them in realistic poses in his studio: "You can look at these true shapes all day and not see the bird," she notes coolly.

You can, however, see the resuscitated Lazarus as Carson evokes him in his "Shooting Script" section of "TV Men," one of the most breathtaking passages of poetry to appear in years -- a perfect illustration of Ezra Pound's dictum "Make it new." Perhaps only the frescoes of Giotto have done a better job than Carson's poem of bringing Lazarus back to life:

although he pulls against it and groans to turn away --

with a whistling sound behind him


and his soul congeals on his back in chrysolite drops

which almost at once evaporate.

(someone is calling his name) -- his name!

And at the name (which he knew)

not just a roar of darkness

crushing him backward into the rut where he lay

under a pile of furniture.


Fresh and surprising, too, are the 12 sections of "TV Men: Tolstoy," in which Carson runs her perceptive finger over the surface of the novelist's crystalline imagination and his benighted marriage (48 years of hell after a newlywed's fateful mistake). Carson captures Count Leo Tolstoy and his miserable wife as another odd couple strangely united. For the count, she offers a set direction:

His bedroom on a March morning as cool as pearls, close-up on rustling,

For the mostly misunderstood countess:

Her alone at a midnight table in the zala, leaning over the manuscript with

her shortsighted eyes, shadow of her bent arm huge on the wall.

Woolf makes a final appearance at the end of the book, when Carson at last reveals what drew her attention so ineluctably toward a contemplation of time: Her mother died, and suddenly "night comes earlier -- gathering like a garment." Woolf's diaries stood on Carson's desk after the funeral, and she looked to the books for comfort despite their having led Woolf ultimately "to the River Ouse" -- that is, to her suicide. And yet, the poet declares, "strong pleasure rises from every sentence." It's easy to make the same judgment of Anne Carson.

Kate Moses is the author of "Wintering: A Novel of Sylvia Plath" (St. Martin's.) She was the co-founder, with Camille Peri, of Salon's "Mothers Who Think" site, and she and Peri also co-edited the award-winning book "Mothers Who Think: Tales of Real-Life Parenting." She lives in San Francisco.