U.S. drug policy: Are we doing the right thing?

The White House responds to Michael Massing's critique of the war on drugs, and Massing replies. 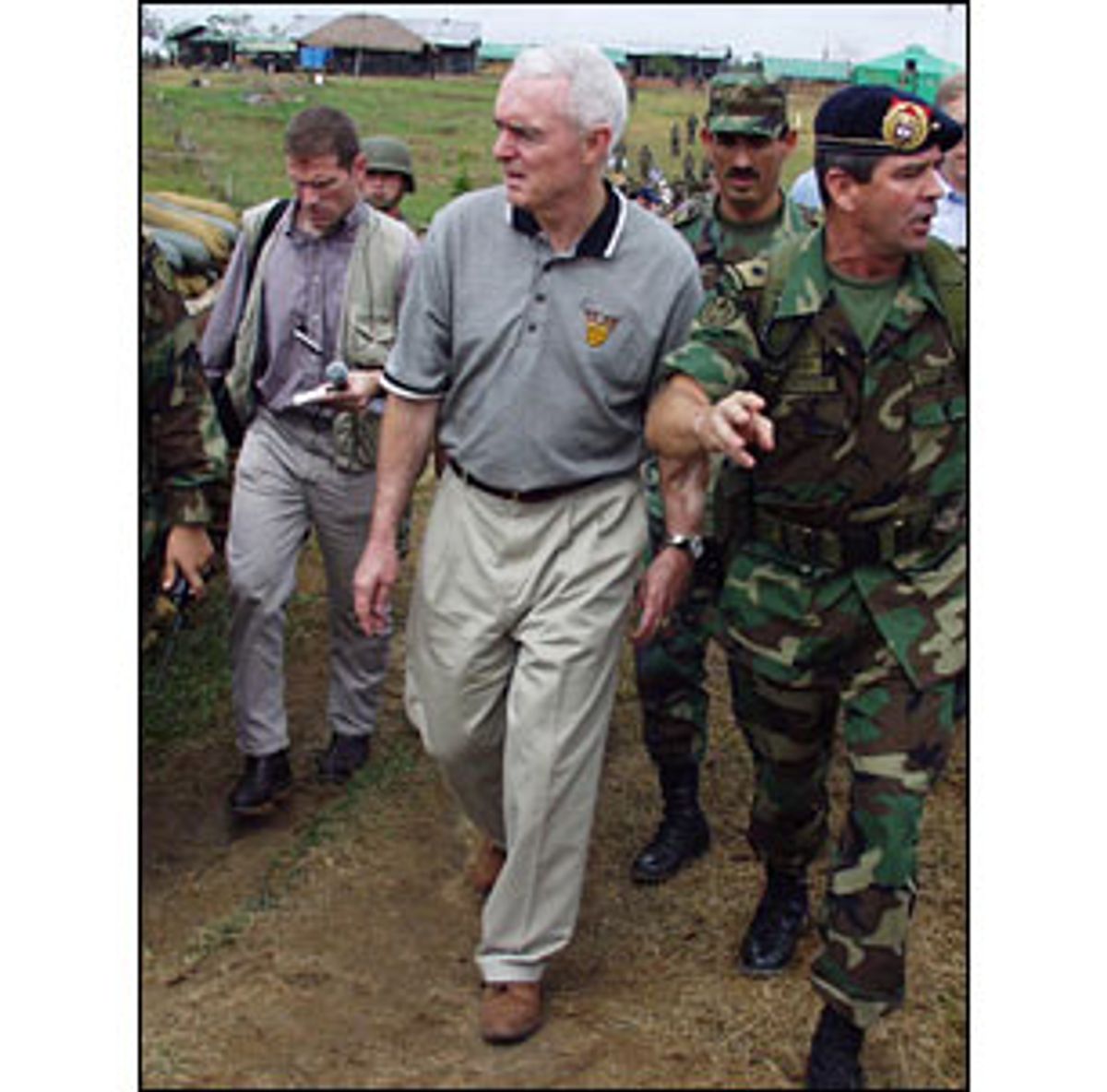 Michael Massing's latest missive, "The Elephant in the Room," discusses at great length his perception of U.S. counter-drug policies. However, what Mr. Massing describes bears little resemblance to our efforts. Massing has built this fiction because the facts don't support his arguments.

Massing complains that the administration's proposed counter-drug aid package for Colombia and the Andean region has been received with "little fuss or fanfare." It seems that Massing has not been reading newspapers, watching TV, listening to the radio or viewing C-Span lately. The administration's proposal has been the subject of coverage and editorial comment by literally every major news outlet in the nation across every form of media -- ranging from CBS to the New York Times to NPR. Congress has already held three hearings on the proposal over just the last month, and full floor debates are scheduled in both houses.

Massing's approach to Colombian aid typifies his modus operandi: Where the facts don't support his premise, he simply ignores them. Why be constrained by reality when you can create your own world?

Massing states that "If drugs were legalized, the whole noxious network of drug traffickers, smugglers and money launderers stretching from the jungles of South America to the streets of our inner cities would suddenly disappear." This conclusion is not only incorrect but ludicrous.

There is a vast array of otherwise legal products that are also commodities on the black market. For example, the fact that guns are legal in the United States has not eliminated crime and violence on our streets. Nor has it halted the black market in weapons that puts guns in the hands of criminals.

Contrary to Massing's argument, legalization of marijuana use in the Netherlands did not cause traffickers to vanish in thin air. Organized crime runs the Dutch "pot" industry, according to a March 13 Salon article (David Downie, "Going Dutch," Downie notes one Dutch official's report that "90 percent of smoking coffee shops in the city are controlled by organized crime." The illegal Dutch marijuana industry today brings in more money than the other traditional, legal Dutch crop: tulips. One of Salon's sources, Kurt van Es, a noted reporter with the Amsterdam daily Het Parool and a self-declared proponent of drug legalization, goes so far as to say: "The Dutch have become the Colombians of marijuana and hash trafficking in Europe." If decriminalizing or legalizing drugs was supposed to reduce crime, no one told that fact to the crime kingpins who are using their pot riches as venture capital for other criminal enterprises -- such as running guns and pushing drugs like heroin and ecstasy.

Massing claims that the main strategy for dealing with hardcore drug addicts in the U.S. is "arrest, prosecution and incarceration." This assertion is incorrect. Over the last two years, the administration has focused on changing how the criminal justice system deals with the link between drugs and crime. Our aim is not to lock up countless low-level, nonviolent, addicted drug criminals but to use the leverage of the criminal justice system to help these individuals obtain supervised treatment, learn to live drug-free, and remain in society as productive members.

For example, there has been a dramatic increase in the number of drug courts -- which offer low-level, nonviolent drug offenders supervised treatment in lieu of prison. There were only 12 such courts in 1994; today, there are over 457 with another 250 planned. The president's current budget request calls for an additional $112 million to increase the number of treatment programs within the criminal justice system.

We are focusing on treatment in the criminal justice system because, as Massing concedes, hardcore addicts are responsible for the bulk of drug-related crime. The vast majority end up in jail. In addition, breaking free of addiction to heroin or methamphetamine is not easy, and most addicts will relapse. Studies show that the average cocaine addict has been in treatment three times, and heroin addicts attempt treatment five or more times. However, when the options are between staying in treatment or facing graduated sanctions resulting in imprisonment, the incentive to tough it out and get clean is far greater. Not only have these programs been proven to reduce drug use, but they have also cut recidivism by 40 percent. The criminal justice system is, perhaps, the most effective vehicle for treating hardcore addicts because the majority of these people can be found behind bars at one time or another.

Massing is wrong when he suggests we are expending tremendous resources arresting "teenagers ... for smoking pot." During fiscal year 1998, only 33 federal defendants were sentenced to jail for base offenses involving less than 5,000 grams of marijuana. During this same period, 196 criminals were sentenced for crimes involving between 1 million and 2.99 million grams of marijuana -- more drugs than can fit in a van, much less a pocket.

At the state level, recent studies show that the average sentence for individuals convicted of felony drug possession charges -- the crime many drug traffickers end up pleading to -- received either five months in jail (41 percent) or 36 months of probation (30 percent). Even in New York state, home to the Draconian Rockefeller drug laws, in 1996 fewer than 10 percent of felony drug arrestees (with no prior felony arrests or convictions) were sentenced to state prison.

These crime statistics call into question what Massing means by a "public health" approach. The overwhelming number of drug criminals have committed serious crimes involving weapons, selling drugs to children, running drug syndicates or committing drug-related crimes like murder. Surely, even Massing wants criminals like these behind bars.

For practical purposes, what difference would Massing's approach really make? Unless he wants hardened criminals to go free and unpunished, we would still be arresting serious drug offenders and seeking to get them into supervised treatment.

Massing wants us to direct our attention at so-called "hard drugs" rather than marijuana. Here again, his analysis is flawed. Marijuana, the first illegal drug most young people try, is a gateway substance. An article in the March edition of the American Journal of Public Health Studies notes that marijuana use is an important precursor to the use of other drugs. By preventing or delaying youngsters from trying marijuana, we dramatically decrease the likelihood that a child will have a substance-abuse problem later. Preventing marijuana is thus smart public-health policy.

Moreover, Massing's view that marijuana is somehow "soft" or benign and that "a convincing case can be made for legalizing, or at least decriminalizing, marijuana ..." is out of touch with reality.