Elinor Burkett argues that family-friendly policies are racist, regressive and, worst of all, anti-woman. 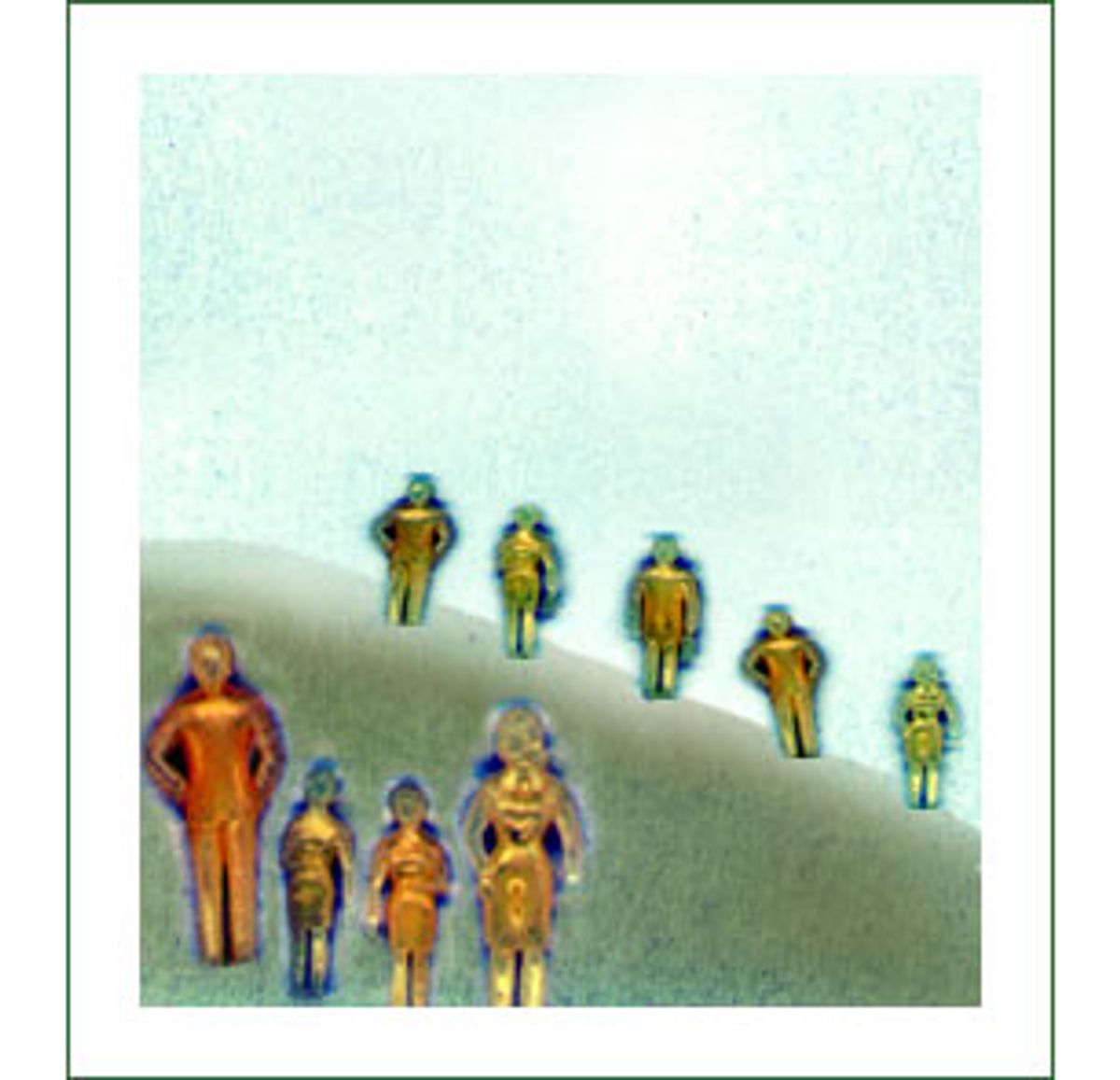 To secure a place on Working Mother magazine's list of the 100 best companies for working moms a business has to put a premium on the personal needs of its employees, particularly female ones. Most companies on the list offer flextime to let parents cope with family demands; many offer on-site child care as well as extended maternity leave and adoption aid.

According to Working Mother, the companies that make the grade not only are superior "trailblazers" from a corporate values standpoint but also "attract star recruits, retain talented employees and boost productivity."

Over the past 14 years, the list has become one of the oldest and most respected tools used to measure company cultures and values. To make the list -- especially at a time when companies have to offer major perks to compete for the best employees -- is widely regarded as a badge of honor, one that companies like Bank of America, Prudential and IBM are happy to receive.

But if you ask journalist Elinor Burkett about this hallowed distinction, you'll get a more disturbing assessment. She believes that these distinguished companies have set American women back half a century with discriminatory policies that violate the once-sacred feminist canon of equal pay for equal work.

In her book, "The Baby Boon: How Family-Friendly America Cheats the Childless," Burkett argues that both the family-friendly platforms pushed by politicians across the spectrum and the family-friendly policies adopted by corporate America over the past decade are anti-feminist, regressive and tinged with racism. Such programs, she says, are little more than a politically correct way for affluent baby boomers to milk the system for cash and personal indulgences.

Government- and corporate-sponsored pro-family programs, says Burkett, shift the burden of parenthood off parents -- most of whom, presumably, have chosen to have children -- onto the shoulders of their childless friends, co-workers and peers.

When the Equal Pay Act was passed by Congress in 1963, it upended a business precept that had stood rigidly in place since women had entered the workforce: that men, because they were more likely to be supporting a household on their salaries, deserved to be paid more than women, who were probably single (why else would they be working?) and responsible only for their own expenses. The act's passage promised women the "simplest and most basic foundation of economic justice," writes Burkett.

Almost 40 years later, however, the pro-family programs endorsed by governments and employers now offer just the opposite: unequal pay for equal work. Employees with children get thousands of dollars a year in benefits -- extra insurance and unpaid leave, scholarship aid and tax credits -- that are denied to nonparents. Those of us who remain childless save untold sums for our employers, Burkett argues; yet these sums are not repaid in other benefits, like extra vacation time or greater 401K contributions.

Burkett also cites an array of less tangible inequalities. Childless employees, she says, are often asked to pitch in to finish a project when their co-workers have to leave early to pick up a sick child. Nonparents may be forced into less desirable shifts to allow parents to spend breakfast and dinner with their children, and asked to cover for parents on holidays. (For example, Burkett writes about a New York Times editor who managed to wreak havoc on the paper's metro desk simply by handing July 4 weekend work assignments to the staffers who had not worked a holiday in two years -- that is, to the newsroom's mothers.)

While more traditional feminists laud the array of new programs and policies designed to make it easier for women to continue to work while raising children, Burkett sees a world in which women are still rewarded unequally for the choices they make -- with the highest rewards going to the women who choose motherhood, the most traditional female role of all. The goal for which feminists labored in the second half of the century -- the opportunity to have both a family and a career -- was never supposed to be easy or to pay more, Burkett says; it was just supposed to be available.

Perhaps I am dense, but, to me, the "right" to choose both career and family means that no one can say: Look, if you want to work, you may not bear children. Or, if you want kids, you may not work. And, finally, thank goodness, women have gained that right. But having the right to opt for that choice doesn't guarantee that it will be easy or stressless, or that you will be able to do both at once without keeling over in collapse ... Rights are guarantees of opportunities, not outcomes.

Burkett doesn't appear to be anti-child. Her quarrel lies more with the middle-class boomer women who she says expect society to fund their reproduction efforts, than with poor or working-class parents in greater need of financial support. In fact, Burkett makes the case that government and corporate policies divert benefits from the children who need the most assistance.

Admittedly, Burkett's argument has some serious flaws. She tears into the multiple tax breaks given to parents, but never manages to break down the costs incurred by raising children, presumably the expenses that these tax breaks are intended to offset. And her sympathy for those who would create adults-only neighborhoods and restaurant dining rooms smacks of intolerance: Pro-family programs may indeed be what she refers to distastefully as "affirmative action for women," but child-free spaces constitute active discrimination.

An even greater liability, perhaps, is Burkett's blithe, brief dismissal of any claim that caring for children is a community responsibility. On one hand, she says she is open to a discussion on the social value of raising the next generation:

I accept the proposition that discrimination can be justified in the face of a compelling social interest ... I'm prepared to entertain arguments about why there is a compelling need for us to transfer the wealth and energies of nonparents to those raising kids. But I still haven't heard them framed in any terms that justify giving upper-middle-class parents tax credits and child-care deductions, leave from work to watch Susi dance Swan Lake, or flex-time to check on the nanny.

But Burkett herself fails to initiate that discussion: She produces no zero-population-growth arguments, makes no call for a declining birthrate.

There is, however, a lot about "Baby Boon" that rings true. Burkett is an experienced reporter and a compelling writer, and she has done her homework. She makes her case persuasively and unrelentingly -- not just on behalf of the childless, but also for the families living in poverty for whom programs like HOPE scholarships are sadly irrelevant.

Burkett provides statistic after statistic to suggest that America is ready for a backlash against parenthood: the one in four women born between 1956 and 1973 who will never give birth; the 19 percent of married couples who have chosen not to have a child -- a figure that has doubled in the past decade, she notes.

She tracks the politicization of "family values," and maps the bipartisan machinations that led to the Family Medical Leave Act (the creation of which united liberals eager to support women in the workforce with conservatives hoping to keep moms at their children's sides). She questions the sense of entitlement that middle-class parents seem to have developed; and she asks uncomfortable questions about whether unpaid-leave policies, tax credits and tuition deductions -- which primarily benefit more affluent families -- are merely intended to pay white, educated Americans to reproduce.

And she lays down a call for change: She suggests that if we are seriously concerned about the status of underprivileged children, we should shift "pro-family" aid to benefit the low-income populations that need it most. She calls for "a national conversation about what claim middle-class and upper-middle-class parents have on the childless."

Burkett's is a conversation that many people may not be willing to continue. She makes some very good points, and in many cases I agree with her. But that doesn't mean I will be chatting up her case at cocktail parties anytime soon. Just try bringing up these ideas around parents -- you're likely to get some cold stares and uncomfortable pauses, as well as some good old-fashioned, in-your-face hostility. Appearing anti-child became a cardinal sin during what Burkett calls the "procreation-obsessed '90s," and I've got plenty of parental friends whom I'd prefer not to alienate over a public-policy debate.

Burkett's willingness to speak up in public, at the of risk being called a child-hating shrew, may be her book's most revolutionary tenet. But her expectation that her ideas may be translated into a revolution in policy is unlikely to be realized -- not only because of the multitudes who disagree with her, but also because of people like me: the observers for whom the political has not yet become personal, who agree in private but stay mute to keep the peace.