Spicy Firebites, with a jumbo movie deal on the side

Rob McKittrick was a waiter at T.G.I. Friday's. Then he sold his screenplay. Now he has a six-figure bank account, a classic car and a house in the Hollywood hills. 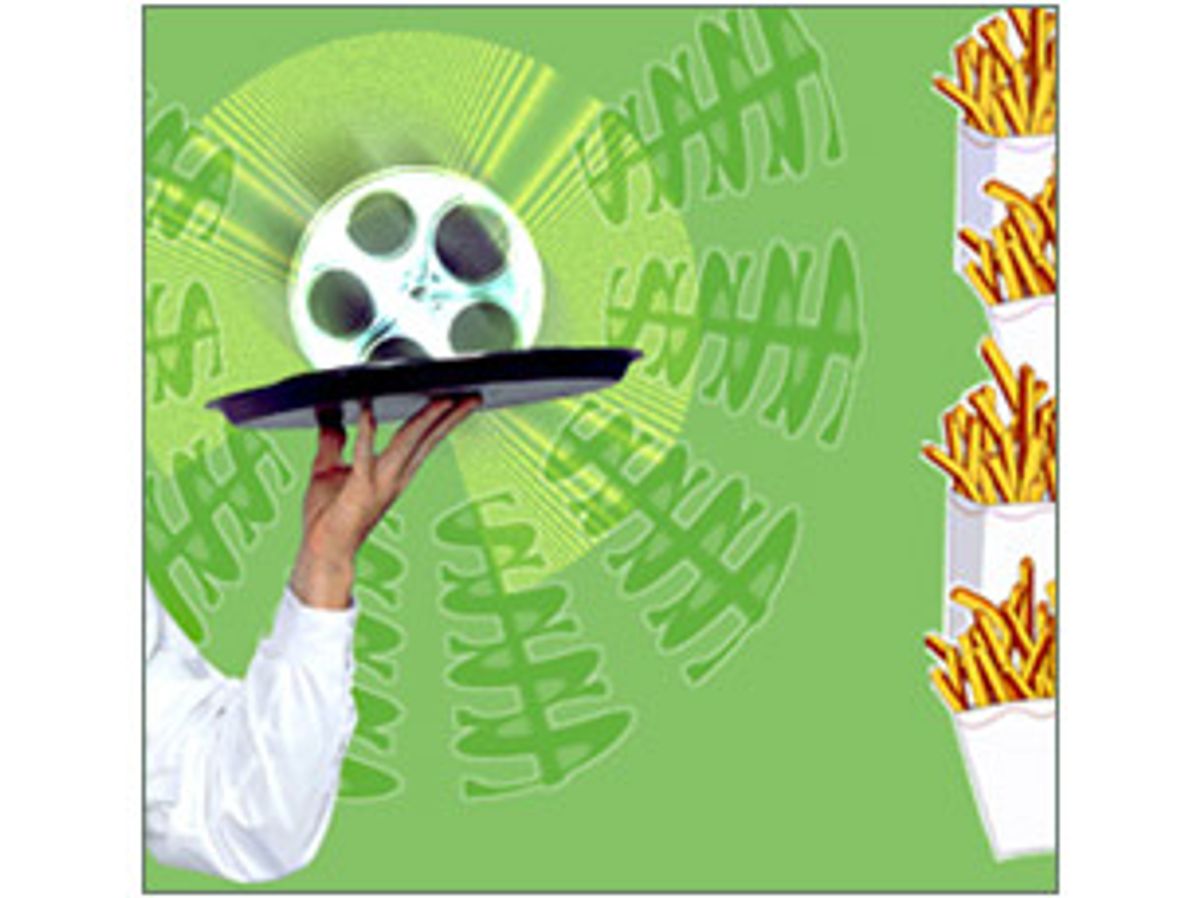 A good waiter goes unnoticed. He does his job so well that his contributions seem effortless. Salads disappear, main courses materialize and beverages refill, as if by magic.

A good writer does the same. Without bringing attention to the writer, his or her plots compel you, his or her simplest words move you. Real people and real emotions are conjured from ink and wood pulp, as if by magic.

But neither operation is in the least bit magical. "Waiting tables is monkey work -- you learn the menu, you fill the drink, you take the money, you play the game," drones Rob McKittrick. "And writing is a pain in the ass. Most days I just sit at the computer pissed off. It sucks."

He should know. He has done both, simultaneously. While singing his way through another off-key rendition of "Happy Birthday" and peddling Tex-Mex Towers and spicy new Firebites at an Orlando, Fla., T.G.I. Friday's restaurant, McKittrick, 27, stumbled upon an El Dorado most Syd Field neophytes find only in their most carnal Hollywood daydreams.

McKittrick's spec script, "Waiting," was recently sold to Artisan Entertainment ("The Blair Witch Project," "Swingers") for a jumbo order of money -- six figures for the initial screenplay, close to six figures more for the rewrites and, to wash it all down, a blind script-development deal that essentially pays McKittrick in advance for a script he hasn't even written yet.

"Waiting" details the all-too-habitual life of a group of young waiters at a chain restaurant called Shennanigans. It's a place where busboys smoke dope in the freezer, dishwashers pontificate on enigmatic psychological imbroglios and steak dinners are hastily plucked off the dirty kitchen floor and deemed "eatable" in accordance with the "five-second rule." (Dropped food that's picked up within five seconds has not officially hit the floor.) McKittrick wrote the script while being hired and fired at several Orlando-area chain restaurants.

To even "get the job [at these restaurants] you have to take this 'personality profile' nonsense -- 100 questions that are basically to see if you have the criminal element inside of you. Like, 'True or false -- I think that people are following me,' and 'True or false -- Sometimes I get really, really mad and just leave.' If you did do that, who the hell would admit to it?"

"Bennigan's, Friday's, Steak and Ale, Roadhouse Grill." He rattles off the names. "The one thing that really struck me was that they're really all the same! Certainly with the customers -- cool customers and asshole customers -- but also with the staff. There's always a sort of standoffishness between cooks and servers, always a cute hostess the guys flirt with, and generally there's at least one asshole manager."

So similar are these establishments, in fact, that each new wait staff McKittrick joined, including T.G.I.F.'s, assumed that it was the sole inspiration for "Waiting." "They'd say, 'Oh, you must've based that on Christy, she's a bitch,' or 'You must've based that on Shelly, she's really hot.' But these are just the type of people that migrate to these places.

"My script is about waiting tables in a restaurant," McKittrick explains. "Thematically, it's also about waiting in life, being in that in-between stage, blindly working towards a community college A.A. degree, not being sure what the hell you're doing. I was certainly that person, and I've known a ton of people like that."

"Waiting" is a film that a lot of people are going to connect with -- a lot of young, frustrated, humiliated, starving-artist-type people serving up jalepeqo poppers and hot pizzadillas until 2 a.m. at exactly these types of franchise eateries. The explosive demographic potential for "Waiting" is exactly why McKittrick and pal-producer Dean Shull's chance flirtation with a cute receptionist (who knew a guy who knew a guy who worked for an agent at William Morris Agency) snowballed into a two-week bidding war in February among Artisan, Sony Screen Gems and MPCA, with Artisan winning out.

McKittrick's story is only the most recent in a long line of kitchen-to-condo spec script parables, many of which double as cautionary tales. In 1996, it was Dave McKenna's "American History X." That script sold for six figures and attracted production company New Line, actor Ed Norton and director Tony Kaye.

In 1997, it was bartender Troy Duffy, whose "The Boondock Saints" was faxed to Miramax mogul Harvey Weinstein page by page as he flew to the 1997 Academy Awards. Weinstein immediately demanded a meeting with Duffy the morning of the Oscars to close the deal. Later that night, after Miramax's triumph with "The English Patient," Weinstein pulled up to Duffy's bar in a stretch limo and cheerily asked what Duffy planned to do with all the money he was about to make. Duffy responded that he'd probably buy the bar. Knocking down a beer, Weinstein impulsively decided to co-buy the place with him.

Of course, "The Boondock Saints," which just came out on video, took longer than an order of grease-free pot stickers. The bizarre Weinstein-Duffy beer concordat, meanwhile, hasn't happened either.

This doesn't faze McKittrick. Before the ink was even dry on the Artisan contract, he "got the hell outta" the Florida food service industry and tucked himself neatly into the glitzy Hollywood hills. "Toward the end of my two years waiting tables, I had my fair share of detractors who were giving me enough shit," McKittrick explains. "'OK, where's your movie, Mr. Movie-Man?'"

"When he found out he was going to Los Angeles, he gave his two weeks," says fellow T.G.I. Friday's waiter Daniel Ruth, laughing. "Then he didn't show up for one of his shifts, and then he just quit."

When they're not too busy bewitching diners with a slice of chocolate caramel crunch cake or that third tumbler of ultimate rum runner, McKittrick's former co-workers at T.G.I. Friday's are happy to credit their peculiar brand of "script meetings," in part, for McKittrick's escape from culinary purgatory.

"We were definitely his testing ground," says waiter Andy Martin proudly. "He spoke about the script every free minute. He would toss ideas around and, yeah, we would tell him if something sucked. The script is a good representation of the people who are involved in the business; it's a whole other world."

Friday's manager Bill Dilts is happy for McKittrick, too, but stops short of calling McKittrick's restaurant portrayal "accurate." "I've been in the business since 1967," he says. "And certain instances [in the script] -- the banter, the one-liners zinging back and forth, having fun and making fun -- are very accurate. But we don't have people hanging from the ceiling exposing themselves."

Dilts is speaking about the principal pastime of McKittrick's male characters -- duping each other into inadvertently looking at each other's suddenly revealed genitalia, whereupon the looker must accept atonement in the form of some serious kicks to the backside. Full frontal nudity and unbridled brutality don't quite gel with Dilts' theory on maintaining a good wait staff: "You need to have all the right equipment on hand and then let them have fun doing what they do best, which is wait tables."

But McKittrick's friend and T.G.I.F.'s co-worker Mason Biener doesn't want waiting tables to forever be what he "does best." The script's plot "is just what a lot of us are going through right now. The restaurant business is not our permanent career. We just haven't made that next step."

Of course, if for whatever reason the whole Hollywood luminary thing doesn't pan out for McKittrick, at least he's got a fallback, Biener figures. "He was a good waiter. He entertained his guests; he was real pleasant with them."

"Waiting" producer Shull -- who met McKittrick while he was dining at the Orlando T.G.I. Friday's -- echoes the comment: "He was a damn good waiter. But he's a better writer." Shull pauses. "I hope."

Perhaps being a waiter makes you a better writer. Perhaps memorizing Friday's awe-inspiring, 15-page bible and juggling all 18 appetizers, eight pasta dishes, eight salads (with 12 different dressings), 10 burgers (with 19 different toppings), eight soup combos, nine desserts and 13 margaritas prepares one for a career of juggling complex story lines and intricate subplots. Perhaps dealing with dozens of servers, cooks, managers and customers every night prepares one for a career of perceptive and economical character development.

Or maybe it just makes you ill.

Being a waiter "definitely contributed to my jaded view," says McKittrick. "The permeating sense of the script is one of a sarcastic wit that could only come from someone who's waited tables for a number of years -- dealing with a customer's shit, and 'the customer is always right' idea when the customer is obviously trying to get something for free.

"Once I saw this bitch woman and her brat kids, and they were being so rude to this waitress that I was just livid watching it. But that woman broke the cardinal rule -- you don't fuck with the people that handle your food." Cackling, McKittrick adds, "Her food got tainted in ways that I shudder to discuss."

Upon selling "Waiting," McKittrick splurged on a classic Volkswagen Kharman Ghia. It's difficult not to picture this automobile as a shiny middle finger aimed at the despicable customers who crowd McKittrick's orangeade-refilling, mint-chocolate-chip-milkshake-making, perpetual-beaming food service memory.

But McKittrick is not worried about becoming a cautionary tale. If Artisan fails to make "Waiting" in the contractually allotted time of two years, McKittrick will simply switch to "Plan B": using his newfound cash to produce the film himself, in the name of menial laborers everywhere who are still waiting for that one big opportunity to not have to depend on the generosity of others to make a living.

"You have certain types of questions for a long time," says Shull, "like, 'Shit, I don't know what I'm going to do with my life; all my friends are selling plumbing supplies, maybe I should quit following my heart' ... Thank God something like this is starting to happen for us.

"Because once you start getting close to 30 years old, you start thinking, Oh, shit."