Stanley Tucci and Ian Holm face off as a New Yorker writer and the loopy Greenwich Village street character he turned into a celebrity -- with devastating results. 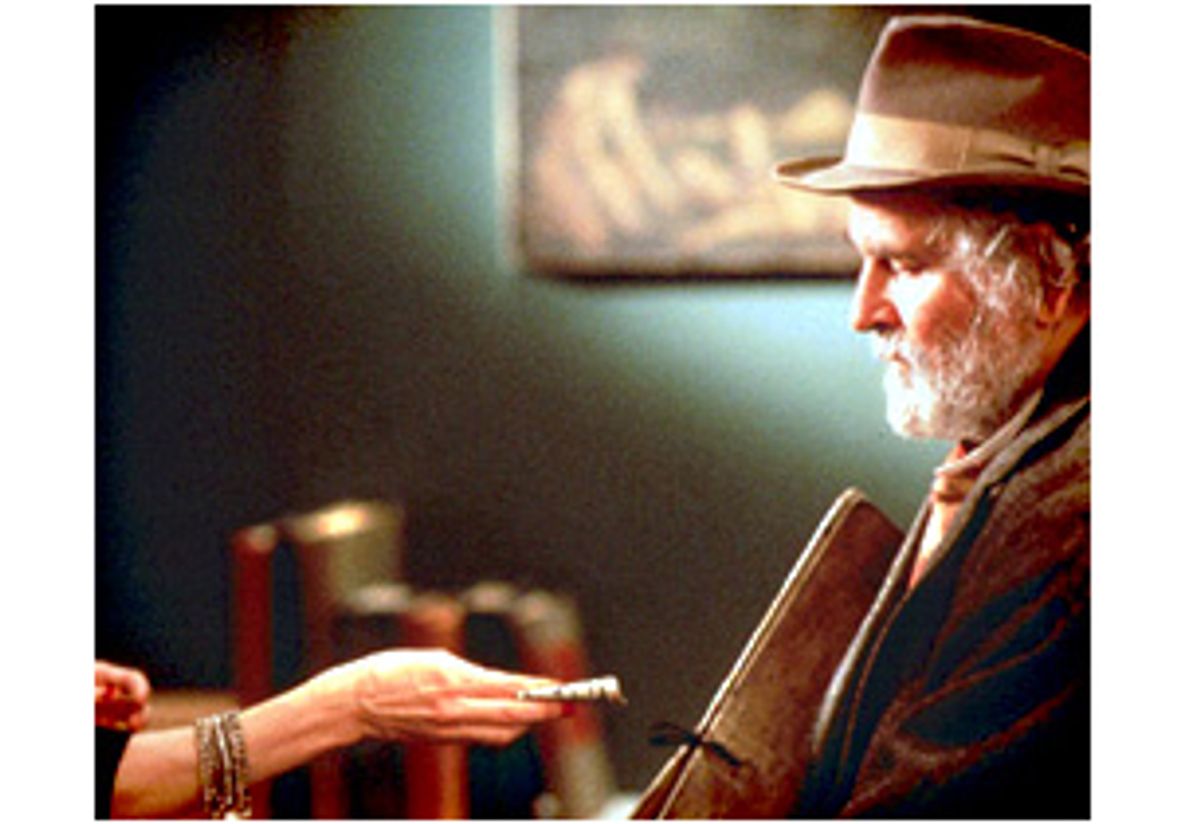 It may be that journalism is an excellent preparation for parenthood, teaching as it does the necessity of letting go. Sometimes, under pressure of deadline, wanting a piece to be perfect takes a back seat to just wanting it to be done. You learn to live with imperfection, or you drive yourself crazy.

The comedy of not being able to let go -- or even get started -- should be at the center of "Joe Gould's Secret," Stanley Tucci's film of the famous Joseph Mitchell book. There are few journalists who have ever questioned themselves the way Mitchell did in that book. In 1942, Mitchell, a staff writer at the New Yorker from the end of the '30s until his death in 1996, published a piece called "Professor Sea Gull." It was a profile of a Greenwich Village street character named Joe Gould, a scruffy middle-aged exhibitionist who claimed to be working on an immense book called "An Oral History of Our Time."

As Gould explained it to Mitchell, the book would be a massive compendium of street talk, rumor, innuendo, tall tales -- history that took place in the gutter level rather than the hallowed halls. The few excerpts Gould had managed to publish in venues like the legendary literary magazine "The Dial earned him the admiration of e.e. cummings and William Saroyan, among others. When Gould wasn't carrying out the hours of work he claimed were devoted to the "Oral History," he was making the rounds of taverns, playing the role of Bohemian for the tourists, scrounging free drinks and handouts for what he called the Joe Gould Fund.

The profile elevated Gould from local oddball to loopy celebrity. Letters with contributions to the fund began to arrive at the New Yorker. But before the profile even ran, Mitchell was having his doubts. The excerpts of the "Oral History" that Gould showed him were barely varying versions of the same chapters. When Mitchell asked to see more, Gould had sets of excuses as to why the work was unavailable. And having written the piece, Mitchell found that he had unwittingly fallen into the role of Gould's confidant, condemned to spend evenings fighting sleep in bars as Gould carried on an incessant monologue, setting off on one digression after the other. One day, in a fit of anger, Mitchell blurted out that he believed the "Oral History" didn't really exist. The horrified look on Gould's face told him he was right. After that, their contact dwindled. Gould collapsed on the street in 1952, and died in a New York state mental hospital five years later. Mitchell maintained his silence until 1964, when he published the essay "Joe Gould's Secret" in the New Yorker.

It's an extraordinarily gentlemanly piece of writing. Mitchell gives the straight version of the facts he had glossed over in "Professor Sea Gull," including tales of Gould's petty thievery (in one instance at the expense of a friend who could least afford it) and his drunken abusiveness toward the people most willing to help him. But he also shows real compassion for Gould's failing to ever get down the work he envisioned in his head. In one key passage, Mitchell compares it to the idea for a novel he carried with him for some years without ever getting around to committing to paper. "Joe Gould's Secret" is the work of a man who is not proud of the hand he had in creating a myth, but who is equally ill at ease with the truth telling that being a journalist entails. That discomfort may have preyed on Mitchell: Except for an introduction to the 1992 collection of his work "Up in the Old Hotel," the essay was, for whatever reasons, the last thing the writer ever published.

Stanley Tucci's film, starring Tucci as Mitchell and Ian Holm as Gould, is faithful to the facts of the story and yet it's all wrong. It's carefully made, respectful and dull. Largely on the basis of his first picture as director, "Big Night" (co-directed with Campbell Scott), Tucci has acquired the reputation of being adept at actors' moments and quiet scenes. The affection he showered on the performances of Tony Shalhoub, Alison Janney and others in "Big Night" is what carried that picture. It was easy to understand the affection for a movie that trusted the audience to respond without squeezing the response out of them.

But Tucci isn't a filmmaker. There's no snap, no tension in his work, no evidence that he feels any excitement at working in the medium. In an early scene in "Joe Gould's Secret," Mitchell and his wife, Therese (Hope Davis), have breakfast with their two little daughters, who tell their father that the subject of his new piece sounds boring. There's none of the hubbub and ruckus of family life; everyone talks as if they were auditioning for NPR. Whenever Tucci shows us a scene of Mitchell's daughters getting into mischief -- indulging in a pillow fight or starting an impromptu game of keep-away with his fedora -- the only sound we hear is a sensitive piano tinkling on the soundtrack. This is a grown-up movie, folks, one where children are seen but not heard.

But does grown-up have to mean slack? In "Professor Sea Gull," Mitchell described the "Oral History" as "A great hodgepodge and kitchen midden of hearsay, a repository of jabber, an omnium-gatherum of bushwa, gab, palaver, hogwash, flapdoodle, and malarkey." That feel for common bull and for the casual rhythms of American life is what's missing from Tucci's direction. "The city's unconscious may be trying to speak to us through Joe Gould," one of his admirers contended, but that unheard voice here takes the form merely of tasteful montages of street life and people riding the subways, pictures that look like creamy and false derivations of Walker Evans. Some of these are re-creations of photos taken by Mitchell's wife, Therese. When Davis, who plays her, says that she hopes to be invisible when taking her photos, he counters, "You're too attractive to be invisible."

In any other movie, he'd be right, but Davis is damn near invisible here. Only a few of the actors come through, like Jerry Mayer as a Village tavern owner, who exudes the experience of a man who's seen it all and has somehow retained the good humor to still be tickled by it, and Patricia Clarkson as a gallery owner and patron of Gould's. The movie perks up whenever Clarkson comes on screen; she's a little oasis of clear-headed life.

For the most part, Tucci has made the movie with the same fussiness that Mitchell shows when he spreads a newspaper over the dining room table before cutting into a watermelon. Mitchell was perhaps that kind of a man. Tucci's skillful performance gets at Mitchell's genteel Southern deference, not just in the impeccable way he dresses but in the quietly lilting voice he employs, and the way he seems to wrap a pillow around his consonants. (He says "dudn't" for "doesn't.")

And Tucci doesn't hide the fussiness of Mitchell the writer. In one scene, the New Yorker's legendary editor Harold Ross (played by Patrick Tovatt) practically has to pry a story out of Mitchell's hands to keep him from fine-tuning it into oblivion. Tucci has set himself a tough task: Conveying the paradoxes of a man he obviously esteems. The trouble is that the performance is so recessive it lays out Mitchell's dilemma without dramatizing it. Perhaps the only way to dramatize "Joe Gould's Secret" is as a sort of black comedy about a writer whose curiosity saddles him with an albatross that his good manners prevent him from jettisoning. But the movie itself is too good-mannered to take that tack.

Holm plays Gould closer to the disagreeable character Mitchell wrote about in "Joe Gould's Secret" than the amusing nutcase he created in "Professor Sea Gull." The result is that we get Gould's torment without his ebullience. No doubt, as Mitchell wrote, that as Gould's desperation took hold, people began to dread running into him. We see his freeloader's contempt for the industriousness of people he benefits from. Gould is the type of guy who, sooner of later, makes you sorry for every break you've ever given him.

But there had to be some cracked charisma that attracted Gould's benefactors. In one of the movie's best scenes, Gould works his shtick on a pair of secretaries who've ventured down to the Village for a taste of the Bohemian life. When Mitchell shows up, they're only too glad to make their escape. What's missing not just from Holm's performance but from the whole conception of the role is the shabby appeal that would have started the women talking to him in the first place.

Ian Holm is one of the actors I most look forward to seeing in the movies. His Fluellen in Kenneth Branagh's film of "Henry V" is unlikely ever to be matched. And his performance as Lewis Carroll in the too-little-seen "Dreamchild" is one of the least-known great performances in the movies. (Going through an exhibit of Carroll's photographs and letters a few weeks ago, I couldn't get Holm's heartbreaking, halting ardor in the role out of my head.) What's missing from Holm's performance here is joy in Gould's nonconformity, some zip in his high-hatted rot-gut palaver, a touch of the freeing grossness you see in Michel Simon's performance as the bum in Renoir's "Boudu Saved From Drowning." For Gould to wind up tragic, he can't start that way.

As solicitous as the movie is of Mitchell, it winds up doing him a disservice. Tucci falls back on the easy irony that the story of a man working on a nonexistent book was made famous by a writer in the last essay he wrote before 32 years of silence. That observation has cropped up in much of the commentary on Mitchell, and as an analogy it doesn't hold water. There's a difference between a half-mad alcoholic bum cadging "donations" in the name of a pipe dream and a published writer who, whether he dried up or was struck dumb by a distaste for his profession, left behind a fine, if small, body of work.

It's one thing for Mitchell to invoke the novel he dreamed of and never wrote as a way of invoking sympathy for Gould. It's quite another for the filmmakers to use that story to draw a parallel. In one scene, Mitchell describes his imagined novel to a man he meets at a cocktail party. In his essay, Mitchell described the book as about "a day and a night in the life of a young reporter in New York City. He is a Southerner, and a good deal of the time he is homesick for the South ... [He] starts poking around the parts of the city that he knows best, gradually going uptown. As he wanders, he reencounters men and women who seem to represent various aspects of the city ... it dawns on him that it is not the South that he longs for but the past, the South's past and his own past, neither of which, in the way that he has been driven by homesickness to think of them, ever really existed."

In the end, the reporter understands that he "is now a citizen of the city and a citizen of the world." That story never took the form Mitchell envisioned, but reading through "Up in the Old Hotel," it's easy to recognize it as the story he nonetheless told, the story of his love affair with the remnants of a vanished New York and the oddballs and hangers-on who lived there. It was a considerable accomplishment that, with the best intentions, Tucci shortchanges.