David Duchovny and Minnie Driver star in a movie that almost seems like a godsend in this age of romantic-comedy schmaltz. 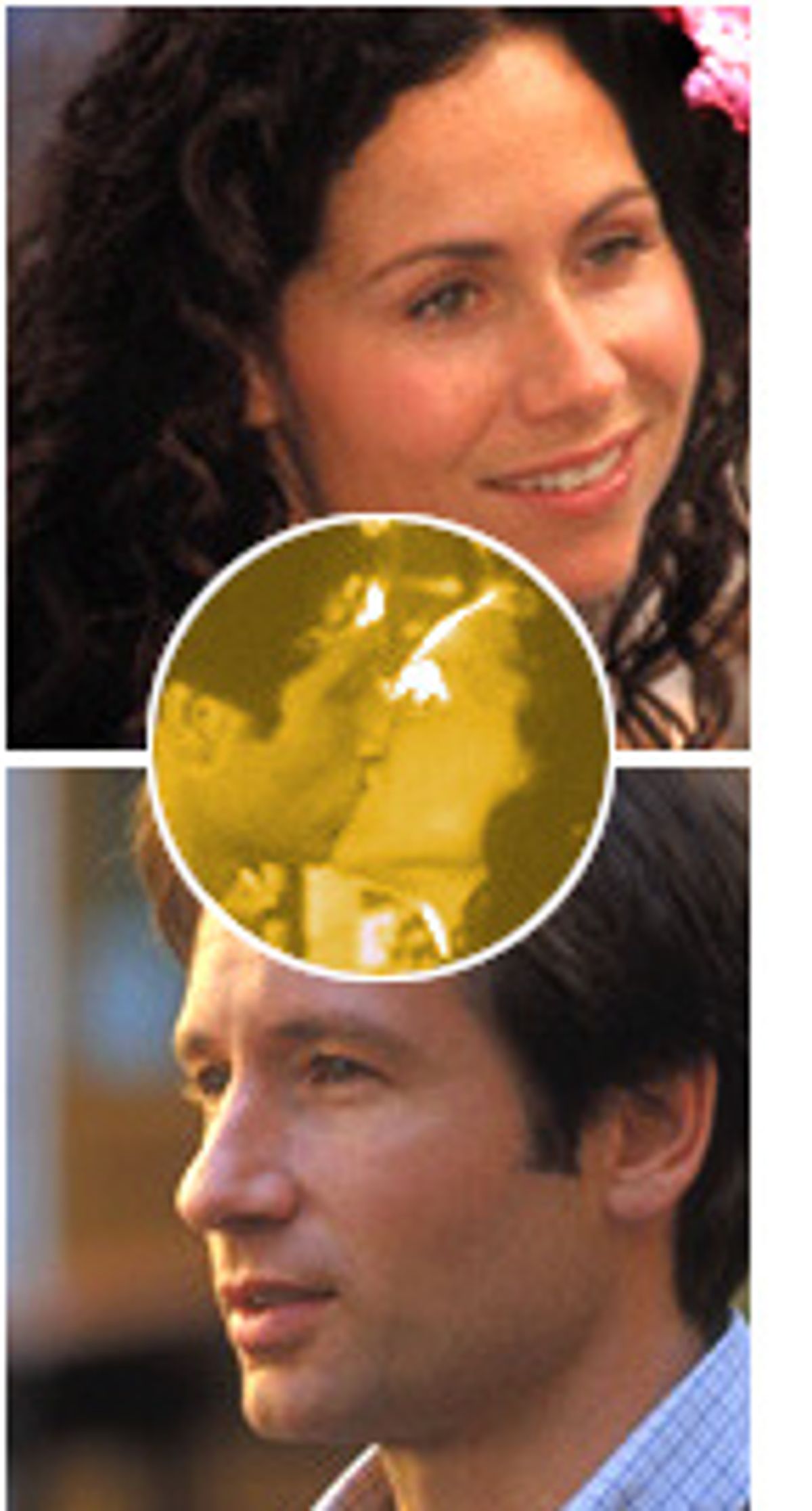 The state of romantic comedies has been so dismal in the past few years that a charming if minor picture like "Return to Me" is like a godsend. In her directorial debut, Bonnie Hunt (who also co-wrote the story and screenplay, and has a supporting role) doesn't emerge as the long-lost heir to Preston Sturges or Howard Hawks. Her picture wobbles a bit in places, and there are moments when it's a bit too winkly and twinkly. It can't completely divorce itself from the fact that we're only just now awakening from the Dark Ages of Nora Ephron, that bleak period in romantic-comedy history when directors seemed to believe that charm needed to be slapped on with a trowel lest the audience miss it.

But when, in the hours and days after you've seen it, a movie leaves you pondering its lovelier qualities rather than its faults, you know it has done something right. When I looked back on "Return to Me," I realized that even though its approach was occasionally a little too simplistic, there were very few times when I felt it had insulted my intelligence. A mainstream romantic comedy that serves up a believable, cakelike slice of love but also allows you to emerge with your dignity intact is all too rare these days.

If the premise of "Return to Me" sounds too nutty or contrived at the beginning, it ends up settling into a surprisingly pleasant rhythm. Architect Bob (David Duchovny) is madly in love with his wife, Elizabeth (Joely Richardson), an ape specialist who has taught sign language to a lovable gorilla, Sidney, at the local zoo. Elizabeth dies unexpectedly, and Bob is heartbroken; but her heart is transplanted into the body of Grace (Minnie Driver), a young woman who's been ailing since the age of 14. Grace works as a waitress at the Irish-Italian restaurant (and if that detail makes you groan, you're not alone) run by her grandfather Marty (Carroll O'Connor, doing an all-too-cute and horribly annoying Irish accent) and his buddy Angelo (Robert Loggia).

The restaurant is one of those warm, Cheers-like places where everybody knows your name, peopled by Marty and Angelo's cronies and an assortment of other suitably colorful characters. Eventually Bob and Grace meet, though he has no idea that it's his wife's heart that's beating inside her, and the two of them fall madly in love.

"Return to Me" is one of those movies that could easily hang you up if you set too much store by the plausibility of its setup. But it's also the kind of movie that speaks mostly through its details, rather than through its somewhat obvious plot contrivances. For one thing, the two leads are both incredibly appealing. I've never much cared for Driver as an actress. She has always made it too painfully clear that she works hard at her job, trying to put so much bite into her performances (particularly her plasticky, clenched-jaw Mabel Chiltern in "An Ideal Husband") that they just left me feeling more adamant about not buying her bill of goods.

But her Grace is so relaxed and so natural that I found it impossible to dislike her. (It's important not to be put off by the fact that early in the movie we see her lying in a hospital bed, speaking faintly through parched and cracked blue lips as she awaits her heart transplant.) In her scenes with Duchovny, her cautiousness and uncertainty play out with an appealing freshness -- she's as sweet as a country girl without being sickeningly disingenuous. When Bob shows up at the restaurant unannouced and catches her in pajamas, raincoat and fetching shower cap (she lives in a little apartment above the restaurant and has just rushed out to cover some plants to protect them from the cold), it's obvious how silly she feels -- she makes it clear just by the way she flashes her eyes. But she doesn't play it as slapstick, and she doesn't even remove the silly cap: Her explanation is simply that doing so would only give her "shower-cap head." The scene is lovely in part because of the way Duchovny looks so smitten with her, bonnet and all; in fact, it seems to make him love her more.

And Driver pulls off some even more difficult scenes. Grace doesn't want Bob to know about her heart transplant because she feels self-conscious about it, and because she doesn't want people to treat her as fragile. But when she realizes whose heart she has, her terror and confusion, and her realization that she'll probably lose Bob, are played so delicately that you don't feel pummeled by them.

Driver turns out to be a good match even for the dashing, devastatingly dry Duchovny. He will probably always end up playing the deadpan wisecracker -- it's a quality that seems to be written into his soul at this point, and probably would be whether or not he'd been honing it to perfection as Fox Mulder on "The X-Files." Even so, Duchovny's Bob isn't just a rehash of Mulder. Duchovny puts his obvious intelligence to work here -- you can see it in the casual ease of his line readings even in his most difficult scenes, and in the way he wears his handsome awkwardness so wonderfully in his first, tentative encounters with Grace.

His charm isn't always slow-burning -- often it catches quick, like a match. In a very early scene, when his wife gives a speech at a fund-raising dinner and asks him anxiously how she did, he replies without flinching that she did great. "And with the backlighting, I could see right through your dress." But one brief scene in "Return to Me" proves most definitively that Duchovny is willing to take chances. He returns home just after his wife has died and the couple's dog greets him at the door, obviously waiting for her to show up too. It's a heartbreaker if ever there was one, but both director Hunt and Duchovny play it right. He sinks to the floor and starts to cry quietly, and you think for a minute that you're in for some of that manly, stoic crying that always seemed a good enough expression of male sensitivity. But when his tears finally break free, his choked sobs are nothing short of devastating: They're too loud, too raw, too immediate and there's no turning away from them. The scene's lack of tastefulness is what makes it work so beautifully. The fact that it risks going right over the edge, and doesn't, is wonderful in its own right.

Hunt has good instincts as an actress (her supporting role, as Grace's friend Megan, has a breezy offhandedness) and she shows promise as both a writer and a director. (She co-wrote the script with Don Lake.) There are a few jokes that feel forced, and I could easily have done without seeing O'Connor in the hospital chapel, praying out loud for his niece with his forced brogue. But "Return to Me" has plenty of purely lovely moments: When Marty, Angelo and their crusty old pals want to play a record for the two lovers, who are having a chat just outside, they dig out a copy of Frank Sinatra and put on "At Long Last Love." Before long, they're fox-trotting playfully in each other's arms, singing the lines before Sinatra even gets to them, so that ol' blue eyes is simply reflecting the feelings they already know so well themselves.

And in one incredibly edited sequence, a simple love song provides a backdrop for a three-minute montage that covers joy, terror and, ultimately, numbing grief. The song's instrumental backing drops away, so that by the end only the singer is left -- a metaphor for loss that's both subtle and crystal clear. "Return to Me" has its flaws, but it's still a joy to see a romantic comedy that understands the value of a light touch. Maybe the Dark Ages are almost over; a new era just might be on the way.