All in Elian's family

The media is holding back on the shady past of the young Cuban refugee's Miami relatives. 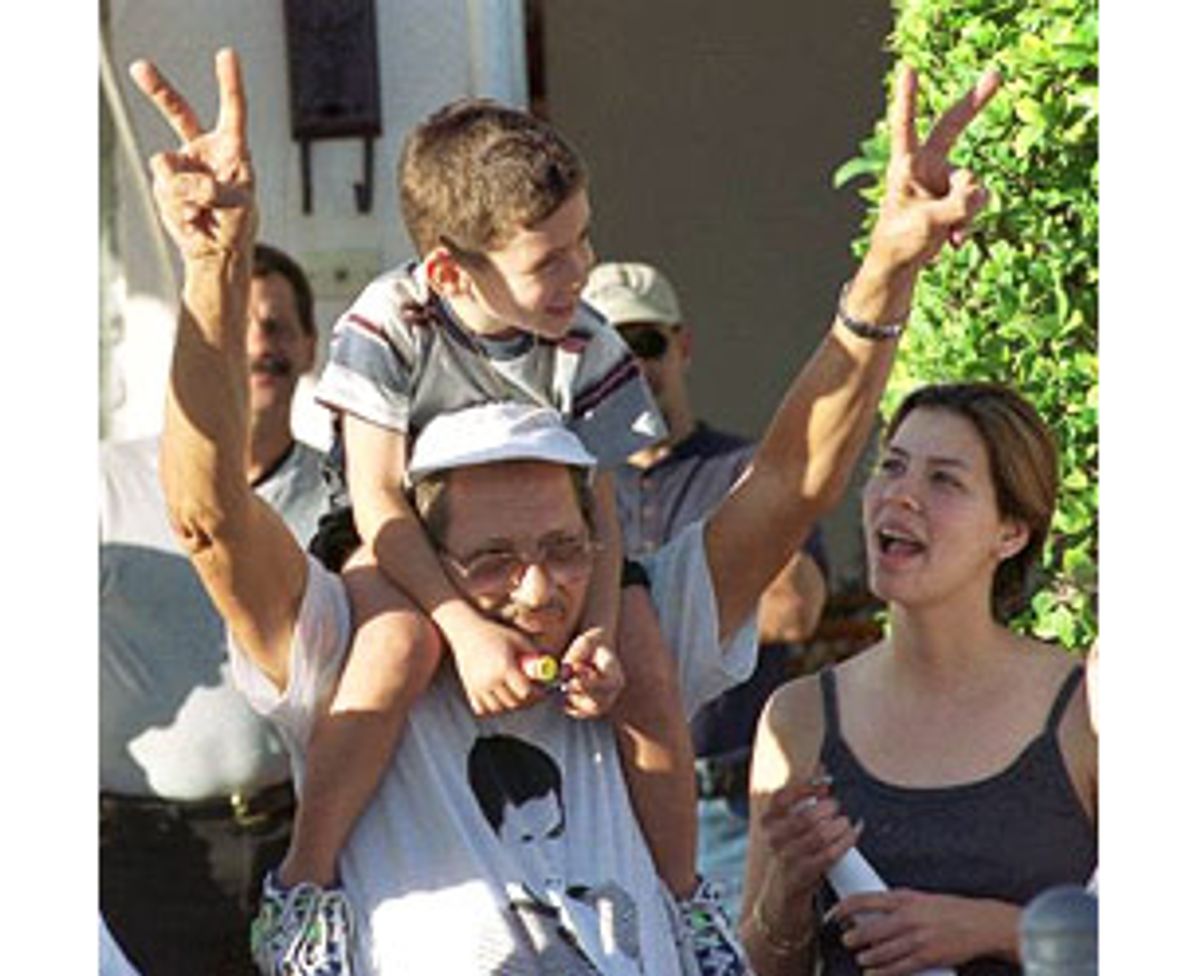 As Elian's odyssey is spun from one insane moment to another by the national media, a majority of angered Miamians, including moderate Cuban-Americans, wonder why pandering national politicians and the media duck the unsavory side of this saga.

Instead, they report reverentially the words of extremist self-appointed Cuban-American exile leaders, no matter how inflammatory and distorted. In the meantime, Elian's Cuban-American relatives are depicted as loving caretakers for stridently disobeying American law and, in effect, kidnapping the child.

When a family lawyer, for example, vowed that Elian's father and the United States government would "rip Elian from the loving arms of his cousin" most of the press did not question anything about the 22-year-old Marisleysis Gonzalez, nicknamed his "surrogate mother." The vision of Gonzalez being taken out on a stretcher, oxygen mask to her face, has become a staple of TV news. Six times since Elian's arrival four months ago, she has been hospitalized for a "nervous stomach" or "emotional anxiety," and just as quickly released. Even last summer, when Elian was an unknown child in Cuba, she collapsed and was admitted to a hospital -- which does not square with the reason her family has given for the episodes, her fear that Elian will be returned to Cuba.

One can certainly sympathize with any emotional problems she may have, and she is no doubt a loving relative, but one has to question what kind of emotional stability she can possibly provide for her 6-year-old charge. Friends have been quoted as saying that she leads the brainwashing brigade, never missing a chance to underscore what a bad life Elian would have in Cuba. And she apparently has scant sensitivity for the emotional well-being of a frightened little boy by letting him watch on TV the scary mess unfolding around him, including rabble-rousers who push through barricades, screaming their "pray for Elian," mantra in front of the family's tiny house in Little Havana.

"Every time he hears that they might pick him up," Gonzalez recounts with a tear in her eye, "he looks at me with open eyes and asks, 'Why are they doing this, when my mom is the one who brought me here?'"

Because family members are ever so accessible and always on camera -- orchestrated by a public-relations man known in Miami for running dirty political campaigns -- the media takes the easy way out and avoids digging. Only after the national press reported their assertions that Elian's father was abusive, for example, did the family admit that they had no proof. The latest propaganda coup was the dramatic exhortation of the surrogate mother who spoke like a Barbara Walters pro when she demanded of a TV crew "I want to go live!" to attack the INS, just hours before she was hospitalized again. Marisleysis' background is important to report because she is a heavy player in the fight; family lawyers stopped negotiations during her latest hospital episode.

To their credit, however, the Gonzalez family has turned down numerous monetary requests to get the "inside" story, but they have done little to protect him from the terrifying glare of publicity, including providing photo-ops of his bedroom.

In what passes for news these days on television, we can always count on Chris Matthews and his appetite for the inflammatory and selective. This time he interviewed the locals from a nice "neutral" place for his show "Hardball," a cafe in Little Havana. And Diane Sawyer's three-part series depicted the Miami relatives sympathetically, with little regard to their rough history. It has been so well buried, in fact, that many people in other parts of the country are astounded when they learn of it.

So what kind of Miami relatives surround Elian? Both of his two great uncles, including Lazaro who seeks custody of Elian, have two DUIs with inebriation levels that shot through the roof. (This fact has received only brief mention in the national press and appeared in only five stories out of scores on the Elian case in the Miami Herald. The Herald, more often a cheerleader than a fact finder when it comes to Cuban-Americans, was in the embarrassing position of having to attribute this story to the New York Times.)

The blood level of Elian's 49-year-old great uncle, Lazaro, was at more than twice the legal limit when he was arrested for drunken driving in 1993, after police spotted him swerving between lanes. Officers noted that he "had extreme poor balance, red, glossy bloodshot eyes [and] slurred speech [and he] was in a total daze" when next arrested in 1997. (A previous conviction came in 1991, but court records for DUIs are no longer available dating back that far.)

His brother, Delfin, a frequent visitor to the house of Elian and a major player in the custody battle, was so drunk that he was arrested driving the wrong way in traffic on a main thoroughfare, resulting in one of his two convictions. Brenda Shapiro, who has served as a juvenile guardian in numerous family custody disputes, stressed that Lazaro's drunken-driving convictions should give one pause in a custody battle. If she were the attorneys for Elian's father, she said, "I would make it clear that I wouldn't want my child riding with him."

Twin cousins who used to visit Elian disappeared from the photo-ops after it was revealed by the Miami New Times that, at the age of 32, both men have multiple felony arrests. Cid, the son of Lazaro's sister, faded from sight when it became known that he was awaiting trial for allegedly assaulting a tourist last fall. Cid was arrested hiding under a car next to two gold necklaces he had allegedly ripped from the neck of a tourist after hitting him over the head while an accomplice held his arms. Throughout the '90s he was in trouble with the law. Cid was arrested on felony charges of carrying a concealed weapon and violently resisting arrest and later on felony firearms and prowling charges. In 1994, his ex-wife sought a permanent injunction against him alleging domestic violence and sued him for child support a year later. His brother, Jose, was arrested at least five times in four years on felony charges including burglary, grand theft and robbery and another time on charges of petty larceny.

The family's spokesman, Gutierrez, kissed off the cousins' extensive criminal records by saying "everybody has somebody in their family who was a troublemaker." So much for the man who is seen hovering over Elian, coaching him to raise his fingers in a V for victory sign when the cameras roll.

The pandering pilgrimage of local and national politicians (many of whom have accepted contributions from the Cuban American National Foundation, the lead organization of the Elian battle) has increased weekly. Now, Vice President Al Gore has sunk to a dismal low by waffling on what should be an absolute. Most Democratic leaders in Florida feel there are not enough votes from the extreme exile community, who dominate the Elian fiasco but by no means control all of the 800,000 Cuban-Americans in Dade County, to make the risk of evoking animus in Gore's hardcore base of white, non-Hispanics statewide worthwhile.

If he were from any other country, Elian would have been sent home to his only surviving parent on the fastest jet possible last November. Instead, Elian has been made the poster boy for religious fanatics who claim that he was a miracle brought to them from the waters -- a young Moses or Jesus borne to them from an evil land. Reports of the family seeing the Virgin Mary in their mirrors -- as well as the Virgin of Guadalupe -- have spread like brush fire.

As for the rest of Miami whose views seldom get reported, including the many Cuban-Americans who abhor the tactics of far-right Cubans, the buzz echoes the majority of Americans: "The boy should go back to his father." From cabdrivers, bus drivers and maids to doctors, lawyers and businessmen, they register disgust with the handling of this case. You hear it from struggling Honduran-American maids and you hear it from rich Cuban-American businessmen. Democrats are furious at Gore, as much for what they see as his political stupidity as for his pandering. Most Democratic leaders in Florida feel there are not enough votes or campaign contributions for even the most cynical Democratic hopeful to sacrifice principle.

This is a polyglot city and county made up of African-Americans, non-Hispanic whites, Haitians and people from all parts of Latin America. This is a state filled with anger at the way some elements of the Cuban-American community have flouted laws and disregarded the First Amendment from the moment they received the amazing perk of being able to pass citizenship tests in Spanish. They were certainly the major beneficiaries of U.S. Cold War policies.

The schism has never been deeper between right-wing Cuban-Americans and the rest of Miami (which includes moderate Cubans), and the repercussions may be lasting. A young Cuban-American businessman voiced a concern expressed by many that the image of Miami is now so bad that corporations won't locate here.

The actions of a fanatic few are nothing new for Miamians. Take, for example, a benighted and financially ruinous local statute that prohibits Cuba from profiting from any transactions here.

Last fall, 3,000 Miamians, including many Cuban-Americans, attending a concert with Cuban musicians had to run a gantlet of protestors, who spit at them and hurled rocks, bottles and obscenities. The first site for the concert pulled out after a bomb was thrown at a restaurant run by the concert promoter. Bowing to that kind of pressure, the city lost a chance to host the Latin American Grammy Awards.

And just this February, the city threatened to cancel a large grant to the Miami Film Festival because it included a film made in Cuba, which was, ironically, critical of Castro. In the '80s, a bomb was thrown through an art museum here because it included art by Cuban painters. In the '70s, it was worse: People had their houses bombed and legs blown off by car bombs for suggesting even a dialogue with Castro.

Now, with the most hysterical protestors vowing death before allowing Elian to return to Cuba, it's no wonder the boy's father is wary of traveling to Miami to pick up his son.

As the world sees a defiant Miami-Dade County Mayor Alex Panelas saying he would not help out the feds if they came to take Elian away and other Florida politicians in supplication to the protestors, this is not an unreasonable concern. (Indeed, as this story was edited Friday afternoon, I stood by with other fuming passengers who missed their flights because the police blocked lanes into the Miami airport in expectation of a protest that was, in the end, called off.)

While the fate of Elian is the volcanic sensation of the moment, there is dij` vu for Miamians. Cuban-American politicians have soothed the protestors and allowed them to snarl traffic with their human barricades in the past as well.

And for the child at the center of this heartbreaking saga, there can be nothing but hope that it ends soon and with as little added turmoil as possible. The extent of damage to him may never be known.