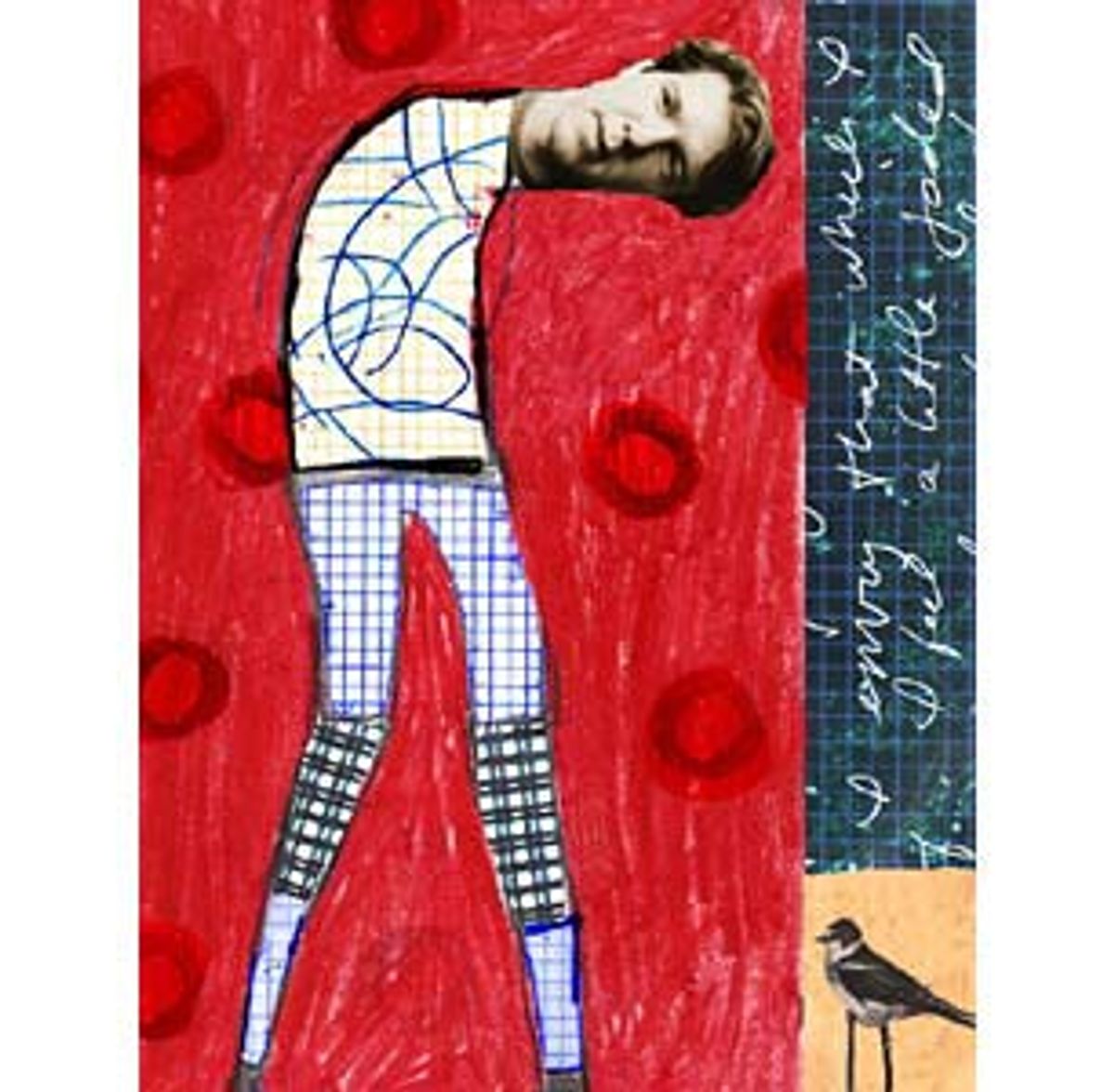 It was the New York book party to be at last month. The divine Katie Couric was there in her Manolo Blahniks, Peter Jennings, too, relaxed and smiling -- the two TV stars graciously mingling in the crowd of literary types. This year's National Book Critics Circle prizewinner for fiction, Jonathan Lethem, and legendary editor Nan Talese were there, the head of the Natural History Museum, too -- everyone drinking expensive liquor and munching on shiitake beggar's purses in the lower lobby of the Whitney Museum. The Doubleday authors being launched at the party were easy to pick out of the crowd: kind of dressed up, a little awkward, but happy, too, basking in the glow of the book party. The only author from Doubleday's lineup who was conspicuously absent was Robert Bingham, or thelaterobertbingham, as they referred to him all night. Rob died of a heroin overdose in November at age 33 while the galleys of his first novel were sitting on his desk.

You couldn't help imagining Rob at this party, a little nervous, probably a little tight, embarrassed at the goofy gimmicks the Doubleday people foisted on the crowd -- first a painful reading and then a spelling bee ("That's rrright!" Jennings' Canadian tenor boomed through the Whitney's lobby when someone got "lepidopterist" on the first try) -- but proud, too. After all, his first and only novel, "Lightning on the Sun," doesn't need any gimmicks to sell it. It's the real thing -- intense, poetic, infinitely sad and compelling. Even where the book, a thriller set mostly in Southeast Asia, stumbles it's still interesting, much like Rob's brilliant and inexplicably overlooked book of short stories, "Pure Slaughter Value," published in 1997.

"I bumped into Bingham a lot, at book parties, you know, and I always thought he was kind of annoying, like one of those trust-fund kids who think they own the world," a young novelist at the Doubleday party said to me. Well, yeah. Rob was the scion of a mythic Southern newspaper family and had a mind-bogglingly huge trust fund -- granted, more mind-boggling in the days before dot.com bazillionaires roamed the Earth, but still, he had a lot of money. Plus his blood was about as blue as it gets in America; he was overprivileged and then some. But he was also blessed, or cursed, depending on how you look at it, with unusually acute insight, the kind of intense psychological sensitivity that makes people like Oedipus poke their own eyes out. He saw into the people around him and most of all deep into his own soul, and wrote it down as best as he could.

Rob also understood that having all that money did make him different -- and in many ways an unsympathetic, threatening person to almost everyone he met. The stench of filthy lucre permeated his writing, his humor, his insights into his characters, politics, literature and the complex and fragile emotional webs that friends and lovers weave around one another. There wasn't a relationship Rob wrote about in his short stories or in "Lightning on the Sun" that wasn't profoundly affected by money. Much like a Marxist revolutionary, Rob reckoned that very few human interactions were unscathed by the power of capital.

Rob chose to use people's complex and often overwhelming emotional reactions to great wealth as material for his art. And as tempting as it is to make the comparison, Rob's writing was not Fitzgeraldian in style or content. There is no room for lightness or hope, charm or melancholy, in Rob's view of money. Money and the desire for it loom threateningly over his characters, propelling them into physical and moral danger, relentlessly exposing them in all their vainglory and emotional fragility. The idea that money leads to death (both literal and emotional) is most explicit in "Lightning on the Sun" and in a brilliantly subtle short story, "The Other Family," that Rob first published in the New Yorker when he was only 26. But even in his other stories, where money is not an overt presence, there is a pervasive despair, sometimes broken by humor or farce, that characters who want for nothing materially are unable to be happy.

But not only was Rob different from you and me, he was also different from other rich people. He was without a snobbish bone in his body, able to empathize with people completely different from himself and extraordinarily (one might say compulsively) generous with anyone he loved, believed in, pitied, admired or was flattered by persistently enough. Unlike the very few other very rich people I have met, Rob was not rigid or conservative; he did not require that a private school admissions committee or a family retainer screen the people he met, worked with, slept with, befriended and became vulnerable to.

He valued artistic talent and ambition, courage, intelligence, humor and athletic prowess. He was fascinated by archaeology and funded digs in Crete, and wrote in the New Yorker about the brutalizing of Cambodia's Angkor Wat by dealers in black market antiquities. The metaphor of archaeology appealed to him on a visceral level; the concept of digging one's way to a buried, obscured truth was exactly how he saw the work of the fiction writer.

This is not to say that Rob didn't have an extremely complex relationship with the trappings of his social class, as evidenced in his writing. Compelled to participate in many of the primal rituals of the upper crust -- like the Head of the Charles (the ur-crew event, an elite international race, something like the Kentucky Derby of crew racing) -- he was often in an obsessive rage over preppiness. He'd show up drunk and snarling, or lusting over grotesquely uptight tennis ladies. He could be found at the Racquet Club, gleefully working off hangovers earned in the sleaziest titty bars in Manhattan, loving and hating his own kind with a vehemence that often freaked out his companions. "That's so fucking prepeee!" he would shout at some event, opinion or person -- and you were never quite sure what exactly he meant.

Rob loved rock music and his aesthetic sensibility was punk, vintage East Coast, early 1980s. As an artist (and person) he was much closer to, say, Dee Dee Ramone than to people like Michael Chabon or Jeffrey Eugenides (writers whom he has been compared to). He adored the work of Robert Stone, Dylan Thomas and Graham Greene but he reveled in Pavement. Rob believed that what he was looking for could be found in the hardest, ugliest places in our culture and psyche. And when he couldn't stand what he saw there, he sought escape in pure adrenaline-saturated sensation by (for just a few examples) driving too fast, moshing too enthusiastically at hardcore shows, inserting himself into politically unstable Third World countries, telling people what he thought of them to their faces, gambling huge sums of money, shooting guns and taking drugs.

Rob's particular sense of humor, with its finely tuned and occasionally sophisticated appreciation for the bizarre, the revolting and the absurd, was often manifested in the literary journal Open City, which he co-founded and bankrolled. Open City was a witty, provocative and often dark magazine that published exactly what Rob and his co-editors, writers Tom Beller and Daniel Pinchbeck, really loved and nothing else. Like Gertrude Stein on the Rue des Fleurus, Rob delighted almost as much in discovering new counterculture talent -- and encouraging and promoting it -- as he did in working on his own writing.

A memory of Rob: It is summer and we are visiting him in Nantucket, at his beautiful wide-gabled house that sits alone in the midst of acres and acres of rose-hip- and sea-grass-covered dunes, looking out at the brooding Atlantic. We have been listening to Pavement at full blast all weekend, drinking too much, arguing about fiction and playing endless backgammon games. Rob is wearing a black knitted watch cap, cat-burglar style, and has a cashmere blanket wrapped around his shoulders in a "homage" to the insanely annoying pashmina.

Rob, a committed Democrat who routinely donated tens of thousands of dollars to the Democratic National Committee, has his rifle hoisted in the air and is explaining to us, at the top of his lungs, about Al Gore's electability problem: "Gore is a fucking fake Southerner, just like me. He has no fucking clue about anyone who didn't go to fucking St. Alban's!" He then clomps downstairs into the dark Nantucket night and shoots Heineken cans off the fence until his girlfriend, the thoughtful Vanessa, persuades him he might hit someone barbecuing on the beach.

It is hard to know how to convey Rob without flattening him. Like most people who are worth knowing, he was many contradictory people at once, some of them appealing, some of them loathsome. He struggled with alcohol addiction for most of his adult life and most recently with heroin. He could be a vicious drunk, too, spewing devastating remarks at his friends and then disappearing before they could respond. Alcohol seemed to eliminate his understanding of limits, both physical and emotional. Drunk, Rob tended to be terrifyingly self-destructive. However, he did not mean to die last November. He had "Lightning on the Sun" in galleys, he had just gotten married that summer to his longtime girlfriend, he was ready to take off. Rob was an infrequent heroin user -- "chippers," they're called -- who was just terribly unlucky, and alone, one night.

Rob's most distinctive quality, for me, in his art and life was his ambition to convey what he really felt, poetically and realistically. His work was sometimes brilliant and not always successful, but it was never about the bland, self-conscious cleverness that is the hallmark of so much of the writing of his contemporaries. He dared to reveal himself in his fiction and, for that matter, often in the first five minutes you knew him.

Rob was just beginning. His talent, and his life, were only in bud. He wrote two excellent books, but he would have written more; he would have dug even deeper and rocked the house with his brilliance, his humor and his magnificent voice.